Free Soil or Slave? The Dilemma of the West

The 1848 treaty with Mexico did not bring the United States domestic peace. Instead, the acquisition of new territory revived and intensified the debate over the future of slavery in the western territories, widening the growing division between North and South and leading to the creation of new single-issue parties. Increasingly, the South came to regard itself as under attack by radical northern abolitionists, and many northerners began to speak ominously of a southern drive to dominate American politics for the purpose of protecting slaveholders’ human property. As tensions mounted and both sides hurled accusations, national unity frayed. Compromise became nearly impossible and antagonistic sectional rivalries replaced the idea of a unified, democratic republic.

THE LIBERTY PARTY, THE WILMOT PROVISO, AND THE ANTISLAVERY MOVEMENT

Committed to protecting white workers by keeping slavery out of the lands taken from Mexico, Pennsylvania congressman David Wilmot attached to an 1846 revenue bill an amendment that would prohibit slavery in the new territory. The Wilmot Proviso was not entirely new. Other congressmen had drafted similar legislation, and Wilmot’s language was largely copied from the 1787 Northwest Ordinance that had banned slavery in that territory. His ideas were very controversial in the 1840s, however, because his proposals would prevent American slaveholders from bringing what they viewed as their lawful property, their slaves, into the western lands. The measure passed the House but was defeated in the Senate. When Polk tried again to raise revenue the following year (to pay for lands taken from Mexico), the Wilmot Proviso was reintroduced, this time calling for the prohibition of slavery not only in the Mexican Cession but in all U.S. territories. The revenue bill passed, but without the proviso.

That Wilmot, a loyal Democrat, should attempt to counter the actions of a Democratic president hinted at the party divisions that were to come. The 1840s were a particularly active time in the creation and reorganization of political parties and constituencies, mainly because of discontent with the positions of the mainstream Whig and Democratic Parties in regard to slavery and its extension into the territories. The first new party, the small and politically weak Liberty Party founded in 1840, was a single-issue party, as were many of those that followed it. Its members were abolitionists who fervently believed slavery was evil and should be ended, and that this was best accomplished by political means.

The Wilmot Proviso captured the “antislavery” sentiments during and after the Mexican War. Antislavery advocates differed from the abolitionists. While abolitionists called for the end of slavery everywhere, antislavery advocates, for various reasons, did not challenge the presence of slavery in the states where it already existed. Those who supported antislavery fervently opposed its expansion westward because, they argued, slavery would degrade white labor and reduce its value, cast a stigma upon hard-working whites, and deprive them of a chance to advance economically. The western lands, they argued, should be open to white men only—small farmers and urban workers for whom the West held the promise of economic advancement. Where slavery was entrenched, according to antislavery advocates, there was little land left for small farmers to purchase, and such men could not compete fairly with slaveholders who held large farms and gangs of slaves. Ordinary laborers suffered also; no one would pay a white man a decent wage when a slave worked for nothing. When labor was associated with loss of freedom, antislavery supporters argued, all white workers carried a stigma that marked them as little better than slaves.

Wilmot opposed the extension of slavery into the Mexican Cession not because of his concern for African Americans, but because of his belief that slavery hurt white workers, and that lands acquired by the government should be used to better the position of white small farmers and laborers. Work was not simply something that people did; it gave them dignity, but in a slave society, labor had no dignity. In response to these arguments, southerners maintained that laborers in northern factories were treated worse than slaves. Their work was tedious and low paid. Their meager income was spent on inadequate food, clothing, and shelter. There was no dignity in such a life. In contrast, they argued, southern slaves were provided with a home, the necessities of life, and the protection of their masters. Factory owners did not care for or protect their employees in the same way.

THE FREE-SOIL PARTY AND THE ELECTION OF 1848

The Wilmot Proviso was an issue of great importance to the Democrats. Would they pledge to support it? At the party’s New York State convention in Buffalo, Martin Van Buren’s antislavery supporters—called Barnburners because they were likened to farmers who were willing to burn down their own barn to get rid of a rat infestation—spoke in favor of the proviso. Their opponents, known as Hunkers, refused to support it. Angered, the Barnburners organized their own convention, where they chose antislavery, pro–Wilmot Proviso delegates to send to the Democrats’ national convention in Baltimore. In this way, the controversy over the expansion of slavery divided the Democratic Party.

At the national convention, both sets of delegates were seated—the pro-proviso ones chosen by the Barnburners and the anti-proviso ones chosen by the Hunkers. When it came time to vote for the party’s presidential nominee, the majority of votes were for Lewis Cass, an advocate of popular sovereignty. Popular sovereignty was the belief that citizens should be able to decide issues based on the principle of majority rule; in this case, residents of a territory should have the right to decide whether slavery would be allowed in it. Theoretically, this doctrine would allow slavery to become established in any U.S. territory, including those from which it had been banned by earlier laws. 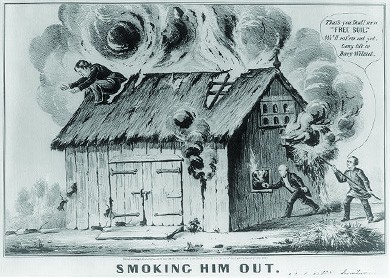 This political cartoon depicts Martin Van Buren and his son John, both Barnburners, forcing the slavery issue within the Democratic Party by “smoking out” fellow Democrat Lewis Cass on the roof. Their support of the Wilmot Proviso and the new Free-Soil Party is demonstrated by John’s declaration, “That’s you Dad! more ‘Free-Soil.’ We’ll rat ‘em out yet. Long life to Davy Wilmot.” (credit: Library of Congress)

Disgusted by the result, the Barnburners united with antislavery Whigs and former members of the Liberty Party to form a new political party—the Free-Soil Party, which took as its slogan “Free Soil, Free Speech, Free Labor, and Free Men.” The party had one real goal—to oppose the extension of slavery into the territories. In the minds of its members and many other northerners of the time, southern slaveholders had marshaled their wealth and power to control national politics for the purpose of protecting the institution of slavery and extending it into the territories. Many in the Free-Soil Party believed in this far-reaching conspiracy of the slaveholding elite to control both foreign affairs and domestic policies for their own ends, a cabal that came to be known as the Slave Power.

In the wake of the Mexican War, antislavery sentiment entered mainstream American politics when the new Free-Soil party promptly selected Martin Van Buren as its presidential candidate. For the first time, a national political party committed itself to the goal of stopping the expansion of slavery. The Democrats chose Lewis Cass, and the Whigs nominated General Zachary Taylor, as Polk had assumed they would. On Election Day, Democrats split their votes between Van Buren and Cass. With the strength of the Democratic vote diluted, Taylor won. His popularity with the American people served him well, and his status as a slaveholder helped him win the South.

Visit the archives of the Gilder Lehrman Institute to read an August 1848 letter from Gerrit Smith, a staunch abolitionist, regarding the Free-Soil candidate, Martin Van Buren. Smith played a major role in the Liberty Party and was their presidential candidate in 1848.

The election of 1848 did nothing to quell the controversy over whether slavery would advance into the Mexican Cession. Some slaveholders, like President Taylor, considered the question a moot point because the lands acquired from Mexico were far too dry for growing cotton and therefore, they thought, no slaveholder would want to move there. Other southerners, however, argued that the question was not whether slaveholders would want to move to the lands of the Mexican Cession, but whether they could and still retain control of their slave property. Denying them the right to freely relocate with their lawful property was, they maintained, unfair and unconstitutional. Northerners argued, just as fervidly, that because Mexico had abolished slavery, no slaves currently lived in the Mexican Cession, and to introduce slavery there would extend it to a new territory, thus furthering the institution and giving the Slave Power more control over the United States. The strong current of antislavery sentiment—that is, the desire to protect white labor—only increased the opposition to the expansion of slavery into the West.

Most northerners, except members of the Free-Soil Party, favored popular sovereignty for California and the New Mexico territory. Many southerners opposed this position, however, for they feared residents of these regions might choose to outlaw slavery. Some southern politicians spoke ominously of secession from the United States. Free-Soilers rejected popular sovereignty and demanded that slavery be permanently excluded from the territories.

Beginning in January 1850, Congress worked for eight months on a compromise that might quiet the growing sectional conflict. Led by the aged Henry Clay, and pushed through as separate items by Illinois Congressman Stephen Douglas, members finally agreed to the following:

1. California, which was ready to enter the Union, was admitted as a free state in accordance with its state constitution.
2. Popular sovereignty was to determine the status of slavery in New Mexico and Utah, even though Utah and part of New Mexico were north of the Missouri Compromise line.
3. The slave trade was banned in the nation’s capital. Slavery, however, was allowed to remain.
4. Under a new fugitive slave law, those who helped runaway slaves or refused to assist in their return would be fined and possibly imprisoned.
5. The border between Texas and New Mexico was established; Texas received $15 million dollars in exchange for the loss of lands to New Mexico.

The Compromise of 1850 brought temporary relief. It resolved the issue of slavery in the territories for the moment and prevented secession. The peace would not last, however. Instead of relieving tensions between North and South, it had actually made them worse.

The acquisition of lands from Mexico in 1848 reawakened debates regarding slavery. The suggestion that slavery be barred from the Mexican Cession caused rancorous debate between North and South and split the Democratic Party when many northern members left to create the Free-Soil Party. Although the Compromise of 1850 resolved the question of whether slavery would be allowed in the new territories, the solution pleased no one. The peace brought by the compromise was short-lived, and the debate over slavery continued.

Free-Soil Party a political party that sought to exclude slavery from the western territories, leaving these areas open for settlement by white farmers and ensuring that white laborers would not have to compete with slaves