As transformative as steam and iron had been in the previous century, gasoline and electricity—embodied most dramatically for many Americans in automobiles, film, and radio—propelled not only consumption, but also the famed popular culture in the 1920s. “We wish to escape,” wrote Edgar Burroughs, author of the Tarzan series. “The restrictions of manmade laws, and the inhibitions that society has placed upon us.” Burroughs authored a new Tarzan story nearly every year from 1914 until 1939. “We would each like to be Tarzan,” he said. “At least I would; I admit it.” Like many Americans in the 1920s, Burroughs sought to challenge and escape the constraints of a society that seemed more industrialized with each passing day.

Just like Burroughs, Americans escaped with great speed. Whether through the automobile, Hollywood’s latest films, jazz records produced on Tin Pan Alley, or the hours spent listening to radio broadcasts of Jack Dempsey’s prizefights, the public wrapped itself in popular culture. One observer estimated that Americans belted out the silly musical hit “Yes, We Have No Bananas” more than “The Star Spangled Banner” and all the hymns in all the hymnals combined.

As the automobile became more popular and more reliable, more people traveled more frequently and attempted greater distances. Women increasingly drove themselves to their own activities as well as those of their children. Vacationing Americans sped to Florida to escape northern winters. Young men and women fled the supervision of courtship, exchanging the staid parlor couch for sexual exploration in the backseat of a sedan. In order to serve and capture the growing number of drivers, Americans erected gas stations, diners, motels, and billboards along the roadside. Automobiles themselves became objects of entertainment: nearly one hundred thousand people gathered to watch drivers compete for the $50,000 prize of the Indianapolis 500. 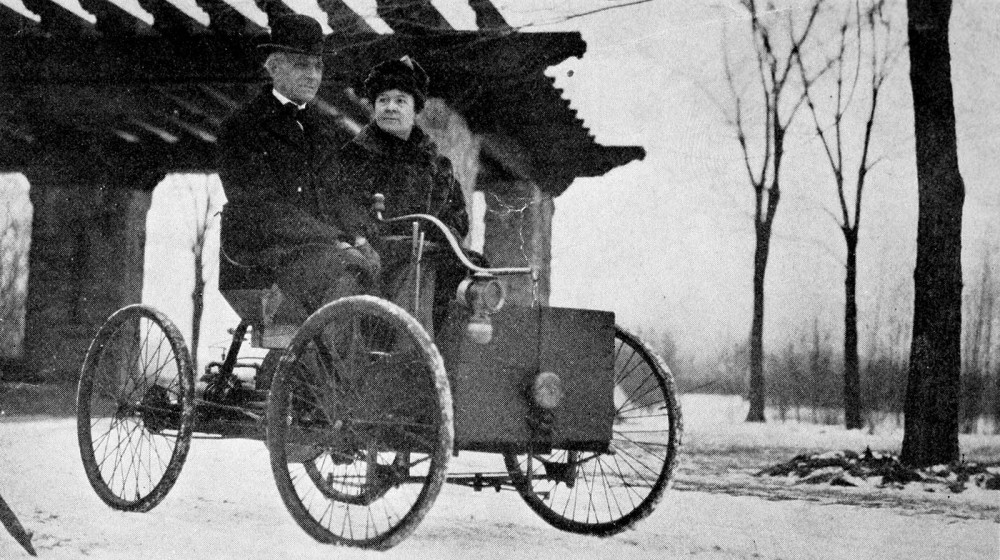 The automobile changed American life forever. Rampant consumerism, the desire to travel, and the affordability of cars allowed greater numbers of Americans to purchase automobiles. This was possible only through innovations in automobile design and manufacturing led by Henry Ford in Detroit, Michigan. Ford was a lifelong inventor, creating his very first automobile—the quadricycle—in his home garage. From The Truth About Henry Ford by Sarah T. Bushnell, 1922. Wikimedia.

Meanwhile, the United States dominated the global film industry. By 1930, as movie-making became more expensive, a handful of film companies took control of the industry. Immigrants, mostly of Jewish heritage from Central and Eastern Europe, originally “invented Hollywood” because most turn-of-the-century middle and upper class Americans viewed cinema as lower-class entertainment. After their parents emigrated from Poland in 1876, Harry, Albert, Sam, and Jack Warner (who were given the name when an Ellis Island official could not understand their surname) founded Warner Bros. in 1918. Universal, Paramount, Columbia, and MGM were all founded by or led by Jewish executives. Aware of their social status as outsiders, these immigrants (or sons of immigrants) purposefully produced films that portrayed American values of opportunity, democracy, and freedom.

Not content with distributing thirty-minute films in nickelodeons, film moguls produced longer, higher-quality films and showed them in palatial theaters that attracted those who had previously shunned the film industry. But as filmmakers captured the middle and upper classes, they maintained working-class moviegoers by blending traditional and modern values. Cecil B. DeMille’s 1923 epic The Ten Commandments depicted orgiastic revelry, for instance, while still managing to celebrate a biblical story. But what good was a silver screen in a dingy theater? Moguls and entrepreneurs soon constructed picture palaces. Samuel Rothafel’s Roxy Theater in New York held more than six thousand patrons who could be escorted by a uniformed usher past gardens and statues to their cushioned seat. In order to show The Jazz Singer (1927), the first movie with synchronized words and pictures, the Warners spent half a million to equip two theaters. “Sound is a passing fancy,” one MGM producer told his wife, but Warner Bros.’ assets, which increased from just $5,000,000 in 1925 to $230,000,000 in 1930, tell a different story.

Americans fell in love with the movies. Whether it was the surroundings, the sound, or the production budgets, weekly movie attendance skyrocketed from sixteen million in 1912 to forty million in the early 1920s. Hungarian immigrant William Fox, founder of Fox Film Corporation, declared that “the motion picture is a distinctly American institution” because “the rich rub elbows with the poor” in movie theaters. With no seating restriction, the one-price admission was accessible for nearly all Americans (African Americans, however, were either excluded or segregated). Women represented more than sixty percent of moviegoers, packing theaters to see Mary Pickford, nicknamed “America’s Sweetheart,” who was earning one million dollars a year by 1920 through a combination of film and endorsements contracts. Pickford and other female stars popularized the “flapper,” a woman who favored short skirts, makeup, and cigarettes. 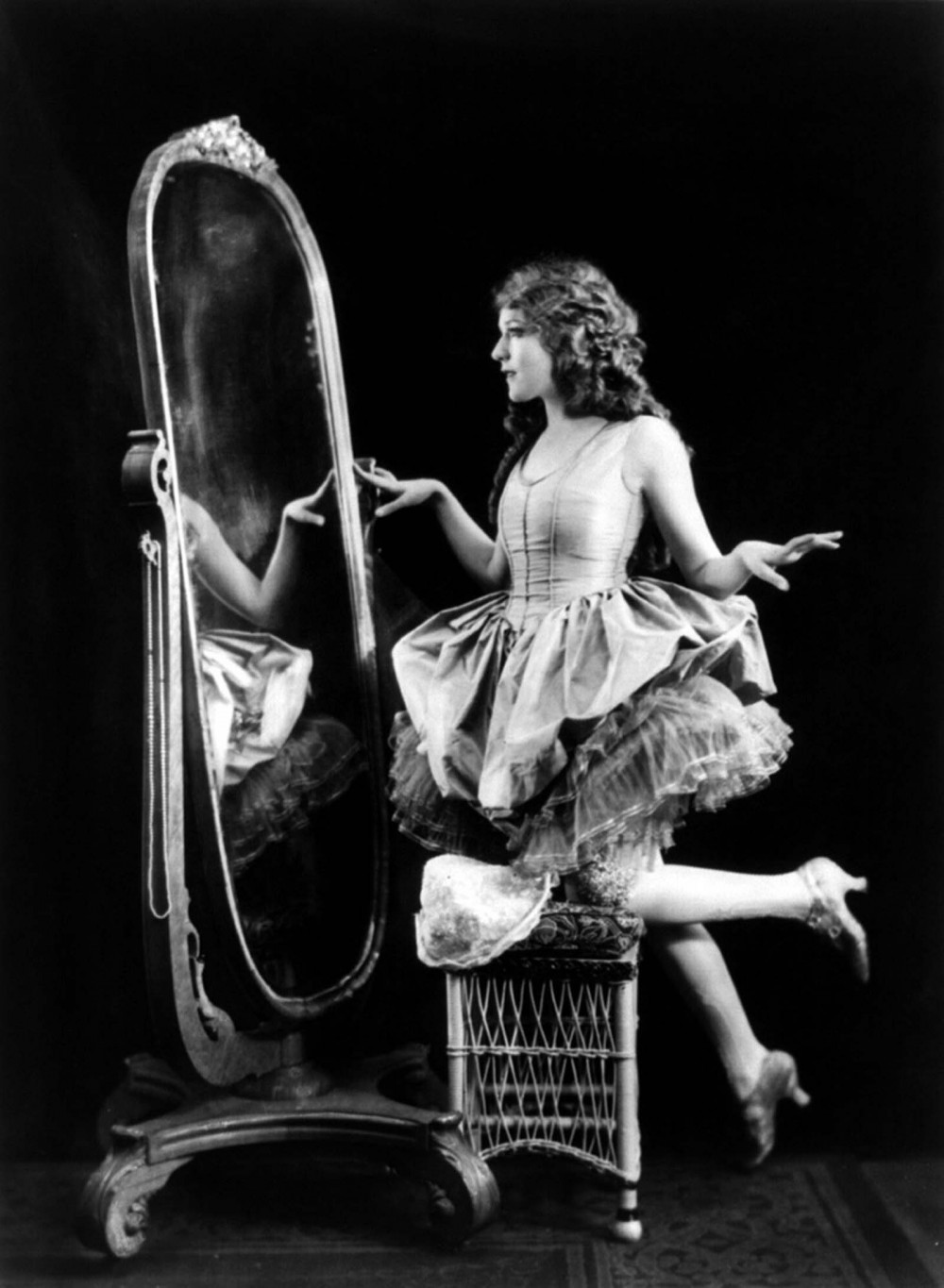 Mary Pickford’s film personas led the glamorous and lavish lifestyle that female movie-goers of the 1920s desired so much. Mary Pickford, 1920. Library of Congress.

As Americans went to the movies more and more, at home they had the radio. Italian scientist Guglielmo Marconi transmitted the first transatlantic wireless (radio) message in 1901, but radios in the home did not become available until around 1920, when they boomed across the country. Around half of American homes contained a radio by 1930. Radio stations brought entertainment directly into the living room through the sale of advertisements and sponsorships, from The Maxwell House Hour to the Lucky Strike Orchestra. Soap companies sponsored daytime drams so frequently that an entire genre—“soap operas”—was born, providing housewives with audio adventures that stood in stark contrast to common chores. Though radio stations were often under the control of corporations like the National Broadcasting Company (NBC) or the Columbia Broadcasting System (CBS), radio programs were less constrained by traditional boundaries in order to capture as wide an audience as possible, spreading popular culture on a national level.

Radio exposed Americans to a broad array of music. Jazz, a uniquely American musical style popularized by the African-American community in New Orleans, spread primarily through radio stations and records. The New York Times had ridiculed jazz as “savage” because of its racial heritage, but the music represented cultural independence to others. As Harlem-based musician William Dixon put it, “It did seem, to a little boy, that . . . white people really owned everything. But that wasn’t entirely true. They didn’t own the music that I played.” The fast-paced and spontaneity-laced tunes invited the listener to dance along. “When a good orchestra plays a ‘rag,’” dance instructor Vernon Castle recalled, “One has simply got to move.” Jazz became a national sensation, played and heard by whites and blacks both. Jewish Lithuanian-born singer Al Jolson—whose biography inspired The Jazz Singer and who played the film’s titular character—became the most popular singer in America. 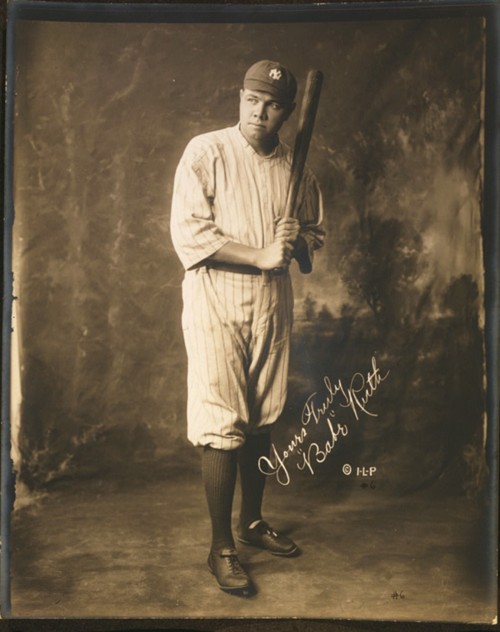 Babe Ruth’s incredible talent attracted widespread attention to the sport of baseball, helping it become America’s favorite pastime. Ruth’s propensity to shatter records with the swing of his bat made him a national hero during a period when defying conventions was the popular thing to do. “[Babe Ruth, full-length portrait, standing, facing slightly left, in baseball uniform, holding baseball bat],” c. 1920. Library of Congress, http://www.loc.gov/pictures/item/92507380/.

The 1920s also witnessed the maturation of professional sports. Play-by-play radio broadcasts of major collegiate and professional sporting events marked a new era for sports, despite the institutionalization of racial segregation in most. Suddenly, Jack Dempsey’s left crosses and right uppercuts could almost be felt in homes across the United States. Dempsey, who held the heavyweight championship for most of the decade, drew million-dollar gates and inaugurated “Dempseymania” in newspapers across the country. Red Grange, who carried the football with a similar recklessness, helped to popularize professional football, which was then in the shadow of the college game. Grange left the University of Illinois before graduating to join the Chicago Bears in 1925. “There had never been such evidence of public interest since our professional league began,” recalled Bears owner George Halas of Grange’s arrival.Perhaps no sports figure left a bigger mark than did Babe Ruth. Born George Herman Ruth, the “Sultan of Swat” grew up in an orphanage in Baltimore’s slums. Ruth’s emergence onto the national scene was much needed, as the baseball world had been rocked by the so-called black Sox scandal in which eight players allegedly agreed to throw the 1919 World Series. Ruth hit fifty-four home runs in 1920, which was more than any other team combined. Baseball writers called Ruth a superman, and more Americans could recognize Ruth than they could then-president Warren G. Harding.After an era of destruction and doubt brought about by the First World War, Americans craved heroes that seemed to defy convention and break boundaries. Dempsey, Grange, and Ruth dominated their respective sport, but only Charles Lindbergh conquered the sky. On May 21, 1927, Lindbergh concluded the first ever non-stop solo flight from New York to Paris. Armed with only a few sandwiches, some bottles of water, paper maps, and a flashlight, Lindbergh successfully navigated over the Atlantic Ocean in thirty-three hours. Some historians have dubbed Lindbergh the “hero of the decade,” not only for his transatlantic journey, but because he helped to restore the faith of many Americans in individual effort and technological advancement. Devastated in war by machine guns, submarines, and chemical weapons, Lindbergh’s flight demonstrated that technology could inspire and accomplish great things. Outlook Magazine called Lindbergh “the heir of all that we like to think is the best in America.”The decade’s popular culture seemed to revolve around escape. Coney Island in New York marked new amusements for young and old. Americans drove their sedans to massive theaters to enjoy major motion pictures. Radio towers broadcasted the bold new sound of jazz, the adventure of soap operas, and the feats of amazing athletes. Dempsey and Grange seemed bigger, stronger, and faster than any who dared to challenge them. Babe Ruth smashed home runs out of ball parks across the country. And Lindbergh escaped earth’s gravity and crossed entire oceans. Neither Dempsey nor Ruth nor Lindbergh made Americans forget the horrors of the First World War and the chaos that followed, but they made it seem as if the future would be that much brighter.