To deliver on his promises of stability and prosperity, Harding signed legislation to restore a high protective tariff and dismantled the last wartime controls over industry. Meanwhile, the vestiges of America’s involvement in the First World War and its propaganda and suspicions of anything less than “100 percent American,” pushed Congress to address fears of immigration and foreign populations. A sour postwar economy led elites to raise the specter of the Russian Revolution and sideline not just the various American socialist and anarchist organizations, but nearly all union activism. During the 1920s, the labor movement suffered a sharp decline in memberships. Workers not only lost bargaining power, but also the support of courts, politicians, and, in large measure, the American public.

Harding’s presidency, though, would go down in history as among the most corrupt. Many of Harding’s cabinet appointees, for instance, were individuals of true stature that answered to various American constituencies. For instance, Henry C. Wallace, the very vocal editor of Wallace’s Farmer and a well-known proponent of “scientific farming,” was made Secretary of Agriculture. Herbert Hoover, the popular head and administrator of the wartime Food Administration and a self-made millionaire, was made Secretary of Commerce. To satisfy business interests, the conservative businessmen Andrew Mellon became Secretary of the Treasury. Mostly, however, it was the appointing of friends and close supporters, dubbed “the Ohio gang,” that led to trouble.

Harding’s administration suffered a tremendous setback when several officials conspired to lease government land in Wyoming to oil companies in exchange for cash. Known as the Teapot Dome scandal (named after the nearby rock formation that resembled a teapot), Interior Secretary Albert Fall and Navy Secretary Edwin Denby were eventually convicted and sent to jail. Harding took vacation in the summer of 1923 so that he could think deeply on how to deal “with my God-damned friends”—it was his friends, and not his enemies, that kept him up walking the halls at nights. But then, on August of 1923, Harding died suddenly of a heart attack and Vice President Calvin Coolidge ascended to the highest office in the land.

The son of a shopkeeper, Coolidge climbed the Republican ranks from city councilman to the Governor of Massachusetts. As president, Coolidge sought to remove the stain of scandal but he otherwise continued Harding’s economic approach, refusing to take actions in defense of workers or consumers against American business. “The chief business of the American people,” the new President stated, “is business.” One observer called Coolidge’s policy “active inactivity,” but Coolidge was not afraid of supporting business interests and wealthy Americans by lowering taxes or maintaining high tariff rates. Congress, for instance, had already begun to reduce taxes on the wealthy from wartime levels of sixty-six percent to twenty percent, which Coolidge championed.

While Coolidge supported business, other Americans continued their activism. The 1920s, for instance, represented a time of great activism among American women, who had won the vote with the passage of the 19th Amendment in 1920. Female voters, like their male counterparts, pursued many interests. Concerned about squalor, poverty, and domestic violence, women had already lent their efforts to prohibition, which went into effect under the Eighteenth Amendment in January 1920. After that point, alcohol could no longer be manufactured or sold. Other reformers urged government action to ameliorate high mortality rates among infants and children, to provide federal aid for education, and ensure peace and disarmament. Some activists advocated protective legislation for women and children, while Alice Paul and the National Women’s Party called for the elimination of all legal distinctions “on account of sex” through the proposed Equal Rights Amendment (ERA), which was introduced but defeated in Congress. 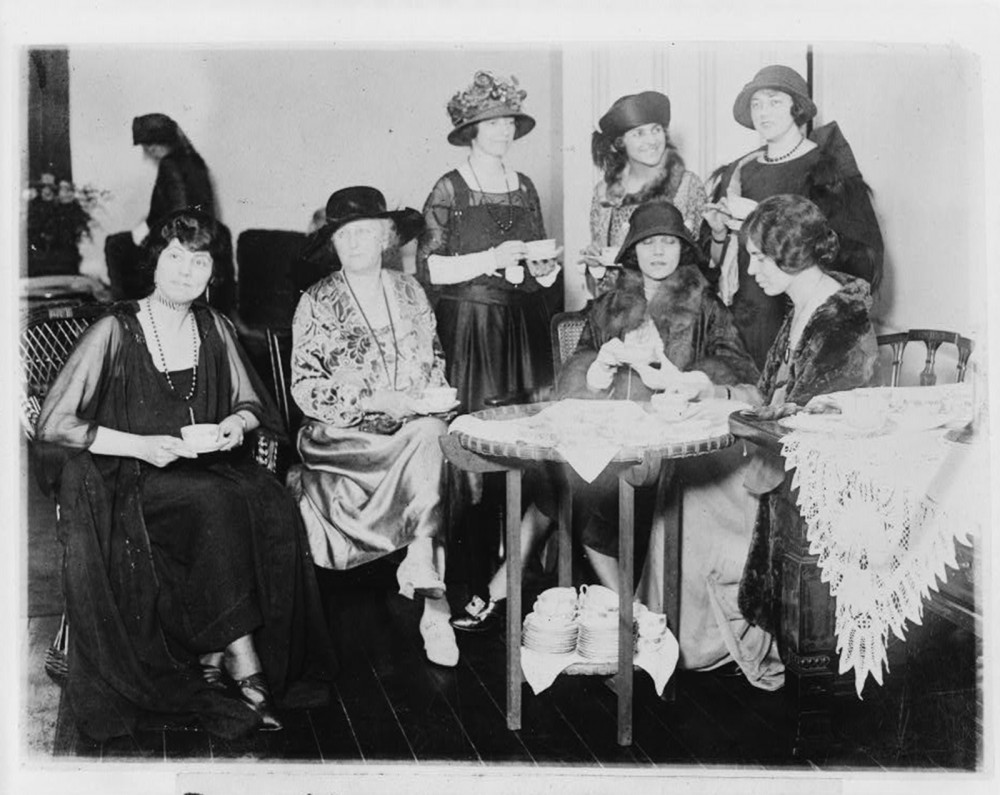 During the 1920s, the National Women’s Party fought for the rights of women beyond that of suffrage, which they had secured through the 19th Amendment in 1920. They organized private events, like the tea party pictured here, and public campaigning, such as the introduction of the Equal Rights Amendment to Congress, as they continued the struggle for equality. “Reception tea at the National Womens [i.e., Woman’s] Party to Alice Brady, famous film star and one of the organizers of the party,” April 5, 1923. Library of Congress.

National politics in the 1920s were dominated by the Republican Party, which not held the presidency but both houses of Congress as well. In a note passed to American reporters, Coolidge announced his decision not to run in the presidential election of 1928. Republicans nominated Herbert Hoover. An orphan from Iowa who graduated from Stanford, became wealthy as a mining engineer, and won a deserved reputation as a humanitarian for his relief efforts in famine-struck, war-torn Europe. Running against Hoover was Democrat Alfred E. Smith, the four-time governor of New York and the son of Irish immigrants. Smith was a part of the New York machine and favored workers’ protections while also opposing prohibition and immigration restrictions. Hoover focused on economic growth and prosperity. He had served as Secretary of Commerce under Harding and Coolidge and claimed credit for the sustained growth seen during the 1920s, Hoover claimed in 1928 that America had never been closer to eliminating poverty. Much of the election, however, centered around Smith’s religion: he was a Catholic. And not only was he a Catholic, he opposed Protestant America’s greatest political triumph, prohibition. Many Protestant ministers preached against Smith and warned that he be enthralled to the Pope. Hoover won in a landslide. While Smith won handily in the nation’s largest cities, portending future political trends, he lost most of the rest of the country. Even several solidly Democratic southern states pulled the lever for a Republican for the first time since Reconstruction.