The Politics of Love, Sex, and Gender 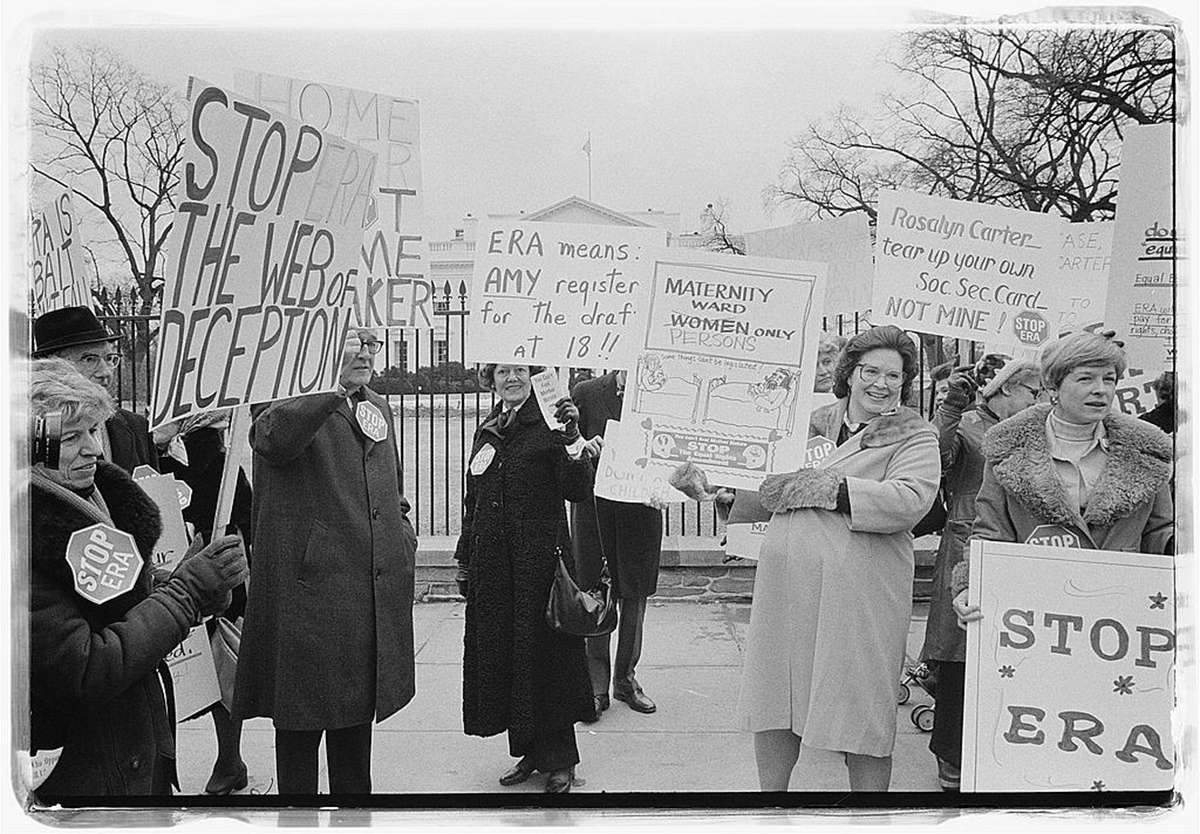 Warren K. Leffler, Demonstrators opposed to the ERA in front of the White House, 1977 via Library of Congress.

Many looked optimistically at what the seventies might offer. Many hoped, like George Clinton’s funk band Funkadelic, that Americans might dance together under a disco glitter ball as “one nation under a groove.” Many Americans—feminists, gay men, lesbians, and married couples across—carried the sexual revolution further. Whether women rejected the monogamy and rigid gender roles at the heart of the nuclear family, American women had fewer children, cohabitation without marriage spiked, straight couples married later (if at all), and divorce levels climbed. Sexuality, decoupled from marriage and procreation, was transformed into a source of personal fulfillment and a worthy political cause.

At the turn of the decade, sexuality was considered a private matter, but one closely linked to civil rights. American law defined legitimate sexual expression within the confines of patriarchal, procreative, middle-class marriage. Interracial marriage was illegal until 1967 and remained largely taboo throughout the 1970s, while government-led sterilization programs threatened the reproductive freedom of poor women of color. Same-sex intercourse and cross-dressing were criminalized in most states, and gay men, lesbians, and transgender people were vulnerable to violent police enforcement as well as discrimination in housing and employment.

Two landmark legal rulings in 1973 established the battle lines for the “sex wars” of the 1970s: First, the Supreme Court’s 7-1 ruling in Roe v. Wadestruck down a Texas law that prohibited abortion in all cases when a mother’s life was not in danger. The Court’s decision built upon precedent from a 1965 ruling that, in striking down a Connecticut law prohibiting married couples from using birth control, recognized a constitutional “right to privacy.” In Roe, the Court reasoned that “this right of privacy . . . is broad enough to encompass a woman’s decision whether or not to terminate her pregnancy.” The Court held that states could not interfere with a woman’s right to an abortion during the first trimester of pregnancy and could only fully prohibit abortions during the third trimester. Other Supreme Court rulings, however, held that sexual privacy could be sacrificed for the sake of “community” good. Another 1973 decision, Miller v. California, held that the first amendment did not protect “obscene” material, defined by the Court as anything with sexual appeal that lacked “serious literary, artistic, political, or scientific value.” The ruling expanded states’ abilities to pass laws prohibiting materials like hardcore pornography. State laws were unevenly enforced, however, and pornographic theaters and sex shops proliferated. Americans debated whether these were immoral atrocities, the “vanguard of a new ‘pansexual’ utopia,” as one bathhouse owner called it, or “the ultimate conclusion of sexist logic,” as poet and lesbian feminist Rita Mae Brown charged.

Furthermore, new laws prohibiting employment discrimination increased opportunities for women to make a living outside of the home and marriage. Women—haltingly and with significant disparities—advanced into traditional male occupations, into politics, and into corporate management.

The seventies saw the reform of divorce law. Between 1959 and 1979 the American divorce rate doubled. Close to half of all marriages formed in the 1970s ending in divorce. The stigma attached to divorce evaporated and American culture encouraged individuals to leave abusive or unfulfilling marriages. Before 1969, most states required one spouse to prove that the other was guilty of a specific offense, such as adultery. The difficulty of getting a divorce under this system encouraged widespread lying in divorce courts. Even couples desiring an amicable split were sometimes forced to claim that one spouse had cheated on the other even if neither (or both) had. Other couples temporarily relocated to states with more lenient divorce laws, such as Nevada. Widespread recognition of such practices prompted reforms. In 1969, California adopted the first no-fault divorce law. By the end of the 1970s, almost every state had adopted some form of no-fault divorce. The new laws allowed for divorce on the basis of “irreconcilable differences,” even if only one party felt that he or she could not stay in the marriage.

As straight couples eased the bonds of matrimony, gay men and women negotiated a harsh world that stigmatized homosexuality as a mental illness or depraved immoral act. Building upon postwar efforts by gay rights organizations to bring homosexuality into the mainstream of American culture, young gay activists of the late sixties and seventies began to challenge what they saw as the conservative gradualism of the “homophile” movement. Inspired by the burgeoning radicalism of the Black Power movement, the New Left protests of the Vietnam War, and the counterculture movement for sexual freedom, gay and lesbian activists agitated for a broader set of sexual rights that emphasized an assertive notion of “liberation” rooted not in mainstream assimilation, but in pride of sexual difference.

Perhaps no single incident did more to galvanize gay and lesbian activism than the 1969 uprising at the Stonewall Inn in New York City’s Greenwich Village. Police regularly raided gay bars and hangouts. But when police raided the Stonewall in June 1969, the bar patrons protested and sparked a multi-day street battle that catalyzed a national movement for gay liberation. Seemingly overnight, calls for homophile respectability were replaced with chants of “Gay Power!” 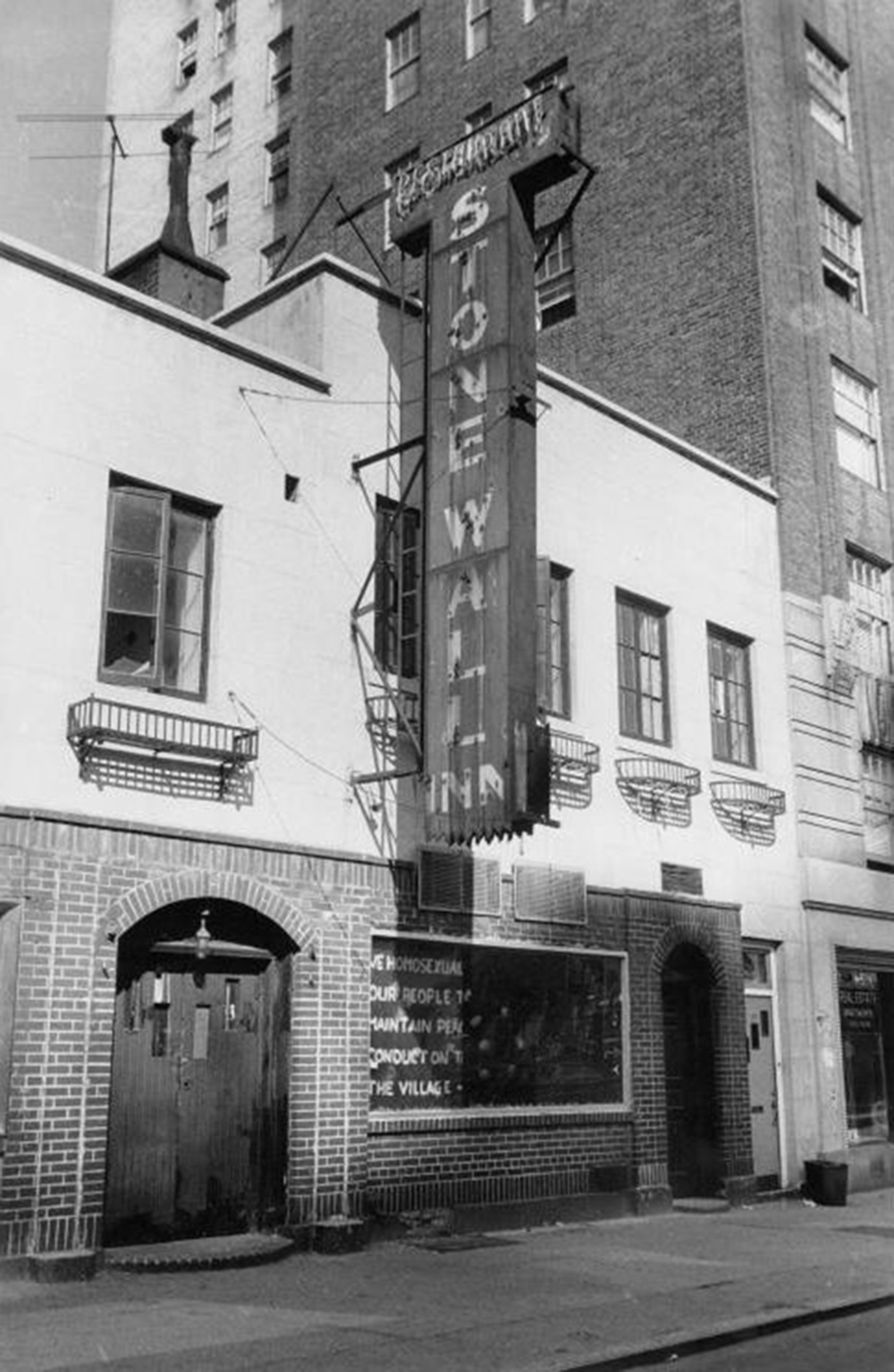 The window under the Stonewall sign reads: “We homosexuals plead with our people to please help maintain peaceful and quiet conduct on the streets of the Village–Mattachine.” Stonewall Inn 1969, Wikimedia.

In the seventies, gay activists attacked the popular culture that demanded them to keep their sexuality hidden. Activists urged gay Americans to “come out.” Gay rights organizations cited statistics proving that secrecy contributed to stigma and “coming out” could reduce suicide rates. All movements, however, proceed haltingly. Transgender people were often banned from participating in Gay Pride rallies and lesbian feminist conferences and they, in turn, mobilized to fight the high incidence of rape, abuse, and murder of transgender people. Activists now declared “all power to Trans Liberation.”

Throughout the following years, gay Americans gained unparalleled access to private and public spaces. A step towards the “normalization” of homosexuality occurred in 1973, when the American Psychiatric Association stopped classifying homosexuality as a mental illness. Pressure mounted on politicians. In 1982, Wisconsin became the first state to ban discrimination based on sexual orientation and more than eighty cities and nine states followed over the following decade. But progress proceeded unevenly and gay Americans continued to suffer hardships from a hostile culture.

As events in the 1970s broadened sexual freedoms and promoted greater gender equality, so too did they generate sustained and organized opposition. Evangelical Christians and other moral conservatives, for instance, mobilized to reverse gay victories. In 1977, Dade County, Florida used the slogan “Save Our Children” to overturn an ordinance banning discrimination based on sexual orientation. A leader of the brewing religious right, Jerry Falwell, said in 1980 that “It is now time to take a stand on certain moral issues …. We must stand against the Equal Rights Amendment, the feminist revolution, and the homosexual revolution. We must have a revival in this country.”

The most stunning conservative counterattack of the seventies was the defeat of the Equal Rights Amendment (ERA). Versions of the Amendment, which declared, “Equality of rights under the law shall not be denied or abridged by the United States or any state on account of sex,” were introduced to Congress each year since 1923. It finally passed amid the revolutions of the sixties and seventies and went to the states for ratification in March 1972. With high approval ratings, the ERA seemed destined to swiftly pass through state legislatures and become the Twenty-Seventh Amendment. Hawaii ratified the Amendment the same day it was passed by Congress. Within a year, thirty states had done likewise. But then the Amendment stalled. It took years for passage in more states. In 1977, Indiana became the thirty-fifth and last state to ratify.

By 1977, anti-ERA forces had gathered and deployed their strength against the Amendment. At a time when many women shared Betty Friedan’s frustration that society seemed to confine women to the role of homemaker, Phyllis Schlafly’s STOP ERA organization (“Stop Taking Our Privileges”) trumpeted the value and advantages of homemakers and mothers. Schlafly worked tirelessly to stifle the ERA. She lobbied legislators and organized counter-rallies to ensure that Americans heard “from the millions of happily married women who believe in the laws which protect the family and require the husband to support his wife and children.” The Amendment had needed only three more states for ratification. It never got them. In 1982 the ratification crusade expired.

The failed battle for the ERA uncovered the limits of the feminist crusade. And it illustrated the women’s movement’s inherent incapacity to represent fully the views of fifty percent of the country’s population, a population riven by class differences, racial disparities, and cultural and religious divisions.