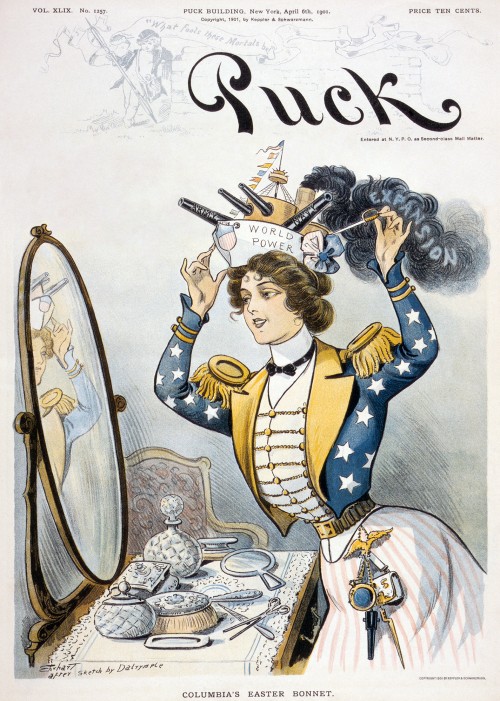 With great self-assurance of how she looks in her new hat, Columbia puts on her “Easter Bonnet” shaped as a warship labelled “World Power.” By 1901, when this political cartoon was published, Americans were feeling rather confident in their position as a world leader. Ehrhart after sketch by Dalrymple, “Columbia’s Easter bonnet”, in Puck (April 6, 1901). Wikimedia.

Debates over American imperialism revolved around more than just politics and economics and national self-interest. They also included notions of humanitarianism, morality, religion, and ideas of “civilization.” And they included significant participation by American women.

In the fall of 1903, Margaret McLeod, age twenty-one, originally of Boston, found herself in Australia on family business and in need of income. Fortuitously, she made the acquaintance of Alexander MacWillie, the top salesman for the H. J. Heinz Company, who happened to be looking for a young lady to serve as a “demonstrator” of Heinz products to potential consumers. McLeod proved to be such an attractive purveyor of India relish and baked beans that she accompanied MacWillie on the rest of his tour of Australia and continued on to South Africa, India, and Japan. Wherever she went, this “dainty young girl with golden hair in white cap and tucker” drew attention to Heinz’s products, but, in a much larger sense, she was also projecting an image of middle-class American domesticity, of pure womanhood. Heinz saw itself not only as purveying economical and healthful foodstuffs—it was bringing the blessings of civilization to the world.

When commentators, such as Theodore Roosevelt in his speech on “the strenuous life,” spoke about America’s overseas ventures, they generally gave the impression that this was a strictly masculine enterprise—the work of soldiers, sailors, government officials, explorers, businessmen, and scientists. But in fact, U.S. imperialism, focused as much on economic and cultural influence as military or political power, offered a range of opportunities for white, middle-class, Christian women. In addition to working as representatives of American business, women could serve as missionaries, teachers, and medical professionals, and as artists and writers they were inspired by, and helped to transmit, ideas about imperialism.

Moreover, the rhetoric of civilization that underlay imperialism was itself a highly gendered concept. According to the racial theory of the day, humans progressed through hierarchical stages of civilization in an orderly, linear fashion. Only Europeans and Americans had attained the highest level of civilization, which was superficially marked by whiteness but also included an industrial economy and a gender division in which men and women had diverging but complementary roles. Social and technological progress had freed women of the burdens of physical labor and elevated them to a position of moral and spiritual authority. White women thus potentially had important roles to play in U.S. imperialism, both as symbols of the benefits of American civilization and as vehicles for the transmission of American values.

It is also important to note that civilization, while often cloaked in the language of morality and Christianity, was very much an economic concept. The stages of civilization were primarily marked by their economic character (hunter-gatherer, agricultural, industrial), and the consumption of industrially produced commodities was seen as a key moment in “savages’” progress toward civilized life. Over the course of the nineteenth century, women in the West, for instance, had become closely associated with consumption, particularly of those commodities used in the domestic sphere. Thus it must have seemed natural for Alexander MacWillie to hire Margaret McLeod to “demonstrate” catsup and chili sauce at the same time as she “demonstrated” white, middle-class domesticity. By adopting the use of such progressive products in their homes, consumers could potentially absorb even the virtues of American civilization.

In some ways, women’s work in support of imperialism can be seen as an extension of the kind of activities many of them were already engaged in among working-class, immigrant, and Native American communities in the United States. Many white women felt that they had a duty to spread the benefits of Christian civilization to those less fortunate than themselves. American overseas ventures, then, merely expanded the scope of these activities—literally, in that the geographical range of possibilities encompassed practically the entire globe, and figuratively, in that imperialism significantly raised the stakes of women’s work. No longer only responsible for shaping the next generation of American citizens, white women now had a crucial role to play in the maintenance of civilization itself. They too would help determine whether civilization would continue to progress.

Of course, not all women were active supporters of U.S. imperialism. Many actively opposed it. Although the most prominent public voices against imperialism were male, women made up a large proportion of the membership of organizations like the Anti-Imperialist League. For white women like Jane Addams and Josephine Shaw Lowell, anti-imperialist activism was an outgrowth of their work in opposition to violence and in support of democracy. Black female activists, meanwhile, generally viewed imperialism as a form of racial antagonism and drew parallels between the treatments of African-Americans at home and, for example, Filipinos abroad. Indeed, Ida B. Wells viewed her anti-lynching campaign as a kind of anti-imperialist activism.