The channel, or medium, used to communicate a message affects how accurately the message will be received. Verbal, written, and nonverbal communications have different strengths and weaknesses. In business, the decision to communicate verbally or in written form can be a powerful one. In addition, a smart manager is aware of the nonverbal messages conveyed by either type of communication—as noted earlier, only 7% of verbal communication comes from the words themselves. 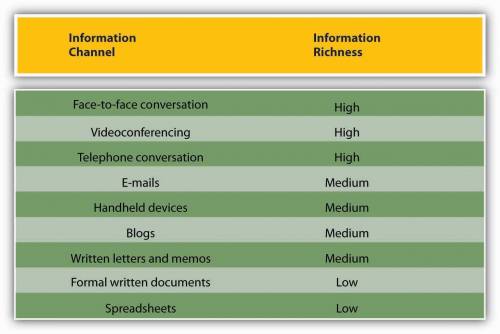 Like face-to-face and telephone conversation, videoconferencing has high information richness because Receivers and Senders can see or hear beyond just the words—they can see the Sender’s body language or hear the tone of their voice. Handheld devices, blogs, and written letters and memos offer medium-rich channels because they convey words and pictures/photos. Formal written documents, such as legal documents, and spreadsheets, such as the division’s budget, convey the least richness because the format is often rigid and standardized. As a result, nuance is lost.

In business, the decision to communicate verbally or in written form can be powerful. In addition, a smart manager is aware of the nonverbal messages conveyed by either type of communication—as noted earlier, only 7% of a verbal communication comes from the words themselves.

Picture a manager making a speech to a team of 20 employees. The manager is speaking at a normal pace. The employees appear interested. But how much information is being transmitted? Not as much as the speaker believes! Humans listen much faster than they speak. The average public speaker communicates at a speed of about 125 words a minute. And that pace sounds fine to the audience. (In fact, anything faster than that probably would sound weird. To put that figure in perspective, someone having an excited conversation speaks at about 150 words a minute.) On the basis of these numbers, we could assume that the employees have more than enough time to take in each word the manager delivers. And that’s the problem. The average person in the audience can hear 400–500 words a minute. The audience has more than enough time to hear. As a result, they will each be processing many thoughts of their own, on totally different subjects, while the manager is speaking. As this example demonstrates, oral communication is an inherently flawed medium for conveying specific facts. Listeners’ minds wander! It’s nothing personal—in fact, it’s totally physical. In business, once we understand this fact, we can make more intelligent communication choices based on the kind of information we want to convey.

The key to effective communication is to match the communication channel with the goal of the communication. For example, written media may be a better choice when the Sender wants a record of the content, has less urgency for a response, is physically separated from the Receiver, doesn’t require a lot of feedback from the Receiver, or the Message is complicated and may take some time to understand. Oral communication, however, makes more sense when the Sender is conveying a sensitive or emotional Message, needs feedback immediately, and does not need a permanent record of the conversation. Use the guide provided for deciding when to use written versus verbal communication.

Figure 12.17 Guide for When to Use Written Versus Verbal Communication

Business Use of E-Mail

The growth of e-mail has been spectacular, but it has also created challenges in managing information and an ever-increasing speed of doing business. Over 100 million adults in the United States use e-mail regularly (at least once a day). Internet users around the world send an estimated 60 billion e-mails every day, and many of those are spam or scam attempts. That makes e-mail the second most popular medium of communication worldwide, second only to voice. A 2005 study estimated that less than 1% of all written human communications even reached paper—and we can imagine that this percentage has gone down even further since then To combat the overuse of e-mail, companies such as Intel have even instituted “no e-mail Fridays” where all communication is done via other communication channels. Learning to be more effective in your e-mail communications is an important skill. To learn more, check out the business e-mail do’s and don’ts.

An important, although often ignored, rule when communicating emotional information is that e-mail’s lack of richness can be your loss. As we saw in the chart above, e-mail is a medium-rich channel. It can convey facts quickly. But when it comes to emotion, e-mail’s flaws make it far less desirable a choice than oral communication—the 55% of nonverbal cues that make a conversation comprehensible to a listener are missing. E-mail readers don’t pick up on sarcasm and other tonal aspects of writing as much as the writer believes they will, researchers note in a recent study.

The Sender may believe she has included these emotional signifiers in her Message. But, with words alone, those signifiers are not there. This gap between the form and content of e-mail inspired the rise of emoticons—symbols that offer clues to the emotional side of the words in each Message. Generally speaking, however, emoticons are not considered professional in business communication.

You might feel uncomfortable conveying an emotionally laden message verbally, especially when the message contains unwanted news. Sending an e-mail to your staff that there will be no bonuses this year may seem easier than breaking the bad news face-to-face, but that doesn’t mean that e-mail is an effective or appropriate way to deliver this kind of news. When the Message is emotional, the Sender should use verbal communication. Indeed, a good rule of thumb is that the more emotionally laden messages require more thought in the choice of channel and how they are communicated.

Direction of Communication Within Organizations

Information can move horizontally, from a Sender to a Receiver, as we’ve seen. It can also move vertically, down from top management or up from the front line. Information can also move diagonally between and among levels of an organization, such as a Message from a customer service representative up to a manager in the manufacturing department, or a Message from the chief financial officer sent down to all department heads. 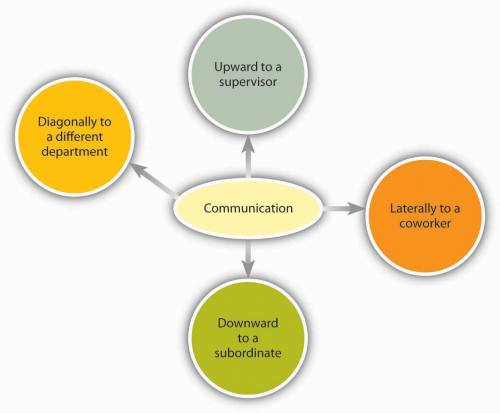 Communication flows in many different directions within an organization.

There is a chance for these arrows to go awry, of course. As Mihaly Csikszentmihalyi, author of best-selling books such as Flow, has noted, “In large organizations the dilution of information as it passes up and down the hierarchy, and horizontally across departments, can undermine the effort to focus on common goals.” Managers need to keep this in mind when they make organization design decisions as part of the organizing function.

The organizational status of the Sender can affect the Receiver’s attentiveness to the Message. For example, consider: A senior manager sends a memo to a production supervisor. The supervisor, who has a lower status within the organization, is likely to pay close attention to the Message. The same information, conveyed in the opposite direction, however, might not get the attention it deserves. The Message would be filtered by the senior manager’s perception of priorities and urgencies.

Figure 12.19 Who Managers Spend Time Communicating with at Work 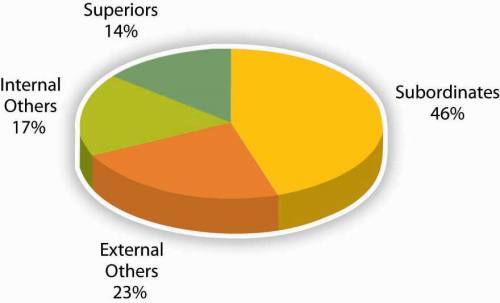 Public relations professionals create external communications about a client’s product, services or practices for specific Receivers. These Receivers, it is hoped, will share the Message with others. In time, as the Message is passed along, it should appear to be independent of The Sender, creating the illusion of an independently generated consumer trend, public opinion, and so on.

The Message of a public relations effort may be b2b (business to business), b2c (business to consumer), or media related. The Message can take different forms. Press releases try to convey a newsworthy message, real or manufactured. It may be constructed like a news item, inviting editors or reporters to reprint the Message in part, or as a whole, with or without acknowledgment of the Sender’s identity. Public relations campaigns create Messages over time, through contests, special events, trade shows, and media interviews in addition to press releases.

Advertising places external business Messages before target Receivers through media buys. A media buy is a fee that is paid to a television network, Web site, or magazine by an advertiser for an on-air, site, or publication ad. The fee is based on the perceived value of the audience who watches, reads, or frequents the space where the ad will appear.

In recent years, Receivers have begun to filter advertiser’s Messages, a phenomenon that is perceived to be the result of the large amount of ads the average person sees each day and a growing level of consumer wariness of paid Messaging. Advertisers, in turn, are trying to create alternative forms of advertising that Receivers won’t filter. The advertorial is one example of an external communication that combines the look of an article with the focused Message of an ad. Product placements in videos, movies, and games are other ways that advertisers strive to reach Receivers with commercial Messages.

A Web page’s external communication can combine elements of public relations, advertising, and editorial content, reaching Receivers on multiple levels and in multiple ways. Banner ads, blogs, and advertiser-driven “click-through” areas are just a few of the elements that allow a business to deliver a Message to a Receiver online. The perceived flexibility of online communications can impart a less formal (and, therefore, more believable) quality to an external communication. A Message relayed in a daily blog post will reach a Receiver differently than if it is delivered in an annual report, for example. The popularity and power of blogs is growing, with 11% of Fortune 500 companies having official blogs (up from 4% in 2005). In fact, blogs have become so important to some companies as Coca-Cola, Kodak, and Marriott that they have created official positions within their organizations titled “Chief Blogging Officer.”Chief blogging officer title catching on with corporations.

The “real-time” quality of Web communications may appeal to Receivers who might filter out a traditional ad and public relations message because of its “prefab” quality. Despite their “spontaneous” feel, many online pages can be revisited in perpetuity. For this reason, clear and accurate external communications are as vital for online use as they are in traditional media.

Customer communications can include letters, catalogs, direct mail, e-mails, text messages, and telemarketing messages. Some Receivers automatically filter bulk messages like these. Others will be receptive. The key to a successful external communication to customers is to convey a business message in a personally compelling way—dramatic news, a money-saving coupon, and so forth.