The so-called Age of Exploration was a period from the early 15th century and continuing into the early 17th century, during which European ships were traveled around the world to search for new trading routes and partners to feed burgeoning capitalism in Europe. In the process, Europeans encountered peoples and mapped lands previously unknown to them. Among the most famous explorers of the period were Christopher Columbus, Vasco da Gama, Pedro Álvares Cabral, John Cabot, Juan Ponce de León, and Ferdinand Magellan.

The Age of Exploration was rooted in new technologies and ideas growing out of the Renaissance, these included advances in cartography, navigation, and shipbuilding. The most important development was the invention of first the Carrack and then caravel in Iberia. These that were a combination of traditional European and Arab designs were the first ships that could leave the relatively passive Mediterranean and sail safely on the open Atlantic. 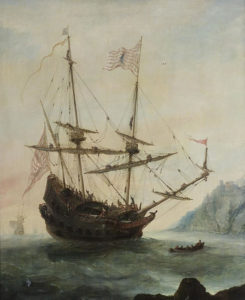 The first great wave of expeditions was launched by Portugal under Prince Henry the Navigator. Sailing out into the open Atlantic the Madeira Islands were discovered in 1419 and in 1427 the Azores were discovered and both became Portuguese colonies. The main project of Henry the Navigator was exploration of the West Coast of Africa. For centuries the only trade routes linking West Africa with the Mediterranean world were over the Sahara Desert. These routes were controlled by the Muslim states of North Africa, long rivals to Portugal. It was the Portuguese hope that the Islamic nations could be bypassed by trading directly with West Africa by sea. It was also hoped that south of the Sahara the states would be Christian and potential allies against the Muslims in the Maghreb. The Portuguese navigators made slow but steady progress, each year managing to push a few miles further south and in 1434 the obstacle of Cape Bojador was overcome. Within two decades the barrier of the Sahara had been overcome and trade in gold and slaves began in with what is today Senegal. Progress continued as trading forts were built at Elmina and Sao Tome and Principe became the first sugar producing colony. In 1482 an expedition under Diogo Cão made contact with the Kingdom of Kongo. The crucial breakthrough was in 1487 when Bartolomeu Dias rounded the Cape of Good Hope and proved that access to the Indian Ocean was possible. In 1498 Vasco da Gama made good on this promise by reaching India.

Portugal’s larger rival Spain had been somewhat slower that their smaller neighbour to begin exploring the Atlantic, and it was not until late in the fifteenth century that Castilian sailors began to compete with their Iberian neighbours. The first contest was for control of the Canary Islands, which Castille won. It was not until the union of Aragon and Castille and the completion of the reconquista that the large nation became fully committed to looking for new trade routes and colonies overseas. In 1492 the joint rulers of the nation decided to fund Christopher Columbus’ expedition that they hoped would bypass Portugal’s lock on Africa and the Indian Ocean reaching Asia by travelling west to reach the east. 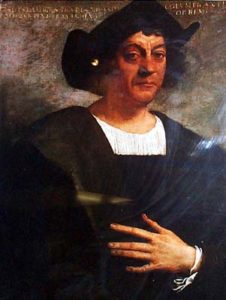 Columbus did not reach Asia, but rather found a New World, North America. The issue of defining areas of influence became critical. It resolved by Papal intervention in 1494 when the Treaty of Tordesillas divided the world between the two powers. The Portuguese “received” everything outside of Europe east of a line that ran 270 leagues west of the Cape Verde islands; this gave them control over Africa, Asia and western South America (Brazil). The Spanish received everything west of this line, territory that was still almost completely unknown.

Columbus and other Spanish explorers were initially disappointed with their discoveries. Unlike Africa or Asia the Caribbean islanders had little to trade with the Spanish ships. The islands thus became the focus of colonization efforts. It was not until the continent itself was explored that Spain found the wealth it had sought in the form of abundant gold. In the Americas the Spanish found a number of empires that were as large and populous as those in Europe. However, the Spanish conquistadors, with the aid of the pandemics of disease their arrival unleashed, managed to conquer them with only a handful of men. Once Spanish suzereignancy was established the main focus became the extraction and export of gold and silver.

The nations outside of Iberia refused to acknowledge the Treaty of Tordesillas. France, the Netherlands, and Britain each had a long maritime tradition and, despite Iberian protections, the new technologies and maps soon made their way north.

The first of these missions was that of the British funded John Cabot. It was the first of a series of French and British missions exploring North America. Spain had largely ignored the northern part of the Americas as it had few people and far fewer riches than Central America. The expeditions of Cabot, Cartier and others were mainly hoping to find the Northwest passage and thus a link to the riches of Asia. This was never discovered but in their travels other possibilities were found and in the early seventeenth century colonist from a number of Northern European states began to settle on the east coast of North America. 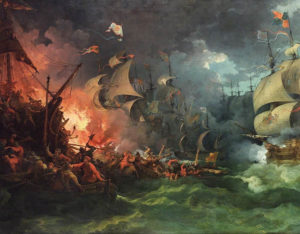 Defeat of the Spanish Armada, 8 August 1588 by Philippe-Jacques de Loutherbourg, painted 1796 depicts the battle of Gravelines

It was the northerners who also became the great rivals to the Portuguese in Africa and around the Indian Ocean. Dutch, French, and British ships began to flaunt the Portuguese monopoly and found trading forts and colonies of their own. Gradually the Portuguese were forced out of many of their most valuable possessions. The northerners also took the lead in exploring the last unknown regions of the Pacific Ocean. Dutch explorers such as Willem Jansz and Abel Tasman explored the coasts of Australia while in the eighteenth century it was British explorer James Cook that mapped much of Polynesia.

The effect of the Age of Exploration was unprecedented. For millennia it had been the Mediterranean economy that had been the continent’s most vibrant and regions like Italy and Greece had thus been the wealthiest and most potent. The newly dominant Atlantic economy was controlled by the states of Western Europe, such as France, Britain, and Germany, and to the present they have been the wealthiest and most powerful on the continent.

Following the period of exploration was the Commercial Revolution when trans-oceanic trade became commonplace. The importance of trade made it so that traders and merchants, not the feudal landowners, were the most powerful class in society. In time in Britain, France and other nations thus bourgeoisie would come to control the politics and government of the nations.