Fall of the Bastille 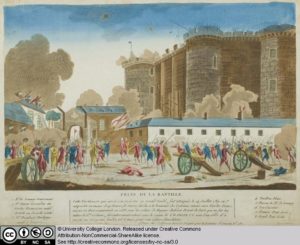 This print, with its key and short text outlining the history of the Bastille purports to educate its viewers about what took place on 14th July 1789 and to place the events within a historical framework. Yet we cannot read it as a dispassionate account of the Bastille’s capture. Rather this print belongs to a large body of imagery that sought to glorify and give epic status to an event that, in itself, was of limited significance. The importance of the fall of the Bastille was largely symbolic, for it was easily interpreted as a sign of the French people’s triumph over the forces of despotism.

The text accompanying the image heroises the achievements of the French civilians and guard by comparing their swift victory to the failure of Le Grand Condé (a celebrated seventeenth-century military leader) to capture the castle. The success of the French civilians is attributed to their collective bravery, portrayed in the action-packed image, in which the crowd of courageous French men, armed with guns, bayonets, scythes and pikes, mount their attack on the Bastille, whose enormous form looms over them. The prominence of the cannons, billowing clouds of gun smoke and the bodies of three men in the foreground convey the violence of the episode, which claimed many lives.

The printmaker has sought to draw our attention to a drama unfolding in the midst of this chaotic scene, focusing our attention on the arrest of the Marquis de Launay, the Governor of the Bastille, by Harné, a grenadier in the French Guard, and Humbert, a watchmaker. All three are identified in the key, numbered 1 to 3. Harné and Humbert were often singled out from amongst their fellow Vainqueurs de la Bastille (conquerors of the Bastille), for supposedly having been the first across its drawbridge and for having arrested de Launay (who was subsequently lynched by the crowd).

The technical simplicity and crude rendering of this print (note the clumsy colouring and lack of facial delineation) suggests that it was intended for speedy production and wide dissemination at minimum cost. Yet its creator was clearly knowledgeable about the compositional conventions of high art: note, for example, the figure leaning nonchalantly on a cannon to the left of the composition. The inclusion of a figure, or a tree, placed at the edge of a scene was a widely used way of containing the viewer’s attention within the picture space: such devices are called repoussoirs. Without doubt this print, produced sometime after the event, would have found a ready audience. As Rolf Reichardt has noted, such images ‘satisfied the need, particularly of the simple people […] to relive, in pictorial and oral as well as written form, the act that had liberated them from an existence of fear and had given them a sense of being a patriotically unified force.’ [1]