The origins of the muscles of facial expression are on the surface of the skull (remember, the origin of a muscle does not move). The insertions of these muscles have fibers intertwined with connective tissue and the dermis of the skin. Because the muscles insert in the skin rather than on bone, when they contract, the skin moves to create facial expression (Figure 16.7). 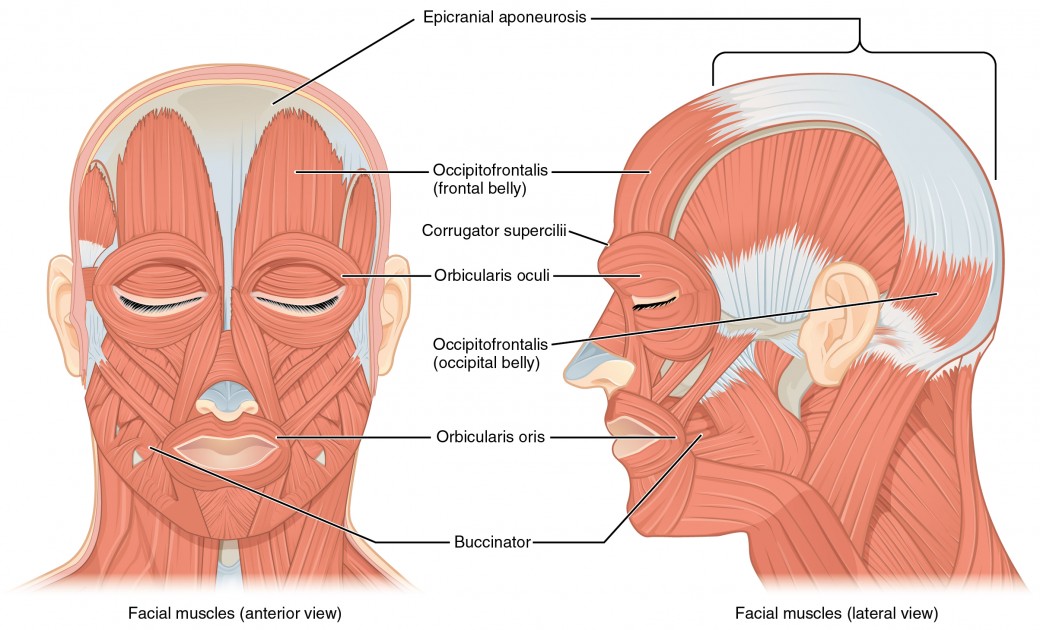 The majority of the face is composed of the buccinator muscle, which compresses the cheek. This muscle allows you to whistle, blow, and suck; and it contributes to the action of chewing. There are several small facial muscles, one of which is the corrugator supercilii, which is the prime mover of the eyebrows. Place your finger on your eyebrows at the point of the bridge of the nose. Raise your eyebrows as if you were surprised and lower your eyebrows as if you were frowning. With these movements, you can feel the action of the corrugator supercilli. Additional muscles of facial expression are presented in Figure 16.8. 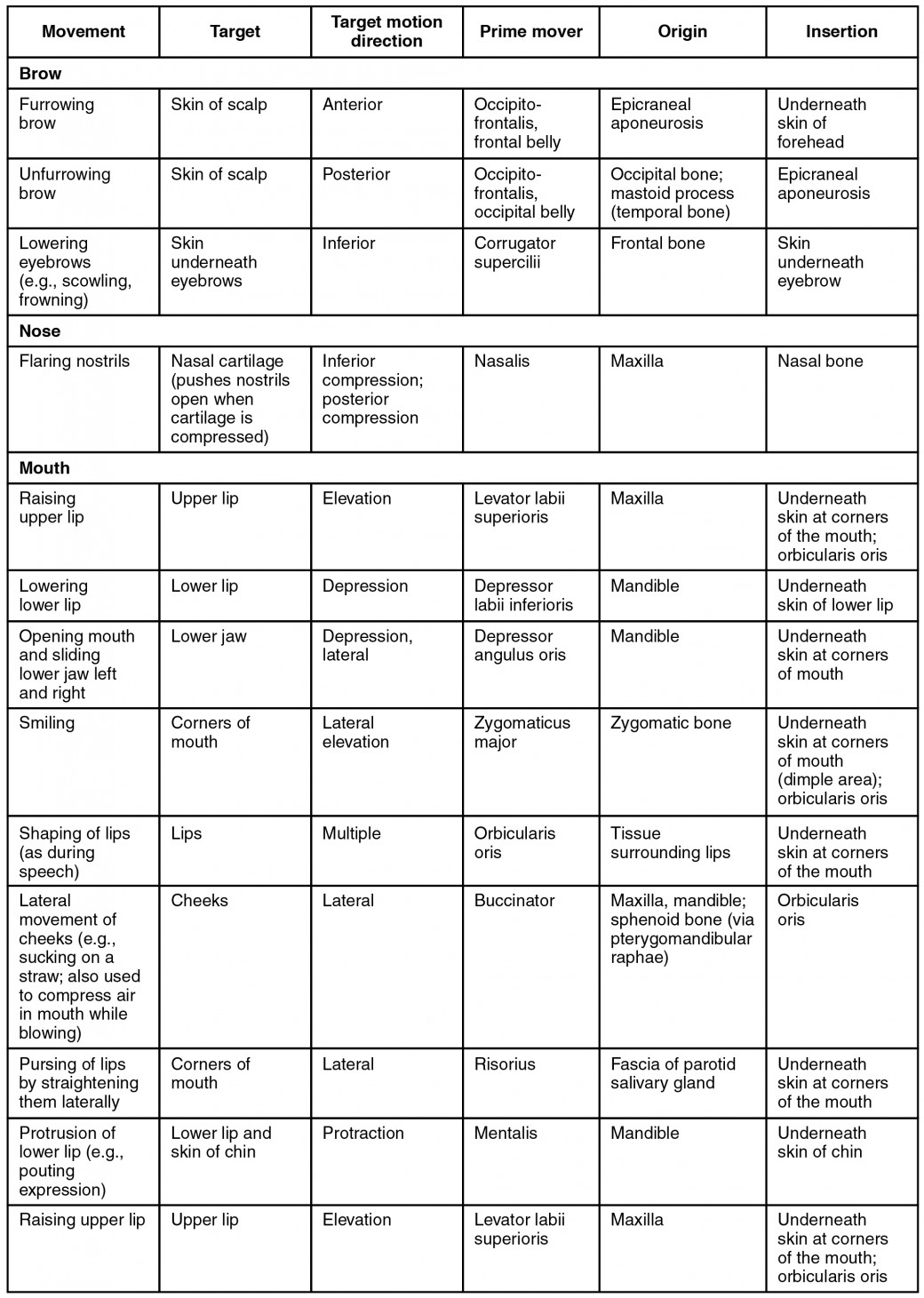 The movement of the eyeball is under the control of the extrinsic eye muscles, which originate outside the eye and insert onto the outer surface of the white of the eye. These muscles are located inside the eye socket and cannot be seen on any part of the visible eyeball (Figure 16.9 and Table 16.3). If you have ever been to a doctor who held up a finger and asked you to follow it up, down, and to both sides, he or she is checking to make sure your eye muscles are acting in a coordinated pattern.

Figure 16.9. Muscles of the Eyes
(a) The extrinsic eye muscles originate outside of the eye on the skull. (b) Each muscle inserts onto the eyeball. 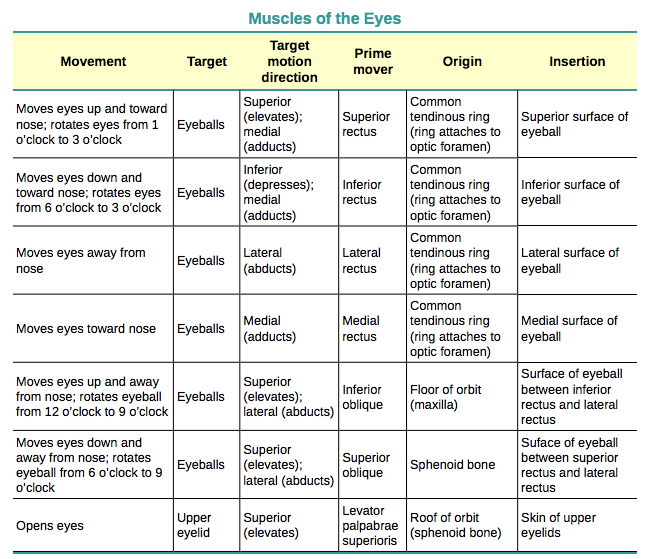 In anatomical terminology, chewing is called mastication. Muscles involved in chewing must be able to exert enough pressure to bite through and then chew food before it is swallowed (Figure 16.10 and Table 16.4). The masseter muscle is the main muscle used for chewing because it elevates the mandible (lower jaw) to close the mouth, and it is assisted by the temporalis muscle, which retracts the mandible. You can feel the temporalis move by putting your fingers to your temple as you chew.

Although the tongue is obviously important for tasting food, it is also necessary for mastication, deglutition (swallowing), and speech (Figure 16.11 and Figure 16.12). Because it is so moveable, the tongue facilitates complex speech patterns and sounds. 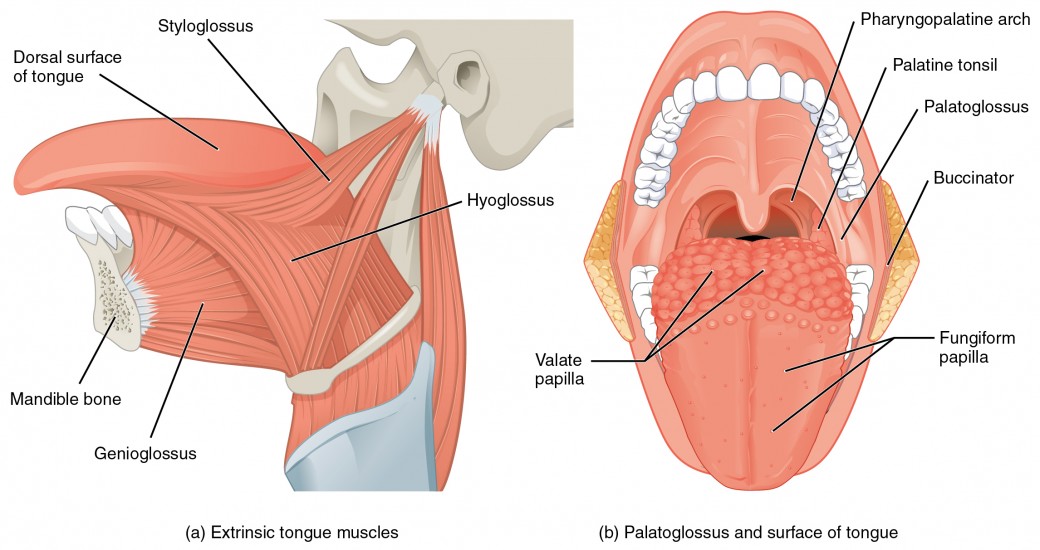 Figure 16.11. Muscles that Move the Tongue 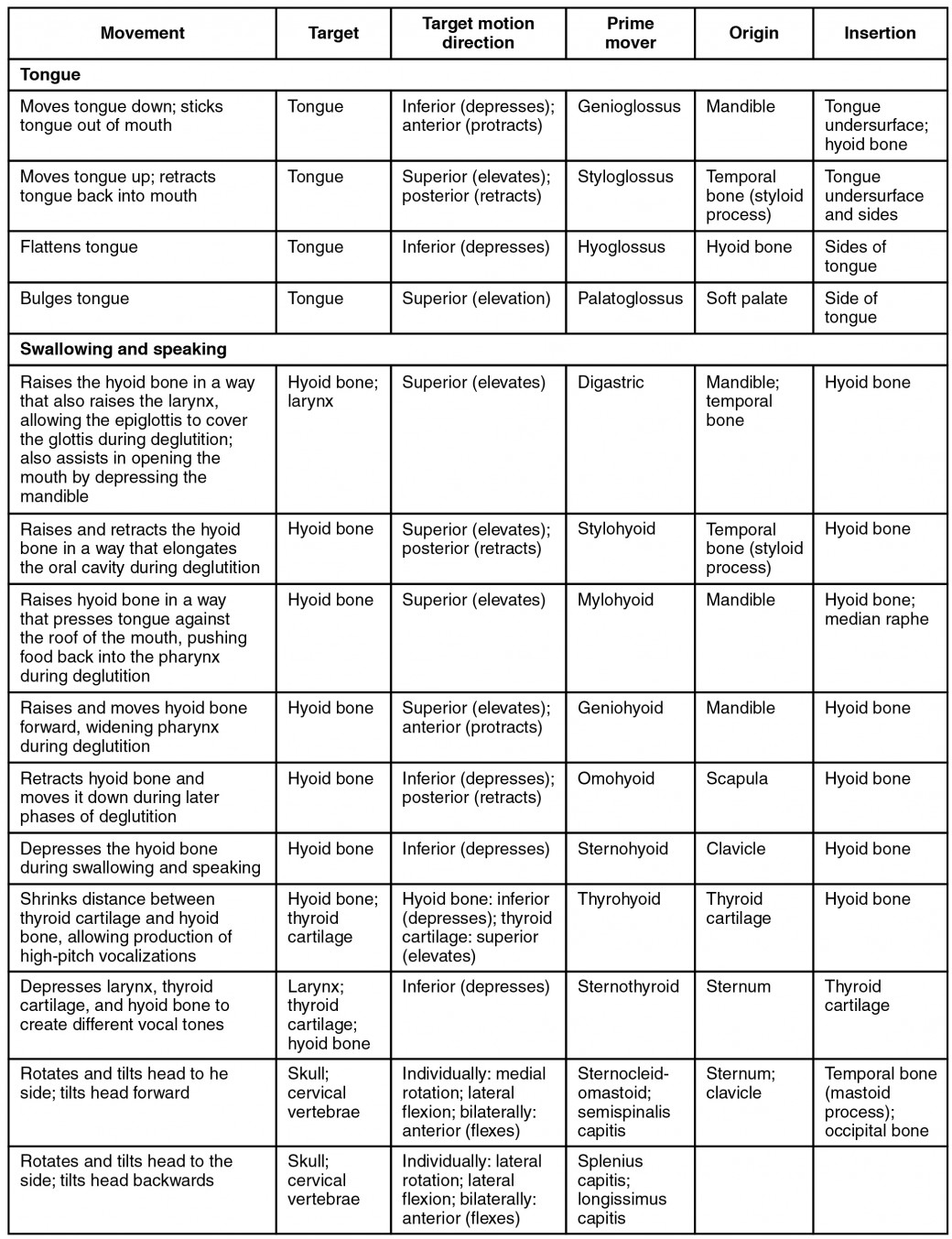 The muscles of the anterior neck assist in deglutition (swallowing) and speech by controlling the positions of the larynx (voice box), and the hyoid bone, a horseshoe-shaped bone that functions as a solid foundation on which the tongue can move. The muscles of the neck are categorized according to their position relative to the hyoid bone (Figure 16.13). Suprahyoid muscles are superior to it, and the infrahyoid muscles are located inferiorly. 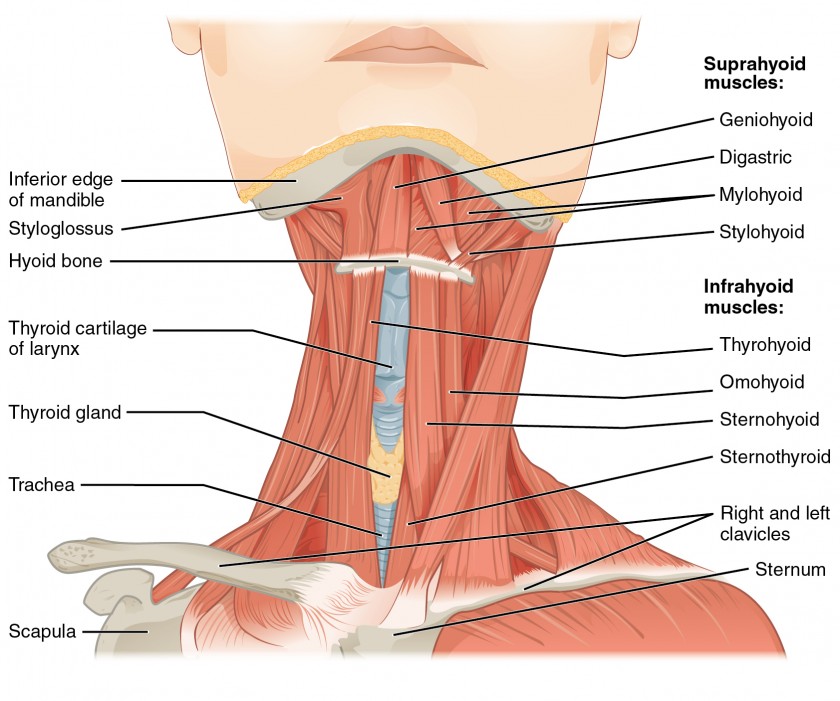 The head, attached to the top of the vertebral column, is balanced, moved, and rotated by the neck muscles (Table 16.5). When these muscles act unilaterally, the head rotates. When they contract bilaterally, the head flexes or extends. The major muscle that laterally flexes and rotates the head is the sternocleidomastoid. In addition, both muscles working together are the flexors of the head. Place your fingers on both sides of the neck and turn your head to the left and to the right. You will feel the movement originate there. This muscle divides the neck into anterior and posterior triangles when viewed from the side (Figure 16.14).

Figure 16.14. Posterior and Lateral Views of the Neck
The superficial and deep muscles of the neck are responsible for moving the head, cervical vertebrae, and scapulas. 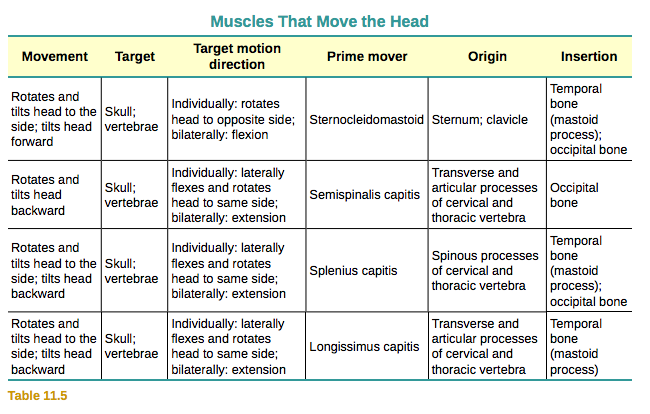 The splenius muscles originate at the midline and run laterally and superiorly to their insertions. From the sides and the back of the neck, the splenius capitis inserts onto the head region, and the splenius cervicis extends onto the cervical region. These muscles can extend the head, laterally flex it, and rotate it (Figure 16.15). 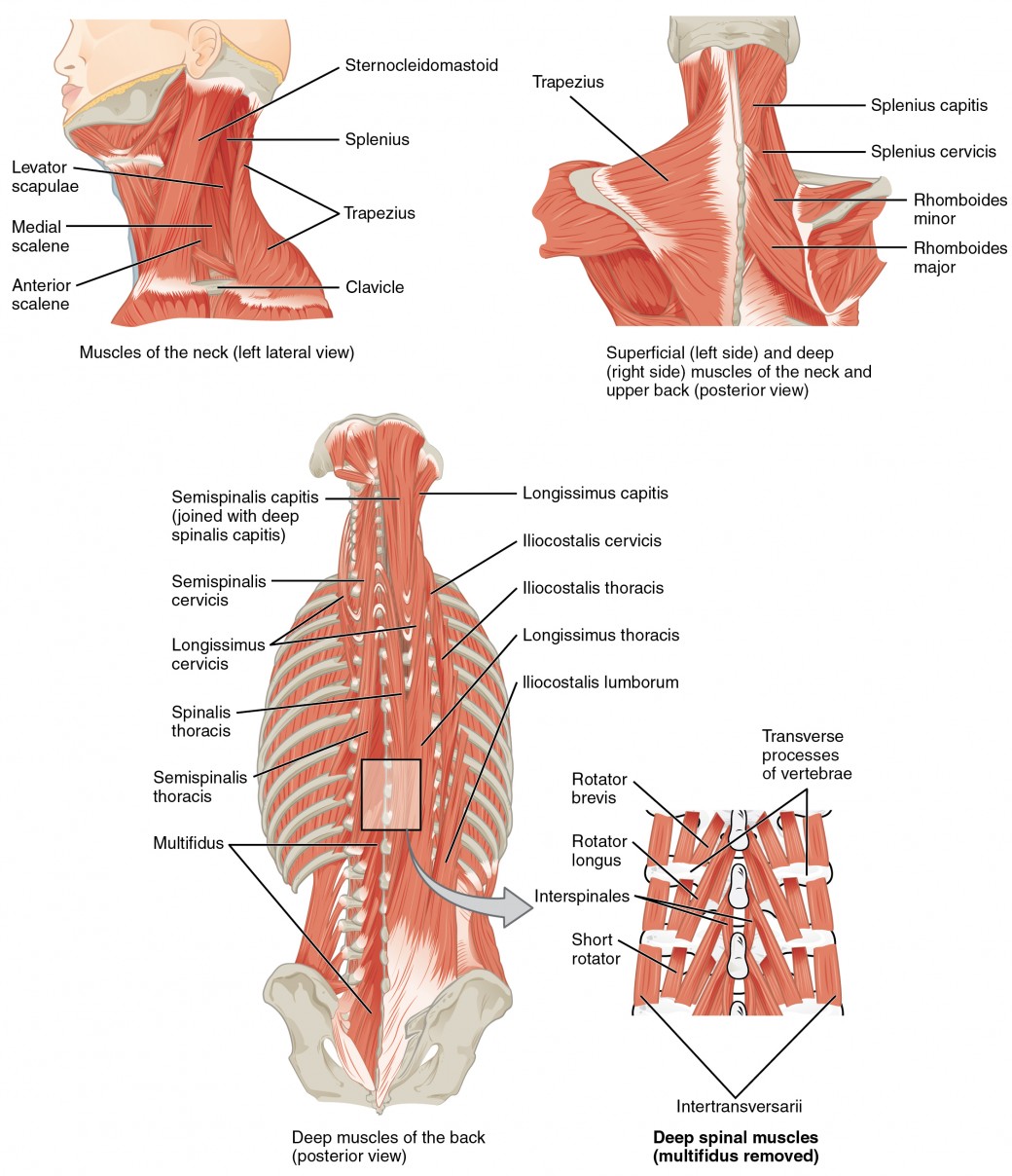