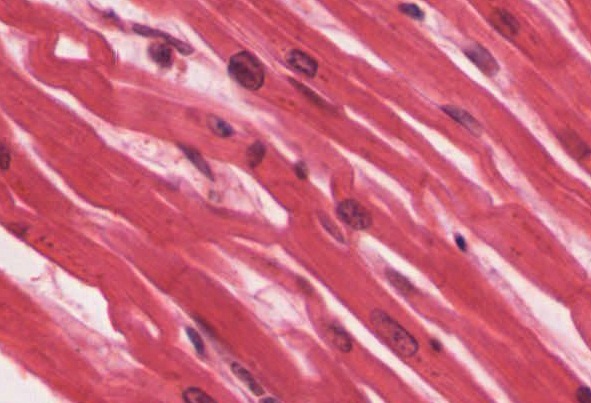 Figure 15.21. Cardiac Muscle Tissue
Cardiac muscle tissue is only found in the heart. LM × 1600. (Micrograph provided by the Regents of University of Michigan Medical School © 2012)

View the University of Michigan WebScope athttp://virtualslides.med.umich.edu/Histology/Cardiovascular%20System/305_HISTO_40X.svs/view.apml to explore the tissue sample in greater detail.

Figure 15.22. Cardiac Muscle
Intercalated discs are part of the cardiac muscle sarcolemma and they contain gap junctions and desmosomes.

The wave of contraction that allows the heart to work as a unit, called a functional syncytium, begins with the pacemaker cells. This group of cells is self-excitable and able to depolarize to threshold and fire action potentials on their own, a feature called autorhythmicity; they do this at set intervals which determine heart rate. Because they are connected with gap junctions to surrounding muscle fibers and the specialized fibers of the heart’s conduction system, the pacemaker cells are able to transfer the depolarization to the other cardiac muscle fibers in a manner that allows the heart to contract in a coordinated manner.

Another feature of cardiac muscle is its relatively long action potentials in its fibers, having a sustained depolarization “plateau.” The plateau is produced by Ca++ entry though voltage-gated calcium channels in the sarcolemma of cardiac muscle fibers. This sustained depolarization (and Ca++ entry) provides for a longer contraction than is produced by an action potential in skeletal muscle. Unlike skeletal muscle, a large percentage of the Ca++ that initiates contraction in cardiac muscles comes from outside the cell rather than from the SR.