The vapor pressure of a solution is directly influenced by the number of solute molecules present in a given amount of solvent.

Vapor pressure is a measure of the tendency of a material to escape into the environment via gas. A substance that evaporates quickly has high vapor pressure and is referred to as a volatile substance. When a solute is added to a solvent , the vapor pressure decreases. 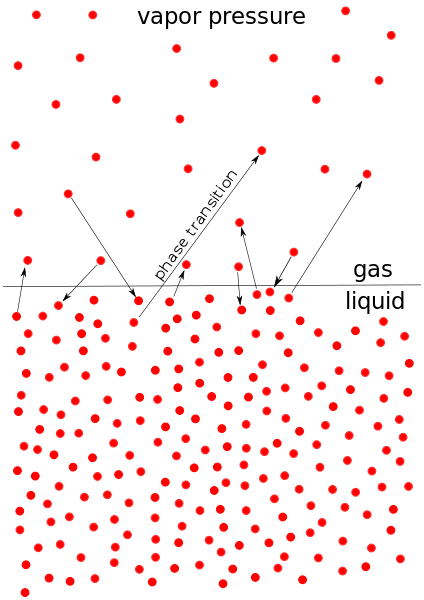 Vapor pressure: Vapor pressure measures the particle transition from the liquid phase to the gas phase and vice versa.

First, calculate the mole fraction of the solvent:

Freezing point depression is a colligative property observed in solutions, brought on by the introduction of solute molecules to a solvent.

Freezing point depression is the phenomena that describes why adding a solute to a solvent results in the lowering of the freezing point of the solvent. When a substance starts to freeze, the molecules slow down due to the decreases in temperature, and the intermolecular forces start to take over. The molecules will then arrange themselves in a pattern, and thus turn into a solid. For example, as water is cooled to the freezing point, its molecules become slower and hydrogen bonds begin to “stick” more, eventually creating a solid. If salt is added to the water, the Na+ and Cl– ions attract to the water molecules and interfere with the formation of the large network solid known as ice. In order to achieve a solid, the solution must be cooled to an even lower temperature. 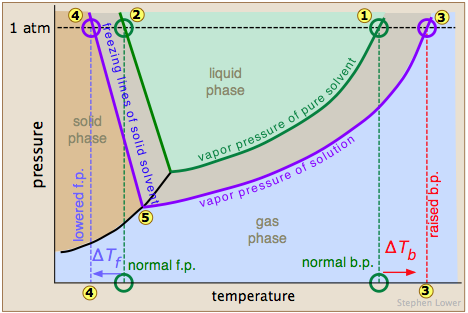 The freezing point depression can be calculated by the formula:

What is the freezing point of an aqueous solution when enough NaCl has been added to create a 0.25 m solution? The Kf value for water is 1.858 oC/m.

To solve this, you must remember that NaCl breaks into two ions, Na+ and Cl–, when it dissolves in water. In simplest terms, this means it has an “i” factor of 2.

The boiling point of a solvent is elevated in the presence of solutes.

There is one category of properties that can only be applied to solutions; these are known as colligative properties. Properties can be considered colligative only if they are dependent on the amount of solute present in the solution, disregarding the identity of the solute itself.

The boiling point of a solvent will increase when a solute is dissolved in it. This is referred to as boiling point elevation. The elevation of the boiling point is directly dependent on the amount of solute present in the solution, but it is not based on the identity of the solute, so it is considered a colligative property.

The Relationship Between Boiling Point Elevation and Vapor Pressure

Boiling point elevation can be explained in terms of vapor pressure . Vapor pressure is defined as the pressure exerted by a vapor in thermodynamic equilibrium with its condensed phases at a given temperature . In layman’s terms, it is simply a measure of the tendency of the solution molecules to escape by entering the gas phase. A liquid boils when its vapor pressure is equal to the air pressure.

Boiling point: The boiling point of a pure liquid. When the vapor pressure of the liquid matches the atmospheric pressure, the liquid will boil.

Calculate the boiling point of an aqueous solution where enough NaCl is added to make a 0.37 molal solution. The Kb for water is 0.512 [latex]\frac {^oC}{m}[/latex].

Osmotic pressure is the pressure needed to nullify the effects of osmosis and is directly influenced by the amount of solute in the system.

A solution is defined as a homogeneous mixture of both a solute and solvent. Solutions generally have different properties than the solvent and solute molecules that compose them. Some special properties of solutions are dependent solely on the amount of dissolved solute molecules, regardless of what that solute is; these properties are known as colligative properties .

Imagine osmosis taking place in an upright U-tube. The height of the solution will continue to increase due to a net flow of solvent until the added pressure of the height will cause the flow of solution to stop. The height difference between the two sides can be be converted into pressure to find the osmotic pressure exerted on the solution by the pure solvent.

U-Tube showing osmotic pressure: On the left side of the U-tube is an aqueous solution, and on the right side is pure water. The pure water is trying to dilute the solution by travelling through the semipermeable membrane. Eventually the added weight of the extra water on the left causes enough pressure to stop osmosis.

The osmotic pressure (II) of an ideal solution can be approximated by the Morse equation:

Here, i is the van ‘t Hoff factor, M is the molarity of the solution, R is the gas constant, and T is the absolute temperature in Kelvin . We can see from this equation that the amount of solute present in the solution will directly affect the osmotic pressure of the system .

First, fill in all of the necessary information, and then solve:

i = 2 (NaCl breaks into two particles)