Structures and Functions of the Outer and Middle Ear

Hearing is the transduction of sound waves into a neural signal that relies on the structures of the ear. The outwardly visible structure that is often referred to as the ear is more correctly referred to as the outer ear (external ear), or the auricle. The C-shaped curves of the auricle direct sound waves towards the ear canal, which enters into the skull through the external auditory meatus of the temporal bone. At the end of the ear canal is the tympanic membrane, or ear drum, which vibrates with the movement of air in sound waves. 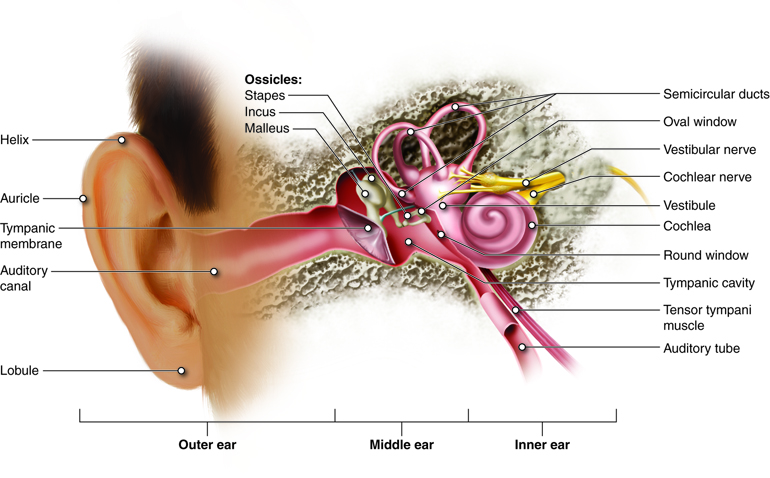 Anatomy of the Ear. The outer ear is the auricle and ear canal through to the tympanic membrane. The middle ear contains the ossicles and is connected to the pharynx by the auditory tube. The inner ear is the cochlea and vestibule which are responsible for hearing and equilibrium, respectively. This work by Cenveo is licensed under a Creative Commons Attribution 3.0 United States (http://creativecommons.org/licenses/by/3.0/us/).

Along the length of the ear canal are ceruminous glands that contribute to the production of cerumen (earwax). Because cerumen is sticky it can help prevent small particles from finding their way to the tympanic membrane. Cerumen also helps prevent bacterial growth, waterproofs the auditory canal and tympanic membrane, and may be a deterrent to small insects.

The middle ear consists of a space spanned by three small bones, the ossicles, which amplify the movements of the tympanic membrane. These small bones are the malleus, incus, and stapes, which are Latin names that roughly translate to hammer, anvil, and stirrup. The malleus is attached to the tympanic membrane and articulates with the incus, which articulates with the stapes. The stapes is then attached to the inner ear where the sound waves will be transduced to a neural signal.

The middle ear is also connected to the pharynx through the auditory tube (Eustachian tube) that helps equilibrate air pressure across the tympanic membrane. When flying, you may have experienced what happens when the pressures across the tympanic membrane are not equal. As the plane climbs, pressure on the outside of the membrane decreases. If there is not a corresponding decrease in pressure in the middle ear, the pressure difference will cause the eardrum to push outward, causing pain and muffled hearing. The auditory tube is normally closed, but will typically open when muscles of the pharynx contract during swallowing or yawning. For this reason, chewing gum or drinking as the plane climbs will often relieve these symptoms. The auditory tube also provides a pathway of drainage for fluids that accumulate during middle ear infections (otitis media). Unfortunately, it is also the auditory tubes that play a role in causing otitis media, as microorganisms can use this path to move from the pharynx into the middle ear. This is especially common in children.

Structure and Function of the Inner Ear

The inner ear is entirely enclosed within the temporal bone. It has two separate regions, the cochlea and vestibule, which are responsible for hearing and balance, respectively. The neural signals from the two regions of the inner ear are relayed to the brainstem through separate fiber bundles, but which run together as the vestibulocochlear nerve.

Sound information is transmitted from the middle ear to the inner ear via the stapes attachment to the oval window, which is a membrane at the beginning of the cochlea. As the tympanic membrane vibrates from sound waves, the ossicles amplify that vibration, and then the oval window moves with the same vibrations. The oval window is at the beginning of a tube that runs the length of the cochlea to its tip (helicotrema) and back alongside itself to end at another membrane called the round window (secondary tympanic membrane). 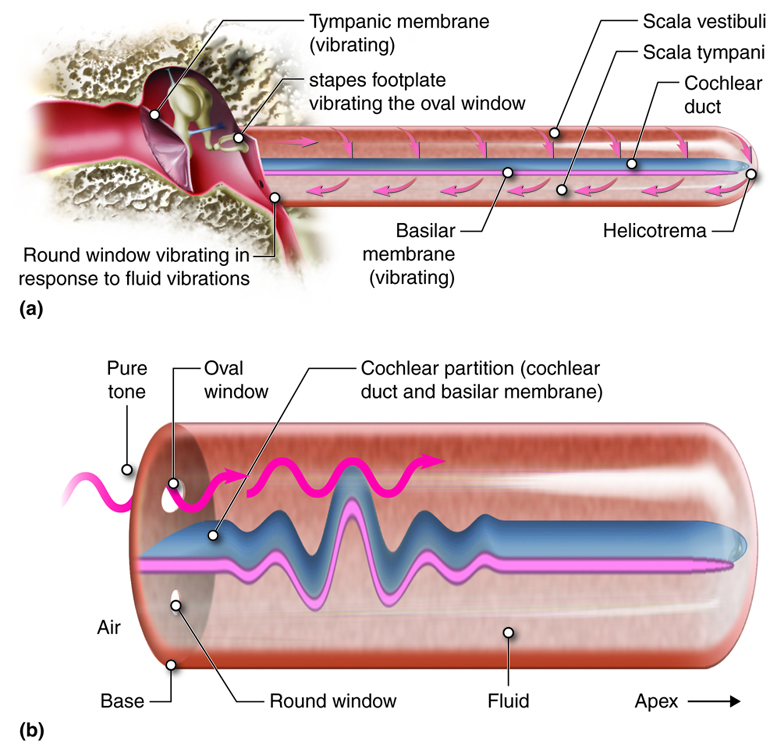 (a) Simplified Anatomy of the Cochlea. The cochlea can be modeled as a long tube running from the oval window, out to the helicotrema, and back. (b). Sound Wave Transmitted into the Cochlea. As sound is transmitted from air to the cochlea through the oval window, it creates a wave within the fluid of the cochlea (often called a standing wave). This wave creates displacement in the membranes of the cochlear duct, where sound is sensed. This work by Cenveo is licensed under a Creative Commons Attribution 3.0 United States (http://creativecommons.org/licenses/by/3.0/us/).

As the oval window is pushed in by sound waves, fluid within this tube is pushed along its length and the round window at its other end can bulge out as a result of that movement. Likewise, when the oval window is pulled back, the fluid inside this tube is drawn back and the round window can pucker in to compensate. As vibrations of the tympanic membrane are transmitted through the ossicles, a wave (often referred to as standing wave because of its properties) is created within the fluid in the cochlea that displaces sections of the cochlear partition (cochlear duct and basilar membrane). It is these waves that are detected by the sensing cells found attached to the basilar membrane. 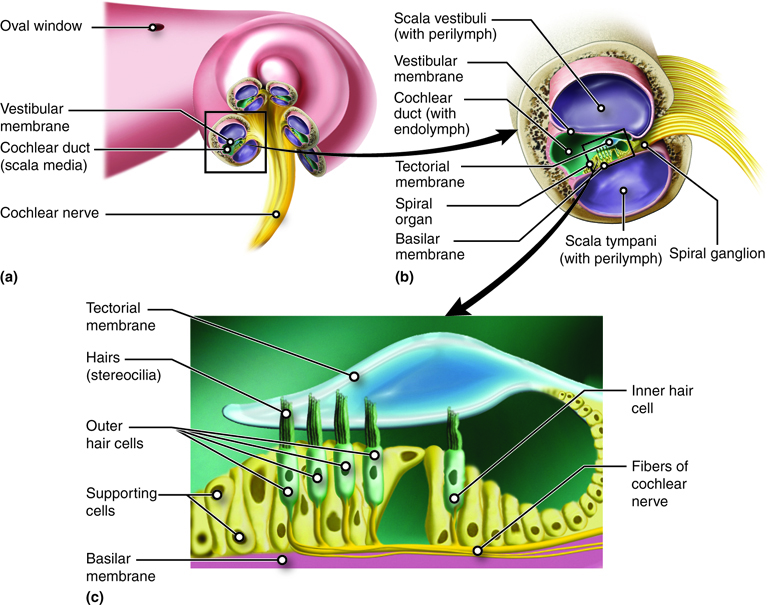 Anatomy of the Cochlea. The cochlea is a spiral structure (a) divided into three chambers (b). The middle chamber, the cochlear duct, contains the spiral organ that has hair cells (c) for sensing the vibrations we perceive as sound. This work by Cenveo is licensed under a Creative Commons Attribution 3.0 United States (http://creativecommons.org/licenses/by/3.0/us/).

The two spaces are on either side of the cochlear duct, which is the space that contains the structures that transduce sound into the neural signal. Those structures are contained within the spiral organ or organ of Corti, which lies on top of the basilar membrane that separates it from the scala tympani. The spiral organ contains hair cells with stereocilia on their apical membrane. The stereocilia bend in response to movement of the basilar membrane relative to the partially fixed tectorial membrane. Depending on which direction the stereocilia bend, they open or close ion channels, leading to signal changes in the cochlear nerve.

As a standing wave is set up within the scala vestibuli and scala tympani in response to movement at the oval window, the basilar membrane responds by moving at a specific spot, dependent on the frequency of the standing wave. 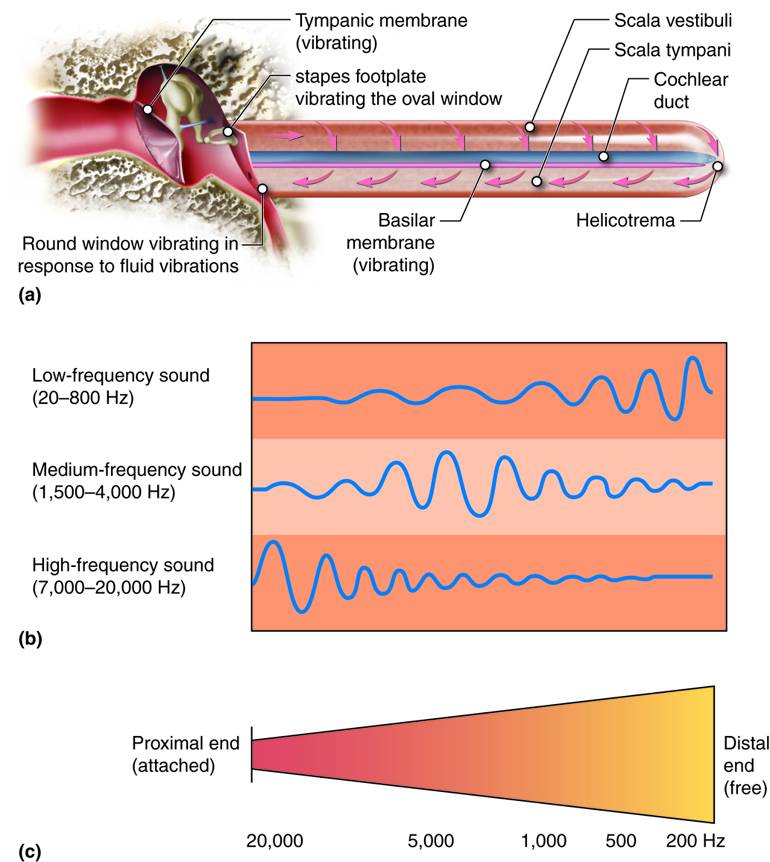 The information sensed by the spiral organ of the cochlea is transmitted into the brain via the vestibulocochlear nerve (cranial nerve VIII) to nuclei in the pons. At the level of the pons and related connections in the midbrain, some processing of auditory information occurs, including identifying where a sound is coming from and responding to loud noises. From the pons and midbrain, fibers carrying auditory information project to the thalamus and then, from there to the primary auditory cortex of the temporal lobe. It is here that the conscious perception of sound is located.

Along with hearing, the inner ear is responsible for encoding information about equilibrium (the sense of balance), which it does in the vestibular apparatus.

Structures of the Vestibular Apparatus. This work by Cenveo is licensed under a Creative Commons Attribution 3.0 United States (http://creativecommons.org/licenses/by/3.0/us/).

The saccule and utricle each contain a sense organ, called the macula, where stereocilia and their supporting cells are found. These maculae (plural) are oriented 90 degrees to one another so that they respond to positions in different planes. 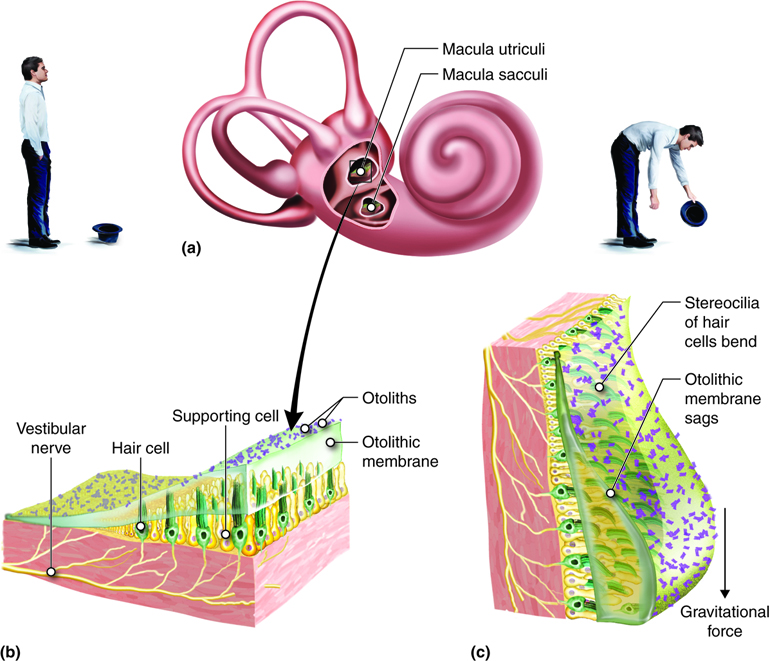 Structure of the Maculae. The macula utriculi (macula of the utricle) lies horizontally while the macula sacculi lies vertically (a). If the head is tilted, the dense otolithic membrane will cause the stereocilia of the hair cells to move from the straight position (b) to the bent position (c), sending signals to the central nervous system that the head has been tilted forward. This work by Cenveo is licensed under a Creative Commons Attribution 3.0 United States (http://creativecommons.org/licenses/by/3.0/us/).

The organs can respond to changes in position and acceleration because the tips of their stereocilia project into a dense otolithic membrane made up of a mixture containing granules of calcium and protein, called otoliths, which gives rise to their common name, the otolithic organs. When the maculae (otolithic organs) move, gravity causes the dense otolithic membrane to move relative to the less dense cell layer beneath the stereocilia. This causes the stereocilia to bend, initiating action potentials in the vestibular nerve fibers that innervate them.

Bundles of stereocilia are arranged in various directions, so that any direction of inclination will depolarize a subset of the hair cells and hyperpolarize a corresponding subset of sensory neurons. How the body senses head position and the linear (horizontal or vertical) direction of acceleration is determined by the specific pattern of hair-cell activity across the maculae.

The semicircular canals are three ring-like extensions from the vestibule (the region containing the saccule and utricle). One is oriented in the horizontal plane and two are in the vertical plane. The vertical canals are 45o off of the sagittal plane, one is anterior and one is posterior. 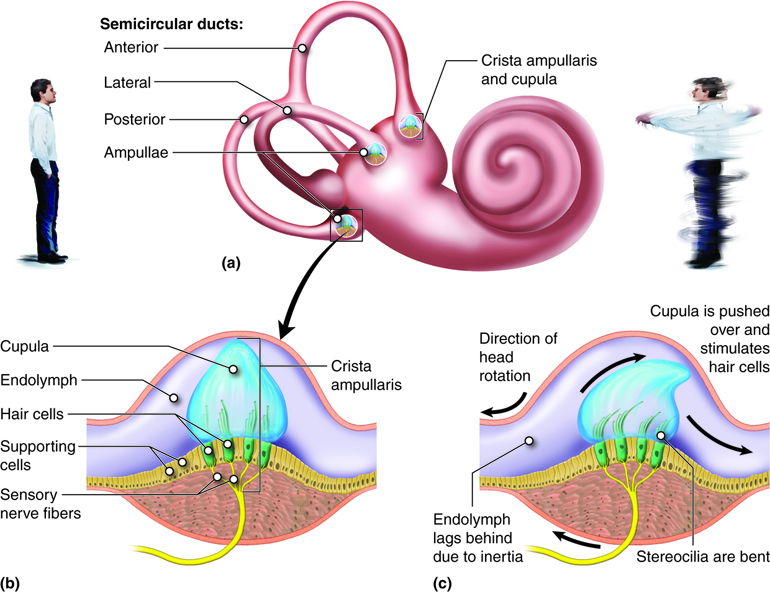 Structure and Function of the Semicircular Canals. The three canals each have an ampulla containing a crista ampullaris and cupula (a). When the head is stationary, the cupula, and embedded stereocilia, are not bent (b). When the head rotates in the same plane as one of the canals, the fluid in the canal (endolymph) lags, leading to bending of the stereocilia in the cupula, which initiates nerve impulses. This work by Cenveo is licensed under a Creative Commons Attribution 3.0 United States (http://creativecommons.org/licenses/by/3.0/us/).

At the base of each semicircular canal, where it meets with the vestibule is an enlarged region known as the ampulla, which contains a hair-cell containing structure, called the crista ampullaris that responds to rotational movement. The stereocilia of the hair cells extend into the cupula, a membrane that attaches to the top of the ampulla.

When the head rotates in a plane parallel to the semicircular canal, the fluid in the canal does not move as quickly as the head is moving. This pushes the cupula in the opposite direction, deflecting the stereocilia and creating a nerve impulse. Considering the semicircular canals on either side of the head, three orthogonal planes are defined, the horizontal plane with both horizontal canals, and two vertical planes 90o to each other with the anterior canal from one side and the posterior canal from the other. In each pair, deflection of the cupula on one side of the body causes depolarization of the hair cells while the same movement causes hyperpolarization of the hair cells on the other side of the body. For example, when the head rotates to the right, the horizontal canals are active and the right side depolarizes while the left hyperpolarizes, indicating the direction of the movement. By comparing the relative movements of all six semicircular canals, the vestibular system can establish movement in any direction within three-dimensional space.

Information from the vestibular apparatus projects to a wide range of structures in the brain. The information enters the brain via the vestibulocochlear nerve (cranial nerve VIII) where it synapses at vestibular nuclei in the pons and medulla. From here, information travels to a number of other regions to stimulate reflexes and develop our conscious awareness of position and movement.