Explain the importance of cell communication

Imagine what life would be like if you and the people around you could not communicate. You would not be able to express your wishes to others, nor could you ask questions to find out more about your environment. Social organization is dependent on communication between the individuals that comprise that society; without communication, society would fall apart . 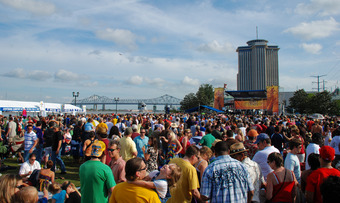 Have you ever become separated from a friend while in a crowd? If so, you know the challenge of searching for someone when surrounded by thousands of other people. If you and your friend have cell phones, your chances of finding each other are good. A cell phone’s ability to send and receive messages makes it an ideal communication device.

As with people, it is vital for individual cells to be able to interact with their environment. This is true whether a cell is growing by itself in a pond or is one of many cells that form a larger organism. In order to properly respond to external stimuli, cells have developed complex mechanisms of communication that can receive a message, transfer the information across the plasma membrane, and then produce changes within the cell in response to the message.

In multicellular organisms, cells send and receive chemical messages constantly to coordinate the actions of distant organs, tissues, and cells. The ability to send messages quickly and efficiently enables cells to coordinate and fine-tune their functions.

While the necessity for cellular communication in larger organisms seems obvious, even single-celled organisms communicate with each other. Yeast cells signal each other to aid mating. Some forms of bacteria coordinate their actions in order to form large complexes called biofilms or to organize the production of toxins to remove competing organisms. The ability of cells to communicate through chemical signals originated in single cells and was essential for the evolution of multicellular organisms. The efficient and error-free function of communication systems is vital for all forms of life.

The major types of signaling mechanisms that occur in multicellular organisms are paracrine, endocrine, autocrine, and direct signaling. 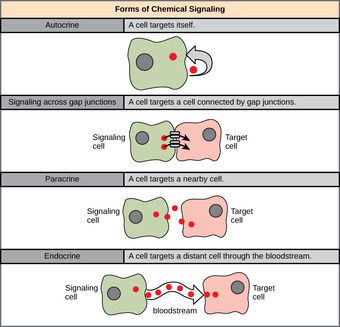 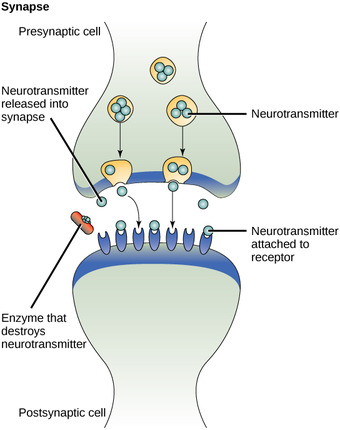 Signals from distant cells are called endocrine signals; they originate from endocrine cells. In the body, many endocrine cells are located in endocrine glands, such as the thyroid gland, the hypothalamus, and the pituitary gland. These types of signals usually produce a slower response, but have a longer-lasting effect. The ligands released in endocrine signaling are called hormones, signaling molecules that are produced in one part of the body, but affect other body regions some distance away.

Hormones travel the large distances between endocrine cells and their target cells via the bloodstream, which is a relatively slow way to move throughout the body. Because of their form of transport, hormones get diluted and are present in low concentrations when they act on their target cells. This is different from paracrine signaling in which local concentrations of ligands can be very high.

Gap junctions in animals and plasmodesmata in plants are connections between the plasma membranes of neighboring cells. These water-filled channels allow small signaling molecules, called intracellular mediators, to diffuse between the two cells. Small molecules, such as calcium ions (Ca2+), are able to move between cells, but large molecules, like proteins and DNA, cannot fit through the channels. The specificity of the channels ensures that the cells remain independent, but can quickly and easily transmit signals. The transfer of signaling molecules communicates the current state of the cell that is directly next to the target cell; this allows a group of cells to coordinate their response to a signal that only one of them may have received. In plants, plasmodesmata are ubiquitous, making the entire plant into a giant communication network.

Receptors are protein molecules in the target cell or on its surface that bind ligands. There are two types of receptors: internal receptors and cell-surface receptors.

Internal receptors, also known as intracellular or cytoplasmic receptors, are found in the cytoplasm of the cell and respond to hydrophobic ligand molecules that are able to travel across the plasma membrane. Once inside the cell, many of these molecules bind to proteins that act as regulators of mRNA synthesis to mediate gene expression. Gene expression is the cellular process of transforming the information in a cell’s DNA into a sequence of amino acids that ultimately forms a protein. When the ligand binds to the internal receptor, a conformational change exposes a DNA-binding site on the protein. The ligand-receptor complex moves into the nucleus, binds to specific regulatory regions of the chromosomal DNA, and promotes the initiation of transcription . Internal receptors can directly influence gene expression without having to pass the signal on to other receptors or messengers. 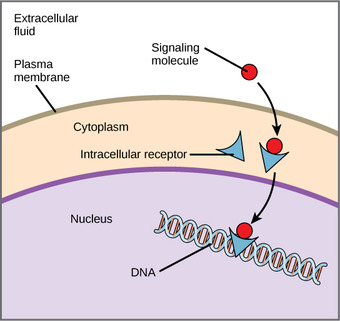 Each cell-surface receptor has three main components: an external ligand-binding domain (extracellular domain), a hydrophobic membrane-spanning region, and an intracellular domain inside the cell. The size and extent of each of these domains vary widely, depending on the type of receptor.

Ion channel-linked receptors bind a ligand and open a channel through the membrane that allows specific ions to pass through. To form a channel, this type of cell-surface receptor has an extensive membrane-spanning region. In order to interact with the phospholipid fatty acid tails that form the center of the plasma membrane, many of the amino acids in the membrane-spanning region are hydrophobic in nature. Conversely, the amino acids that line the inside of the channel are hydrophilic to allow for the passage of water or ions. When a ligand binds to the extracellular region of the channel, there is a conformational change in the protein’s structure that allows ions such as sodium, calcium, magnesium, and hydrogen to pass through . 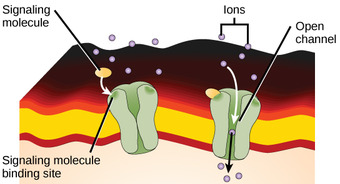 Gated ion channels form a pore through the plasma membrane that opens when the signaling molecule binds. The open pore then allows ions to flow into or out of the cell. 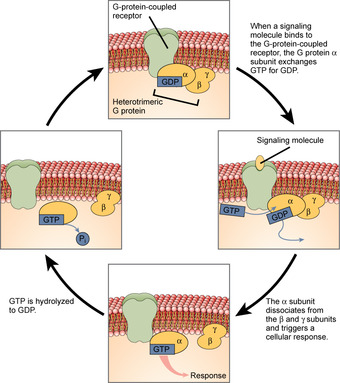 Heterotrimeric G proteins have three subunits: α, β, and γ. When a signaling molecule binds to a G-protein-coupled receptor in the plasma membrane, a GDP molecule associated with the α subunit is exchanged for GTP. The β and γ subunits dissociate from the α subunit, and a cellular response is triggered either by the α subunit or the dissociated β pair. Hydrolysis of GTP to GDP terminates the signal.

Signaling molecules are necessary for the coordination of cellular responses by serving as ligands and binding to cell receptors.

ligand
an ion, molecule, or functional group that binds to another chemical entity to form a larger complex
hydrophobic
lacking an affinity for water; unable to absorb, or be wetted by water

Produced by signaling cells and the subsequent binding to receptors in target cells, ligands act as chemical signals that travel to the target cells to coordinate responses. The types of molecules that serve as ligands are incredibly varied and range from small proteins to small ions like calcium (Ca2+).

Small hydrophobic ligands can directly diffuse through the plasma membrane and interact with internal receptors. Important members of this class of ligands are the steroid hormones. Steroids are lipids that have a hydrocarbon skeleton with four fused rings; different steroids have different functional groups attached to the carbon skeleton. Steroid hormones include the female sex hormone, estradiol, which is a type of estrogen; the male sex hormone, testosterone; and cholesterol, which is an important structural component of biological membranes and a precursor of steriod hormones . Other hydrophobic hormones include thyroid hormones and vitamin D. In order to be soluble in blood, hydrophobic ligands must bind to carrier proteins while they are being transported through the bloodstream. 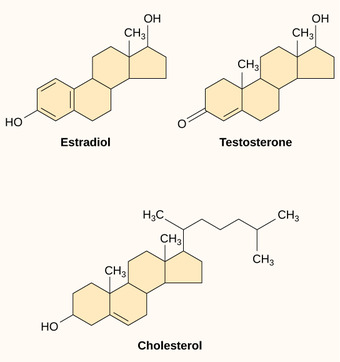 Steroid hormones have similar chemical structures to their precursor, cholesterol. Because these molecules are small and hydrophobic, they can diffuse directly across the plasma membrane into the cell, where they interact with internal receptors.

Water-soluble ligands are polar and, therefore, cannot pass through the plasma membrane unaided; sometimes, they are too large to pass through the membrane at all. Instead, most water-soluble ligands bind to the extracellular domain of cell-surface receptors. Cell-surface receptors include: ion-channel, G-protein, and enzyme-linked protein receptors. The binding of these ligands to these receptors results in a series of cellular changes. These water soluble ligands are quite diverse and include small molecules, peptides, and proteins.

Nitric oxide (NO) is a gas that also acts as a ligand. It is able to diffuse directly across the plasma membrane; one of its roles is to interact with receptors in smooth muscle and induce relaxation of the tissue. NO has a very short half-life; therefore, it only functions over short distances. Nitroglycerin, a treatment for heart disease, acts by triggering the release of NO, which causes blood vessels to dilate (expand), thus restoring blood flow to the heart.