What Is Organizational Communication?

Clearly, the task of preparing and submitting a finished sales report doesn’t require the same kinds of communication skills as talking on the phone with a classmate. No matter what your “workstation” happens to be—whether your workplace office or your kitchen table—you’re performing the task of preparing that sales report in an organizational setting. You’re still a sender transferring information to a receiver, but the organizational context of the task requires you to consider different factors for success in communicating effectively (including barriers to success). A report, for example, must be targeted for someone in a specific position and must contain the information necessary to make a specific set of decisions.[1]

Here’s another way of thinking about communication in an organizational setting. Let’s assume that you and the classmate you called on the phone are on roughly equal footing—you’re both juniors, your grades in the class are about the same, and so forth. Your phone conversation, therefore, is “lateral”: You belong to the same group (your accounting class), and your group activities take place on the same level.

Communication may also flow laterally in organizational settings (as it does between you and your classmate), but more often it flows up or down. Take a look at Figure 1, “Formal Communication Flows,” below, which shows the three directions in which communications can flow in a typical organization. [2] 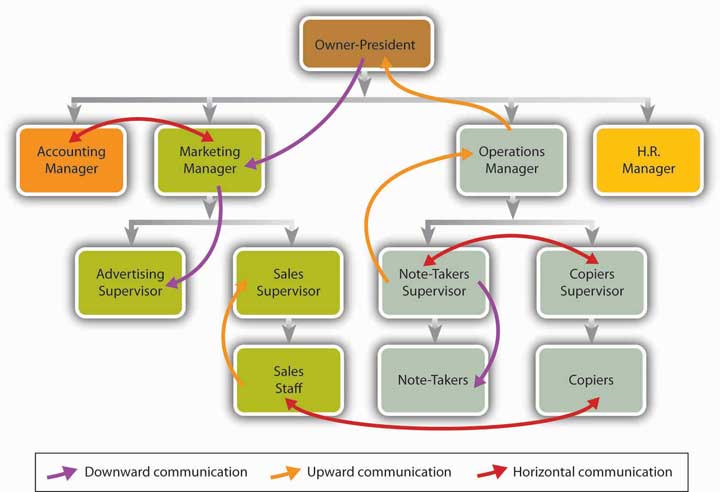 Naturally, each of these different directional flows has its functions and advantages. Downward communication, for example, is appropriate for giving instructions or directions—telling people what to do. (As a goal of communication, by the way, giving orders isn’t as one-sided as it may seem. One of the things that employees—the receivers—most want to know is: What, exactly, does my job entail?)[3] Like a sales report, upward communication usually provides managers with information that they need for making decisions, but it’s also the vehicle for new ideas, suggestions, and complaints. Horizontal communication supports efforts to coordinate tasks and otherwise help people work together.

And, of course, each type of flow has its disadvantages. As information seeps downward, for instance, it tends to lose some of its original clarity and often becomes distorted or downright wrong. (This is especially true when it’s delivered orally.) In addition, unlike Donald Trump, most people who are responsible for using downward communication don’t like delivering bad news (such as “You’re fired” or, more commonly, “Your job is being phased out”); as a result, bad news—including bad news that happens to be important news—is often ignored or disguised. The same thing may happen when bad news—say, a negative status report—must be sent upward.

Finally, while horizontal flows are valuable for promoting cooperation, they can also be used to engage in conflict—for instance, between two departments competing for the same organizational resources. The problem is especially bad when such horizontal communications breach official upward or downward lines of communication, thus bypassing managers who might be able to resolve the conflict.

Note that Figure 2, “Channels of Communication,” takes the form of a grid, thus creating four dimensions in which communication can take place. Informal communication, for example, can take place either among people within the company (internally) or between insiders and outsiders (externally). By and large, though you can use the same set of tools (memos, reports, phone calls) to communicate in any of these four situations, some tools (team blogs, news releases, supplier Web sites) are useful only in one or two.

Every company also has an informal communication network (or grapevine), which goes to work whenever two or more employees get together and start talking about the company and their jobs. Informal communication can take place just about anywhere (in one person’s cubicle, in the cafeteria, on the golf course) and by just about any means (phone, e-mail, instant messaging, face-to-face conversation).

Though it’s sometimes called the grapevine, an informal network is an extremely important communication channel. Why? For the simple reason that it’s typically widespread and can rarely be prevented, even if it’s not officially sanctioned by the company—indeed, even when the company tries to discourage or bypass it. Unofficial information crosses virtually every boundary drawn by a firm’s organization chart, reaching out and touching everyone in the organization, and what’s more, it travels a lot faster than official information.

Problems with the Flow of Information through Informal Channels

The downside of “unofficial” information should be obvious. Because much of it is communicated orally, it’s likely to get distorted and often degenerates into outright misinformation. Say, for example, that a rumor about layoffs gets started in your workplace. As more than one manager will verify, such rumors can do more damage than the reality. Morale may plummet and productivity won’t be far behind. Valuable employees may abandon ship (needlessly, if the rumors are false).[6]

And imagine what can happen if informal information gets outside the organization. In the 1970s, Chicago-area McDonald’s outlets found themselves fighting rumors about worms in their hamburgers. Over the years, Coca-Cola has had to fight rumors about terrorists joining its organization, subversive messages concealed in its label, and hyperacidity (false rumors that Coke causes osteoporosis and makes a good pesticide and an equally good spermicide).[7]

What to Do about Informal Information Flows

On the upside, savvy managers can tap into the informal network, either to find out what sort of information is influencing employee activities or to circulate more meaningful information, including new ideas as well as corrective information. In any case, managers have to deal with the grapevine, and one manager has compiled a list of suggestions for doing so effectively:[8]

Perhaps most important, when alert managers notice that the grapevine is particularly active, they tend to reach a sensible twofold conclusion:

Let’s go back to our example of a workplace overwhelmed by layoff rumors. In a practical sense, what can a manager—say, the leader of a long-term product-development team—do to provide better communication? One manager suggests at least three specific responses:[9]

Because actions of this sort send a message, they can legitimately be characterized as a form of formal communication. They also reflect good leadership: Even though the information in this case relates only indirectly to immediate team tasks, you’re sharing information with people who need it, and you’re demonstrating integrity (you’re being honest, and you’re following through on a commitment to the team).