One of the early alternatives to job specialization was job rotation, which involves moving employees from job to job at regular intervals, thereby relieving the monotony and boredom typical in repetitive jobs. For example, Maids International, a company that provides cleaning services to households and businesses, uses job rotation such that maids cleaning the kitchen in one house would clean the bedroom in another house.[1] Using this technique, among others, the company was able to reduce its turnover level. In a study conducted in a supermarket, cashiers were rotated to work in different departments. As a result of the rotation, employee stress level was reduced as measured by their blood pressure. Moreover, they reported fewer pain symptoms in their neck and shoulders.[2]

Job rotation has a number of advantages for organizations. It’s an effective way for employees to acquire new skills, as the rotation involves cross-training to new tasks; this means that organizations increase the overall skill level of their employees.[3]  In addition, job rotation is a means of knowledge transfer between departments.[4] For the employees, rotation is a benefit because they acquire new skills, which keeps them marketable in the long run.

Anecdotal evidence suggests that companies successfully rotate high-level employees to train their managers and increase innovativeness in the company. For example, Nokia uses rotation at all levels, such as assigning lawyers to act as country managers or moving network engineers to handset design. These approaches are thought to bring a fresh perspective to old problems.[5]  India’s information technology giant Wipro, which employs about 80,000 employees, uses a 3-year plan to groom future leaders of the company by rotating them through different jobs.[6]

Job enlargement refers to expanding the tasks performed by employees to add more variety. Like job rotation, job enlargement can reduce boredom and monotony as well as use human resources more effectively. When jobs are enlarged, employees view themselves as being capable of performing a broader set of tasks.[7]  Job enlargement is positively related to employee satisfaction and higher-quality customer services, and it increases the chances of catching mistakes.[8]  At the same time, the effects of job enlargement may depend on the type of enlargement. For example, exclusively giving employees simpler tasks had negative consequences on employee satisfaction with the job of catching errors, whereas giving employees more tasks that require them to be knowledgeable in different areas seemed to have more positive effects.[9]

Job enrichment is a job redesign technique that allows workers more control over how they perform their own tasks, giving them more responsibility. As an alternative to job specialization, companies using job enrichment may experience positive outcomes such as reduced turnover, increased productivity, and reduced absences.[10] This may be because employees who have the authority and responsibility over their own work can be more efficient, eliminate unnecessary tasks, take shortcuts, and overall increase their own performance. At the same time, there is some evidence that job enrichment may sometimes cause employees to be dissatisfied.[11]  The reason may be that employees who are given additional autonomy and responsibility may expect greater levels of pay or other types of compensation, and if this expectation is not met, they may feel frustrated. One more thing to remember is that job enrichment may not be suitable for all employees.[12]  Not all employees desire to have control over how they work, and if they do not have this desire, they may feel dissatisfied in an enriched job.

The job characteristics model is one of the most influential attempts to design jobs to increase their motivational properties.[13] Proposed in the 1970s by Hackman and Oldham, the model describes five core job dimensions, leading to three critical psychological states, which lead to work-related outcomes. In this model, shown in Figure 1 below, there are five core job dimensions.

Task significance refers to whether the person’s job substantially affects other people’s work, health, or well-being. A janitor who cleans the floor at an office building may find the job low in significance, thinking it is not an important job. However, janitors cleaning the floors at a hospital may see their role as essential in helping patients recover in a healthy environment. When they see their tasks as significant, employees tend to feel that they are making an impact on their environment and their feelings of self worth are boosted.[14]

Autonomy is the degree to which the person has the freedom to decide how to perform tasks. As an example, a teacher who is required to follow a predetermined textbook, cover a given list of topics, and use a specified list of classroom activities has low autonomy, whereas a teacher who is free to choose the textbook, design the course content, and use any materials she sees fit has higher levels of autonomy. Autonomy increases motivation at work, but it also has other benefits. Autonomous workers are less likely to adopt a “this is not my job” attitude and instead be proactive and creative.[15] Giving employees autonomy is also a great way to train them on the job. For example, Gucci’s CEO Robert Polet describes autonomy he received while working at Unilever as the key to his development of leadership talents.[16]

Feedback refers to the degree to which the person learns how effective he or she is at work. Feedback may come from other people such as supervisors, peers, subordinates, customers, or from the job. A salesperson who makes informational presentations to potential clients but is not informed whether they sign up has low feedback. If this salesperson receives a notification whenever someone who has heard his presentation becomes a client, feedback will be high.

The mere presence of feedback is not sufficient for employees to feel motivated to perform better, however. In fact, in about one-third of the cases, feedback was detrimental to performance.[17] In addition to whether feedback is present, the character of the feedback (positive or negative), whether the person is ready to receive the feedback, and the manner in which feedback was given will all determine whether employees feel motivated or demotivated as a result of feedback.

Goal setting theory[18] is one of the most influential and practical theories of motivation. It has been supported in over 1,000 studies with employees, ranging from blue-collar workers to research and development employees, and there is strong evidence that setting goals is related to performance improvements.[19]  In fact, according to one estimate, goal setting improves performance between 10% and 25% or more.[20] On the basis of evidence such as this, thousands of companies around the world are using goal setting in some form, including companies such as Coca-Cola, PricewaterhouseCoopers, Nike, Intel, and Microsoft to name a few.

Accumulating research evidence indicates that effective goals are SMART. SMART goals are specific, measurable, achievable, realistic, and timely. Here is a sample SMART goal: Wal-Mart recently set a goal to eliminate 25% of the solid waste from its U.S. stores by the year 2009. This goal meets all the conditions of being SMART if we assume that it is an achievable goal.[21]  Even though it seems like a simple concept, in reality many goals that are set within organizations may not be SMART. For example, Microsoft recently conducted an audit of its goal-setting and performance review system and found that only about 40% of the goals were specific and measurable.[22]

Why Do SMART Goals Motivate? 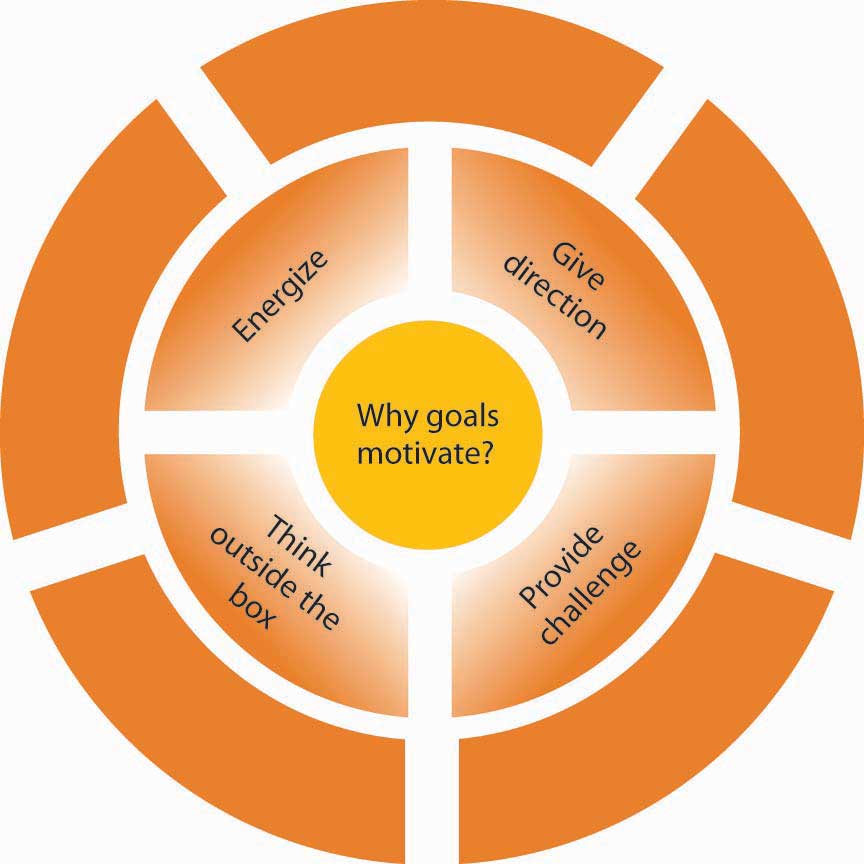 Figure 2. Why do SMART goals motivate?

There are at least four reasons why goals motivate.[23]  First, goals give us direction; therefore, goals should be set carefully. Giving employees goals that are not aligned with company goals will be a problem because goals will direct employee’s energy to a certain end. Second, goals energize people and tell them not to stop until they reach that point. Third, having a goal provides a challenge. When people have goals and when they reach them, they feel a sense of accomplishment. Finally, SMART goals urge people to think outside the box and rethink how they are working. If a goal is substantially difficult, merely working harder will not get you the results. Instead, you will need to rethink the way you usually work and devise a creative way of working. It has been argued that this is how designers and engineers in Japan came up with the bullet train. Having a goal that went way beyond the current speed of trains prevented engineers from making minor improvements and urged them to come up with a radically different concept.[24]

Are There Downsides to Goal Setting?

As with any management technique, there may be some downsides to goal setting.[25]  First, setting goals for specific outcomes may hamper employee performance if employees lack skills and abilities to reach the goals. In these situations, setting goals for behaviors and for learning may be more effective than setting goals for outcomes. Second, goal setting may motivate employees to focus on a goal and ignore the need to respond to new challenges. For example, one study found that when teams had difficult goals and when employees within the team had high levels of performance orientation, teams had difficulty adapting to unforeseen circumstances.[26]  Third, goals focus employee attention on the activities that are measured, which may lead to sacrificing other important elements of performance. When goals are set for production numbers, quality may suffer. As a result, it is important to set goals touching on all critical aspects of performance. Finally, aggressive pursuit of goals may lead to unethical behaviors. Particularly when employees are rewarded for goal accomplishment but there are no rewards whatsoever for coming very close to reaching the goal, employees may be tempted to cheat.

None of these theories are complete by themselves, but each theory provides us with a framework we can use to analyze, interpret, and manage employee behaviors in the workplace, which are important skills managers use when conducting their leading function. In fact, motivation is important throughout the entire P-O-L-C framework because most managerial functions involve accomplishing tasks and goals through others.

By properly tying rewards to positive behaviors, eliminating rewards following negative behaviors and punishing negative behaviors, leaders can increase the frequency of desired behaviors. In job design, there are five components that increase the motivating potential of a job: Skill variety, task identity, task significance, autonomy, and feedback. These theories are particularly useful in designing reward systems within a company. Goal-setting theory is one of the most influential theories of motivation. To motivate employees, goals should be SMART (specific, measurable, achievable, realistic, and timely). Setting goals and objectives is a task managers undertake when involved in the planning portion of the P-O-L-C function.