Without a plan, it’s hard to succeed at anything. The reason is simple: if you don’t know where you’re going, you can’t really move forward. Successful managers decide where they want to be and then figure out how to get there. In planning, managers set goals and determine the best way to achieve them. As a result of the planning process, everyone in the organization knows what should be done, who should do it, and how it should be done.

Coming up with an idea—starting a note-taking business —is a good start, but it’s only a start. Planning for it is a step forward. Planning begins at the highest level and works its way down through the organization. Step one is usually called strategic planning, which is the process of establishing an overall course of action. To begin this process, you should ask yourself a couple of very basic questions: Why, for example, does the organization exist? What value does it create? After you’ve identified the purpose of your company, you’re ready to take the remaining steps in the strategic-planning process:

In the next few sections, we’ll examine these components of the strategic-planning process.

Mission statements can be very concise, like the one from Mary Kay Inc. (the cosmetics company):

To enrich the lives of women around the world.[1]

Or it can be as detailed as the one from Harley-Davidson:

We fulfill dreams inspired by the many roads of the world by providing extraordinary motorcycles and customer experiences. We fuel the passion for freedom in our customers to express their own individuality.”[2]

Having defined your mission, your next step is to ask, what does this organization stand for? What values will define it? What principles should guide our actions as we build and operate the business? The set of guiding principles that you identify as crucial to your company are known as core values—fundamental beliefs about what’s important and what is and isn’t appropriate in conducting company activities. Core values affect the overall planning processes and operations. At Volvo, for example, three core values—safety, quality, and environmental care—define the firm’s “approach to product development, design and production.”[3] Core values should also guide the behavior of every individual in the organization. Coca-Cola, for instance, reports that its stated core values—leadership, collaboration, integrity, accountability, passion, diversity and quality—tell employees exactly what behaviors are acceptable.[4] How do companies communicate core values to employees and hold them accountable for putting those values into practice? They link core values to performance evaluations and compensation.

The next step in the strategic-planning process is to assess your company’s fit with its environment. A common approach to environmental analysis is matching the strengths of your business with the opportunities available to it. It’s called SWOT analysis because it calls for analyzing an organization’s Strengths, Weaknesses, Opportunities, and Threats. It begins with an examination of external factors that could influence the company in either a positive or a negative way. These could include economic conditions, competition, emerging technologies, laws and regulations, and customers’ expectations.

One purpose of assessing the external environment is to identify both opportunities that could benefit the company and threats to its success. For example, a company that manufactures children’s bicycle helmets would view a change in federal law requiring all children to wear helmets as an opportunity. The news that two large sports-equipment companies were coming out with bicycle helmets would be a threat.

The next step is to evaluate the company’s strengths and weaknesses. Strengths might include a motivated workforce, state-of-the-art technology, impressive managerial talent, or a desirable location. The opposite of any of these strengths (poor workforce, obsolete technology, incompetent management, or poor location) could signal a potential weakness. Armed with a good idea of external opportunities and threats, as well as internal strengths and weaknesses, managers want to capitalize on opportunities by taking advantage of organizational strengths. Likewise, they want to protect the organization from both external threats and internal weaknesses. 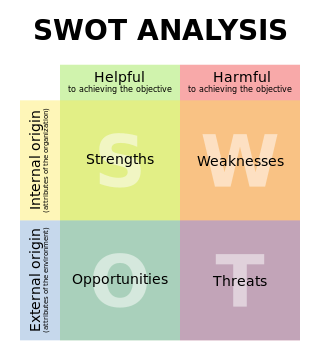 Your mission statement affirms what your organization is generally committed to doing, but it doesn’t tell you how to do it. So the next step in the strategic-planning process is establishing goals and objectives. Goals are major accomplishments that the company wants to achieve over a long period (say, five years). Objectives are shorter-term performance targets that direct the activities of the organization toward the attainment of a goal. They should be clearly stated, attainable, and measurable: they should give target dates for the completion of tasks and stipulate who’s responsible for taking necessary actions.[5]

An organization will have a number of goals and related objectives. Some will focus on financial measures, such as profit maximization and sales growth. Others will target operational efficiency or quality control. Still others will govern the company’s relationships with its employees, its community, its environment, or all three.

Finally, goals and objectives change over time. As a firm reassesses its place in its business environment, it rethinks not only its mission but also its approach to fulfilling it. The reality of change was a major theme when the late McDonald’s CEO Jim Cantalupo explained his goal to revitalize the company:

The world has changed. Our customers have changed. We have to change too. Growth comes from being better, not just expanding to have more restaurants. The new McDonald’s is focused on building sales at existing restaurants rather than on adding new restaurants. We are introducing a new level of discipline and efficiency to all aspects of the business and are setting a new bar for performance.[6]

This change in focus was accompanied by specific performance objectives—annual sales growth of 3 to 5 percent and income growth of 6 to 7 percent at existing restaurants, plus a five-point improvement (based on customer surveys) in speed of service, friendliness, and food quality.

The planning process begins at the top of the organization, where upper-level managers create a strategic plan, but it doesn’t end there. The execution of the strategic plan involves managers at all levels.

The tactical plan is then broken down into various operational plans that provide detailed action steps to be taken by individuals or groups to implement the tactical plan and, consequently, the strategic plan. Operational plans cover only a brief period—say, a week or a month. At Notes-4-You, for example, notetakers might be instructed to turn in typed class notes five hours earlier than normal on the last day of the semester (an operational guideline). The goal is to improve the customer-satisfaction score on dependability (a tactical goal) and, as a result, to earn the loyalty of students through attention to customer service (a strategic goal).

Plan for Contingencies and Crises

Even with great planning, things don’t always turn out the way they’re supposed to. Perhaps your plans were flawed, or maybe you had great plans but something in the environment shifted unexpectedly. Successful managers anticipate and plan for the unexpected. Dealing with uncertainty requires contingency planning and crisis management.

With contingency planning, managers identify those aspects of the business that are most likely to be adversely affected by change. Then, they develop alternative courses of action in case an anticipated change does occur. You probably do your own contingency planning: for example, if you’re planning to take in a sure-fire hit movie on its release date, you may decide on an alternative movie in case you can’t get tickets to your first choice.

Organizations also face the risk of encountering crises that require immediate attention. Rather than waiting until such a crisis occurs and then scrambling to figure out what to do, many firms practice crisis management. Some, for instance, set up teams trained to deal with emergencies. Members gather information quickly and respond to the crisis while everyone else carries out his or her normal duties. The team also keeps the public, the employees, the press, and government officials informed about the situation and the company’s response to it.[7]

An example of how to handle crisis management involves Wendy’s. After learning that a woman claimed she found a fingertip in a bowl of chili she bought at a Wendy’s restaurant in San Jose, California, the company’s public relations team responded quickly. Within a few days, the company announced that the finger didn’t come from an employee or a supplier. Soon after, the police arrested the woman and charged her with attempted grand larceny for lying about how the finger got in her bowl of chili and trying to extort $2.5 million from the company. But the crisis wasn’t over for Wendy’s. The incident was plastered all over the news as a grossed-out public sought an answer to the question “Whose finger is (or was) it?” A $100,000 reward was offered by Wendy’s to anyone with information that would help the police answer this question. The challenge Wendy’s faced was how to entice customers to return to its fifty San Francisco–area restaurants (where sales had plummeted) while keeping a low profile nationally. It accomplished this by giving out free milkshakes and discount coupons to customers in the affected regions and, to avoid calling attention to the missing finger, by making no changes in its national advertising. The crisis-management strategy worked and the story died down (though it flared up temporarily when the police arrested the woman’s husband, who allegedly bought the finger from a coworker who had severed it in an accident months earlier).[8]

The response to the BP oil spill by its former CEO, Tony Hayward, is an example of poor crisis management.

Even with crisis-management plans in place, however, it is unlikely that most companies will emerge from a damaging or potentially damaging episode as unscathed as Wendy’s did. For one thing, the culprits in the Wendy’s case were caught, and the public is willing to forgive an organization it views as a victim. Given the current public distrust of corporate behavior, however, companies whose reputations have suffered due to questionable corporate judgment don’t fare as well. These companies include the international oil company, BP, whose CEO, Tony Hayward, did a disastrous job handling the crisis created when a BP controlled oil rig exploded in the Gulf Coast killing eleven workers and creating the largest oil spill in U.S. history. Hayward’s lack of sensitivity will be remembered forever; particularly his response to a reporter’s question on what he would tell those whose livelihoods were ruined: “We’re sorry for the massive disruption it’s caused their lives. There’s no one who wants this over more than I do. I would like my life back.” His comment was obviously upsetting to the families of the eleven men who lost their lives on the rig and had no way to get their lives back.[9]

Given the high risk associated with a crisis, it should come as no surprise that contemporary managers spend more time anticipating crises and practicing their crisis-management responses.