By and large, managers can control the four Ps of the marketing mix: they can decide which products to offer, what prices to charge for them, how to distribute them, and how to reach target audiences. Unfortunately, there are other forces at work in the marketing world—forces over which marketers have much less control. These forces make up a company’s external marketing environment, which, as you can see in Figure 1, “The Marketing Environment,” can be divided into five sets of factors: 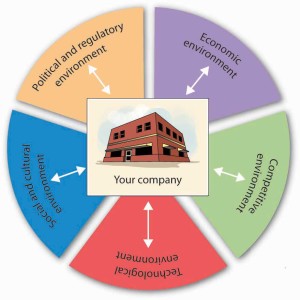 These factors—and changes in them—present both threats and opportunities that require shifts in marketing plans. To spot trends and other signals that conditions may be in flux, marketers must continually monitor the environment in which their companies operate. To get a better idea of how they affect a firm’s marketing activities, let’s look at each of the five areas of the external environment.

The Political and Regulatory Environment

Federal, state, and local bodies can set rules or restrictions on the conduct of businesses. The purpose of regulation is to protect both consumers and businesses. Businesses favor some regulations (such as patent laws) while chafing under others (such as restrictions on advertising). The tobacco industry, for example, has had to learn to live with a federal ban on TV and radio advertising. More recently, many companies in the food industry have expressed unhappiness over regulations requiring the labeling of trans-fat content. The broadcasting industry is increasingly concerned about fines being imposed by the Federal Communications Commission for offenses against “standards of decency.” The loudest outcry probably came from telemarketers in response to the establishment of “do-not-call” registries. All these actions occasioned changes in the marketing strategies of affected companies. Tobacco companies rerouted advertising dollars from TV to print media. Food companies reduced trans-fat levels and began targeting health-conscious consumers. Talent coordinators posted red flags next to the names of Janet Jackson (of the now-famous malfunctioning costume) and other performers. The telemarketing industry fired workers and scrambled to reinvent its entire business model.

Every day, marketing managers face a barrage of economic news. They must digest it, assess its impact, and alter marketing plans accordingly. Sometimes (but not recently), the news is cause for optimism—the economy’s improving, unemployment’s declining, consumer confidence is up. At other times (like today), the news makes them nervous—our economy is weak, industrial production is down, jobless claims are rising, consumer confidence has plummeted, credit is hard to get. Naturally, business thrives when the economy is growing, employment is full, and prices are stable. Marketing products is easier because consumers are willing to buy. On the other hand, when the economy is slowing (or stalled) and unemployment is rising, people have less money to spend, and the marketer’s job is harder. Then there’s inflation, which pushes interest rates upward. If you’re trying to sell cars, you know that people facing higher interest rates aren’t so anxious to take out car loans. Sales will slip, and to counteract the anticipated slowdown, you might have to add generous rebates to your promotional plans. Moreover, if you operate in foreign markets, you can’t focus on solely domestic economic conditions: you have to monitor the economy in every region where you do business. For example, if you’re the marketing director for a U.S. company whose goods are manufactured in China and sold in Brazil, you’ll need to know as much as you can about the economies in three countries: the United States, China, and Brazil. For one thing, you’ll have to pay particular attention to fluctuations in exchange rates, because changes will affect both your sales and your profits.

Imagine playing tennis without watching what your opponent was doing. Marketers who don’t pay attention to their competitors are playing a losing game. In particular, they need to monitor the activities of two groups of competitors: the makers of competing brands and the makers of substitute products. Coke and Pepsi, for instance, are brand competitors who have engaged in the so-called cola wars for decades. Each tries to capture market share by convincing people that its soft drinks are better. Because neither wants to lose share to the other, they tend to resort to similar tactics. In summer 2004, both companies came out with nearly identical new colas boasting half the sugar, half the calories, and half the carbohydrates of regular colas. Coke called its product Coke C2, while Pepsi named its competing brand PepsiEdge. Both companies targeted cola drinkers who want the flavor of a regular soda but fewer calories. (By the way, both products failed and were taken off the market.) Meanwhile, Coke and Pepsi have to watch Nantucket Nectars, whose fruit drinks are substitute products. What if Nantucket Nectars managed to get its drinks into the soda machines at more fast-food restaurants? How would Coke and Pepsi respond? What if Nantucket Nectars, which markets an ice tea with caffeine, introduced an ice tea drink with mega amounts of caffeine? Would marketers at Coke and Pepsi take action? What if Nantucket Nectars launched a marketing campaign promoting the health benefits of fruit drinks over soda? Would Coke and Pepsi reply with campaigns of their own? Would they respond by introducing new non-cola products?

When’s the last time you rented a DVD of a new movie? And do you even remember ever renting a videotape? Technology evolves rapidly and these days, videotapes are long since past. While DVDs are still common, Blu-ray, digital downloads and on-demand services are the more forward-looking formats for people who want to watch movies at home. Hopefully one-time videotape makers monitored technological trends in the industry and took steps to keep up or otherwise protect themselves from losses (maybe even getting out of the market). In addition to making old products obsolete, technological advances create new products. Where would we be without the cell phone, digital cameras, text messaging, LASIK surgery, and global positioning systems? New technologies also transform the marketing mix in another important way: they alter the way companies market their products. Consider the revolutionary changes brought about by the Internet, which offers marketers a new medium for promoting and selling a vast range of goods and services. Marketers must keep abreast of technological advances and adapt their strategies, both to take advantage of the opportunities and to ward off threats.

The Social and Cultural Environment

Marketers also have to stay tuned to social and cultural factors that can affect sales. The values and attitudes of American consumers are in a state of almost constant flux; what’s cool one year is out of style the next. Think about the clothes you wore five years ago: would you wear them today? A lot of people wouldn’t—they’re the wrong style, the wrong fit, the wrong material, the wrong color, or just plain wrong. Now put yourself in the place of a marketer for a clothing company that targets teenagers and young adults. You wouldn’t survive if you tried to sell the same styles every year. As we said at the outset of this chapter, the key to successful marketing is meeting the needs of customers. This means knowing what they want right now, not last year. Here’s another illustration. The last few decades have witnessed monumental shifts in the makeup of the American workforce. The number of women at all levels has increased significantly, the workforce has become more diverse, and telecommuting is more common. More people place more importance on balancing their work lives with the rest of their lives, and fewer people are willing to sacrifice their health to the demands of hectic work schedules. With these changes have come new marketing opportunities. As women spend more time at work, the traditional duties of the “homemaker” have shifted to day-care centers, nannies, house-cleaning services, and (for those who can afford them) child chauffeurs, birthday-party coordinators, and even family-photo assemblers.[1] The number of gyms has mushroomed, the selection of home office furniture has expanded, and McDonald’s has bowed to the wishes of the health-conscious by eliminating its “super-size” option.