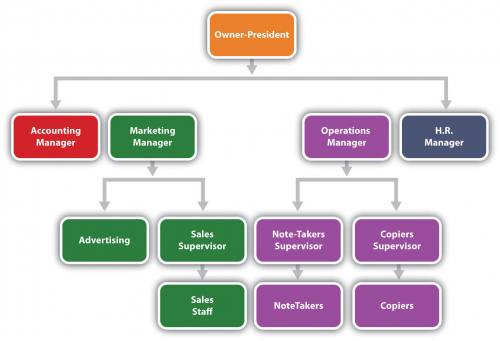 Using the figure above for reference you can complete a hypothetical organization chart. Begin by putting yourself at the top of the chart, as the company’s president. Then fill in the level directly below your name with the names and positions of the people who work directly for you—your accounting, marketing, operations, and human resources managers. The next level identifies the people who work for these managers. In this example, because you’ve started out small, neither your accounting manager nor your human resources manager currently manage anyone directly. Your marketing manager, however, oversees one person in advertising and a sales supervisor (who, in turn, oversees the sales staff). Your operations manager oversees two individuals—one to supervise notetakers and one to supervise people responsible for making copies.

With these relationships in mind, you can now draw lines to denote reporting relationships, or patterns of formal communication. Because four managers report to you, you’ll be connected to four positions; that is, you’ll have four direct “reports.” Your marketing and operations managers will each be connected to two positions and their supervisors to one position each. The organization chart shows that if a member of the sales staff has a problem, he or she will report it to the sales supervisor. If the sales supervisor believes that the problem should be addressed at a higher level, then he or she will report it to the marketing manager.

Now let’s look at the chart of an organization that relies on a divisional structure based on goods or services produced—say, a theme park. The top layers of this company’s organization chart might look like the one in Figure 2a. We see that the president has two direct reports—a vice president in charge of rides and a vice president in charge of concessions. What about a bank that’s structured according to its customer base? The bank’s organization chart would begin like the one in Figure 2b. Once again, the company’s top manager has two direct reports, in this case a VP of retail-customer accounts and a VP of commercial-customer accounts.

Over time, companies revise their organizational structures to accommodate growth and changes in the external environment. It’s not uncommon, for example, for a firm to adopt a functional structure in its early years. Then, as it becomes bigger and more complex, it might move to a divisional structure—perhaps to accommodate new products or to become more responsive to certain customers or geographical areas. Some companies might ultimately rely on a combination of functional and divisional structures. This could be a good approach for a credit card company that issues cards in both the United States and Europe. A skeleton of this firm’s organization chart might look like the one in Figure 3.

You can learn a lot about a firm’s reporting and authority relationships by looking at its organization chart. To whom does a particular person report? Does each person report to one or more supervisors? How many people does a manager supervise? How many layers are there, for example, between the top managerial position and the lowest managerial level?

The vertical connecting lines in the organization chart show the firm’s chain of command: the authority relationships among people working at different levels of the organization. That is to say, they show who reports to whom. When you’re examining an organization chart, you’ll probably want to know whether each person reports to one or more supervisors: to what extent, in other words, is there unity of command? To understand why unity of command is an important organizational feature, think about it from a personal standpoint. Would you want to report to more than one boss? What happens if you get conflicting directions? Whose directions would you follow?

There are, however, conditions under which an organization and its employees can benefit by violating the unity-of-command principle. Under a matrix structure, for example, employees from various functional areas (product design, manufacturing, finance, marketing, human resources, etc.) form teams to combine their skills in working on a specific project or product. This matrix organization chart might look like the one in the following figure. 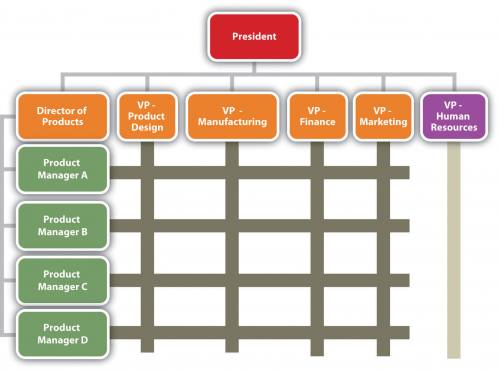 Nike sometimes uses this type of arrangement. To design new products, the company may create product teams made up of designers, marketers, and other specialists with expertise in particular sports categories—say, running shoes or basketball shoes. Each team member would be evaluated by both the team manager and the head of his or her functional department.

Another thing to notice about a firm’s chain of command is the number of layers between the top managerial position and the lowest managerial level. As a rule, new organizations have only a few layers of management—an organizational structure that’s often called flat. Let’s say, for instance, that a member of the  sales staff wanted to express concern about slow sales among a certain group of customers. That person’s message would have to filter upward through only two management layers—the sales supervisor and the marketing manager—before reaching the president.

As a company grows, however, it tends to add more layers between the top and the bottom; that is, it gets taller. Added layers of management can slow down communication and decision making, causing the organization to become less efficient and productive. That’s one reason why many of today’s organizations are restructuring to become flatter.

There are trade-offs between the advantages and disadvantages of flat and tall organizations. Companies determine which trade-offs to make according to a principle called span of control, which measures the number of people reporting to a particular manager. If, for example, you remove layers of management to make your organization flatter, you end up increasing the number of positions reporting to a particular supervisor.

Given the tendency toward flatter organizations and wider spans of control, how do managers handle increased workloads? They must learn how to handle delegation—the process of entrusting work to subordinates. Unfortunately, many managers are reluctant to delegate. As a result, they not only overburden themselves with tasks that could be handled by others, but they also deny subordinates the opportunity to learn and develop new skills.

As owner of a business an individual may want to control every aspect of the business, especially during the start-up stage. But as the organization grows, they will have to assign responsibility for performing certain tasks to other people. They will  also have to accept the fact that responsibility alone—the duty to perform a task—won’t be enough to get the job done. They will need to grant subordinates the authority they require to complete a task—that is, the power to make the necessary decisions. (And they’ll also need sufficient resources.) Ultimately, the owner will also hold his/her subordinates accountable for their performance.

If and when a company expands, the owner will  have to decide whether most decisions should still be made by individuals at the top or delegated to lower-level employees. The first option, in which most decision making is concentrated at the top, is called centralization. The second option, which spreads decision making throughout the organization, is called decentralization. Naturally, there are some decisions—such as strategic planning—that won’t be delegated to lower-level employees, but others can be delegated, such as the management of copy-center operations. In fact, putting someone in charge of this function would probably improve customer satisfaction, because copy-center customers would be dealing directly with the manager. It would also give the manager valuable decision-making experience, and while he or she is busy making daily decisions about the copy center, upper level management and owners will have more time to work on higher-level tasks.