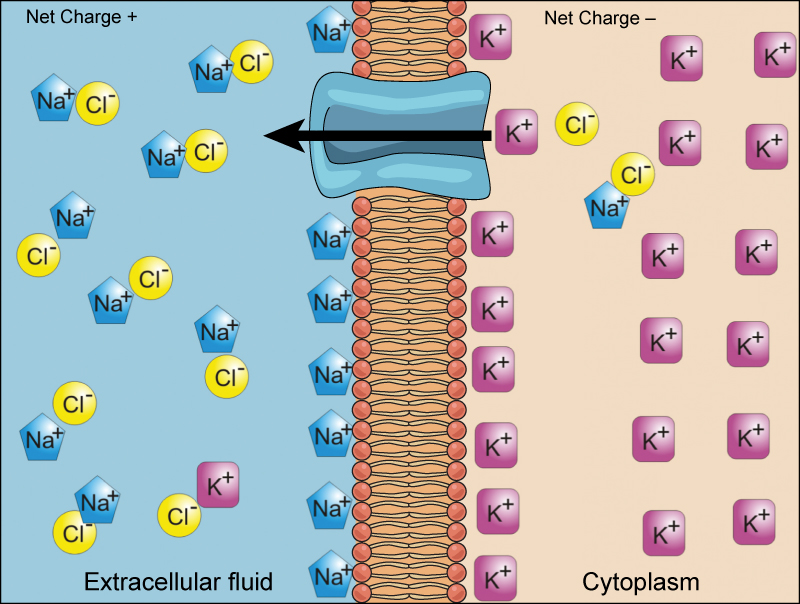 To move substances against a concentration or an electrochemical gradient, the cell must use energy. This energy is harvested from ATP that is generated through cellular metabolism. Active transport mechanisms, collectively called pumps or carrier proteins, work against electrochemical gradients. With the exception of ions, small substances constantly pass through plasma membranes. Active transport maintains concentrations of ions and other substances needed by living cells in the face of these passive changes. Much of a cell’s supply of metabolic energy may be spent maintaining these processes. Because active transport mechanisms depend on cellular metabolism for energy, they are sensitive to many metabolic poisons that interfere with the supply of ATP.

Two mechanisms exist for the transport of small-molecular weight material and macromolecules. Primary active transport moves ions across a membrane and creates a difference in charge across that membrane. The primary active transport system uses ATP to move a substance, such as an ion, into the cell, and often at the same time, a second substance is moved out of the cell. The sodium-potassium pump, an important pump in animal cells, expends energy to move potassium ions into the cell and a different number of sodium ions out of the cell (Figure 2). The action of this pump results in a concentration and charge difference across the membrane.

Endocytosis is a type of active transport that moves particles, such as large molecules, parts of cells, and even whole cells, into a cell. There are different variations of endocytosis, but all share a common characteristic: The plasma membrane of the cell invaginates, forming a pocket around the target particle. The pocket pinches off, resulting in the particle being contained in a newly created vacuole that is formed from the plasma membrane.

Phagocytosis is the process by which large particles, such as cells, are taken in by a cell. For example, when microorganisms invade the human body, a type of white blood cell called a neutrophil removes the invader through this process, surrounding and engulfing the microorganism, which is then destroyed by the neutrophil (Figure 3).

A targeted variation of endocytosis employs binding proteins in the plasma membrane that are specific for certain substances (Figure 3). The particles bind to the proteins and the plasma membrane invaginates, bringing the substance and the proteins into the cell. If passage across the membrane of the target of receptor-mediated endocytosis is ineffective, it will not be removed from the tissue fluids or blood. Instead, it will stay in those fluids and increase in concentration. Some human diseases are caused by a failure of receptor-mediated endocytosis. For example, the form of cholesterol termed low-density lipoprotein or LDL (also referred to as “bad” cholesterol) is removed from the blood by receptor-mediated endocytosis. In the human genetic disease familial hypercholesterolemia, the LDL receptors are defective or missing entirely. People with this condition have life-threatening levels of cholesterol in their blood, because their cells cannot clear the chemical from their blood. 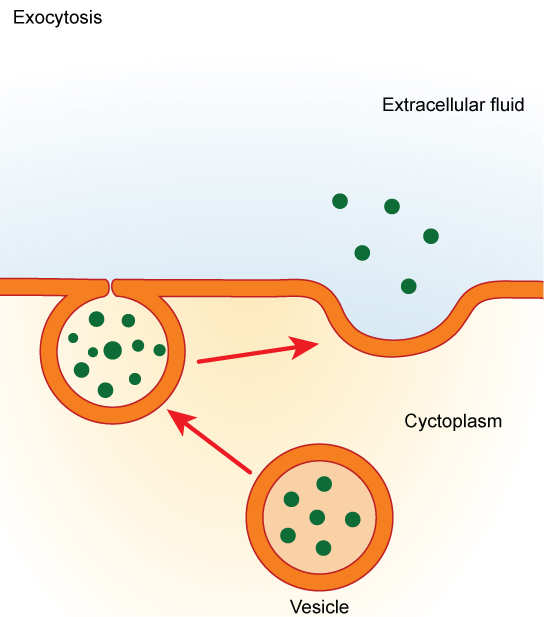 Figure 4. In exocytosis, a vesicle migrates to the plasma membrane, binds, and releases its contents to the outside of the cell. (credit: modification of work by Mariana Ruiz Villarreal)

In contrast to these methods of moving material into a cell is the process of exocytosis. Exocytosis is the opposite of the processes discussed above in that its purpose is to expel material from the cell into the extracellular fluid. A particle enveloped in membrane fuses with the interior of the plasma membrane. This fusion opens the membranous envelope to the exterior of the cell, and the particle is expelled into the extracellular space (Figure 4).

The combined gradient that affects an ion includes its concentration gradient and its electrical gradient. Living cells need certain substances in concentrations greater than they exist in the extracellular space. Moving substances up their electrochemical gradients requires energy from the cell. Active transport uses energy stored in ATP to fuel the transport. Active transport of small molecular-size material uses integral proteins in the cell membrane to move the material—these proteins are analogous to pumps. Some pumps, which carry out primary active transport, couple directly with ATP to drive their action. In secondary transport, energy from primary transport can be used to move another substance into the cell and up its concentration gradient.

Endocytosis methods require the direct use of ATP to fuel the transport of large particles such as macromolecules; parts of cells or whole cells can be engulfed by other cells in a process called phagocytosis. In phagocytosis, a portion of the membrane invaginates and flows around the particle, eventually pinching off and leaving the particle wholly enclosed by an envelope of plasma membrane. Vacuoles are broken down by the cell, with the particles used as food or dispatched in some other way. Pinocytosis is a similar process on a smaller scale. The cell expels waste and other particles through the reverse process, exocytosis. Wastes are moved outside the cell, pushing a membranous vesicle to the plasma membrane, allowing the vesicle to fuse with the membrane and incorporating itself into the membrane structure, releasing its contents to the exterior of the cell.

1. Where does the cell get energy for active transport processes?

1. The cell harvests energy from ATP produced by its own metabolism to power active transport processes, such as pumps.

active transport:  the method of transporting material that requires energy

endocytosis:  a type of active transport that moves substances, including fluids and particles, into a cell
exocytosis:  a process of passing material out of a cell
phagocytosis: a process that takes macromolecules that the cell needs from the extracellular fluid; a variation of endocytosis

pinocytosis:  a process that takes solutes that the cell needs from the extracellular fluid; a variation of endocytosis

receptor-mediated endocytosis:  a variant of endocytosis that involves the use of specific binding proteins in the plasma membrane for specific molecules or particles