Cells fall into one of two broad categories: prokaryotic and eukaryotic. The predominantly single-celled organisms of the domains Bacteria and Archaea are classified as prokaryotes (pro– = before; –karyon– = nucleus). Animal cells, plant cells, fungi, and protists are eukaryotes (eu– = true).

All cells share four common components: 1) a plasma membrane, an outer covering that separates the cell’s interior from its surrounding environment; 2) cytoplasm, consisting of a jelly-like region within the cell in which other cellular components are found; 3) DNA, the genetic material of the cell; and 4) ribosomes, particles that synthesize proteins. However, prokaryotes differ from eukaryotic cells in several ways. 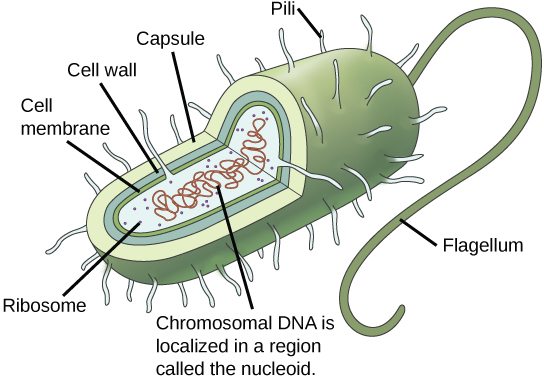 Unlike Archaea and eukaryotes, bacteria have a cell wall made of peptidoglycan, comprised of sugars and amino acids, and many have a polysaccharide capsule (Figure 1). The cell wall acts as an extra layer of protection, helps the cell maintain its shape, and prevents dehydration. The capsule enables the cell to attach to surfaces in its environment. Some prokaryotes have flagella, pili, or fimbriae. Flagella are used for locomotion. Pili are used to exchange genetic material during a type of reproduction called conjugation. Fimbriae are protein appendages used by bacteria to attach to other cells.

In nature, the relationship between form and function is apparent at all levels, including the level of the cell, and this will become clear as we explore eukaryotic cells. The principle “form follows function” is found in many contexts. For example, birds and fish have streamlined bodies that allow them to move quickly through the medium in which they live, be it air or water. It means that, in general, one can deduce the function of a structure by looking at its form, because the two are matched.

At 0.1–5.0 µm in diameter, prokaryotic cells are significantly smaller than eukaryotic cells, which have diameters ranging from 10–100 µm (Figure 2). The small size of prokaryotes allows ions and organic molecules that enter them to quickly spread to other parts of the cell. Similarly, any wastes produced within a prokaryotic cell can quickly move out. However, larger eukaryotic cells have evolved different structural adaptations to enhance cellular transport. Indeed, the large size of these cells would not be possible without these adaptations. In general, cell size is limited because volume increases much more quickly than does cell surface area. As a cell becomes larger, it becomes more and more difficult for the cell to acquire sufficient materials to support the processes inside the cell, because the relative size of the surface area through which materials must be transported declines. 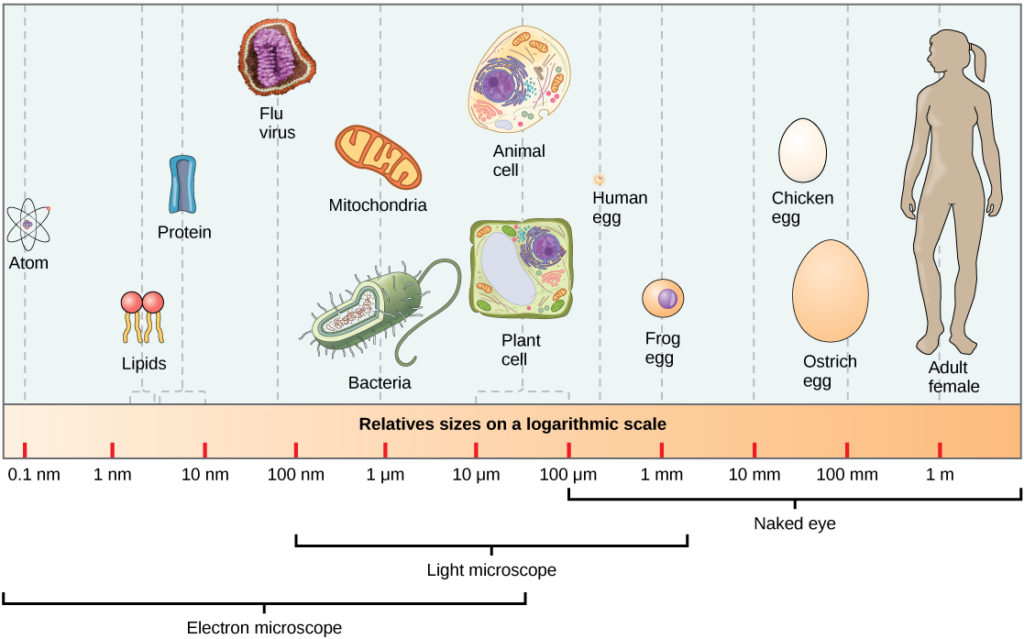 Prokaryotes are predominantly single-celled organisms of the domains Bacteria and Archaea. All prokaryotes have plasma membranes, cytoplasm, ribosomes, a cell wall, DNA, and lack membrane-bound organelles. Many also have polysaccharide capsules. Prokaryotic cells range in diameter from 0.1–5.0 µm.

1. Describe the structures that are characteristic of a prokaryote cell.

1. Prokaryotic cells are surrounded by a plasma membrane and have DNA, cytoplasm, and ribosomes, like eukaryotic cells. They also have cell walls and may have a cell capsule. Prokaryotes have a single large chromosome that is not surrounded by a nuclear membrane. Prokaryotes may have flagella or motility, pili for conjugation, and fimbriae for adhesion to surfaces.
Licenses and Attributions
CC licensed content, Shared previously