Quadratic relationships between variables are commonly found in physical sciences, engineering, and elsewhere.

Use the quadratic equation to model phenomena studied in science

The Pythagorean Theorem is used to relate the three sides of right triangles. It states:

This says that the square of the length of the hypotenuse ([latex]c[/latex]) is equal to the sum of the squares of the two legs ([latex]a[/latex] and [latex]b[/latex]) of the triangle. This has been proven in many ways, among the most famous of which was devised by Euclid.

In practice, the Pythagorean Theorem is often solved via factoring or completing the square.  If any of the variables [latex]a[/latex], [latex]b[/latex], or [latex]c[/latex] represent functions in themselves, it is often useful to expand the terms, combine like variables, and then re-factor the expression.

Most all equations involving gravity include a second-order relationship.

Consider the equation relating gravitational force ([latex]F[/latex]) between two objects to the masses of each object ([latex]m_1[/latex] and [latex]m_2[/latex]) and the distance between them ([latex]r[/latex]):

The shape of this function is not a parabola, but becomes such a shape if rearranged to solve for [latex]m_1[/latex] or [latex]m_2[/latex], as seen below:

The general form of this function is:

which you should recognize as the vertex form of a quadratic equation.

The maximum height of a projectile launched directly upwards can also be calculated from a quadratic relationship. The formula relates height ([latex]h[/latex]) to initial velocity ([latex]v_0[/latex]) and gravitational acceleration ([latex]g[/latex]):

The same maximum height of a projectile launched directly upwards can be found using the time at the projectile’s peak ([latex]t_h[/latex]):

Substituting any time ([latex]t[/latex]) in place of [latex]t_h[/latex] leaves the equation for height as a quadratic function of time.

The equation relating electrostatic force ([latex]F[/latex]) between two particles, the particles’ respective charges ([latex]q_1[/latex] and [latex]q_2[/latex]), and the distance between them ([latex]r[/latex]) is very similar to the aforementioned formula for gravitational force:

This is known as Coulomb’s Law. Solving for either charge results in a quadratic equation where the charge is dependent on [latex]r^2[/latex].

For problems involving quadratics in finance, it is useful to graph the equation. From these, one can easily find critical values of the function by inspection.

The method of graphing a function to determine general properties can be used to solve financial problems.Given the algebraic equation for a quadratic function, one can calculate any point on the function, including critical values like minimum/ maximum and x- and y-intercepts.

These calculations can be more tedious than is necessary, however. A graph contains all the above critical points and more, and acts as a clear and concise representation of a function. If one needs to determine several values on a quadratic function, glancing at a graph is quicker than calculating several points. 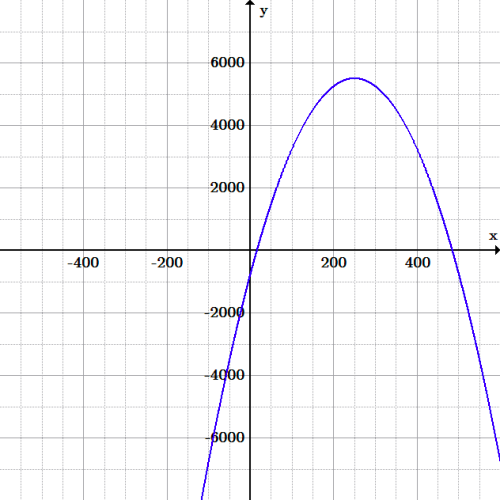