A polynomial is an expression containing constants and variables connected only through basic operations of algebra.

Describe what polynomials are and their defining characteristics

Polynomials are widely used algebraic objects. They have the form of a sum of scaled powers of a variable.

The exponent [latex]n[/latex] is called the degree of [latex]M(x).[/latex] The constant [latex]c[/latex] is the coefficient.

It is also the sum of the 6 monomials: [latex]1/3 x^{100}, -1/3 x^{100}, 4x^{13}, 3x^2, -\pi x[/latex] and [latex]1[/latex], as will be explained in the discussion about addition and subtraction of polynomials. However, we can only write down [latex]P(x)[/latex] as the sum of monomials of distinct degree in exactly one way, namely the first we mentioned. These monomials are called the terms of [latex]P(x).[/latex]The coefficients of [latex]P(x)[/latex] are the coefficients corresponding to its terms.

Every monomial is also a polynomial, as it can be written as a sum with one term, itself.

A special example of a polynomial is the zero polynomial

which is a sum of [latex]0[/latex] monomials.

The degree of the zero polynomial is defined to be [latex]-\infty[/latex].

You may be asked to add or subtract polynomials that have terms of different degrees. For example, one polynomial may have the term [latex]x^2[/latex], while the other polynomial has no like term. If any term does not have a like term in the other polynomial, it does not need to be combined with any other term. It is simply carried down, with addition or subtraction applied appropriately. See the second example below for a demonstration of this concept.

Notice that the answer is a polynomial of degree 3; this is also the highest degree of a polynomial in the problem.

for all real numbers [latex]a,b[/latex] and [latex]c.[/latex] The associative property says that

As we will treat variables in the same way as real numbers, the same properties hold whenever [latex]a,b[/latex] and/or [latex]c[/latex] is a variable. So for the multiplication of a monomial with a polynomial we get the following procedure:

Multiply every term of the polynomial by the monomial and then add the resulting products together.

This method is commonly called the FOIL method, where we multiply the First, Outside, Inside, and Last pairs in the expression, and then add the products of like terms together.

For example, to find the product of [latex](2x+3)(x−4)[/latex], use FOIL and then add the products together:

Zeros of a Product of Polynomials

for all real numbers [latex]x_0.[/latex]

Polynomial and Rational Functions as Models

Functions are commonly used in fitting data to a trend line. Polynomial and rational functions are both relatively accurate and easy to use.

For a set of data containing two (or more) quantitative properties, statisticians use functions to denote a relationship between two or more distinct properties. When we find a function that lies reasonably close to the collected data points, we create a trend line which says how one property behaves as a function of the other ones. We call this curve fitting. Then we can use this to make predictions about the former property once we know something about the others.

Polynomial and rational functions are easy to work with because you only need to make use of elementary operations.

Recall that a polynomial function has the following form:

This need not be a problem. For lots of datasets, their are no asymptotes and data is more or less bounded. (For example, there are no humans who are [latex]-10[/latex] or [latex]10000[/latex] years old.)

Polynomials have also lots of advantages:

To deal with the asymptotic problems of polynomials, we also use rational functions:

A rational function is the ratio of two polynomial functions and has the following form:

Here, n and m define the degrees of the numerator and denominator, respectively, and together, they define the degree of the polynomial. For example, if [latex]n=2[/latex] and [latex]m=1[/latex], the function is described as a quadratic/linear rational function.

Rational functions are a little more complex in form than polynomial functions, but they have an advantage in that they can take on a much greater range of shapes and can effectively model asymptotes. They are also more accurate than polynomial functions both inside and outside the limits of collected data. However, rational functions sometimes include undesirable asymptotes that can disrupt an otherwise smooth trend line. They are also a little bit more difficult to compute, since you also need division to compute them. However, they still run fast. 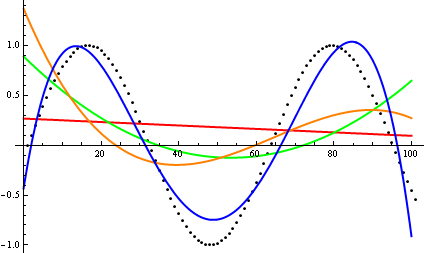 Curve fitting: Polynomial curves generated to fit points (black dots) of a sine function: The red line is a first degree polynomial; the green is a second degree; the orange is a third degree; and the blue is a fourth degree.