Absorption in the Small Intestine

The absorption of nutrients occurs partially by diffusion through the wall of the small intestine.

Examples of nutrients absorbed by the small intestine include carbohydrates, lipids, proteins, iron, vitamins, and water.

Intestinal villus: An image of a simplified structure of the villus.  The thin surface layer appear above the capillaries that are connected to a blood vessel. The lacteal is surrounded by the capillaries.

Digested nutrients pass into the blood vessels in the wall of the intestine through a process of diffusion. The inner wall, or mucosa, of the small intestine is lined with simple columnar epithelial tissue.

Structurally, the mucosa is covered in wrinkles or folds called plicae circulares—these are permanent features in the wall of the organ. They are distinct from the rugae, which are non-permanent features that allow for distention and contraction.

Each villus has a network of capillaries and fine lymphatic vessels called lacteals close to its surface. The epithelial cells of the villi transport nutrients from the lumen of the intestine into these capillaries ( amino acids and carbohydrates) and lacteals (lipids).

The absorbed substances are transported via the blood vessels to different organs of the body where they are used to build complex substances, such as the proteins required by our body. The food that remains undigested and unabsorbed passes into the large intestine.

Absorption of the majority of nutrients takes place in the jejunum, with the following notable exceptions: 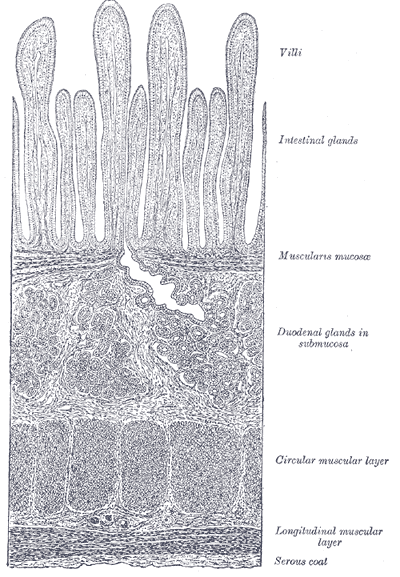 Glucose, amino acids, fats, and vitamins are absorbed in the small intestine via the action of hormones and electrolytes.

Describe the process of absorption of nutrients in the small intestine

During breastfeeding, the lactase enzyme breaks down lactose (milk sugar). However, lactase production ceases after weaning in most populations, so adults in those populations experience gastric discomfort or distress when eating dairy products.

Digestive Enzymes and the Small Intestine

The three major classes of nutrients that undergo digestion are:

Lactase is absent in most adult humans and so lactose, like most polysaccharides, is not digested in their small intestine. Some carbohydrates, such as cellulose, are not digested at all despite being made of multiple glucose units. This is because the cellulose is made out of beta-glucose that makes the inter-monosaccharidal bindings different from the ones present in starch, which consists of alpha-glucose. Humans lack the enzyme for splitting the beta-glucose-bonds, something reserved for herbivores and the bacteria from the large intestine.

The fat-soluble vitamins A, D, and E are absorbed in the upper small intestine. The factors that cause the malabsorption of fat can also affect the absorption of these vitamins. Vitamin B12 is absorbed in the ilium and must be bound to intrinsic factor, a protein secreted in the stomach, in order to be absorbed. If intrinsic factor is missing, then Vitamin B12 is not absorbed and pernicious anemia results.

Of the water-soluble vitamins, the transport of folate and B12 across the apical membrane are independent from sodium (Na+), but the other water-soluble vitamins are absorbed by Na+ co-transporters. In physiology, the primary ions of electrolytes are sodium (Na+), potassium (K+), calcium (Ca2+), magnesium (Mg2+), chloride (Cl−), hydrogen phosphate (HPO42−), and hydrogen carbonate (HCO3−).

Serious electrolyte disturbances, such as dehydration and over-hydration, may lead to cardiac and neurological complications that, unless they are rapidly resolved, will result in a medical emergency. Water and minerals are reabsorbed back into the blood in the colon (large intestine) where the pH is slightly acidic—about 5.6 to 6.9.