Sweat glands, also known as sudoriferous glands, are distributed over most of the body surface.

Sweat glands, also called sudoriferous glands, are simple tubular glands found almost everywhere on our body. Each sweat gland is made up of two portions:

The secretory portion of a sweat gland is a twisted and coiled tube that has an opening at its very top. It is in the coiled secretory portion of the sweat gland where the sweat is actually produced. The excretory duct moves from the secretion portion, through the dermis, and into the topmost layer of the skin, the epidermis, where it opens up at the surface of our skin.

The most numerous types of sweat glands in our skin, found almost everywhere on the body, are called eccrine glands. These are the true sweat glands in the sense of helping to regulate body temperature.  In other words, sweating causes the loss of body heat and thus cools us down on a hot day or when performing strenuous exercise. This is because as the water in sweat evaporates, it takes body heat with it.

The other kind of sweat glands are known as apocrine glands. The apocrine glands are found in places like the armpits, scrotum, anus, and labia majora. They are typically larger than eccrine glands and their ducts tend to open into hair follicles instead of hairless areas of skin.

These glands, unlike the eccrine glands, serve virtually no role in the regulation of body temperature. These are also the glands largely responsible for body smells, as their excretions are converted by skin bacteria into various chemicals we associated with body odor.

Unlike eccrine glands, the exact function of apocrine glands is unknown and debated. We do know they are activated during times of stress, pain, and sexual foreplay but for what reasons is yet to be made clear.

Sebaceous glands are found in most of the skin (except the palms of the hands and the soles of the feet).

Describe the location and function of sebaeous glands

Sebaceous glands are the oil secreting glands of your body. This is why they are also called the oil glands. They are a type of holocrine simple saccular (alveolar) gland. Their function is to secrete a substance called sebum, a mixture of fatty substances, entire sebum-producing cells, and epithelial cell debris. The sebaceous glands are located in the dermis, the middle layer of the skin, and they develop from the epithelial cells of the hair follicle itself (the external root sheath of the hair follicle).

While the sebaceous glands are present just about all over the skin, they are notably absent on the palms of the hands and the soles of the feet. The sebum being excreted by your body today began production around 8 days ago.

The Function of Sebum 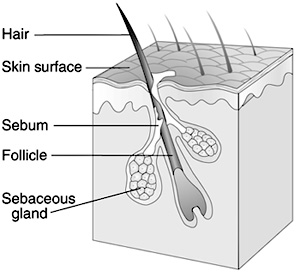 The sebum produced by these glands plays numerous important roles:

Sebaceous glands are involved in numerous conditions. During puberty, various hormones cause them to produce a lot of sebum and this therefore contributes to oily skin. If a duct of a sebaceous gland is clogged with sebum, a whitehead results. If this material is allowed to dry and oxidize, it will become darker, forming a blackhead. If a sebaceous gland becomes infected, moderate and severe forms of acne are the result.

The glands lining the ear canal that produce earwax (cerumen) are called ceruminous glands. They are modified sebaceous glands.

Fingernails are made of keratin and they perform two major functions: protection and sensation.

Describe the structure of fingernails

Function of the Fingernail

The fingernail is an important structure made of keratin. The fingernail generally serves two purposes: it acts as a protective plate and enhances sensation of the fingertip. Nails can also help grasp small things.

The protection function of the fingernail is commonly known, but the sensation function is equally important. The fingertip has many nerve endings in it that allow it to receive volumes of information about the objects we touch. The nail acts as a counterforce to the fingertip, providing even more sensory input when an object is touched.

Nails grow from the nail bed continuously but they slow down their growth rate with age, poor nutrition, or poor circulation.

Anatomy of the Fingernail

The structure of the fingernail is divided into six specific parts:

The nail sinus (sinus unguis) is where the nail root is—at the base of the nail underneath the skin. It originates from the actively growing tissue below, the matrix. The root of the fingernail is also known as the germinal matrix.

The nail bed is a part of the nail matrix called the sterile matrix. It extends from the edge of the germinal matrix, or lunula, to the hyponychium. The nail bed contains the blood vessels, nerves, and melanocytes, or melanin-producing cells. As the nail is produced by the root, it streams down along the nail bed, which adds material to the undersurface of the nail and makes it thicker.

The eponychium, or cuticle, is situated between the skin of the finger; the nail plate fuses these structures together and provides a waterproof barrier.

The perioncyhium is the skin that overlies the nail plate on its sides; it is also known as the paronychial edge. The perionychium is the site of hangnails, ingrown nails, and an infection of the skin called paronychia.

Describe the characteristics of body hair

Hair is present on almost the entire surface of our body, excluding certain regions such as the palms of our hands, soles of our feet, and some genital areas. In certain places, hair is so small that it is virtually invisible to the naked eye and in other places it is quite obvious, like on our head and in our armpits.

A hair can be divided into two main parts lengthwise:

Each hair can also be broken into three main parts. They are, from the most superficial to the deepest:

There are three types of hairs:

In the deepest portion of the each hair follicle lies the hair bulb. It is supplied with nutrients via blood by a structure called the hair papilla. The hair bulb has a growth zone called the matrix. Here, stratum basale epithelial cells divide via mitosis to form the hair.

As new cells form, they push older cells up to the surface. These older cells die and become keratinized in the process. This means that most hair is made up of protein (keratin).

The hair bulb also contains cells called melanocytes that produce various kinds of melanin pigments. Their varying combinations are what help to produce the different natural hair colors people have.

Depending on the kind of hair and location, hair can have one of several purposes:

Skin overview: Skin layers, of both hairy and hairless skin.