Describe circulation of blood in the heart

Atherosclerotic plaques in a coronary artery will slowly occlude (block) the vessel. As the vessel diameter narrows, less blood and oxygen will pass through and a region of the myocardium will consequently not receive an adequate supply of oxygen. This could result in angina and ultimately a myocardial infarction.

Coronary arteries run both along the surface of the heart and deep within the myocardium, which has the greatest metabolic demands of all the heart tissues due to its muscle content. Epicardial coronary arteries, which run along on the surface of the heart, are capable of autoregulating vasodilation and vasoconstriction to maintain coronary blood flow at appropriate levels to fit the metabolic demands of the heart muscle. These vessels are relatively narrow and thus vulnerable to blockage, which may cause a myocardial infarction. Subendocardial coronary arteries run deep within the myocardium to provide oxygen throughout the muscle tissue of the cardiac wall.

In diastole, the ventricular myocardium contracts, lowering the intraventricular pressure and allowing the subendocardial vessels to become open again. Due to the high pressures generated in the ventricular myocardium during systole, most myocardial tissue perfusion occurs during diastole. Additionally, catecholamines such as norephinephrine, which normally cause vasoconstriction will instead cause vasodilation within the coronary arteries. This mechanism is due to beta-adrenergic receptors in the coronary arteries and helps enable the increased cardiac output associated with fight-or-flight responses.

A myocardial infarction (heart attack) may be caused by prolonged ischemia (oxygen deprivation) in the heart, which occurs due to blockage of any of the coronary arteries. Since there is very little unnecessary blood supply to the myocardium, blockage of these vessels can cause serious damage. When these vessels become blocked, the myocardium becomes oxygen-deprived, a condition called ischemia. Brief periods of ischemia in the heart are associated with intense chest pain called angina, which may either be transient if the clot breaks up on its own or stable if it does not. As the time period of ischemia increases, the hypoxic conditions cause muscle tissue to die, causing a myocardial infarction (heart attack).

Myocardial infarction is one of the most common causes of death worldwide. The clots that cause the infarction are usually the result of ruptured atherosclerotic plaques that break off and occlude the coronary arteries, but arterial thrombosis from injury or pooled blood may also cause a heart attack. The tissues of the heart do not regenerate, so those that survive a myocardial infarction will generally have scar tissue in their myocardium and may be more susceptible to other heart problems in the future.

Describe the operation of the atrioventricular valves: bicuspid (mitral) and tricuspid

A heart valve allows blood flow in only one direction through the heart, and the combination of the atrioventricular and semi-lunar heart valves determines the pathway of blood flow. Valves open or close based on pressure differences across the valve. The atrioventricular (AV) valves separate the atria from the ventricles on each side of the heart and prevent backflow of blood from the ventricles into the atria during systole. 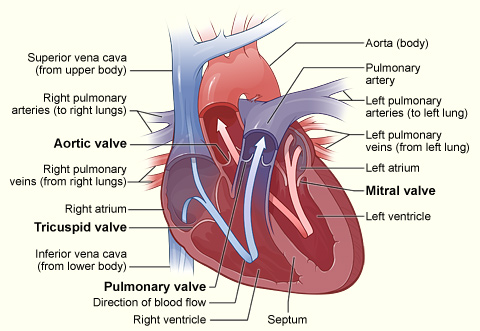 Cross section of heart indicating heart valves: The four valves determine the pathway of blood flow (indicated by arrows) through the heart

The subvalvular apparatus describes the structures beneath the AV valves that prevent the valves prom prolapsing. Valve prolapse means that the valves do not close properly, which may cause regurgitation or backflow of blood from the ventricle back into the atria, which is inefficient. The subvalvular apparatus includes the chordae tendineae and the papillary muscles. The AV valves are anchored to the wall of the ventricle by chordae tendineae (heartstrings), small tendons that prevent backflow by stopping the valve leaflets from inverting. The chordae tendineae are inelastic and attached at one end to the papillary muscles and at the other end to the valve cusps.

Papillary muscles are finger-like projections from the wall of the ventricle that anchor the chordae tendineae. This connection provides tension to hold the valves in place and prevent them from prolapsing into the atria when they close, preventing the risk of regurgitation. The subvalvular apparatus has no effect on the opening and closing of the valves, which is caused entirely by the pressure gradient of blood across the valve as blood flows from high pressure to low pressure areas.

The mitral valve is on the left side of the heart and allows the blood to flow from the left atrium into the left ventricle. It is also known as the bicuspid valve because it contains two leaflets (cusps). The relaxation of the ventricular myocardium and the contraction of the atrial myocardium cause a pressure gradient that allows for rapid blood flow from the left atrium into the left ventricle across the mitral valve. Atrial systole (contraction) increases the pressure in the atria, while ventricular diastole (relaxation) decreases the pressure in the ventricle, causing pressure-induced flow of blood across the valve. The mitral annulus, a ring around the mitral valve, changes in shape and size during the cardiac cycle to prevent backflow. The ring contracts at the end of atrial systole due to the contraction of the left atrium around it, which aids in bringing the leaflets together to provide firm closure during ventricular systole.

The reason that the valves have different numbers of leaflets is not fully understood, but may arise from differences in tissue structure and pressure that occur during fetal development.

The semilunar valves allow blood to be pumped into the major arteries while preventing backflow of blood from the arteries into the ventricles.

Describe the operation of the semilunar valves

The semilunar valves are located at the connections between the pulmonary artery and the right ventricle, and the aorta and the left ventricle. These valves allow blood to be pumped forward into the arteries, but prevent backflow of blood from the arteries into the ventricles. These valves do not have subvalvular apparatus and are more similar to the semilunar valves in veins and lymphatic vessels than to atrioventricular (AV) valves. 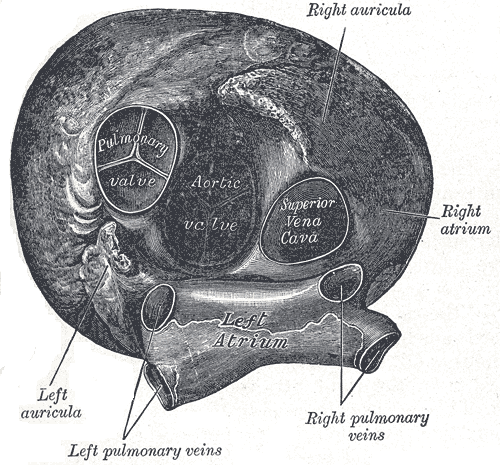 Heart viewed from above: This anterior view of the heart indicates the semilunar valves, and the aortic and pulmonary valves.

Valves are vulnerable to several conditions that impair their normal functions. Two of the most common problems with the semilunar valves are stenosis and regurgitation.  Valve stenosis refers to narrowing of the valves, which prevents the valve from opening fully, causing an obstruction of blood flow. Valve stenosis is often caused by calcium buildup and scarring from rheumatic fever, and may cause cardiac hypertrophy and heart failure. Valve regurgitation is backflow through the valves that occurs when when they cannot close completely. It is the cause of most heart murmurs, and is generally a minor problem, but if severe enough, it can cause heart failure. Stenosis and regurgitation can occur in both the semilunar and atrioventricular valves.

Distinguish between the systemic and pulmonary circulation circuits

At the lungs, the blood travels through capillary beds on the alveoli where gas exchange occurs, removing carbon dioxide and adding oxygen to the blood. Gas exchange occurs due to gas partial pressure gradients across the the alveoli of the lungs and the capillaries interwoven in the alveoli. The oxygenated blood then leaves the lungs through pulmonary veins, which returns it to the left atrium, completing the pulmonary circuit. As the pulmonary circuit ends, the systemic circuit begins.

Alveoli: A diagram of the alveoli, showing the capillary beds where gas exchange with the blood occurs.

Systemic circulation is the movement of blood from the heart through the body to provide oxygen and nutrients to the tissues of the body while bringing deoxygenated blood back to the heart. Oxygenated blood enters the left atrium from the pulmonary veins. The blood is then pumped through the mitral valve into the left ventricle. From the left ventricle, blood is pumped through the aortic valve and into the aorta, the body’s largest artery. The aorta arches and branches into major arteries to the upper body before passing through the diaphragm, where it branches further into the illiac, renal, and suprarenal arteries which supply the lower parts of the body.

The arteries branch into smaller arteries, arterioles, and finally capillaries. Gas and nutrient exchange with the tissues occurs within the capillaries that run through the tissues. Metabolic waste and carbon dioxide diffuse out of the cell into the blood, while oxygen and glucose in the blood diffuses out of the blood and into the cell. Systemic circulation keeps the metabolism of every organ and every tissue in the body alive, with the exception of the parenchyma of the lungs, which are supplied by pulmonary circulation.