Overview of the Nervous System

Identify the types of clusters of neuronal cell bodies

In neuroanatomy, a nucleus is a brain structure consisting of a relatively compact cluster of neurons. It is one of the two most common forms of nerve cell organization along with layered structures such as the cerebral cortex or cerebellar cortex. In anatomical sections, a nucleus shows up as a region of gray matter often bordered by white matter. The vertebrate brain contains hundreds of distinguishable nuclei varying widely in shape and size. A nucleus may itself have a complex internal structure, with multiple types of neurons arranged in clumps (subnuclei) or layers.

In addition, the term nucleus can refer to a distinct group of neurons that spread over an extended area. For example, the reticular nucleus of the thalamus is a thin layer of inhibitory neurons that surround the thalamus.

Innervation of the Autonomic Nervous System: Satellite glial cells are expressed throughout the sympathetic and parasympathetic ganglia in their respective nervous system divisions.

Satellite glial cells line the exterior surface of neurons in the PNS. Satellite glial cells (SGCs) also surround neuron cell bodies within ganglia. They are of a similar embryological origin to Schwann cells of the PNS, as both are derived from the neural crest of the embryo during development. SGCs have a variety of roles, including control over the microenvironment of sympathetic ganglia. They are thought to have a similar role to astrocytes in the central nervous system (CNS). They supply nutrients to the surrounding neurons and also have some structural function. Satellite cells also act as protective, cushioning cells. Additionally, they express a variety of receptors that allow for a range of interactions with neuroactive chemicals.

Describe bundles of axons in the central and peripheral nervous systems

Each nerve is covered externally by a dense sheath of connective tissue, the epineurium. Underlying this layer of flat cells, the perineurium, forms a complete sleeve around a bundle of axons called fascicles. Surrounding each axon is the endoneurium. The endoneurium consists of an inner sleeve of material called the glycocalyx and an outer delicate meshwork of collagen fibers. Within the endoneurium, the individual nerve axons are surrounded by a protein liquid called endoneurial fluid. The endoneurium has properties analogous to the blood-brain barrier, in that it prevents certain molecules from crossing from the blood into the endoneurial fluid.

Axon length and diameter can vary greatly from between 1 m to 1 mm in length and 1 µm to 20 µm in diameter.  The longest axons in the human body are those of the sciatic nerve, which run from the base of the spinal cord to the big toe of each foot. Axons in the central nervous system typically show complex trees with many branch points allowing for the simultaneous transmission of messages to a large number of target neurons.

Axons are described as either un-myelinated or myelinated. Myelin is a layer of a fatty insulating substance, which is formed by two types of glial cells: Schwann cells en-sheathing peripheral neurons and oligodendrocytes insulating those of the central nervous system. Myelination enables an especially rapid mode of electrical impulse propagation called saltatory conduction. De-myelination of axons causes the multitude of neurological symptoms found in the disease multiple sclerosis.

The central nervous system consists of a central cavity surrounded by gray matter made of neuronal cell bodies and white matter made of myelinated axons.

The central nervous system (CNS) is comprised of white and gray matter. In the spinal cord and cerebrum gray matter is surrounded by white matter. However, in the cerebellum and cerebral hemispheres this is reversed with the grey matter surrounding underlying white matter.

Gray matter is a major component of the CNS, it refers to un-myelinated neurons and other cells of the central nervous system such as glial cells and dendrites. It is present in the brain, brainstem and cerebellum, and present throughout the spinal cord.

Gray matter contains most of the brain’s neuronal cell bodies. The grey matter includes regions of the brain involved in muscle control, and sensory perception such as seeing and hearing, memory, emotions, speech, decision making, and self-control. 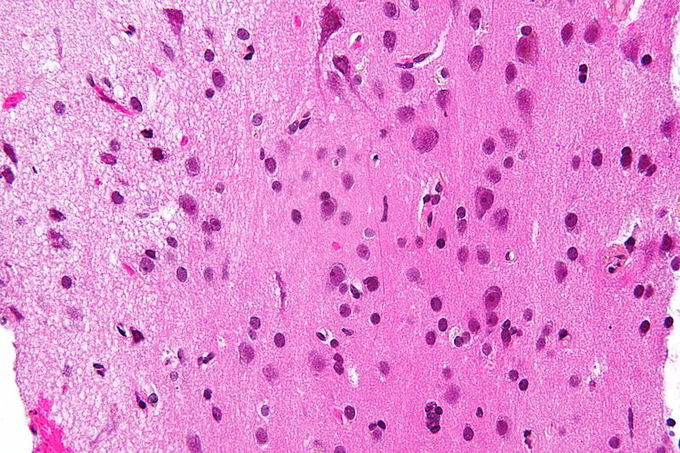 A second major component of the CNS is white matter. It is composed mainly of bundles of myelinated axons, with very few neuronal bodies. White matter connects the various grey matter regions of the nervous system to each other and carries nerve impulses between neurons.

Myelin, the lipid that forms a thin layer, known as the myelin sheath, around the axons providing electrical insulation is white in color, giving rise to the name white matter.

White Matter on an MRI: This MRI highlights the location of white matter in the brain.