Development of the Immune System

Development of the Immune System

Early in life, the immune system is not mature enough to fight off pathogens and must depend on antibodies from the mother.

Describe the development of the immune system

The body’s capability to react to antigens depends on a person’s age, type of antigen, maternal factors, and the area of the body affected.

Neonates are physiologically immunodeficient, meaning both their innate and adaptive immunological responses are greatly suppressed. Once born, a child’s immune system responds favorably to protein antigens and less so to glycoproteins and polysaccharides. In fact, many of the infections acquired by neonates are caused by low-virulence organisms like staphylococcus and pseudomonas.

In neonates, opsonic activity and the ability to activate the complement cascade is very limited. For example, the mean level of C3 in a newborn is approximately 65% of that found in the adult. Phagocytic activity is also greatly impaired in newborns. This is due to lower opsonic activity, as well as diminished upregulation of integrin and selectin receptors, which limit the ability of neutrophils to interact with adhesion molecules in the endothelium. It’s also limited by slow monocytes with reduced ATP production.

Although the number of total lymphocytes in newborns is significantly higher than in adults, the cellular and humoral immunity is impaired. Antigen-presenting cells in newborns have a reduced capability to activate T cells, proliferate poorly, and produce very small amounts of cytokines like IL-2, IL-4, IL-5, IL-12, and IFN-g. This limits the capacity of these cells to activate the humoral response and the phagocitic activity of macrophages. B cells develop early in gestation but are not fully active.

The Role of Maternal Factors

Maternal factors also play a role in the body’s immune response. At birth, most of the immunoglobulin is present is maternal IgG. Because IgM, IgD, IgE and IgA don’t cross the placenta, they are almost undetectable at birth, although some IgA is provided in breast milk. These passively acquired antibodies can protect the newborn for up to 18 months, but their response is usually short-lived and of low affinity. In addition, a child is exposed to the antibody for a particular antigen before being exposed to the antigen itself, the body will produce a dampened response. Passively acquired maternal antibodies can suppress the antibody response to active immunization. Similarly, the response of T-cells to vaccination differs in children compared to adults, and vaccines that induce Th1 responses in adults do not readily elicit these same responses in neonates. By 6 to 9 months after birth, a child’s immune system begins to respond more strongly to glycoproteins. Not until 12 to 24 months of age is there a marked improvement in the body’s response to polysaccharides. This information is used when developing vaccination schedules.

During adolescence the human body undergoes physical, physiological, and immunological changes, triggered and mediated by various hormones. Depending on the sex, testosterone or 17-β-oestradiol act on males and females respectively, starting at around age 12 for boys and 10 for girls. There is evidence that these steroids act directly not only on the primary and secondary sexual characteristics, but also affect the development and regulation of the immune system. Pubescent and post-pubescent females and males are at increased risk for autoimmune disorders. There is some evidence that cell surface receptors on B cells and macrophages may detect sex hormones in the system.

Lymphoid vs. Myeloid Model of Lymphosis

New Mixed Myeloid-Lymphoid Progenitor Tree(RCCH) Grayscale: Side by side comparison of the new and old lineage models. 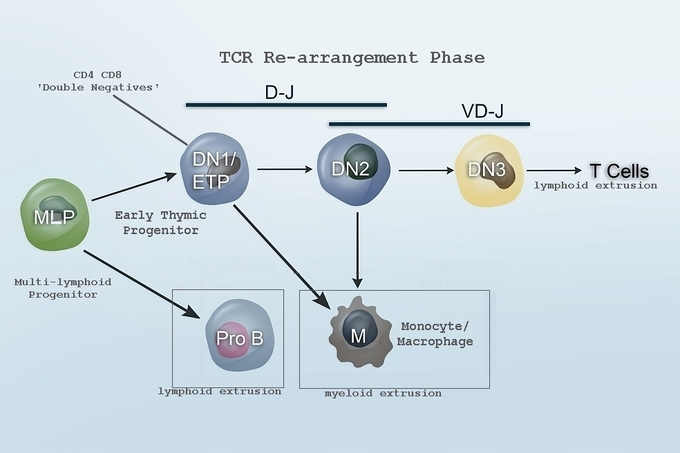 Aging and the Immune System

As aging occurs, the immune system begins to lose its ability to ward off pathogens.

Describe the effects of aging on the immune system

Immunosenescence refers to the gradual deterioration of the immune system brought on by natural age advancement. It involves both the host’s capacity to respond to infections and the development of long-term immune memory, especially by vaccination. This age-associated immune deficiency is found in both long- and short-living species as a function of age relative to life expectancy. It is a major factor in increased morbidity and mortality among the elderly.

Immunosenescence is not a random deteriorative phenomenon; rather, it appears to inversely repeat an evolutionary pattern, with most affected parameters under genetic control. Immunosenescence can also be envisaged as the result of continuous, unavoidable exposure to viruses and bacteria.

Immunosenescence is a multifactorial condition leading to pathologically significant health problems in the aged population. Age-dependent biological changes contribute to the onset of immunosenescence. Hematopoietic stem cells (HSC) provide the regulated lifelong supply of leukocyte progenitors that in turn differentiate into specialized immune cells (including lymphocytes, antigen -presenting dendritic cells and phagocytes). With age, these stem cells diminish in their self-renewal capacity due to the accumulation of oxidative damage to DNA by cellular metabolic activity and shortening of telomeric terminals of chromosomes. There is a notable decline in the total number of phagocytes in older adults, coupled with an intrinsic reduction of their bactericidal activity. The cytotoxicity of natural killer (NK) cells and the antigen-presenting function of dendritic cells also diminish. The age-associated impairment of dendritic antigen-presenting cells (APCs) has profound implications, causing a deficiency in cell-mediated immunity and subsequent inability for effector T-lymphocytes to modulate an adaptive immune response. A decline in humoral immunity is caused by a reduction in the population of antibody producing B-cells along with a smaller immunoglobulin diversity and affinity.

The production of new naive lymphocytes and the functional competence of memory cell populations also declines in older adults, leading to increased frequency and severity of diseases such as cancer, chronic inflammatory disorders, and autoimmunity. Infections in the elderly frequently present with non-specific signs and symptoms, and clues of focal infection are often absent or obscured by underlying chronic conditions. Ultimately, this provides problems in diagnosis and treatment.

In addition to changes in immune response, the beneficial effects of inflammation become detrimental later in life according to the antagonistic pleiotropy theory of aging. It should be noted that changes in the lymphoid compartment are not solely responsible for the malfunctioning of the immune system in the elderly. Although myeloid cell production does not seem to decline with age, macrophages become dysregulated as a consequence of environmental changes.

T-cell Functional Dysregulation as a Biomarker

The functional capacity of T-cells is most influenced by the effects of aging. In fact, age-related alterations are evident in all stages of T-cell development, making them a significant factor in the development of immunosenescence. After birth, the decline of T-cell function begins with the progressive involution of the thymus, the organ essential for T-cell maturation following the migration of precursor cells from the bone marrow. This age-associated decrease of thymic epithelial volume results in a reduction of the number of thymocytes (i.e. pre-mature T-cells), thus reducing output of peripheral naïve T-cells. Once matured and circulating throughout the peripheral system, T-cells still undergo deleterious age-dependent changes. Together with the age-related thymic involution and the consequent age-related decrease of thymic output of new T-cells, this situation leaves the body practically devoid of virgin T-cells, increasing susceptibility to both infectious and non-infectious diseases.

T-cell components associated with immunosenescence include: