Diseases and Disorders of the Reproductive System

A sexually transmitted infection is passed between people during unprotected sexual intercourse with an infected partner. 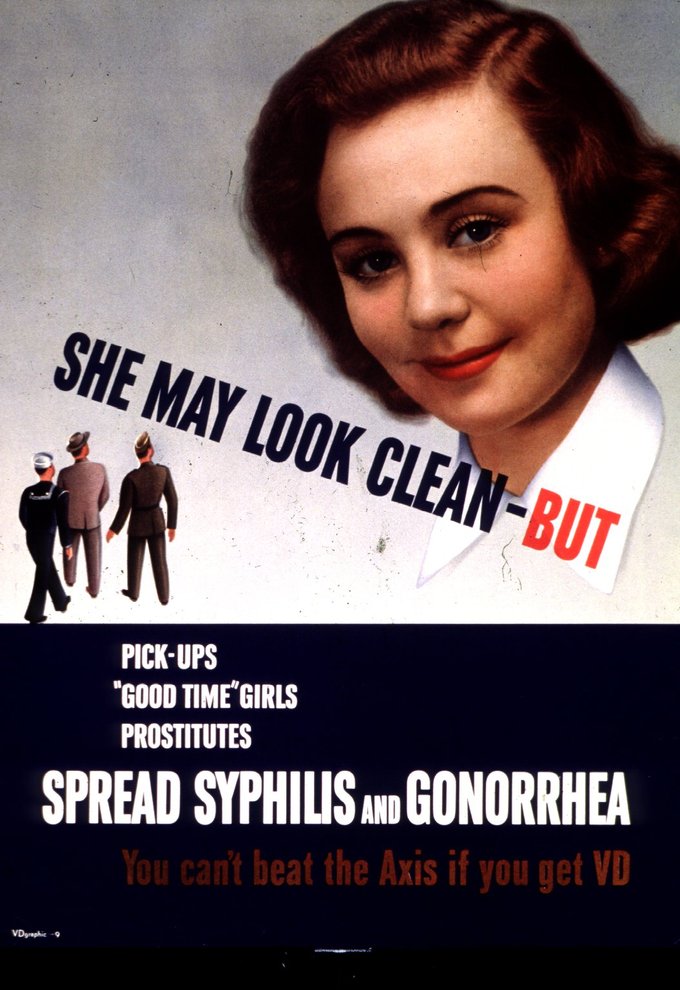 Halting the spread of STDs: U.S. propaganda poster targeted at World War II soldiers and sailors appealed to their patriotism in urging them to protect themselves. The text at the bottom of the poster reads,”You can’t beat the Axis if you get VD.” Images of women were used to catch the eye on many VD posters.

Sexually transmitted infections (STI), also referred to as sexually transmitted diseases (STD) and venereal diseases (VD), are illnesses that have a significant probability of transmission between humans by means of human sexual behavior, including vaginal intercourse, oral sex, and anal sex. While in the past, these illnesses have mostly been referred to as STDs or VD, in recent years the term sexually transmitted infections (STIs) has been preferred, as it has a broader range of meaning; a person may be infected, and may potentially infect others, without having a disease. Some STIs can also be transmitted via the use of IV drug needles after its use by an infected person, as well as through childbirth or breastfeeding. STIs have been well known for hundreds of years.

As may be noted from the name, sexually transmitted infections are transmitted from one person to another by certain sexual activities, rather than being actually caused by those sexual activities. Bacteria, fungi, protozoa or viruses are still the causative agents. It is not possible to catch any STI from a sexual activity with a person who is not carrying a disease; conversely, a person who has an STI contracted it from contact (sexual or otherwise) with someone who had it, or his/her bodily fluids. Some STIs such as HIV can be transmitted from mother to child either during pregnancy or breastfeeding.

Healthcare professionals suggest safer sex, such as the use of condoms, as the most reliable way of decreasing the risk of contracting STIs during sexual activity, but safer sex should by no means be considered an absolute safeguard. The transfer of, and exposure to, bodily fluids, such as blood transfusions and other blood products, shared injection needles, needle-stick injuries (when medical staff are inadvertently jabbed or pricked with needles during medical procedures), shared tattoo needles, and childbirth are other avenues of transmission. These different means put certain groups, such as medical workers, haemophiliacs, and drug users particularly at risk.

Erectile Dysfunction and the Blue Pill

Erectile dysfunction (ED) is the inability to develop or maintain an erection during sexual intercourse.

Describe the causes of and treatments for erectile dysfunction

Erectile dysfunction (ED) is sexual dysfunction characterized by the inability to develop or maintain an erection of the penis during sexual performance. A penile erection is the hydraulic effect of blood entering and being retained in sponge-like bodies within the penis. The process is often initiated as a result of sexual arousal, when signals are transmitted from the brain to nerves in the penis. Erectile dysfunction is indicated when an erection is difficult to produce. There are various circulatory causes, including alteration of the voltage-gated potassium channel, as in arsenic poisoning from drinking water. The most significant organic causes are cardiovascular disease and diabetes, neurological problems (for example, trauma from prostatectomy surgery), hormonal insufficiencies (hypogonadism), and drug side effects. Psychological impotence is where erection or penetration fails due to thoughts or feelings (psychological reasons) rather than physical impossibility; this is somewhat less frequent but can often be helped. Notably, there is a strong response to placebo treatment in psychological impotence. 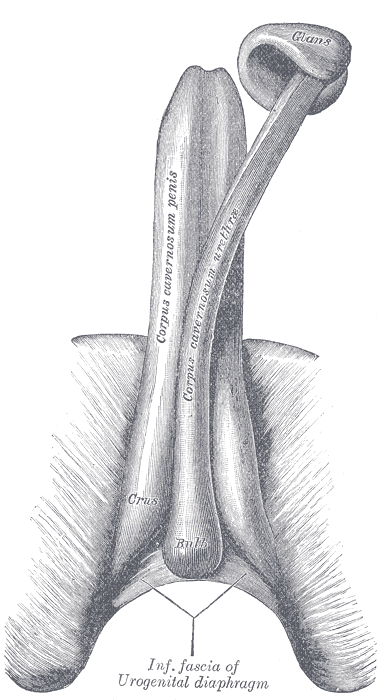 Corpus Cavernosum Urethrae now known as Corpus Spongiosum: The corpus cavernosum penis is one of a pair of sponge-like regions of erectile tissue which contain most of the blood in the penis during penile erection.

Penile erection is managed by two different mechanisms. The first one is the reflex erection, which is achieved by directly touching the penile shaft. The second is the psychogenic erection, which is achieved by erotic or emotional stimuli. The former uses the peripheral nerves and the lower parts of the spinal cord, whereas the latter uses the limbic system of the brain. In both circumstances, an intact neural system is required for a successful and complete erection. Stimulation of penile shaft by the nervous system leads to the secretion of nitric oxide (NO), which causes the relaxation of smooth muscles of corpora cavernosa (the main erectile tissue of penis), and subsequently penile erection. Additionally, adequate levels of testosterone (produced by the testes) and an intact pituitary gland are required for the development of a healthy erectile system. As can be understood from the mechanisms of a normal erection, impotence may develop due to hormonal deficiency, disorders of the neural system, lack of adequate penile blood supply, or psychological problems. Restriction of blood flow can arise from impaired endothelial function due to the usual causes associated with coronary artery disease, but can also be caused by prolonged exposure to bright light.

There are several possible causes of ED, which include the following: drugs, neurogenic disorders (generalized anxiety disorder, personality disorders or traits), psychological problems, negative feelings, aging (making it four times higher in men in their 60s than in men in their 40s), kidney failure, diseases such as diabetes and multiple sclerosis (MS), and lifestyle.

Surgical intervention for a number of different conditions may remove anatomical structures necessary for erection, damage nerves, or impair blood supply. Complete removal of the prostate gland or external beam radiotherapy of the gland are common causes of impotence; both are treatments for prostate cancer. A study in 2002 found that ED can also be associated with bicycling. The number of hours on a bike and/or the pressure on the penis from the saddle of an upright bicycle is directly related to erectile dysfunction A recent study suggests an epidemiological association between chronic periodontitis (periodontal inflammation) and erectile dysfunction, similar to the association between periodontitis and coronary heart diseases, as well as cerebrovascular diseases. In all the three conditions (erectile dysfunction, coronary heart disease, and cerebrovascular diseases), despite the epidemiological association with periodontitis, no causative connection has yet been proven.

Besides treating the major underlying causes such as potassium deficiency or arsenic contamination in drinking water, the primary treatment for erectile dysfunction consists of a trial of PDE5 inhibitor drugs (the first of which is sildenafil or Viagra). In some cases, treatment can involve prostaglandin tablets in the urethra, injections into the penis, a penile prosthesis, a penis pump, or vascular reconstructive surgery. Additional treatments for ED are varied and include a purpose-designed external vacuum pump used to attain erection, with a separate compression ring fitted to the penis to maintain it. These pumps should be distinguished from other penis pumps (supplied without compression rings) which, rather than being used for temporary treatment of impotence, are claimed to increase penis length if used frequently, or vibrate as an aid to masturbation. More drastically, inflatable or rigid penile implants may be fitted surgically. Medications carry risk of priapism.

The cyclic nucleotide phosphodiesterases constitutes a group of enzymes that catalyze the hydrolysis of the cyclic nucleotides cyclic AMP and cyclic GMP. They exist in different molecular forms and are unevenly distributed throughout the body. One of the forms of phosphodiesterase is termed PDE5. The prescription PDE5 inhibitors sildenafil (Viagra), vardenafil (Levitra), and tadalafil (Cialis) are prescription drugs which are taken orally. They work by blocking the action of PDE5, which causes cGMP to degrade.

Cervical cancer is a cancer that originates in the cervix of a female.

List causes and methods of prevention in cervical cancer

Cervical cancer is the term for a malignant neoplasm arising from cells originating in the cervix uteri. One of the most common symptoms of cervical cancer is abnormal vaginal bleeding, but in some cases there may be no obvious symptoms until the cancer has progressed to an advanced stage. Treatment usually consists of surgery (including local excision) in early stages, and chemotherapy and/or radiotherapy in more advanced stages of the disease. 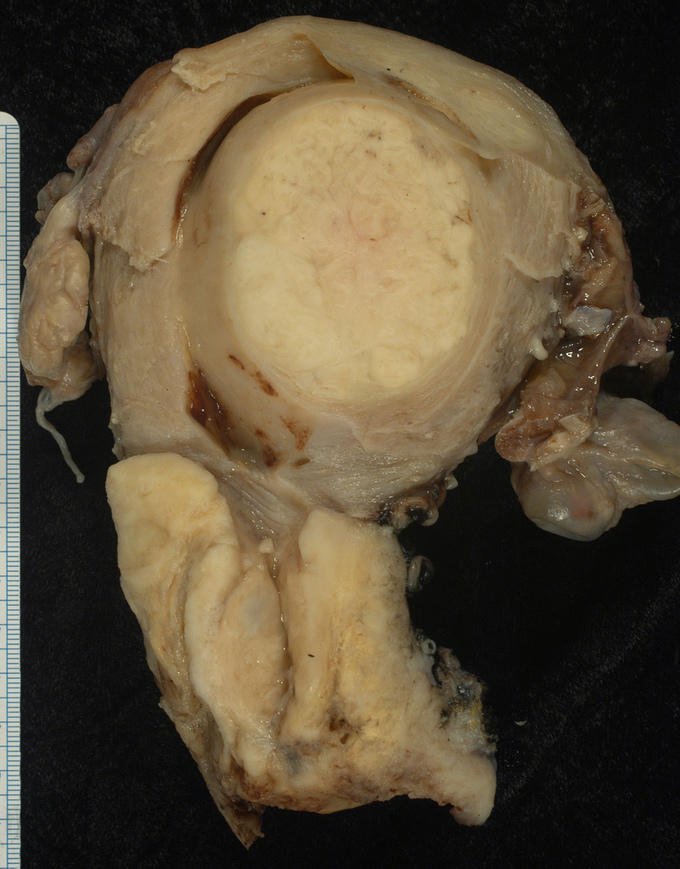 The cervix is the narrow portion of the uterus where it joins with the top of the vagina. Most cervical cancers are squamous cell carcinomas, arising in the squamous (flattened) epithelial cells that line the cervix. Adenocarcinoma, arising in glandular epithelial cells is the second most common type. Very rarely, cancer can arise in other types of cells in the cervix.

The early stages of cervical cancer may be completely asymptomatic. Vaginal bleeding, contact bleeding, or (rarely) a vaginal mass may indicate the presence of malignancy. Also, moderate pain during sexual intercourse and vaginal discharge are symptoms of cervical cancer. In advanced disease, metastases may be present in the abdomen, lungs or elsewhere.

Symptoms of advanced cervical cancer may include: loss of appetite, weight loss, fatigue, pelvic pain, back pain, leg pain, swollen legs, heavy bleeding from the vagina, bone fractures, and/or (rarely) leakage of urine or feces from the vagina (rarely).

Cancer screening using the Pap smear can identify precancerous and potentially precancerous changes in cervical cells and tissue. Treatment of high-grade changes can prevent the development of cancer in many victims. In developed countries, the widespread use of cervical screening programs has reduced the incidence of invasive cervical cancer by 50% or more. While the pap smear is an effective screening test, confirmation of the diagnosis of cervical cancer or pre-cancer requires a biopsy of the cervix.

Human papillomavirus (HPV) infection appears to be a necessary factor in the development of almost all cases (90+%) of cervical cancer. HPV vaccines effective against the two strains of this large family of viruses that currently cause approximately 70% of cases of cervical cancer have been licensed in the U.S., Canada, Australia, and the EU. Since the vaccines only cover some of the cancer causing (“high-risk”) types of HPV, women should seek regular Pap smear screening, even after vaccination.

Infection with some types of human papilloma virus (HPV) is the greatest risk factor for cervical cancer, followed by smoking. Other risk factors include human immunodeficiency virus. Not all of the causes of cervical cancer are known, however, and several other contributing factors have been implicated.