Diseases and Disorders of the Urinary System

Renal failure uremia is a syndrome of renal failure characterized by elevated levels of urea and creatinine in the blood.

Before dialysis or kidney transplants were widely available treatments, patients with kidney failure had progressive uremic poisoning. These days, most patients have some early symptoms of uremia as their kidney function declines, but prompt dialysis treatments or transplantation avoids most symptoms.

Renal failure (also kidney failure or renal insufficiency) is a medical condition in which the kidneys fail to adequately filter waste products from the blood. The two main forms are acute kidney injury, which is often reversible with adequate treatment, and chronic kidney disease, which is often not reversible. In both cases, there is usually an underlying cause.

Renal failure is mainly determined by a decrease in the glomerular filtration rate, which is the rate at which blood is filtered in the glomeruli of the kidney. This is detected by a decrease in or absence of urine production or determination of waste products (creatinine or urea ) in the blood. Depending on the cause, hematuria (blood loss in the urine) and proteinuria (protein loss in the urine) may be noted. 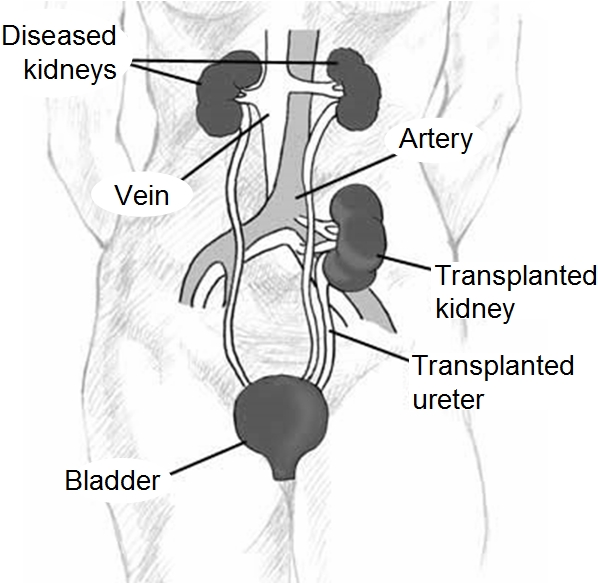 Acute kidney injury (AKI), previously called acute renal failure (ARF), is a rapidly progressive loss of renal function, generally characterized by oliguria (decreased urine production, quantified as less than 400 mL per day in adults, less than 0.5 mL/kg/h in children or less than 1 mL/kg/h in infants); and fluid and electrolyte imbalance. AKI can result from a variety of causes, generally classified as prerenal, intrinsic, and postrenal. An underlying cause must be identified and treated to arrest the progress, and dialysis may be necessary to bridge the time gap required for treating these fundamental causes.

Chronic kidney disease (CKD) can also develop slowly and, initially, show few symptoms. CKD can be the long-term consequence of irreversible acute disease or part of a disease progression.

Acute kidney injuries can be present on top of chronic kidney disease, a condition called acute-on-chronic renal failure (AoCRF). The acute part of AoCRF may be reversible, and the goal of treatment, as with AKI, is to return the patient to baseline renal function, typically measured by serum creatinine. Like AKI, AoCRF can be difficult to distinguish from chronic kidney disease if the patient has not been monitored by a physician and no baseline (i.e., past) blood work is available for comparison.

Symptoms can vary from person to person. Someone in early stage kidney disease may not feel sick or notice symptoms as they occur. When kidneys fail to filter properly, waste accumulates in the blood and the body, a condition called azotemia. Very low levels of azotaemia may produce few, if any, symptoms. If the disease progresses, symptoms become noticeable (if the failure is of sufficient degree to cause symptoms). Renal failure accompanied by noticeable symptoms is termed uraemia.

Nephroptosis is an abnormal condition in which the kidney drops down into the pelvis when the patient stands up.

Nephroptosis, also called floating kidney or renal ptosis, is an abnormal condition in which the kidney drops down into the pelvis when the patient stands up. It is more common in women than in men. It has been one of the most controversial conditions among doctors in both its diagnosis and its treatments.

It is believed to result from deficiency of supporting perirenal fasciae. The renal fascia is a layer of connective tissue encapsulating the kidneys and the suprarenal glands. The deeper layers below the renal fascia are, in order, the adipose capsule of the kidney (or perirenal fat), the renal capsule and finally the parenchyma of the renal cortex. The spaces about the kidney are typically divided into three compartments: the perinephric space and the anterior and posterior pararenal spaces. 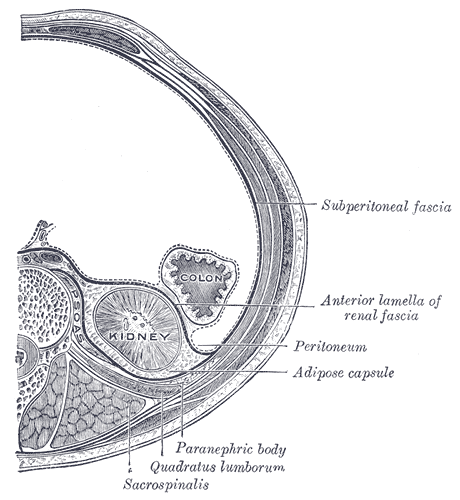 Renal fascia: Transverse section, showing the relations of the capsule of the kidney.

The anterior fascia and posterior fascia fuse laterally to form the lateroconal fascia which fuses with the fascia transversalis.

Nephroptosis is asymptomatic in most patients. However, nephroptosis can be characterized by violent attacks of colicky flank pain, nausea, chills, hypertension, hematuria, and proteinuria.

Patients with symptomatic nephroptosis often complain of sharp pains that radiate into the groin. Many patients also suggest a weighing feeling on the abdomen. Pain is typically relieved by lying down. The attack of colic pain is called Dittel’s crisis or renal paroxysm.

Polycystic kidney disease (PKD) is a cystic genetic disorder of the kidneys.

Autosomal dominant polycystic kidney disease (ADPKD) is the most common of all the hereditary cystic kidney diseases, with an incidence of 1:1,000 to 2:1,000 live births. Studies show that 10% of end-stage renal disease (ESRD) patients treated with hemodialysis in Europe and the U.S. were initially diagnosed and treated for ADPKD. ADPKD does not appear to demonstrate a preference for any particular ethnicity. 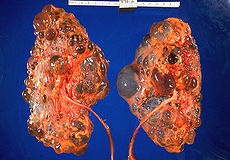 Polycystic Kidney Disease: Polycystic kidney disease, or PKD, is a cystic genetic disorder of the kidneys

ADPKD is characterized by progressive cyst development and bilaterally enlarged kidneys with multiple cysts. There are three genetic mutations in the PKD-1, PKD-2, and PKD3 gene with similar phenotypical presentations. Gene PKD-1 is located on chromosome 16, and codes for a protein involved in regulation of cell cycle and intracellular calcium transport in epithelial cells; it is responsible for 85% of the cases of ADPKD. PKD-2, on chromosome 4, codes for a group of voltage-linked calcium channels. PKD3 recently appeared in research papers as a postulated 3rd gene. At this time, PKD3 has not been proven. Fewer than 10% of cases of ADPKD appear in non-ADPKD families.

Cyst formation begins in utero from any point along the nephron, although fewer than 5% of nephrons are thought to be involved. As the cysts accumulate fluid, they enlarge, separate entirely from the nephron, compress the neighboring renal parenchyma, and progressively compromise renal function.

Studies show that the incidence of autosomal recessive polycystic kidney disease (ARPKD) is 1:20,000 live births, and is typically identified in the first few weeks after birth. Unfortunately, resulting hypoplasia results in a 30% death rate in neonates with ARPKD. In ARPKD, kidneys retain their shape, but are larger than the normal anatomical range with dilated collecting ducts from the medulla to the cortex.