The cervical plexus is the plexus of the ventral rami of the first four cervical spinal nerves.

Describe the cervical plexus and its function

The cervical plexus is a plexus of the ventral rami of the first four cervical spinal nerves located from the C1 to C4 cervical segment in the neck. They are located laterally to the transverse processes between prevertebral muscles from the medial side and anteriolateral to the m. scalenus and m. levator scapulae.

There is anastomosis with the accessory nerve, hypoglossal nerve, and sympathetic trunk. It is located deep in the neck, near the sternocleidomastoid muscle.

Branches and Their Functions

The cervical plexus has two types of branches: cutaneous and muscular.

There are two additional branches that are formed by the posterior roots of the spinal nerves: 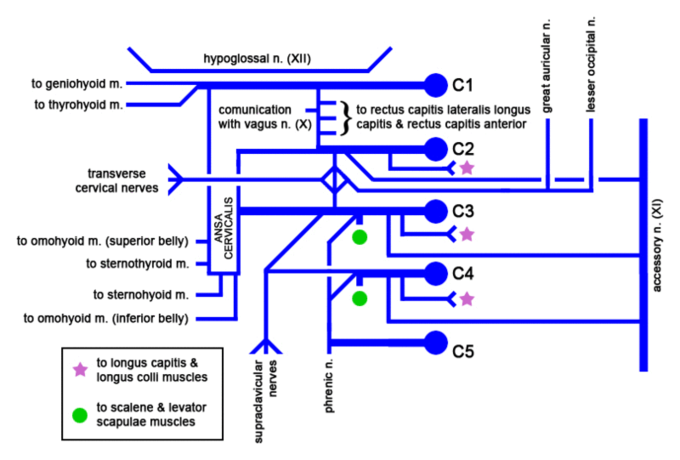 The brachial plexus is formed by the four lower cervical spinal nerves and the first thoracic spinal nerve. 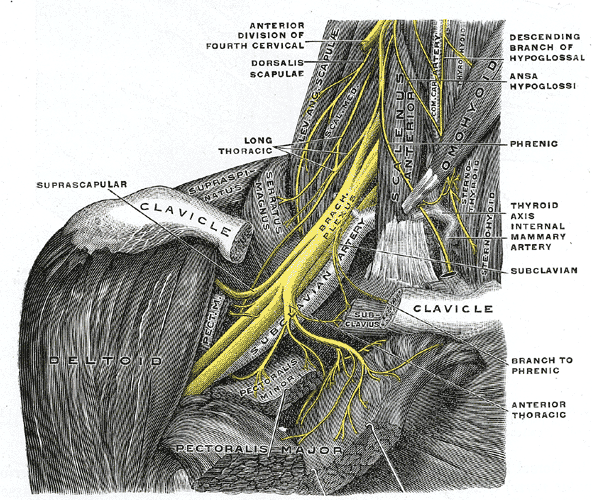 The brachial plexus is a network of nerve fibers that run from the spine that are formed by the ventral rami of the lower four cervical and first thoracic nerve roots (C5–C8, T1).

The brachial plexus proceeds through the neck, the axilla (armpit region), and into the arm. It is a collection of nerves passing through the cervico-axillary canal to reach the axilla and innervate the brachium, the antebrachium, and the hand.

The brachial plexus is responsible for cutaneous and muscular innervation of the entire upper limb, with two exceptions: the trapezius muscle is innervated by the spinal accessory nerve (CN XI) and an area of skin near the axilla is innervated by the intercostobrachial nerve. Lesions on the brachial plexus can lead to severe functional impairment.

The brachial plexus is divided into roots, trunks, divisions, cords, and branches. There are five terminal branches and numerous other preterminal or collateral branches that leave the plexus at various points along its length. Its structure includes:

The lumbar plexus is formed by the subcostal nerve and divisions of the first four lumbar nerves that arise from the middle to lower back.

The lumbar plexus is a nerve plexus in the lumbar region of the body that forms part of the lumbosacral plexus. It is formed by the ventral divisions of the first four lumbar nerves (L1–L4) and from contributions of the subcostal nerve (T12), which is the last thoracic nerve.

This plexus lies within the psoas major muscle. Nerves of the lumbar plexus serve the skin and the muscles of the lower abdominal wall, the thigh, and external genitals. The largest nerve of the plexus is the femoral nerve and it supplies the anterior muscles of the thigh and a part of skin distal to the inguinal ligament. 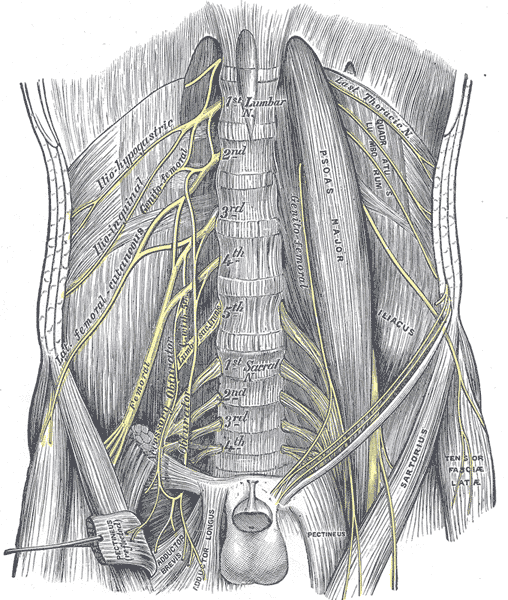 Lumbar plexus: An image of the lumbar plexus with its nerves highlighted in yellow.

Branches of the Lumbar Plexus 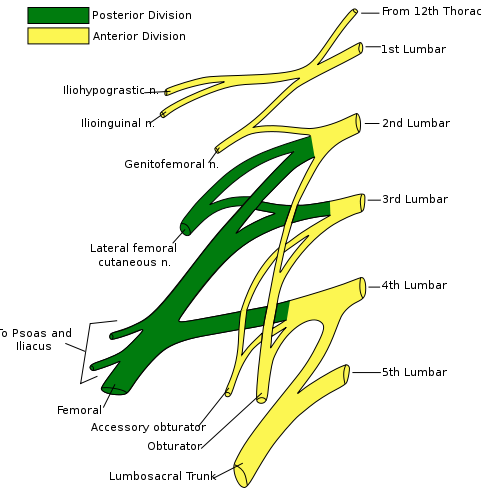 Runs anterior to the psoas major on its proximal lateral border to run laterally and obliquely on the anterior side of the quadratus lumborum. Lateral to this muscle, it pierces the transversus abdominis to run above the iliac crest between that muscle and the abdominal internal oblique. It gives off several motor branches to these muscles and a sensory branch to the skin of the lateral hip. Its terminal branch then runs parallel to the inguinal ligament to exit the aponeurosis of the abdominal external oblique above the external inguinal ring, where it supplies the skin above the inguinal ligament (i.e., the hypogastric region) with the anterior cutaneous branch.

This nerve closely follows the iliohypogastric nerve on the quadratus lumborum but then passes below it to run at the level of the iliac crest. It pierces the lateral abdominal wall and runs medially at the level of the inguinal ligament where it supplies motor branches to both the transversus abdominis and sensory branches through the external inguinal ring to the skin over the pubic symphysis and the lateral aspect of the labia majora in females, and in males, the scrotum.

Pierces the psoas major anteriorly, below the former two nerves to immediately split into two branches that run downward on the anterior side of the muscle. The lateral femoral branch is purely sensory and pierces the vascular lacuna near the saphenous hiatus and supplies the skin below the inguinal ligament. In males, the genital branch runs in the spermatic cord then sends sensory branches to the scrotal skin and supplies motor innervations to the cremaster muscle. In females, it runs in the inguinal canal together with the teres uteri ligament. It then sends sensory branches to the labia majora in females.

Pierces the psoas major on its lateral side and runs obliquely downward below the iliac fascia. Medial to the anterior superior iliac spine, it leaves the pelvic area through the lateral muscular lacuna and enters the thigh by passing behind the lateral end of the inguinal ligament. In the thigh, it briefly passes under the fascia lata before it breaches the fascia and supplies the skin of the anterior thigh.

Leaves the lumbar plexus and descends behind the psoas major on its medial side, follows the linea terminalis into the lesser pelvis, then finally leaves the pelvic area through the obturator canal. In the thigh, it sends motor branches to obturator externus before dividing into an anterior and a posterior branch, both of which continue distally. These branches are separated by the adductor brevis and supply all thigh adductors with motor innervations. The anterior branch contributes a terminal, sensory branch that passes along the anterior border of gracilis and supplies the skin on the medial, distal part of the thigh.

This is the largest and longest of the plexus’ nerves. It gives motor innervation to iliopsoas, pectineus, sartorius, and quadriceps femoris, and sensory innervation to the anterior thigh, posterior lower leg, and hindfoot. In the pelvic area, it runs in a groove between the psoas major and iliacus muscles and gives branches to both. It exits the pelvis through the medial aspect of the muscular lacuna. In the thigh, it divides into numerous sensory and muscular branches and the saphenous nerve, its long sensory terminal branch that continues down to the foot.

The sacral plexus is the plexus of the three sacral spinal nerves (S2–S4) that arise from the lower back just above the sacrum.

Distinguish between the sacral and coccygeal plexuses

The sacral plexus is a nerve plexus that provides motor and sensory nerves for the posterior thigh, most of the lower leg, the entire foot, and part of the pelvis. It is part of the lumbosacral plexus and emerges from the sacral vertebrae (S2–S4). 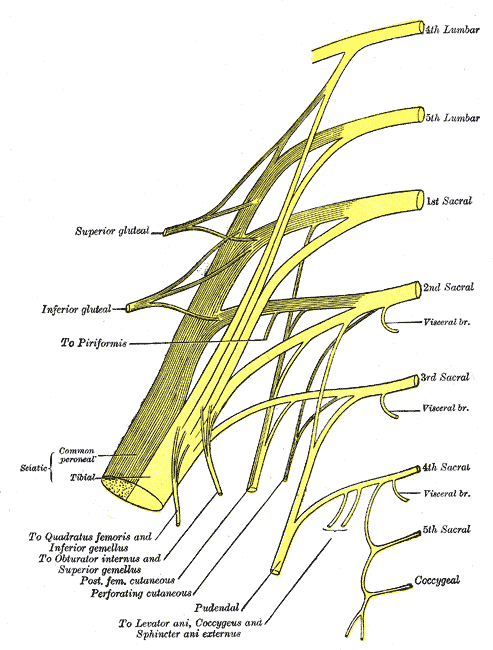 The largest and longest nerve of the human body, the sciatic nerve, is the main branch and gives rami to the motor innervation of the muscles of the foot, the leg, and the thigh.

The sacral plexus is formed by:

The nerves forming the sacral plexus converge toward the lower part of the greater sciatic foramen and unite to form a flattened band from the anterior and posterior surfaces, from which several branches arise.

The band itself is continued as the sciatic nerve, which splits on the back of the thigh into the tibial nerve and the common fibular nerve. These two nerves sometimes arise separately from the plexus and, in all cases, their independence can be shown by dissection.

The coccygeal plexus originates from the S4, S5, and Co1 spinal nerves. It is interconnected with the lower part of the sacral plexus. The only nerve in this plexus is the anococcygeal nerve, which serves sensory innervation of the skin in the coccygeal region.

Sacral plexus diagram: Diagram of the sacral plexus showing the various anterior and posterior nerve branches that arise from each lumbar and sacral nerve.

The spinothalamic tract is a somatosensory tract and the corticospinal tract is a motor tract.

Distinguish between sensory and motor tracts

The spinothalamic tract is a sensory pathway originating in the spinal cord. It transmits information to the thalamus about pain, temperature, itch, and crude touch. The pathway decussates at the level of the spinal cord.

Somatosensory organization is divided into the dorsal column–medial lemniscus tract (the touch/proprioception/vibration sensory pathway) and the anterolateral system, or ALS (the pain/temperature sensory pathway). Both sensory pathways use three different neurons to get information from sensory receptors at the periphery to the cerebral cortex.

These neurons are designated primary, secondary, and tertiary sensory neurons. In both pathways, primary sensory neuron cell bodies are found in the dorsal root ganglia, and their central axons project into the spinal cord.

The types of sensory information transmitted via the spinothalamic tract are described as affective sensation. This means that the sensation is accompanied by a compulsion to act. For instance, an itch is accompanied by a need to scratch, and a painful stimulus makes us want to withdraw from the pain.

There are two subsystems:

Indirect projections are further divided into:

The corticospinal tract is concerned specifically with discrete, voluntary, skilled movements, such as the precise movement of fingers and toes. The brain sends impulses to the spinal cord that relay the message.

The primary purpose of the corticospinal tract is to maintain voluntary motor control of the body and limbs. However, connections to the somatosensory cortex suggest that the pyramidal tracts are also responsible for modulating sensory information from the body.

Some of these connections cross the midline; therefore, each side of the brain is responsible for controlling muscles for the limbs on opposite sides of the body. However, control of trunk muscles is on the same side of the body.

After a patient’s pyramidal tracts are injured, the patient is paralyzed on the corresponding side of the body. Fortunately, they can re-learn some crude, basic motions, but not fine movements. This implies that the connections to these tracts are crucial for fine movement, and only partial recovery is possible if they are damaged.