The fourth week of gestation is characterized by the flexion of the superior portion of the neural tube to create the mesencephalon.

Trophoblast cells surrounding the embryonic cells proliferate and invade deeper into the uterine lining. They will eventually form the placenta and embryonic membranes. At the end of the fourth week the yolk sac presents the appearance of a small pear-shaped vesicle (the umbilical vesicle) opening into the digestive tube by a long narrow tube, the vitelline duct.

The chorion undergoes rapid proliferation and forms numerous processes. The chorionic villi, which invade and destroy the uterine decidua and at the same time absorb from it nutritive materials for the growth of the embryo. Until about the end of the second month of pregnancy the villi cover the entire chorion, and are almost uniform in size, but after this they develop unequally. 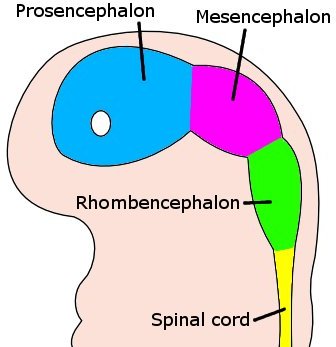 Embryo brain at four weeks: At four weeks the embryo’s brain can be differentiated into the proscephalon, mesencephalon, and rhombencephalon. A white circle represents the area of the optical vesicle.

The embryonic heart attains functionality and starts beating at 22 days after conception (about five weeks after the last menstrual period). It can sometimes be seen as flickering in the embryonic chest by an ultrasound performed during the fourth week after conception. 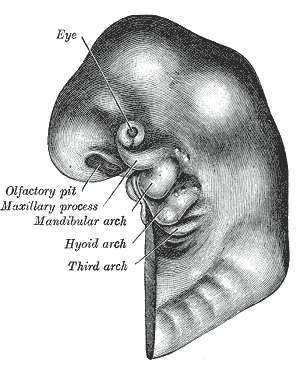