External respiration is the formal term for gas exchange. It describes both the bulk flow of air into and out of the lungs and the transfer of oxygen and carbon dioxide into the bloodstream through diffusion. While the bulk flow of air from the external environment happens due to pressure changes in the lungs, the mechanisms of alveolar gas exchange are more complicated. The primary three components of external respiration are the surface area of the alveolar membrane, the partial pressure gradients of the gasses, and the matching of perfusion and ventilation.

The alveoli have a very high surface area to volume ratio that allows for efficient gas exchange. The alveoli are covered with a high density of capillaries that provide many sites for gas exchange.

The walls of the alveolar membrane are thin and covered with a fluid, extra-cellular matrix that provides a surface for gas molecules in the air of the lungs to diffuse into, from which they can then diffuse into the capillaries. 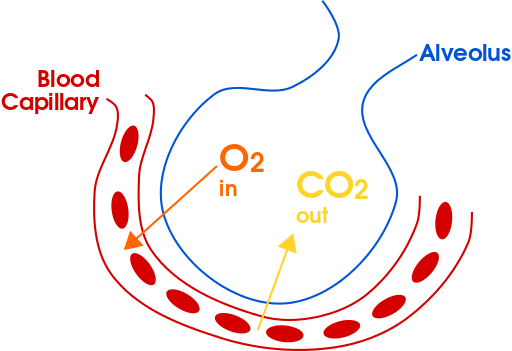 Gas exchange in the alveolus: External respiration is a result of partial pressure gradients, alveolar surface area, and ventilation and perfusion matching.

Oxygen has a partial pressure gradient of about 60 mmHg (100 mmHg in alveolar air and 40 mmHg in deoxygenated blood ) and diffuses rapidly from the alveolar air into the capillary.

Equilibrium between the alveolar air and capillaries is reached quickly, within the first third of the length of the capillary within a third of a second. The partial pressure of oxygen in the oxygenated blood of the capillary after oxygen loading is about 100 mmHg.

The process is similar in carbon dioxide. The partial pressure gradient for carbon dioxide is much smaller compared to oxygen, being only 5 mmHg (45 mmHg in deoxygenated blood and 40 mmHg in alveolar air).

The exchange of gas and blood supply to the lungs must be balanced in order to facilitate efficient external respiration. While a severe ventilation–perfusion mismatch indicates severe lung disease, minor imbalances can be corrected by maintaining air flow that is proportional to capillary blood flow, which maintains the balance of ventilation and perfusion.

Perfusion in the capillaries adjusts to changes in PAO2. Constriction in the airways (such as from the bronchospasms in an asthma attack) lead to decreased PAO2 because the flow of air into the lungs is slowed.

In response, the arteries being supplied by the constricted airway undergo vasocontriction, reducing the flow of blood into those alveoli so that the perfusion doesn’t become much greater relative to the decreased ventilation (a type of ventilation–perfusion mismatch called a shunt).

Alternatively, breathing in higher concentrations of oxygen from an oxygen tank will cause vasodilation and increased blood perfusion in the capillaries.

Cellular respiration is the metabolic process by which an organism obtains energy through the reaction of oxygen with glucose.

Internal respiration refers to two distinct processes. The first is the exchange of gasses between the bloodstream and the tissues. The second is the process of cellular respiration, from which cells utilize oxygen to perform basic metabolic functions.

Gas exchange occurs in the alveoli  so that oxygen is loaded into the bloodstream and carbon dioxide is unloaded from the bloodstream. Afterwards, oxygen is brought to the left side of the heart via the pulmonary vein, which pumps it into systemic circulation.

Regarding the partial pressure gradients in systemic capillaries, they have a PaO2 of 100mmHg and a PaCO2 of 40mmHG within the capillary and a PaO2 of 40 mmHg and PaCO2 of 45 mmHg inside issue cells, which allows gas exchange to occur.

Cellular respiration is the metabolic process by which an organism obtains energy through the reaction of oxygen with glucose to produce water, carbon dioxide and ATP, which is the functional source of energy for the cell. The oxygen supply for cellular respiration comes from the external respiration of the respiratory system.

The net formula for cellular respiration is:

The carbon dioxide waste is the result of the carbon from glucose (C6H12O6) being broken down to produce the pyruvate and NADH intermediates needed to produce ATP at the end of respiration. The energy stored in ATP can then be used to drive processes that require energy, including biosynthesis, locomotion, or transportation of molecules across cell membranes.

Cellular respiration can occur anaerobically without oxygen, such as through lactic acid fermentation. Human cells may use lactic acid fermentation in muscle tissue during strenuous exercise when there isn’t enough oxygen to power the tissues. This process is very inefficient compared to aerobic respiration, as without oxidative phosphorylation, the cell cannot produce nearly as much ATP (2 ATP compared to 38 during cellular respiration).

Hemoglobin is the primary transporter of oxygen with an oxygen binding capacity between 1.36 and 1.37 ml O2 per gram Hgb.

Describe the process of oxygen transport

About 98.5% of the oxygen in a sample of arterial blood in a healthy human breathing air at sea-level pressure is bound to the hemoglobin in blood (Hgb). Hemoglobin is a protein found in red blood cells (also called erythrocytes).

There are roughly 270 million hemoglobin molecules in a single red blood cell, and each contains 4 heme groups. The function of Hgb is to provide a binding site for oxygen to carry oxygen throughout the bloodstream to the  systemic tissues for cellular respiration. 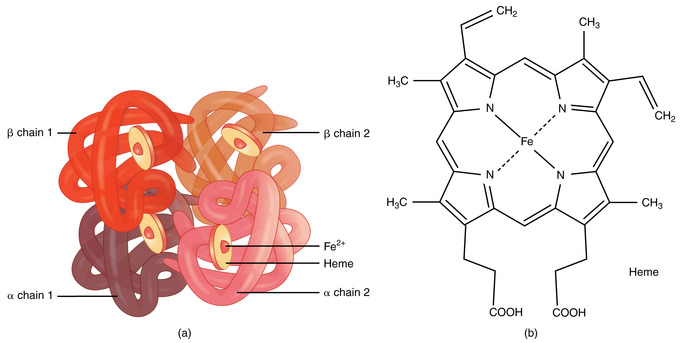 Hemoglobin: Hemoglobin is the iron-containing, oxygen-transport metalloprotein in the red blood cells of all vertebrates.

About 1.5% of oxygen is physically dissolved in the other blood liquids and not connected to Hgb. It has an oxygen binding capacity between 1.36 and 1.37 ml O2 per gram Hgb.

The percentage of oxygen that is saturated in the hemoglobin of blood is generally represented by a curve that shows the relationship between PaO2 and O2 saturation. Saturation of O2 in hemoglobin is an indicator for how much O2 is able to reach the tissues of the body.

Higher PaO2 means higher saturation of oxygen in blood. Under normal conditions the PaO2 in systemic blood is equal to 50%, about 26.6 mmHg,; this is called the P50.

The curve starts to plateau at PaO2 higher than 60 mmHG, meaning that increases in PaO2 after that point won’t significantly increase saturation. This also means that the approximate carrying capacity for oxygen in hemoglobin has been reached and excess oxygen won’t go into hemoglobin.

The carrying capacity can be increased if more hemoglobin is added to the system, such as through greater red blood cell generation in high altitude, or from blood transfusions. The lower areas of the curve show saturation when oxygen is unloaded into the tissues. 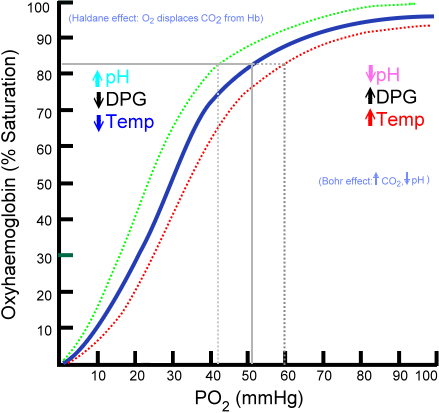 Rightward shifts indicate a decreased affinity for the binding of hemoglobin, so that less oxygen binds to hemoglobin, and more oxygen is unloaded from it into the tissues. The curve shifts right during decreased blood pH (called the Bohr effect), increased temperature, and during exercise among other things.

Anemia (a disorder marked by a decreased red blood cell count and less hemoglobin) also causes a rightward shift, but also changes the shape of the curve so that it moves downward as well as a result of the reduced levels of hemoglobin.

Leftward shifts indicate an increased affinity for the binding of hemoglobin, so that more oxygen binds to hemoglobin, but less oxygen is unloaded from it into the tissues. Causes of leftward shifts include increased blood pH, decreased temperature, and carbon monoxide exposure. Carbon monoxide binds to hemoglobin in place of oxygen, so that less oxygen reaches the tissues; this can be fatal if severe enough.

CO2 is carried in blood in three different ways: dissolved in plasma, bound to hemoglobin, or as a biocarbonate ion.

Dissolved in the Plasma 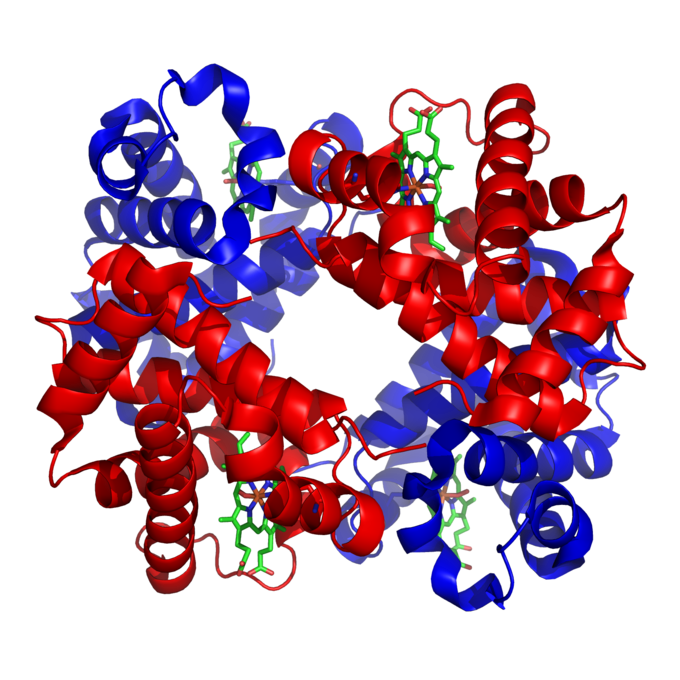 About 10% of carbon dioxide in the human body is transported this way. Carbanimohemoglobin gives red blood cells a bluish color, which is one of the reasons why the veins that carry deoxygenated blood appear to be blue.

This property means that hemoglobin will primarily carry oxygen in systemic circulation until it unloads that oxygen and is able to carry a relatively higher amount of carbon dioxide. This is due to deoxygenated blood’s increased capacity to carry carbon dioxide, and from the carbon dioxide loaded from the tissues during tissue gas exchange.

This means that carbon dioxide reacts with water to form carbonic acid, which dissociates in solution to form hydrogen ions and bicarbonate ions.

Bicarbonate is also carried in the fluids of tissues besides the blood vessels, especially in the duodenum and intestine, so problems in those organs can cause a respiratory system response.

Transport to the Alveoli

For carbon dioxide stored in bicarbonate, it undergoes a reaction reversal. Bicarbonate ions dissolved in the plasma enter the red blood cells by diffusing across a chloride ion gradient (replacing chloride inside the cell), and combining with hydrogen to form carbonic acid.