Dalton’s law of partial pressures states that the pressure of a mixture of gases is the sum of the pressures of the individual components.

Dalton’s law states that the total pressure exerted by the mixture of inert (non-reactive) gases is equal to the sum of the partial pressures of individual gases in a volume of air. This empirical law was observed by John Dalton in 1801 and is related to the ideal gas laws.

Mathematically, the pressure of a mixture of gases can be defined as the sum of the partial pressures of each of the gasses in air.

For the purposes of gas exchange, O2 and CO2 are mainly considered due to their metabolic importance in gas exchange. Because gasses flow from areas of high pressure to areas of low pressure, atmospheric air has higher partial pressure of oxygen than alveolar air (PO2= 159mm Hg compared to PAO2= 100mm Hg).

While inhaled air is similar to atmospheric air due to Dalton’s law, exhaled air will have relative concentrations that are in between atmospheric and alveolar air due to the passive diffusion of gasses during gas exchange.

Dalton’s law is only truly applicable in every situation to ideal gasses. Therefore most gasses will not follow it exactly, especially in conditions of extremely high pressure, or in situations where intermolecular forces act to keep the gasses together.

Henry’s law states that the amount of a gas that dissolves in a liquid is directly proportional to the partial pressure of that gas.

Henry’s law states that at a constant temperature, the amount of a gas that dissolves in a liquid is directly proportional to the partial pressure of that gas in equilibrium with that liquid. It was formulated by William Henry in 1803. 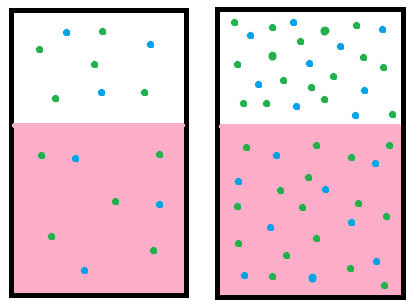 Henry’s law: Henry’s law states that when a gas is in contact with the surface of a liquid, the amount of the gas which will go into solution is proportional to the partial pressure of that gas.

Henry’s law also applies to the solubility of other substances that aren’t gaseous, such as the equilibrium of organic pollutants in water being based on the relative concentration of that pollutant in the media its suspended in.

Henry’s law can be put into mathematical terms (at constant temperature):

The solubility captures the tendency of a substance to go towards equilibrium in a solution, which explains why gasses that have the same partial pressure may have different tendencies to dissolve.

The main application of Henry’s law in respiratory physiology is to predict how gasses will dissolve in the alveoli and bloodstream during gas exchange. The amount of oxygen that dissolves into the bloodstream is directly proportional to the partial pressure of oxygen in alveolar air.