A hormone is a secreted chemical messenger that enables communication between cells and tissues throughout the body.

Summarize the mechanisms of hormone action

A hormone is a chemical messenger that enables communication between cells. Hormones are secreted by the glands of the endocrine system and they serve to maintain homeostasis and to regulate numerous other systems and processes, including reproduction and development.

The glands of the endocrine system secrete hormones directly into the extracellular environment. The hormones then diffuse to the bloodstream via capillaries and are transported to the target cells through the circulatory system. This allows hormones to affect tissues and organs far from the site of production or to apply systemic effects to the whole body.

Hormone-producing cells are typically specialized and reside within a particular endocrine gland, such as thryocytes in the thyroid gland. Hormones exit their cell of origin through the process of exocytosis or by other means of membrane transport.

Cellular recipients of a particular hormonal signal may be one of several cell types that reside within a number of different tissues. This is so in the case of insulin, which triggers a diverse range of systemic physiological effects. Different tissue types may also respond differently to the same hormonal signal. As a result, hormonal signaling is elaborate and hard to dissect.

Hormones activate target cells by diffusing through the plasma membrane of the target cells (lipid-soluble hormones) to bind a receptor protein within the cytoplasm of the cell, or by binding a specific receptor protein in the cell membrane of the target cell (water-soluble proteins). In both cases, the hormone complex will activate a chain of molecular events within the cell that will result in the activation of gene expression in the nucleus.

The reaction of the target cells may then be recognized by the original hormone-producing cells, leading to a down-regulation in hormone production. This is an example of a homeostatic negative feedback loop. 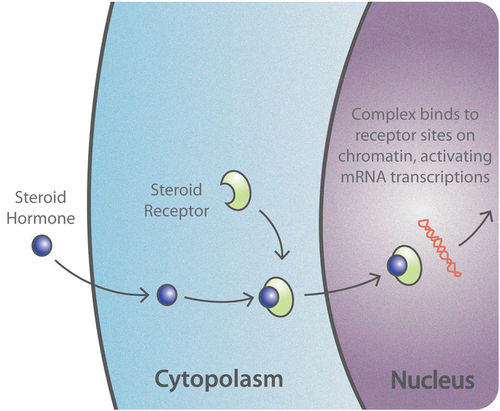 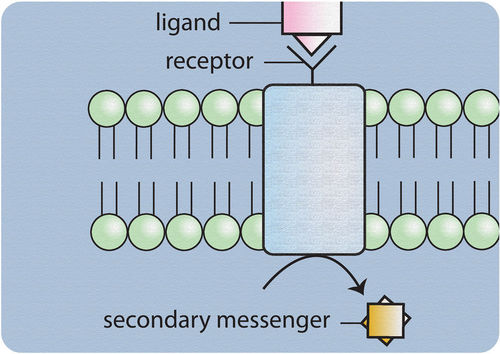 A hormone receptor is a molecule that binds to a specific hormone. Receptors for peptide hormones tend to be found on the plasma membrane of cells, whereas receptors for lipid-soluble hormones are usually found within the cytoplasm.

Upon hormone binding, the receptor can initiate multiple signaling pathways that ultimately lead to changes in the behavior of the target cells.

The hormone activity within a target cell is dependent on the effective concentration of hormone-receptor complexes that are formed. The number of these complexes is in turn regulated by the number of hormone or receptor molecules available, and the binding affinity between hormone and receptor.

The receptors for these hormones need to be localized to the cells’ plasma membranes. Following an interaction with the hormones, a cascade of secondary effects within the cytoplasm of the cell is triggered, often involving the addition or removal of phosphate groups to cytoplasmic proteins, changes in ion channel permeability, or an increase in the concentrations of intracellular molecules that may act as secondary messengers, such as cyclic AMP.

Lipophilic hormones—such as steroid or thyroid hormones—are able to pass through the cell and nuclear membrane; therefore receptors for these hormones do not need to be, although they sometimes are, located in the cell membrane. 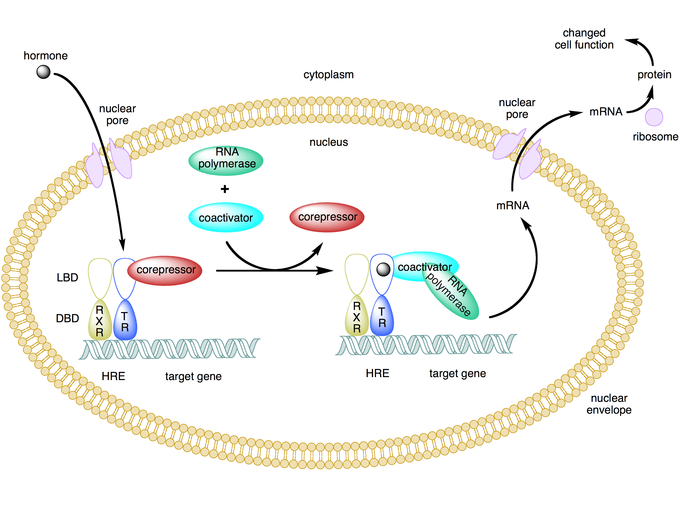 Example hormone receptor: The thyroid hormone receptor (TR) heterodimerized to the RXR. In the absence of a ligand, the TR is bound to a corepressor protein. Ligand binding to the TR causes a dissociation of co-repressor and recruitment of co-activator proteins, which in turn recruit additional proteins (such as RNA polymerase) that are responsible for the transcription of downstream DNA into RNA, and eventually into protein that results in a change in cell function.

There are three classes of hormones: peptide hormones, lipid hormones, and monoamine hormones.

A hormone is a chemical released by a cell or a gland in one part of the body that sends out messages that affect cells in other parts of the organism.

There are three classes of hormones:

Some peptide hormones contain carbohydrate side chains  and are termed glyco-proteins, such as the follicle-stimulating hormone. All peptide hormones are hydrophilic and are therefore unable to cross the plasma membrane alone. 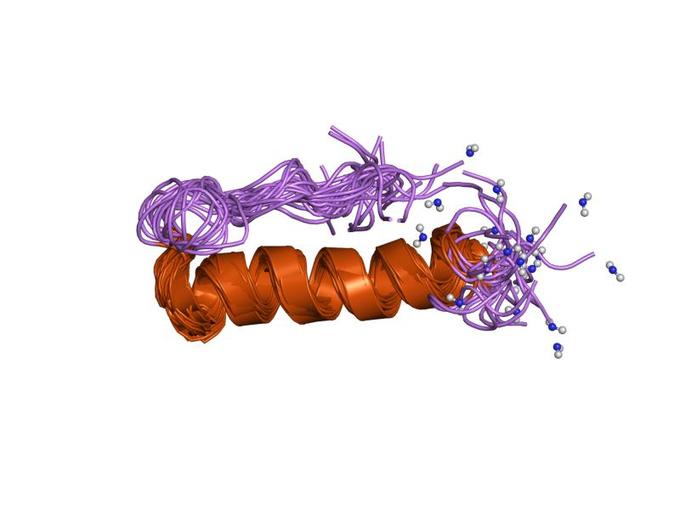 Lipid and phospholipid-derived hormones are produced from lipids such as linoleic acid and arachidonic acid. Steroid hormones, which form the majority of lipid hormones, are derived from carbohydrates; for example, testosterone is produced primarily in the testes and plays a key role in development of the male reproductive system.

Monoamine hormones are derived from single aromatic amino acids like phenylalanine, tyrosine, and tryptophan. For example, the tryptophan-derived melatonin that is secreted by the pineal gland regulates sleep patterns.

Hormones synthesized by the endocrine glands are transported throughout the body by the bloodstream.

The endocrine system is a system of ductless glands that secrete hormones directly into the circulatory system to be carried long distances to other target organs that regulate key body and organ functions.

Some endocrine glands secrete into a portal system rather than the systemic circulation that allows for the direct targeting of hormones. For example, hormones secreted by the pancreas pass into the hepatic portal vein that transports them directly to the liver.

When bound with a transport protein hormones are typically inactive, and their release is often triggered in regions of low hormone concentration or can be controlled by other factors. Therefore, transport proteins can act as a reservoir within the circulatory system and help insure an even distribution of hormones within an organ or tissue. 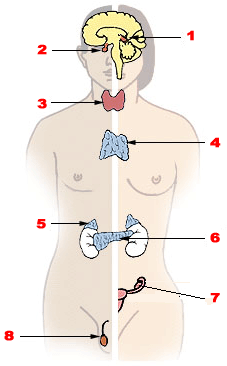