Ventilation is the rate at which gas enters or leaves the lung.

The Types of Ventilation Rates

In respiratory physiology, the ventilation rate is the rate at which gas enters or leaves the lung. Ventilation is generally expressed as volume of air times a respiratory rate.

The volume of air can refer to tidal volume (the amount inhaled in an average breath) or something more specific, such as the volume of dead space in the airways. The three main types of ventilation rates used in respiratory physiology are:

Additionally, minute ventilation can be described as the sum of alveolar and dead space ventilation, provided that the respiratory rate used to derive them is in terms of breaths per minute.

The three types of ventilation are mathematically linked to one another, so changes in one ventilation rate can cause the change of the other. This is most apparent in changes of the dead space volume. Breathing through a snorkeling tube and having a pulmonary embolism both increase the amount of dead space volume (through anatomical versus alveolar dead space respectively), which will reduce alveolar ventilation. 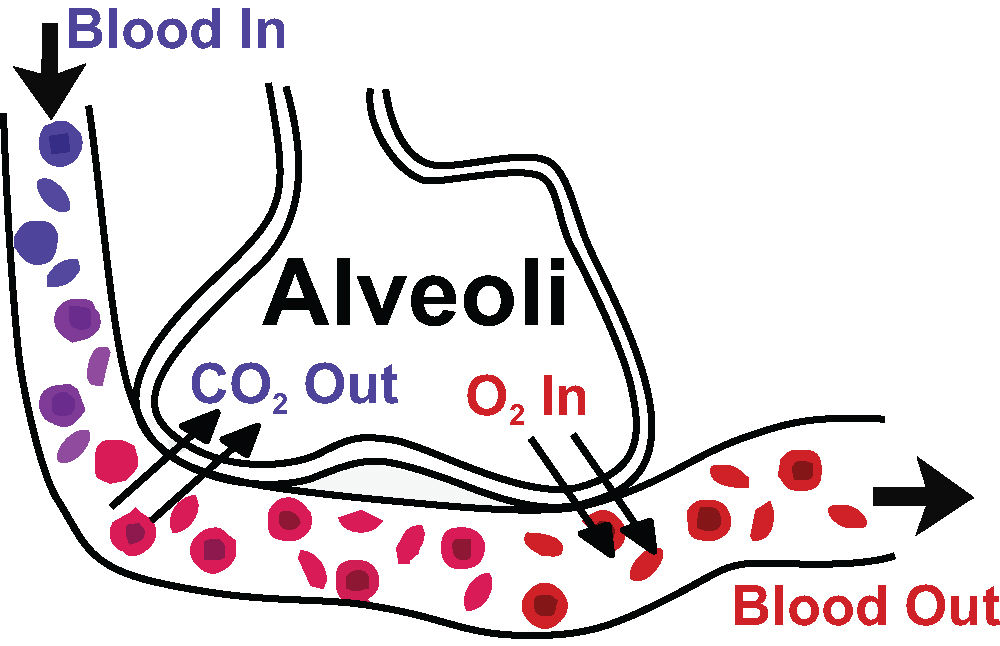 When gasses dissolve in the bloodstream during ventilation, they are generally described by the partial pressure of the gasses. Partial pressure more specifically refers to the relative concentration of those gasses by the pressure they exert in a dissolved state.

In respiratory physiology, PAO2 and PACO2,refer to the partial pressures of oxygen and carbon dioxide in the alveoli.

Under normal conditions, PAO2 is about 100 mmHg, while PaO2 is 80–100 mmHg in systemic arteries, but 40–50 mmHg in the deoxygenated blood of the pulmonary artery going to the lungs.

Recall that gasses travel from areas of high pressure to areas of low pressure, so the greater pressure of oxygen in the alveoli compared to that of the deoxygenated blood explains why oxygen can passively diffuse into the bloodstream during gas exchange.

Conversely, PACO2 is 35 mmHg, while PaCO2 is about 40–45 mmHG in systemic arteries and 50 mmHg in the pulmonary artery. The partial pressure, and thus concentration of carbon dioxide, is greater in the in the capillaries of the alveoli compared to the alveolar air, so carbon dioxide will passively diffuse from the bloodstream into the alveoli during gas exchange.

Additionally, because PaCO2 is an indicator of the concentration of carbon dioxide in arterial blood, it can be used to measure blood pH and identify cases of respiratory acidosis and alkalkosis.

Inhalation is the flow of air into an organism that is due to a pressure difference between the atmosphere and alveolus.

Outline the mechanics of inspiration

Inspiration refers to inhalation—it is the flow of the respiratory current into an organism. In humans it is the movement of ambient air through the airways and into the alveoli of the lungs.

The Process of Inspiration

Inspiration begins with the contraction of the diaphragm, which results in expansion of the thoracic cavity and the pleural cavity. The pleural cavity normally has a lower pressure compared to ambient air (–3 mmHg normally and typically –6 mmHg during inspiration), so when it expands, the pressure inside the lungs drops.

The force of the intrapleural pressure is even enough to hold the lungs open during inpiration despite the natural elastic recoil of the lung. The alveolar sacs also expand as a result of being filled with air during inspiration, which contributes to the expansion inside the lung.

Eventually, the pressure inside the lung becomes less negative as the volume inside the lung increases and, when pressure and volume stabilize, air movement stops, inspiration ends, and expiration (exhalation) will begin. Deeper breaths have higher tidal volumes and require a greater drop in intrapleural pressure compared to shallower breaths. 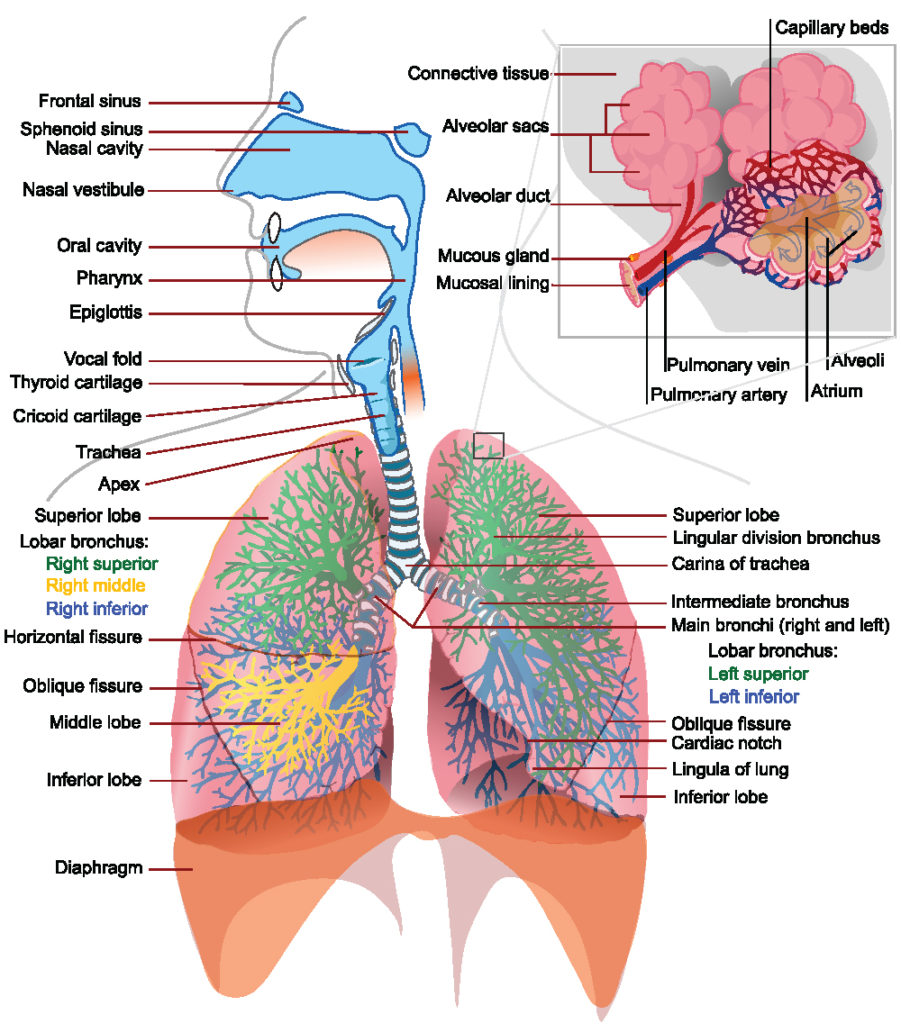 Respiratory System: Resistance in any part of the respiratory tract can cause problems.

The diaphragm is the primary muscle involved in breathing, however several other muscles play a role in certain circumstances. These muscles are referred to as accessory muscles of inhalation.

For example, singers need a lot of air to support the powerful voice production needed for singing. A common problem in novice singers is breathing with the accessory muscles of the neck, shoulder, and ribs instead of the diaphragm, which gives them a much smaller air supply than what is needed to sing properly.

Exhalation (or expiration) is the flow of the respiratory current out of the organism.

Outline the mechanics of expiration

Expiration, also called exhalation, is the flow of the respiratory current out of the organism. The purpose of exhalation is to remove metabolic waste, primarily carbon dioxide from the body from gas exchange. The pathway for exhalation is the movement of air out of the conducting zone, to the external environment during breathing.

Respiratory System: As the diaphragm relaxes, the pleural cavity contracts, which exerts pressure on the lungs, which reduces the volume of the lungs as air is passively pushed out of the lungs.

The Process of Expiration

Expiration is typically a passive process that happens from the relaxation of the diaphragm muscle (that contracted during inspiration). The primary reason that expiration is passive is due to the elastic recoil of the lungs. The elasticity of the lungs is due to molecules called elastins in the extracellular matrix of lung tissues and is maintained by surfactant, a chemical that prevents the elasticity of the lungs from becoming too great by reducing surface tension from water. Without surfactant the lungs would collapse at the end of expiration, making it much more difficult to inhale again. Because the lung is elastic, it will automatically return to its smaller size as air leaves the lung.

Exhalation begins when inhalation ends. Just as the plueral cavity’s increased negative pressure leads to air uptake during inhalation, the pleural cavity will contract during the exhalation (due to relaxation of the diaphragm),which exerts pressure on the lungs and causes the pressure inside the cavity to be less negative. An increase in pressure leads to a decrease in volume inside the lung, and air is pushed out into the airways as the lung returns to its smaller size. The pleural cavity is so important to breathing because it’s pressure changes the volume of the lungs, and it provides a friction-less space for the lung to expand and contract against during breathing.

While expiration is generally a passive process, it can also be an active and forced process. There are two groups of muscles that are involved in forced exhalation.

This happens due to elastic properties of the lungs, as well as the internal intercostal muscles that lower the rib cage and decrease thoracic volume. As the thoracic diaphragm relaxes during exhalation it causes the tissue it has depressed to rise superiorly and put pressure on the lungs to expel the air.

Expiration can be either voluntary or involuntary in order to serve different purposes for the body. These two types of expiration are controlled by different centers within the body.

Voluntary expiration is actively controlled. It is generally defined by holding air in the lungs and releasing it at a fixed rate, which enables control over when and how much air to exhale. It is required for voice production during speech or singing, which requires very specific control over air, or even simpler activities, like blowing out a candle on one’s birthday. The nervous system component that controls voluntary expiration is the motor cortex (the ascending respiratory pathway), because it controls muscle movements, but this pathway isn’t fully understood, and there are many other possible sites in the brain that may also be involved.

Involuntary expiration is not under conscious control, and is an important component for metabolic function. Examples include breathing during sleep or meditation. Changes in breathing patterns may also occur for metabolic reasons, such as through increased breathing rate in people with acidosis from negative feedback. The principle neural control center for involuntary expiration consists of the medulla oblongata and the pons, which are located in the brainstem directly beneath the brain. While these two structures are involved in neural respiratory control, they also have other metabolic regulatory functions for other body systems, such as the cardiovascular system.

Breathing is an autonomic process that moves air in and out of the lungs.

Describe the process of breathing in humans

Characteristics of the Breathing Patterns