Give an example and describe a homeostatic process.

The human organism consists of trillions of cells working together for the maintenance of the entire organism. While cells may perform very different functions, the cells are quite similar in their metabolic requirements. Maintaining a constant internal environment with everything that the cells need to survive (oxygen, glucose, mineral ions, waste removal, etc.) is necessary for the well-being of individual cells and the well-being of the entire body. The varied processes by which the body regulates its internal environment are collectively referred to as homeostasis.

Homeostasis, in a general sense, refers to stability, balance, or equilibrium. Physiologically, it is the body’s attempt to maintain a constant and balanced internal environment, which requires persistent monitoring and adjustments as conditions change. Adjustment of physiological systems within the body is called homeostatic regulation, which involves three parts or mechanisms: (1) the receptor, (2) the control center, and (3) the effector.

The ultimate goal of homeostasis is the maintenance of equilibrium around the set point. While there are normal fluctuations from the set point, the body’s systems will usually attempt to revert to it. A change in the internal or external environment (a stimulus) is detected by a receptor; the response of the system is to adjust the deviation parameter toward the set point. For instance, if the body becomes too warm, adjustments are made to cool the animal. If the blood’s glucose rises after a meal, adjustments are made to lower the blood glucose level by moving the nutrient into tissues in the command center that require it, or to store it for later use.

Blood glucose homeostasis: An example of how homeostasis is achieved by controlling blood sugar levels after a meal.

Outline the various types of processes utilized by animals to ensure thermoregulation.

Types of Thermoregulation (Ectothermy vs. Endothermy) 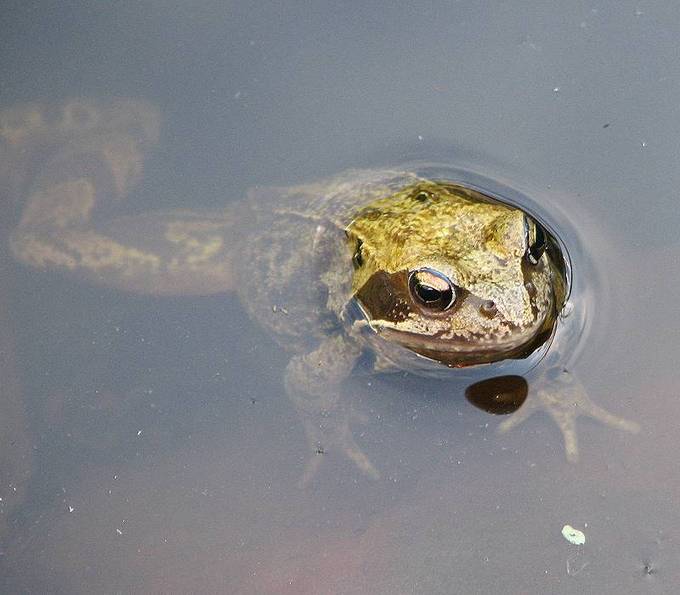 Ectotherm: The Common frog is an ecotherm and regulates its body based on the temperature of the external environment.

An ectotherm, from the Greek (ektós) “outside” and (thermós) “hot,” is an organism in which internal physiological sources of heat are of relatively small or quite negligible importance in controlling body temperature. Since ectotherms rely on environmental heat sources, they can operate at economical metabolic rates. Ectotherms usually live in environments in which temperatures are constant, such as the tropics or ocean. Ectotherms have developed several behavioral thermoregulation mechanisms, such as basking in the sun to increase body temperature or seeking shade to decrease body temperature.

In contrast to ectotherms, endotherms regulate their own body temperature through internal metabolic processes and usually maintain a narrow range of internal temperatures. Heat is usually generated from the animal’s normal metabolism, but under conditions of excessive cold or low activity, an endotherm generate additional heat by shivering. Many endotherms have a larger number of mitochondria per cell than ectotherms. These mitochondria enables them to generate heat by increasing the rate at which they metabolize fats and sugars. However, endothermic animals must sustain their higher metabolism by eating more food more often. For example, a mouse (endotherm) must consume food every day to sustain high its metabolism, while a snake (ectotherm) may only eat once a month because its metabolism is much lower. 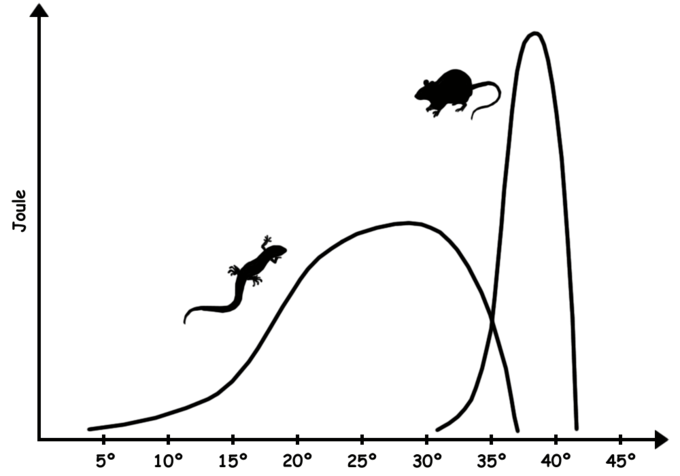 Heat can be exchanged between an animal and its environment through four mechanisms: radiation, evaporation, convection, and conduction. Radiation is the emission of electromagnetic “heat” waves. Heat radiates from the sun and from dry skin the same manner. When a mammal sweats, evaporation removes heat from a surface with a liquid. Convection currents of air remove heat from the surface of dry skin as the air passes over it. Heat can be conducted from one surface to another during direct contact with the surfaces, such as an animal resting on a warm rock. 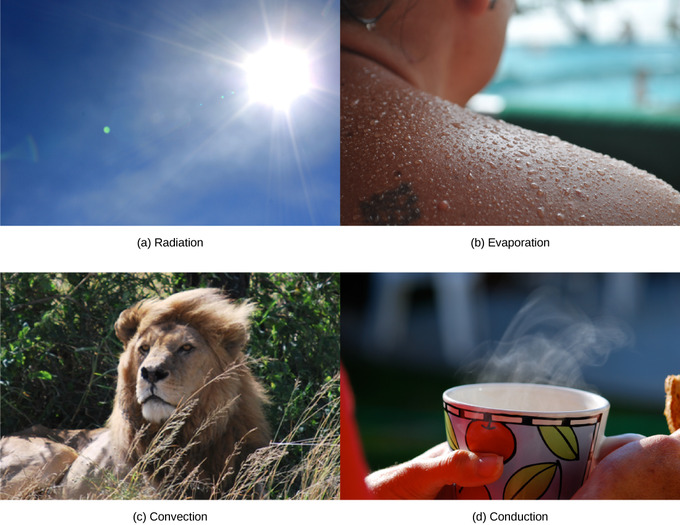 Mechanisms for heat exchange: Heat can be exchanged by four mechanisms: (a) radiation, (b) evaporation, (c) convection, or (d) conduction.

Animals have processes that allow for heat conservation and dissipation in order to maintain a homeostatic internal body temperature.

Animals conserve or dissipate heat in a variety of ways. In certain climates, endothermic animals have some form of insulation, such as fur, fat, feathers, or some combination thereof. Animals with thick fur or feathers create an insulating layer of air between their skin and internal organs. Polar bears and seals live and swim in a subfreezing environment, yet they maintain a constant, warm, body temperature. The arctic fox uses its fluffy tail as extra insulation when it curls up to sleep in cold weather. Mammals have a residual effect from shivering and increased muscle activity: arrector pili muscles create “goose bumps,” causing small hairs to stand up when the individual is cold; this has the intended effect of increasing body temperature. Mammals use layers of fat to achieve the same end; the loss of significant amounts of body fat will compromise an individual’s ability to conserve heat.

Endotherms use their circulatory systems to help maintain body temperature. For example, vasodilation brings more blood and heat to the body surface, facilitating radiation and evaporative heat loss, which helps to cool the body. However, vasoconstriction reduces blood flow in peripheral blood vessels, forcing blood toward the core and the vital organs found there, conserving heat. Some animals have adaptions to their circulatory system that enable them to transfer heat from arteries to veins, thus, warming blood that returns to the heart. This is called a countercurrent heat exchange; it prevents the cold venous blood from cooling the heart and other internal organs. This adaption, which can be shut down in some animals to prevent overheating the internal organs, is found in many animals, including dolphins, sharks, bony fish, bees, and hummingbirds. In contrast, similar adaptations (as in dolphin flukes and elephant ears) can help cool endotherms when needed. 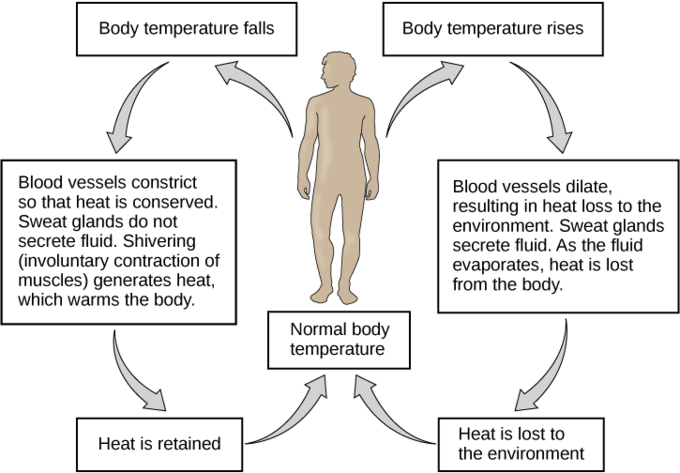 Many animals, especially mammals, use metabolic waste heat as a heat source. When muscles are contracted, most of the energy from the ATP used in muscle actions is wasted energy that translates into heat. In cases of severe cold, a shivering reflex is activated that generates heat for the body. Many species also have a type of adipose tissue called brown fat that specializes in generating heat.

Ecothermic animals use changes in their behavior to help regulate body temperature. For example, a desert ectothermic animal may simply seek cooler areas during the hottest part of the day in the desert to keep from becoming too warm. The same animals may climb onto rocks to capture heat during a cold desert night. Some animals seek water to aid evaporation in cooling them, as seen with reptiles. Other ectotherms use group activity, such as the activity of bees to warm a hive to survive winter.