Structure of a Nerve

A nerve is the primary structure of the peripheral nervous system and is composed of bundles of axons.

Describe the structure of nerves

Nerves: An illustration of the main nerves of the arm.

A nerve is an enclosed, cable-like bundle of axons (the projections of neurons) in the peripheral nervous system (PNS). A nerve provides a structured pathway that supports the electrochemical nerve impulses transmitted along each of the axons.

In the central nervous system, the analogous structures are known as tracts. Neurons are sometimes referred to as nerve cells, although this term is misleading since many neurons do not occupy nerves, and nerves also include non-neuronal support cells (glial cells) that contribute to the health of enclosed neurons.

Finally, the entire nerve is wrapped in a layer of connective tissue called the epineurium. See the following illustrations of these structures.

The endoneurium consists of an inner sleeve of material called the glycocalyx and a mesh of collagen. Nerves are bundled along with blood vessels, which provide essential nutrients and energy to the enclosed, and metabolically demanding, neurons.

In this respect, endoneurial fluid is similar to cerebrospinal fluid in the central nervous system. During nerve irritation or injury, the amount of endoneurial fluid may increase at the site of damage. This increase in fluid can be visualized using magnetic resonance neurography to diagnose nerve damage.

A nerve conveys information in the form of electrochemical impulses (known as nerve impulses or action potentials) carried by the individual neurons that make up the nerve. These impulses are extremely fast, with some myelinated neurons conducting at speeds up to 120 m/s. The impulses travel from one neuron to another by crossing a synapse, and the message is converted from electrical to chemical and then back to electrical.

Nerves can be categorized into two groups based on function:

Neurologists usually diagnose disorders of the nerves by a physical examination, including the testing of reflexes, walking and other directed movements, muscle weakness, proprioception, and the sense of touch. This initial exam can be followed with tests such as nerve conduction study, electromyography, or computed tomography.

Nerves are primarily classified based on their direction of travel to or from the CNS, but they are also subclassified by other nerve characteristics.

List the different ways that nerves can be classified

Nerves are categorized into three, primary groups based on the direction of signal transmission within the nervous system. 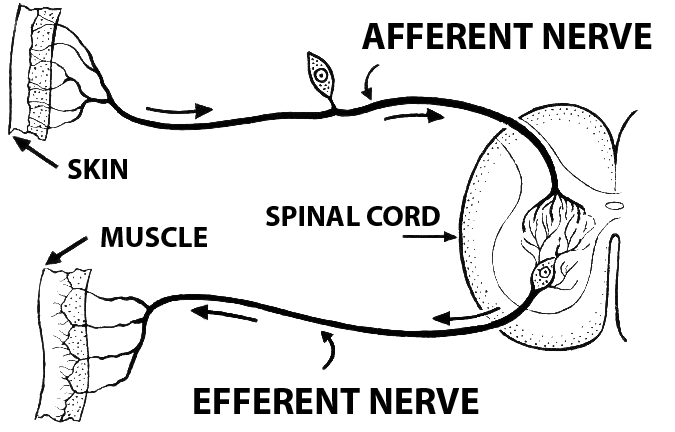 The A group is further subdivided into four types (A-alpha, A-beta, A-delta, and A-gamma fibers) based on the information carried by the fibers and the tissues they innervate.

C fiber axons are grouped together into what is known as Remak bundles. These occur when an unmyelinated Schwann cell bundles the axons close together by surrounding them. The Schwann cell keeps them from touching each other by squeezing its cytoplasm between the axons.

C fibers are considered polymodal because they can often respond to combinations of thermal, mechanical, and chemical stimuli.

A-delta and C fibers both contribute to the detection of diverse painful stimuli. Because of their higher conduction velocity, A-delta fibers are responsible for the sensation of a sharp, initial pain and respond to a weaker intensity of stimulus.

These nerve fibers are associated with acute pain and therefore constitute the afferent portion of the reflex arc that results in pulling away from noxious stimuli.  An example is the retraction or your hand from a hot stove. Slowly conducting, unmyelinated C fibers, by contrast, carry slow, longer-lasting pain sensations.