Organization at the Tissue Level

Nervous tissue is the main component of the nervous system, which includes the brain, spinal cord, and nerves.

Describe the characteristics of nervous tissue

Nervous tissue is one of four major classes of tissues. It is specialized tissue found in the central nervous system and the peripheral nervous system. It consists of neurons and supporting cells called neuroglia.

The nervous system is responsible for the control of the body and the communication among its parts. Nervous tissue contains two categories of cells—neurons and neuroglia.

Neurons are highly specialized nerve cells that generate and conduct nerve impulses. A typical neuron consists of dendrites, the cell body, and an axon.

Neuron: This image illustrates the parts of a neuron. The dendrites receive incoming signals while axons propagate signals away from the neuron cell body. The myelin sheath surrounds and insulates the axon. 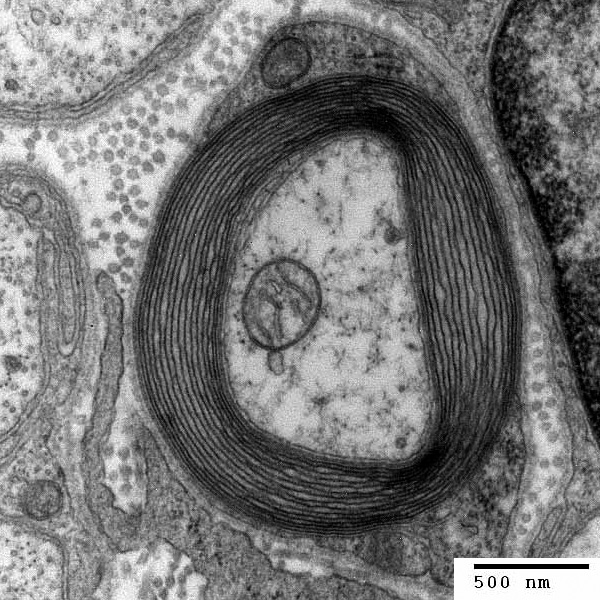 Illustration of the Schwann Cells and the Myelin Sheath: Transmission electron micrograph of a myelinated axon. The myelin layer (concentric) surrounds the axon of a neuron, showing Schwann cells.

The nervous system consists of nervous tissue, which is composed of two principal types of cells called neuron and neuroglia.

There are six types of neuroglia—four in the central nervous system and two in the PNS. These glial cells are involved in many specialized functions apart from support of the neurons. Neuroglia in the CNS include astrocytes, microglial cells, ependymal cells and oligodendrocytes. In the PNS, satellite cells and Schwann cells are the two kinds of neuroglia.

Astrocytes are shaped like a star and are the most abundant glial cell in the CNS. They have many radiating processes which help in clinging to the neurons and capillaries. They support and brace the neurons and anchor them to the nutrient supply lines. They also help in the guiding the migration of young neurons. Astrocytes control the chemical environment around the neurons.

Microglial cells are small and ovoid un shape with thorny processes. They are found in the CNS. When invading microorganism or dead neurons are present, the microglial cells can transform into a phagocytic macrophage and help in cleaning the neuronal debris.

Ependymal cells are ciliated and line the central cavities of the brain and spinal cord where they form a fairly permeable barrier between the cerebrospinal fluid that fills these cavities and the tissue cells of the CNS.

Oligodendrocytes line up along the nerves and produce an insulating cover called myelin sheath. They are found in the CNS.

Satellite cells surround neuron cell bodies in the peripheral nervous system (PNS). They are analogous to the astrocytes in the CNS.

Schwann cells surround all nerve fibers in the peripheral nervous system and form myelin sheaths around the nerve fibers. They are found in the PNS. Their function is similar to oligodendrocytes.

Neurons consist of cell body and one or more slender processes. The neuronal cell body consists of a nucleus and rough endoplasmic reticulum or Nissl Bodies. The cell body is the major biosynthetic center of a neuron and contains the usual organelles for the synthesis of proteins and other chemicals. Arm like processes extend from the cell body to all neurons.

The two types of neuron processes are called dendrites and axons. Dendrites are motor neurons that are short and have a large surface area for receiving signals from other neurons. Dendrites convey incoming messages towards the cell body and are therefore called the receptive input region.

The axon arises from the cone shaped portion of the cell body called the axon hillock. Functionally, the axon is the conducting region of the neuron and is responsible for generating and transmitting impulses typically away from the cell body. A single axon routes the nerve impulse from the cell body to another neuron or an effector organ. The axon can have many terminal branches, so each time the nerve fires, it can stimulate more than one cell.