Other Endocrine Tissues and Organs

The eicosanoids are signaling molecules that exert complex control over many bodily systems, mainly in inflammation or immunity.

Describe the synthesis and function of eicosanoids

In biochemistry, eicosanoids are signaling molecules made by oxidation of 20-carbon essential fatty acids (EFAs). The networks of controls that depend upon eicosanoids are among the most complex in the human body.

Eicosanoids are derived from either omega-3 (ω-3) or omega-6 (ω-6) EFAs. The ω-6 eicosanoids are generally pro-inflammatory; ω-3s are much less so. An excess of
ω-6 to ω-3 fatty acids is common in western diets and is thought to encourage certain inflammatory disorders such as arthritis, cardiovascular disease, and cancers of the digestive system.

There are four families of eicosanoids:

For each, there are two or three separate series, derived either from an ω-3 or ω-6 EFA. These series’ different activities largely explain the health effects of ω-3 and ω-6 fats.

Eicosanoids are not stored within cells; they are synthesized as required. They derive from the EFAs that make up the cell and nuclear membranes. Biosynthesis is initiated when a cell is activated by mechanical trauma, cytokines, growth factors, or other stimuli.

Eicosanoids exert complex control over many bodily systems, mainly in inflammation or immunity, and as messengers in the central nervous system. Eicosanoids typically act as local hormones, acting on the same cell or nearby cells and then are rapidly inactivated.

Anti-inflammatory drugs such as aspirin and other NSAIDs act by down-regulating eicosanoid synthesis to prevent local and systemic inflammation.

Describe growth factors in terms of cytokines and hormones

Growth factors, cytokines, and hormones are all chemical messengers that mediate intercellular communication. Confusion arises due to their overlaps in function and definition.

A growth factor is a naturally occurring substance capable of stimulating cellular growth, proliferation, and cellular differentiation. An example is granulocyte macrophage colony-stimulating factor (GM-CSF), a growth factor that stimulates the production of white blood cells. Growth factors are typically cytokines or hormones, but not all cytokines and hormones are growth factors.

A cytokine is a small protein involved in cell signaling. Some cytokines are involved in growth, such as GM-CSF, and so are classed as growth factors, but many others are not. Confusingly, cytokine and growth factor are sometimes used as interchangeable terms.

A cytokine differs from a hormone in that it is not secreted from a gland.

A hormone is any member of a class of signaling molecules secreted by ductless glands that are transported by the circulatory system. As with cytokines, some are involved with growth, such as the growth hormone produced by the anterior pituitary gland, and may be classed as growth factors, but others are not.

Hormones are secreted from specialized ductless glands into the circulatory system, differentiating them from cytokines. 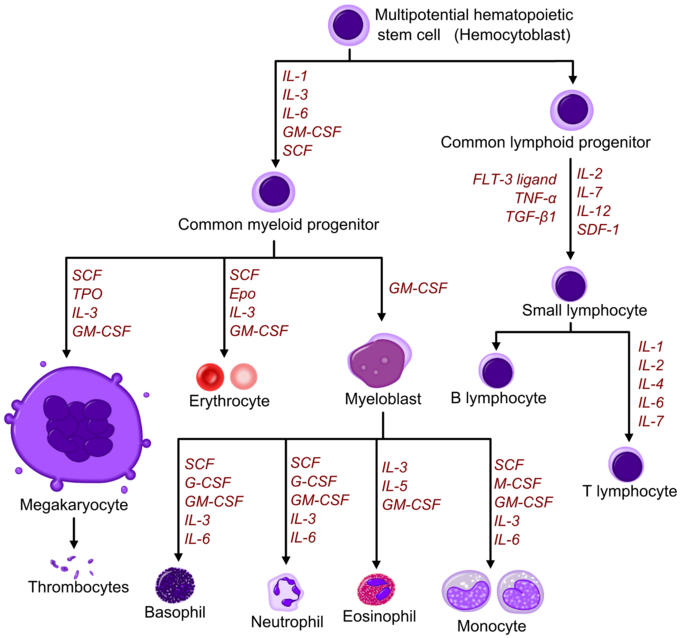 Many tissues within the body release hormones including the placenta, kidneys, digestive system, and adipose tissue.

Differentiate among the non-glandular, hormone-producing structures of the endocrine system

There are several other organs in the body that secrete hormones although they are generally not thought of as being part of the endocrine system.

The kidneys secrete a variety of hormones, including erythropoietin, and the enzyme renin. Erythropoietin is released in response to hypoxia in the renal circulation. It stimulates erythropoiesis (production of red blood cells ) in the bone marrow. Part of the renin-angiotensin- aldosterone system, renin is an enzyme involved in the regulation of aldosterone levels.

Atrial natriuretic hormone (ANH) is a powerful vasodilator and a protein hormone secreted by heart muscle cells. It is involved in the homeostatic control of body water, sodium, potassium, and fat.

ANH is released by muscle cells in the upper chambers (atria) of the heart in response to high blood pressure. ANH acts to reduce the water, sodium, and adipose loads on the circulatory system to reduce blood pressure.

There are at least five hormones that aid and regulate the digestive system in mammals.

Adipose, or fat, tissue is loose connective tissue composed of adipocytes. Its main role is to store energy in the form of lipids, although it also cushions and insulates the body.

Adipose tissue has in recent years been recognized as a major endocrine organ, as it produces hormones such as:

The placenta endocrine function in humans, aside from serving as the conduit for oxygen and nutrients for the fetus, secretes hormones that are important during pregnancy, such as human chorionic gonadotropin, human placental lactogen, estrogen, and progesterone.

The ovary is a paired, ovum-producing, reproductive organ located in the lateral wall of the pelvis in a region called the ovarian fossa. The fossa usually lies beneath the external iliac artery and in front of the ureter and the internal iliac artery.

Ovary: Blood supply of the human female reproductive organs. The left ovary is visible above the label ovarian arteries.

The ovaries are not attached to the fallopian tubes but to the outer layer of the uterus via the ovarian ligaments. Usually each ovary takes turns releasing eggs every month; however, if there was a case where one ovary was absent or dysfunctional then the other ovary would continue providing eggs to be released.

Ovaries secrete both estrogen and progesterone. Estrogen is responsible for the development of the secondary sex characteristics of human females at puberty and for the maturation and maintenance of the reproductive organs in their mature functional state. Progesterone functions with estrogen by promoting menstrual cycle changes in the endometrium. The ovaries also secrete testosterone, although at a much lower level than in males.

The testes are the male reproductive gonads in humans. Like the ovaries, to which they are homologous, testes are components of both the reproductive system and the endocrine system. The primary functions of the testes are to produce sperm (spermatogenesis) and androgens, primarily testosterone. 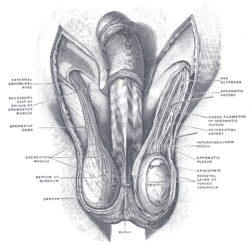 The functions of the testicles are influenced by gonadotropic hormones, that are produced by the anterior pituitary. Luteinizing hormone results in testosterone release. The presence of both testosterone and follicle-stimulating hormone is needed to support spermatogenesis. Testosterone is secreted by
Leydig cells, which are located between the
seminiferous tubules.

The testes are located in the scrotum (a sac of skin between the upper thighs). In the male fetus, the testes develop near the kidneys, then descend into the scrotum just before birth. Each testis is about 1 1/2 inches long by 1 inch wide.

The placenta is an organ that connects the developing fetus to the mother’s blood supply.

Explain the role of the placenta in the endocrine system

The placenta is an organ connecting the developing fetus to the uterine wall to allow nutrient uptake, waste elimination, and gas exchange via the mother’s blood supply.

The placenta functions as a feto-maternal organ with two components:

In humans, the placenta averages 22 cm in length and 2–2.5 cm in thickness; it typically weights 500g and is a dark-reddish color due to the large quantities of blood contained within.

Placenta: The placenta is an organ connecting the developing fetus to the uterine wall to allow nutrient uptake, waste elimination, and gas exchange via the mother’s blood supply.

The umbilical cord inserts into the chorionic plate of the placenta. Vessels branch out over the surface of the placenta and further divide to form a network covered by a thin layer of cells. This results in the formation of villous tree structures that allow for the efficient exchange of gasses and nutrients.

Functions of the Placenta

The major functions of the placenta include:

Waste products excreted from the fetus—urea, uric acid, and creatinine—are transferred to the maternal blood by diffusion across the placenta.

IgG antibodies can pass through the human placenta, thereby providing protection to the fetus in utero. The placenta functions as a selective maternal–fetal barrier against the transmission of microbes to the fetus. However, deficiency in this function may cause mother-to-child transmission of infectious diseases.

The placenta also secretes hormones that are important during pregnancy. These hormones include:

Human chorionic gonadotropin (hCG) is the first placental hormone produced, which can be found in maternal blood and urine as early as the first missed menstrual period (shortly after implantation has occurred) through about the hundredth day of pregnancy.

hCG also ensures that the corpus luteum continues to secrete progesterone and estrogen. Progesterone is very important during pregnancy because, when its secretion decreases, the endometrial lining will slough off and pregnancy will be lost. hCG suppresses the maternal immunologic response so the placenta is not rejected.

Human placental lactogen is lactogenic and promotes mammary gland growth in preparation for lactation in the mother. It also regulates maternal glucose, protein, and fat levels so they are always available to the fetus.

Estrogen stimulates the development of secondary female sex characteristics. It contributes to the woman’s mammary gland development in preparation for lactation and stimulates uterine growth to accommodate the growing fetus.