The thymus is a specialized organ that “educates” T cells or T lymphocytes, which are part of the adaptive immune system.

Describe the, structure, location, and role of the thymus in the immune system

Thymectomy, the surgical removal of the thymus, is done most often to gain access to the heart in surgeries to correct congenital heart defects performed in the neonatal period. In neonates, the relative size of the thymus obstructs surgical access to the heart. Surprisingly, removal of the thymus does not result in a T cell immunodeficiency. This is because sufficient T cells are generated during fetal life prior to birth. These T cells are long-lived and can proliferate by homeostatic proliferation throughout the patient’s lifetime. However, there is evidence of premature immune aging in patients thymectomized during early childhood.

The thymus is a specialized organ of the immune system. It consists of primary lymphoid tissue, which provides a site for the generation and maturation of T lymphocytes, critical cells of the adaptive immune system.

Structure of the Thymus

The thymus is of a pinkish-gray color, soft, and lobulated on its surfaces. The organ enlarges during childhood into adolescence and begins to atrophy at puberty due to hormonal changes. After puberty, the thymus shrinks rapidly with age, eventually becoming almost indistinguishable from the surrounding fatty tissue.

The thymus consists of two lateral lobes placed in close contact along the middle line situated partly in the thorax, resting in the chest beneath the neck. The two lobes differ slightly in size, may be united or separated, and may be broken down into smaller lobules. It is covered with a capsule of connective tissue that provides structural support.

Histologically, the thymus contains mature lymphocytes, immature lymphocytes, and stroma, while lobule tissues consist of an inner medulla and an outer cortex. The cortex and medulla play different roles in the development of T cells. The cortex is the site of T cell generation and proliferation, while the medulla connects to the venous bloodstream and allows for transport of mature inactive T cells to the lymph nodes and transport of immature T cells from bone marrow tissue into the thymus cortex for proliferation and maturation.

Function of the Thymus 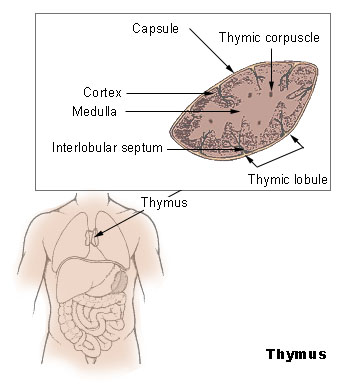 Thymus: The thymus is the site of T-cell generation and maturation.

The thymus provides an environment for T cells to mature and proliferate, a process called lymphopoeisis. First, immature T cells generated in bone marrow travel to the cortex tissues of the thymus through the bloodstream. Then the immature T cells undergo proliferative expansion, in which they are exposed to growth factors and antigen receptors are formed. Then the T cells are sorted by the thymus so that only T cells that express T-cell receptors (TcRs) and can bind to foreign MHC molecules will survive. The surviving cells will not mistake self-molecules for antigens. Only 2-4% of T cells survive this sorting process. The thymus is most active early in life for building a large reservoir of T cells. Though removal of the thymus in childhood causes severe immunodeficiency, later in life this is not an issue because of the proliferation of thymus activity early in life.

Central tolerance is another function of the thymus. Autoimmune diseases occur when central tolerance is lost, which causes lymphocytes to recognize host molecules as antigens and attack them, even if those tissues otherwise function normally. The thymus sorts T cells so that they will be inactive towards host molecules, though sometimes a few T cells evade this sorting process and may initiate an autoimmune disease. Though the thymus is mostly effective at preventing this occurrence, those with certain genetic characteristics (such as altered MHC complexes) may be more likely to develop autoimmune diseases with the few T-cells that aren’t properly selected by the thymus.

The spleen, similar to a large lymph node, acts primarily as a blood filter in the mononuclear phagocyte system of the immune system.

Survival is possible without a spleen. However, retrospective epidemiological studies of World War II veterans found that those who had their spleens removed on the battlefield showed significant mortality risk from pneumonia and a significant excess of mortality from ischemic heart disease, but not from other conditions.

The spleen is the largest distinct organ of the lymphatic system. Similar in structure to a large lymph node, it acts primarily as a blood filter. Despite this important function, a healthy life is possible after removal. The spleen plays important roles in regards to red blood cells and the immune system.

Structure of the Spleen

The spleen is located in the left upper quadrant of the abdomen. It is similar to an enlarged lymph node but is a bit more complex. The spleen is made up of two distinct tissue types:

Unlike lymph nodes, the spleen possesses only efferent lymphatic vessels, because it only filters blood instead of lymph fluid. The splenic artery forms its primary blood supply. The spleen is unique in respect to its development within the gut because it is derived from mesenchymal tissue rather than endoderm tissue during embryonic development. However, it still shares the same blood supply as the foregut organs in the abdominal cavity.

Function of the Spleen 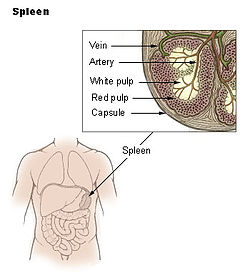 Spleen: This diagram of the spleen indicates the vein, artery, white pulp, red pulp, and capsule.

The primary function of the spleen is blood filtration. Blood cells have a lifespan of roughly 120 days. When blood passes through the red pulp of the spleen, healthy blood cells easily pass, while older red blood cells are caught phagocytized by the macrophages within. The macrophages also remove pathogens, denatured hemoglobin, and other cellular debris. Iron from old or damaged hemoglobin content in the blood is filtered out and sent to the liver so that new red blood cells can be created. Antigens are also filtered by the red pulp, which may be presented to naive lymphocytes in the white pulp of the spleen. This stimulates the same type of adaptive immune response that occurs in the lymph nodes.

The spleen is also important for generating new red blood cells early in embryonic development, but this function stops after birth. The spleen may also function as a reservoir of blood and platelets during hypovolemic shock, which occurs when overall tissue perfusion falls due to severe dehydration or severe bleeding or hemorrhage. During hypovolemic shock, the spleen can release up to a cup of extra blood to help mitigate the complications of fluid loss.

The spleen is often removed surgically if it becomes damaged or infected. This causes modest increases in circulating white blood cells and platelets, diminished responsiveness to some vaccines, and increased susceptibility to infection by bacteria and protozoa. In particular, there is an increased risk to infection from gram negative bacteria that cause pneumonia. Besides these increased risks, the loss of the spleen does not cause major immune system impairment, and most people will still live normal and healthy lives because the lymph nodes and liver perform the same functions as the spleen. In particular, those with splenomegaly (an enlarged spleen that could rupture) or splenic cancers are typically better off living without their spleen than living with the risk of severe bleeding from a ruptured spleen or the plethora of symptoms caused by splenic cancer and its metastases.

The tonsils are one of the immune system’s first lines of defense against ingested or inhaled foreign pathogens.

Describe the role of tonsils in the immune system

Location and Structure of the Tonsils

There are four pairs of tonsils located within the pharynx. They function similarly but have a few structural differences.

The tonsils are made of secondary lymphoid tissue and covered with an epithelium characteristic of the part of the body where they are located. For example, the adenoids and tubal tonsils are covered with the ciliated psuedostratified columnar epithelium of the nasopharynx, while the palatine and lingual tonsils are made up of the non-keratinized stratified squamous epithelium of the oropharynx. The tonsils also contain very deep and narrow folds in their tissues called crypts. Like the thymus, the tonsils reach their largest size near puberty and gradually atrophy thereafter.

Function of the Tonsils 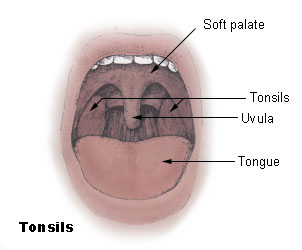 Tonsils: Palatine tonsils can be seen on the left and right sides at the back of the throat.

The tonsils primarily facilitate adaptive immune responses in the upper respiratory tract, one of the most common pathways for pathogen entry in the body. In a way, the tonsils are the “first line of defense” against potential respiratory pathogens. They contain specialized M cells that collect antigens produced by respiratory tract pathogens. The secondary lymphoid tissue within the tonsils functions like the same type of the tissue in lymph nodes. Captured antigens are presented to B and T cells within the tonsil, then the B cells migrate to germinal centers within the tonsil as an adaptive immune response is initiated. Additionally, evidence exists that suggests that tonsils may play a role in  T cell maturation and development like the thymus does, but more research is needed.

Tonsil removal (tonsillectomy) is a common procedure to treat swollen and infected lymph nodes (tonsillitis). It does not appear to cause weakened immune function. Chronic infection of the adenoids can cause adenoid hypertrophy, increases in cell size from repeated damage. Enlarged tonsils can make it more difficult to breath and disrupt normal mucus drainage in the pharynx, so removal is generally recommended in those cases. Squamous cell carcinomas (epithelial tumor) and lymphomas (lymphocyte tumor) can also develop in the tonsillar tissue, and removal is a key treatment. Epidemiological studies show no significant change in immune system function in those that have a tonsillectomy, but minor increases in helper T cell levels and minor decreases in IgA levels (an antibody produced by B cells) were observed.