The circulatory system is the continuous system of tubes that pumps blood to tissues and organs throughout the body.

Resistance to flow must be overcome to push blood through the circulatory system. If resistance increases, either pressure must increase to maintain flow, or flow rate must reduce to maintain pressure. Numerous factors can alter resistance, but the three most important are vessel length, vessel radius, and blood viscosity. With increasing length, increasing viscosity, and decreasing radius, resistance is increased. The arterioles and capillary networks are the main regions of the circulatory system that generate resistance, due the small caliber of their lumen. Arterioles in particular are able to rapidly alter resistance by altering their radius through vasodilation or vasoconstriction.

Flow is the movement of the blood around the circulatory system. A relatively constant flow is required by the body’s tissues, so pressure and resistance are altered to maintain this consistency. A too-high flow can damage blood vessels and tissue, while flow that’s too low means tissues served by the blood vessel may not receive sufficient oxygen to function.

Humans have a closed cardiovascular system, meaning that blood never leaves the network of arteries, veins, and capillaries.

Humans have a closed cardiovascular system, meaning that the blood never leaves the network of arteries, veins, and capillaries. Blood is circulated through blood vessels by the pumping action of the heart, pumped from the left ventricle through arteries to peripheral tissues and returning to the right atrium through veins. It then enters the right ventricle and is pumped through the pulmonary artery to the lungs and returns to the left atrium through the pulmonary veins. Blood then enters the left ventricle to be circulated again.

Distribution of blood can be modulated by many factors, including increasing or decreasing heart rate and dilation or constriction of blood vessels. 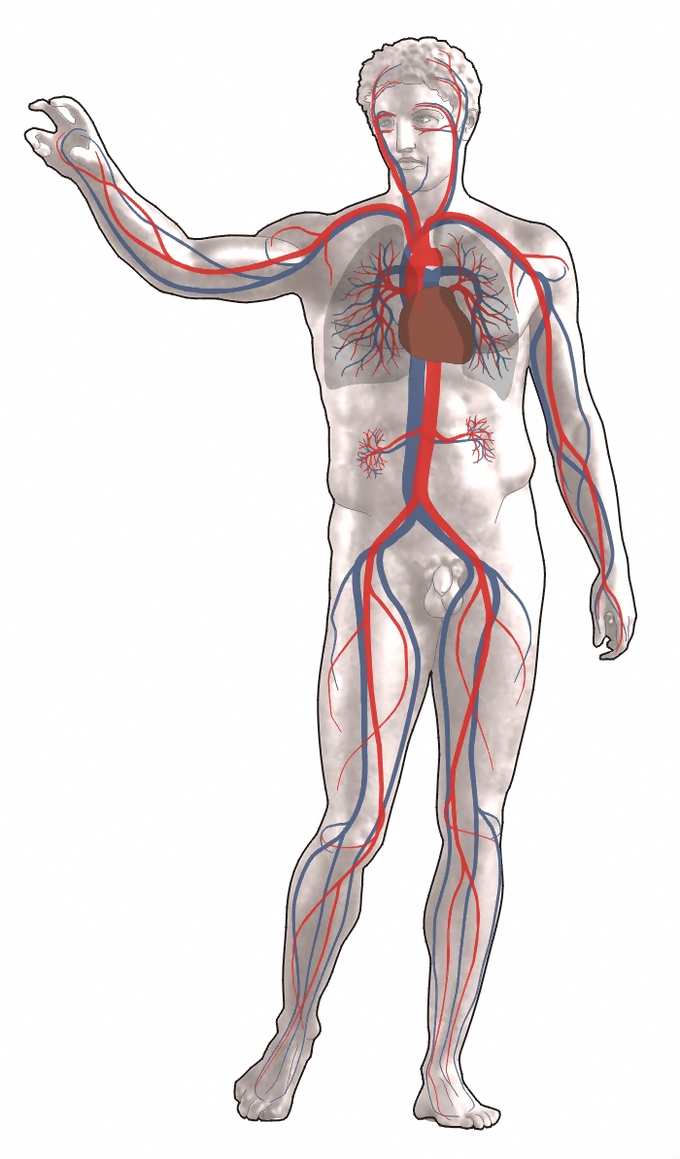 Vasoconstriction is the narrowing of the blood vessels resulting from contraction of the muscular wall of the vessels, particularly the large arteries and small arterioles. The process is the opposite of vasodilation, the widening of blood vessels. The process is particularly important in staunching hemorrhage and acute blood loss. When blood vessels constrict, the flow of blood is restricted or decreased, thus retaining body heat or increasing vascular resistance. This makes the skin turn paler because less blood reaches the surface, reducing the radiation of heat.

On a larger level, vasoconstriction is one mechanism by which the body regulates and maintains mean arterial pressure. Substances causing vasoconstriction are called vasoconstrictors or vasopressors. Generalized vasoconstriction usually results in an increase in systemic blood pressure, but it may also occur in specific tissues, causing a localized reduction in blood flow. The extent of vasoconstriction may be slight or severe depending on the substance or circumstance.

Vasodilation refers to the widening of blood vessels resulting from relaxation of smooth muscle cells within the vessel walls, particularly in the large veins, large arteries, and smaller arterioles. The process is essentially the opposite of vasoconstriction. When blood vessels dilate, the flow of blood is increased due to a decrease in vascular resistance. Therefore, dilation of arterial blood vessels (mainly the arterioles) causes a decrease in blood pressure. The response may be intrinsic (due to local processes in the surrounding tissue) or extrinsic (due to hormones or the nervous system). Additionally, the response may be localized to a specific organ (depending on the metabolic needs of a particular tissue, as during strenuous exercise), or it may be systemic (seen throughout the entire systemic circulation). Substances that cause vasodilation are termed vasodilators.