Aerobic and anaerobic exercise work to increase the mechanical efficiency of the heart.

During exercise, the human body needs a greater amount of oxygen to meet the increased metabolic demands of the muscle tissues. Various short-term respiratory changes must occur in order for those metabolic demands to be reached. Eventually exercise can induce long term cardiovascular and respiratory changes, which can be both healthy and unhealthy.

During exercise, carbon dioxide levels (the metabolic waste) rise in arterial blood. Carbon dioxide induces vasodilation in the arteries while the heart rate increases, which leads to better blood flow and tissue perfusion, and better oxygen delivery to the tissues.

This is one reason why muscles may become sore during exercise, though the lactic acid is eventually removed through conversion to glucose in the liver.

In the long run, exercise results in increased levels of arterial oxygen levels at rest, due to chemoreceptor desensitization to carbon dioxide levels and a lack of oxygen supply relative to oxygen demands during exercise. Over time, the elevated respiratory rate past what is needed to restore normal blood pH levels following exercise causes a long-term increase in arterial oxygen levels.

Increased oxygen levels in the body are especially important to the long-term health of the brain and heart, two organs that are vital to sustain life and that require large amounts of oxygen to function well. Brain plasticity and cognition also improves as a result.

Exercise also has beneficial effects for reducing stress responses in the body due to increased endorphin production in the brain from exercise. In long-term exercise of appropriate intensity, the volume and strength of the heart are improved, which makes additional exercise easier.

When exercise is performed at too intense levels for too long or without adequate rest, it can cause long term, adverse health effects. Muscle tissue repair is impaired in those that exercise too frequently. Exercise induced asthma is another common complication from too much exercise.

Normally asthma is caused by an allergic response within the lungs, but exercise can induce a similar response from too much intake of dry and cold air during the increased respiratory rate from exercise. It is most common in those that do more cardiac-oriented exercise.

The air in the lungs is meant to be moistened and humidified before entering the lungs, but if it is not adequately treated in the upper airways, it can induce bronchospams in the brionchioles, which cause the wheezing and coughing that occurs during an asthma attacks. Asthma treatments (such as medicines from an inhaler) can help prevent exercise-induced asthma, though it is only a particular risk in those who already have allergic asthma, or who simply exercise at too much intensity for what their body is capable of handling.

Sudden cardiac death is notable for occurring in otherwise healthy and young athletes who train too much for long-distance running. While many factors that can lead to sudden cardiac death in athletes are genetic (such as inherited problems with heart rhythm or coronary artery blood supply), many of these deaths are caused by cardiac hypertrophy, in which the heart becomes too thick from damage and scarring from too-intense exercise over long periods of time.

Initially, hypertrophy improves blood flow due to increases in the strength of the heart, but it eventually leads to heart failure as the tissues become too thick to pump normally.

Athletes with genetic susceptibilities are more likely to experience sudden cardiac death as a response to their hypertrophied heart, which can contribute to development of a severe arrhythmia (such as ventricular fibrillation). Exercising at appropriate intensities significantly reduces the risk of sudden cardiac death, though those with genetic susceptibilities should take more caution. 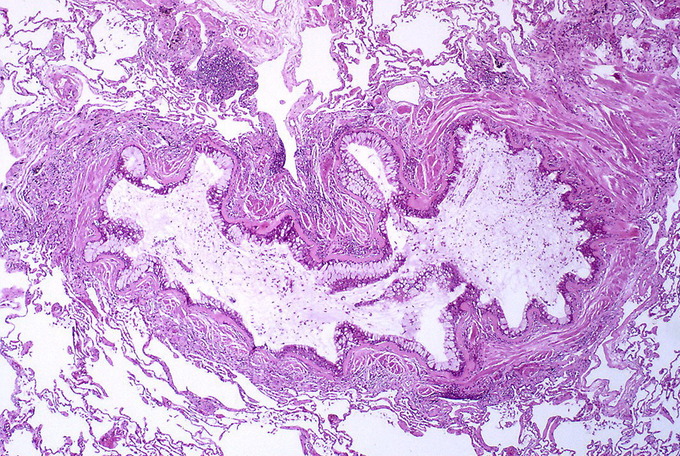 Asthma: Obstruction of the lumen of the bronchiole by mucoid exudate, goblet cell metaplasia, epithelial basement membrane thickening, and severe inflammation of bronchiole.

The human body can adapt to high altitude through immediate and long-term acclimatization processes.

The human body can adapt to high altitude through immediate and long-term acclimatization. At high altitude there is lower air pressure compared to a lower altitude or sea-level altitude.

Humans can survive at high altitudes with impaired short-term functions that eventually adjust in the long term. Some altitudes are too high for acclimatization to work, and can cause death if people stay there for too long.

At high altitude, in the short term, the lack of oxygen is sensed by the peripheral chemoreceptors, which causes an increase in breathing rate ( hyperventilation ). However, hyperventilation also causes the adverse effect of alkalosis due to increasing the rate by which carbon dioxide is removed from the body, which inhibits the respiratory center from enhancing the respiratory rate to meet the oxygen demands.

Additionally, the peripheral chemoreceptors cause sympathetic nervous system stimulation, which causes the heart rate to increase while stroke volume decreases, and digestion is impaired. Shortness of breath is common, and urination increases.

Along with alkalosis, these effects make up the symptoms of altitude sickness, which become worse during exercise at high altitudes (which involves more anaerobic respiration than at lower altitudes), but falls off during acclimatization.

Acclimatization to high altitude requires days, or even weeks. Gradually, the body compensates for the respiratory alkalosis by kidney excretion of bicarbonate, which allows adequate respiration to provide oxygen without risking alkalosis. It takes about four days at any given altitude, and can be enhanced by drugs such as acetazolamide (which decreases fluid retention).

Staying hydrated during acclimatization is important to minimize altitude sickness symptoms and to counteract increased urination. The heart rate and ventilation rate at rest both remain elevated despite the acclimatization, while heart rate at maximum activity level will be reduced.

The main difference brought about by acclimatization that explain why it makes high altitudes more comfortable for the body is increased levels of circulating red blood cells, which improve the carrying capacity of oxygen by hemoglobin in the body. This is an adaptive response due to erythropotein secretions in the kidneys (from lack of oxygen in the tissues ) that act on the liver to increase erythrocyte (red blood cell) production.

Blood volume decreases, which also increases the hematocrit, which is the concentration of hemoglobin in blood. This increase in red blood cells remains for a few weeks after one returns to lower altitude, so those who acclimatize to high altitude will experience improved athletic performance at lower altitudes. Capillary density and tissue perfusion also increase.

These physiological changes make high-altitude athletic training popular for athletes, such as Olympic athletes. Full hematological adaptation to high altitude is achieved when the increase of red blood cells reaches a plateau and stops.

The length of full hematological adaptation can be approximated by multiplying the altitude in kilometers by 11.4 days. For example, to adapt to 4,000 meters (13,000 ft.) of altitude would require 45.6 days.

The upper altitude limit of this linear relationship has not been fully established, in part because extremely high altitudes have such little oxygen content that they would be fatal regardless of acclimatization. 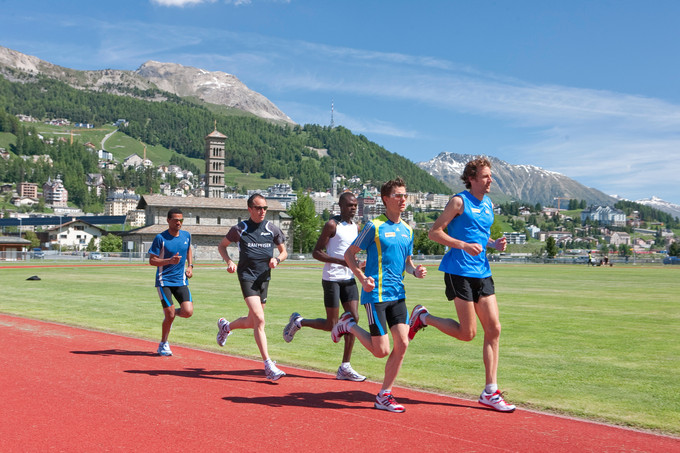 An athletic training camp in the Swiss Alps