Overview of the Spinal Nerves

Spinal nerves, a part of the peripheral nervous system (PNS), are mixed nerves that send motor, sensory, and autonomic signals between the CNS and the body.

The term spinal nerve generally refers to a mixed spinal nerve that carries motor, sensory, and autonomic signals between the spinal cord and the body.

A spinal nerve: Spinal nerves arise from a combination of nerve fibers from the dorsal and ventral roots of the spinal cord. 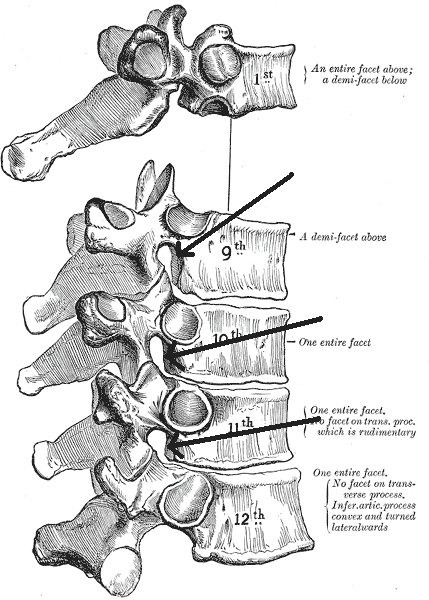 The spinal nerve emerges from the spinal column through an opening (intervertebral foramen) between adjacent vertebrae.

This is true for all spinal nerves except for the first spinal nerve pair, which emerges between the occipital bone and the atlas (the first vertebra). Thus the cervical nerves are numbered by the vertebra below, except C8, which exists below C7 and above T1.

The thoracic, lumbar, and sacral nerves are then numbered by the vertebra above. In the case of a lumbarized S1 vertebra (i.e., L6) or a sacralized L5 vertebra, the nerves are typically still counted to L5 and the next nerve is S1.

Outside the vertebral column, the nerve divides into branches. The dorsal ramus contains nerves that serve the dorsal portions of the trunk; it carries visceral motor, somatic motor, and somatic sensory information to and from the skin and muscles of the back (epaxial muscles).

The ventral ramus contains nerves that serve the remaining ventral parts of the trunk and the upper and lower limbs (hypaxial muscles); they carry visceral motor, somatic motor, and sensory information to and from the ventrolateral body surface, structures in the body wall, and the limbs.

The meningeal branches (recurrent meningeal or sinuvertebral nerves) branch from the spinal nerve and re-enter the intervertebral foramen to serve the ligaments, dura, blood vessels, intervertebral discs, facet joints, and periosteum of the vertebrae.

The rami communicantes contain autonomic nerves that serve visceral functions, such as carrying visceral motor and sensory information to and from the visceral organs.

A loop of nerves called ansa cervicalis is also part of the cervical plexus.

Thoracic nerve branches exit the spine and go directly to the paravertebral ganglia of the autonomic nervous system, where they are involved in the functions of organs and glands in the head, neck, thorax, and abdomen.

The intercostal nerves come from thoracic nerves T1–T11, and run between the ribs. The subcostal nerve comes from nerve T12, and runs below the twelfth rib.

The medial branches (ramus medialis) of the posterior branches of the upper six thoracic nerves run between the semispinalis dorsi and multifidus, which they supply.

They then pierce the rhomboid and trapezius muscles, and reach the skin by the sides of the spinous processes. This branch is called the medial cutaneous ramus.

The medial branches of the lower six thoracic nerves are distributed chiefly to the multifidus and longissimus dorsi, occasionally they give off filaments to the skin near the middle line. This sensitive branch is called the posterior cutaneous ramus.

The lumbar nerves are divided into posterior and anterior divisions.

The medial branches of the posterior divisions of the lumbar nerves run close to the articular processes of the vertebrae and end in the multifidus muscle. The lateral branches supply the erector spinae muscles.

The anterior divisions of the lumbar nerves (rami anteriores) consist of long, slender branches that accompany the lumbar arteries around the sides of the vertebral bodies, beneath the psoas major.

The first and second, and sometimes the third and fourth, lumbar nerves are each connected with the lumbar part of the sympathetic trunk by a white ramus communicans.

The nerves pass obliquely outward behind the psoas major, or between its fasciculi, distributing filaments to it and the quadratus lumborum.

The first three and the greater part of the fourth are connected by anastomotic loops and form the lumbar plexus.

The smaller part of the fourth joins with the fifth to form the lumbosacral trunk, which assists in the formation of the sacral plexus. The fourth nerve is named the furcal nerve, from the fact that it is subdivided between the two plexuses.

The sacral nerves have both afferent and efferent fibers, thus they are responsible for part of the sensory perception and the movements of the lower extremities of the human body.

The pudendal nerve and parasympathetic fibers arise from S2, S3, and S4. They supply the descending colon and rectum, urinary bladder, and genital organs. These pathways have both afferent and efferent fibers.

The coccygeal nerve is the 31st pair of spinal nerves and arises from the conus medullaris. Its anterior root helps form the coccygeal plexus.

Spinal nerve motor functions are summarized in the table below.

The spinal nerves branch into the dorsal ramus, ventral ramus, the meningeal branches, and the rami communicantes. 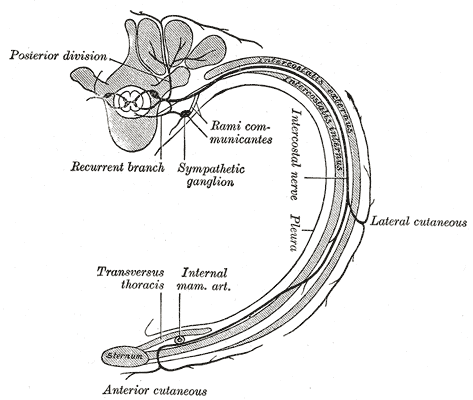 Outside the vertebral column, the spinal nerves divide into branches.

A nerve plexus is a network of intersecting nerves  that serve the same part of the body.

A nerve plexus is a network of intersecting nerves; multiple nerve plexuses exist in the body. Nerve plexuses are composed of afferent and efferent fibers that arise from the merging of the anterior rami of spinal nerves and blood vessels.

There are five spinal nerve plexuses—except in the thoracic region—as well as other forms of autonomic plexuses, many of which are a part of the enteric nervous system.

The cervical plexus is formed by the ventral rami of the upper four cervical nerves and the upper part of fifth cervical ventral ramus. The network of rami is located deep within the neck.

The brachial plexus is formed by the ventral rami of C5–C8 and the T1 spinal nerves, and lower and upper halves of the C4 and T2 spinal nerves. The plexus extends toward the armpit (axilla).

Lumbar Plexus—Serves the Back, Abdomen, Groin, Thighs, Knees, and Calves

The lumbar plexus is formed by the ventral rami of L1–L5 spinal nerves with a contribution of T12 form the lumbar plexus. This plexus lies within the psoas major muscle.

The sacral plexus is formed by the ventral rami of L4-S3, with parts of the L4 and S4 spinal nerves. It is located on the posterior wall of the pelvic cavity.

Coccygeal Plexus—Serves a Small Region over the Coccyx

The coccygeal plexus serves a small region over the coccyx and originates from S4, S5, and Co1 spinal nerves. It is interconnected with the lower part of sacral plexus. 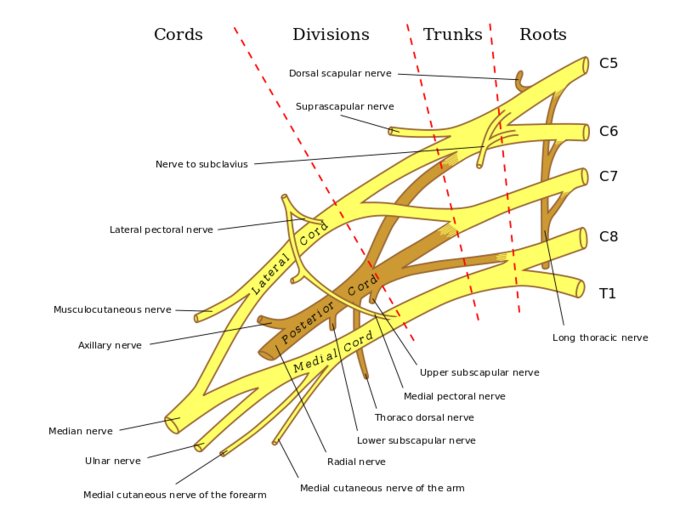 Brachial plexus: Cervical (C5–C8) and thoracic (T1) nerves comprise the brachial plexus, which is a nerve plexus that provides sensory and motor function to the shoulders and upper limbs.

The anterior divisions of the thoracic spinal nerves (T1–T11) are called the intercostal nerves.

Describe the function of intercostal nerves 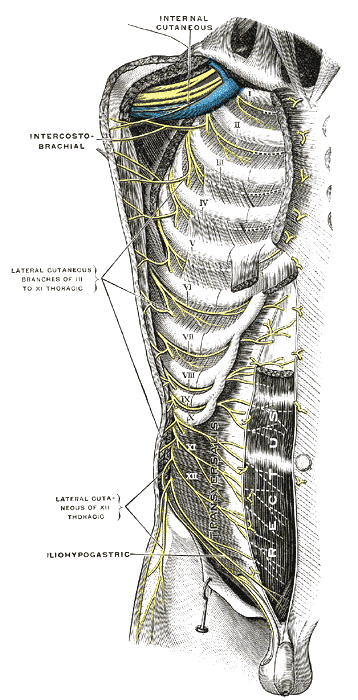 Intercostal nerves: An image of the intercostal brachial nerves.

They differ from the anterior divisions of the other spinal nerves in that each pursues an independent course without plexus formation.

The anterior division of the first thoracic nerve divides into two branches:

These are limited in their distribution to the parietes (wall) of the thorax. The anterior divisions of the second, third, fourth, fifth, and sixth thoracic nerves, and the small branch from the first thoracic, are confined to the walls of the thorax and are named thoracic intercostal nerves.

The branch from the second nerve unites with the anterior supraclavicular nerves of the cervical plexus.

The seventh intercostal nerve terminates at the xyphoid process, at the lower end of the sternum.

The tenth intercostal nerve terminates at the umbilicus.

The twelfth (subcostal) thoracic nerve is distributed to the abdominal wall and groin.

Unlike the nerves from the autonomic nervous system that innervate the visceral pleura of the thoracic cavity, the intercostal nerves arise from the somatic nervous system. This enables them to control the contraction of muscles, as well as provide specific sensory information regarding the skin and parietal pleura.

This explains why damage to the internal wall of the thoracic cavity can be felt as a sharp pain localized in the injured region. Damage to the visceral pleura is experienced as an unlocalized ache.

Describe dermatomes and how they relate to the peripheral nervous system

A dermatome is an area of skin that is supplied by a single spinal nerve. There are eight cervical nerves, twelve thoracic nerves, five lumbar nerves and five sacral nerves. Each of these nerves relays sensation, including pain, from a particular region of the skin to the brain.

Dermatomes: Dermatomes are areas of skin supplied by sensory neurons that arise from a spinal nerve ganglion. Dermatomes and the associated major cutaneous nerves are shown here in a ventral view.

Along the thorax and abdomen, the dermatomes are like a stack of discs, with each section supplied by a different spinal nerve. Along the arms and the legs, the pattern is different. The dermatomes run longitudinally along the limbs, so that each half of the limb has a different dermatome.

Although the general pattern is similar in all people, the precise areas of innervation are as unique to an individual as fingerprints.

Dermatomes have clinical significance, especially in the diagnosis of certain diseases. Symptoms that follow a dermatome, such as pain or a rash, may indicate a pathology that involves the related nerve root. Examples include dysfunction of the spine or a viral infection.

Viruses that remain dormant in nerve ganglia, such as the varicella zoster virus that causes both chickenpox and shingles, often cause either pain, rash, or both in a pattern defined by a dermatome. 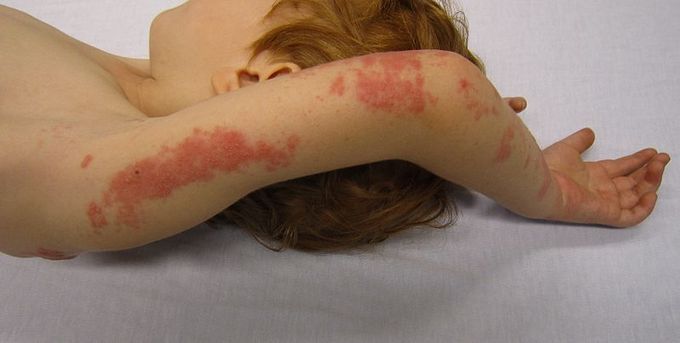 Shingles rash: The shingles rash appears across a dermatome. In this patient, one of the dermatomes in the arm is affected, restricting the rash to the length of the back of the arm.

Shingles is one of the only diseases that causes a rash in a dermatomal pattern, and as such, this is its defining symptom. The rash of shingles is almost always restricted to a specific dermatome, such as on the chest, leg, or arm caused by the residual varicella zoster virus infection of the nerve that supplies that area of skin. Shingles typically appears years or decades after recovery from chickenpox.

The myotome distributions of the upper and lower extremities are listed below:

The testing of myotomes provides the clinician with information about the level in the spine where a lesion may be present. During testing, the clinician looks for muscle weakness of a particular group of muscles. Results may indicate lesions to the spinal cord nerve root, or intervertebral disc herniation that presses on the spinal nerve roots.

Function and Physiology of the Spinal Nerves

Spinal nerves connect the brain and spinal cord to the limbs and organs of the body.

Describe the function and physiology of the spinal nerves

Unlike the CNS, the PNS is not protected by the bones of the spine and skull, or by the blood –brain barrier, leaving it exposed to toxins and mechanical injuries. The peripheral nervous system is divided into the somatic nervous system and the autonomic nervous system.

The peripheral nervous system includes 12 cranial nerves and 31 pairs of spinal nerves that provide communication from the CNS to the rest of the body by nerve impulses to regulate the functions of the human body. The term spinal nerve generally refers to a mixed spinal nerve, which carries motor, sensory, and autonomic signals between the spinal cord and the body.

The anterior divisions of the lumbar, sacral, and coccygeal nerves form the lumbosacral plexus, the first lumbar nerve being frequently joined by a branch from the twelfth thoracic. For descriptive purposes, this plexus is usually divided into three parts: lumbar plexus, sacral plexus, and pudendal plexus.

Some typical actions of the sympathetic and parasympathetic systems are listed below. 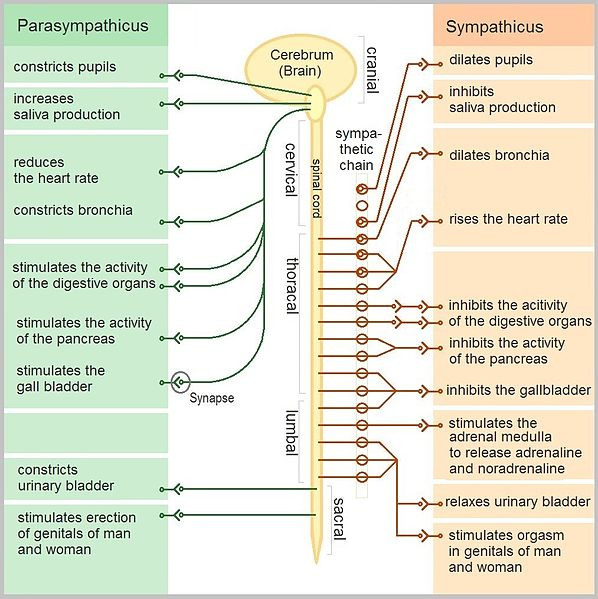