The Link Between Genotype and Phenotype

The Process and Purpose of Gene Expression Regulation

Gene expression is a highly complex, regulated process that begins with DNA transcribed into RNA, which is then translated into protein.

Each somatic cell in the body generally contains the same DNA. A few exceptions include red blood cells, which contain no DNA in their mature state, and some immune system cells that rearrange their DNA while producing antibodies. In general, however, the genes that determine whether you have green eyes, brown hair, and how fast you metabolize food are the same in the cells in your eyes and your liver, even though these organs function quite differently. If each cell has the same DNA, how is it that cells or organs are different? Why do cells in the eye differ so dramatically from cells in the liver ?

Gene Expression: The genetic content of each somatic cell in an organism is the same, but not all genes are expressed in every cell. The control of which genes are expressed dictates whether a cell is (a) an eye cell or (b) a liver cell. It is the differential gene expression patterns that arise in different cells that give rise to (c) a complete organism.

Whereas each cell shares the same genome and DNA sequence, each cell does not turn on, or express, the same set of genes. Each cell type needs a different set of proteins to perform its function. Therefore, only a small subset of proteins is expressed in a cell that constitutes its proteome. For the proteins to be expressed, the DNA must be transcribed into RNA and the RNA must be translated into protein. In a given cell type, not all genes encoded in the DNA are transcribed into RNA or translated into protein because specific cells in our body have specific functions. Specialized proteins that make up the eye (iris, lens, and cornea) are only expressed in the eye, whereas the specialized proteins in the heart (pacemaker cells, heart muscle, and valves) are only expressed in the heart. At any given time, only a subset of all of the genes encoded by our DNA are expressed and translated into proteins. The expression of specific genes is a highly-regulated process with many levels and stages of control. This complexity ensures the proper expression in the proper cell at the proper time.

The Chromosomal Theory of Inheritance identified chromosomes as the genetic material responsible for Mendelian inheritance.

The speculation that chromosomes might be the key to understanding heredity led several scientists to examine Mendel’s publications and re-evaluate his model in terms of the behavior of chromosomes during mitosis and meiosis. In 1902, Theodor Boveri observed that proper embryonic development of sea urchins does not occur unless chromosomes are present. That same year, Walter Sutton observed the separation of chromosomes into daughter cells during meiosis. Together, these observations led to the development of the Chromosomal Theory of Inheritance, which identified chromosomes as the genetic material responsible for Mendelian inheritance. 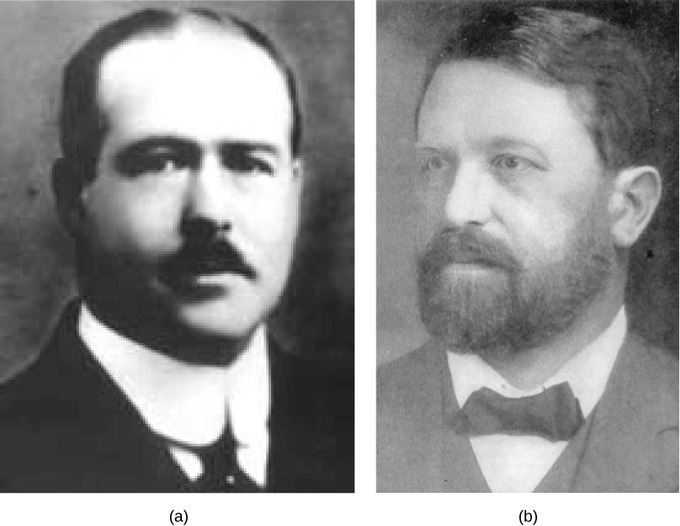 Sutton and Boveri: (a) Walter Sutton and (b) Theodor Boveri are credited with developing the Chromosomal Theory of Inheritance, which states that chromosomes carry the unit of heredity (genes).

The Chromosomal Theory of Inheritance was consistent with Mendel’s laws and was supported by the following observations:

Despite compelling correlations between the behavior of chromosomes during meiosis and Mendel’s abstract laws, the Chromosomal Theory of Inheritance was proposed long before there was any direct evidence that traits were carried on chromosomes. Critics pointed out that individuals had far more independently segregating traits than they had chromosomes. It was only after several years of carrying out crosses with the fruit fly, Drosophila melanogaster, that Thomas Hunt Morgan provided experimental evidence to support the Chromosomal Theory of Inheritance.

In 1910, Thomas Hunt Morgan started his work with Drosophila melanogaster, a fruit fly. He chose fruit flies because they can be cultured easily, are present in large numbers, have a short generation time, and have only four pair of chromosomes that can be easily identified under the microscope. They have three pair of autosomes and a pair of sex chromosomes. At that time, he already knew that X and Y have to do with gender. He used normal flies with red eyes and mutated flies with white eyes and cross bred them. In flies, the wild type eye color is red (XW) and is dominant to white eye color (Xw). He was able to conclude that the gene for eye color was on the X chromosome. This trait was thus determined to be X-linked and was the first X-linked trait to be identified. Males are said to be hemizygous, in that they have only one allele for any X-linked characteristic. 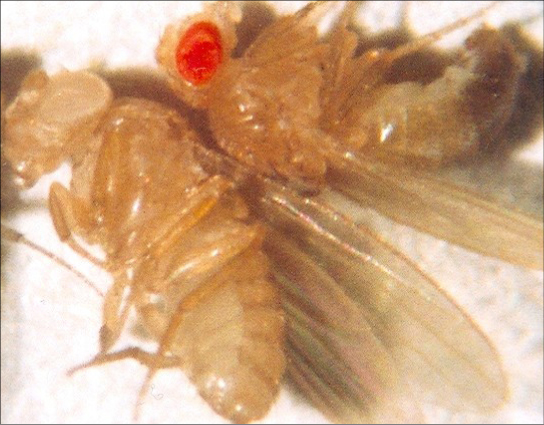 Eye Color in Fruit Flies: In Drosophila, the gene for eye color is located on the X chromosome. Red eye color is wild type and is dominant to white eye color.