General Features and Functions of the Skull

The human skull is the part of the skeleton that supports the structures of the face and forms a cavity for the brain.

Describe the parts of the skull

The skull supports the musculature and structures of the face and forms a protective cavity for the brain. The skull is formed of several bones which, with the exception of the mandible, are joined together by sutures—synarthrodial (immovable) joints.

Composition of the Skull

The adult human skull is comprised of twenty-two bones which are divided into two parts of differing embryological origin: the neurocranium and the viscerocranium.

The neurocranium forms the cranial cavity that surrounds and protects the brain and brainstem. The neurocranium is formed from the occipital bone, two temporal bones, two parietal bones, the sphenoid, ethmoid and frontal bones; they are all joined together with sutures. 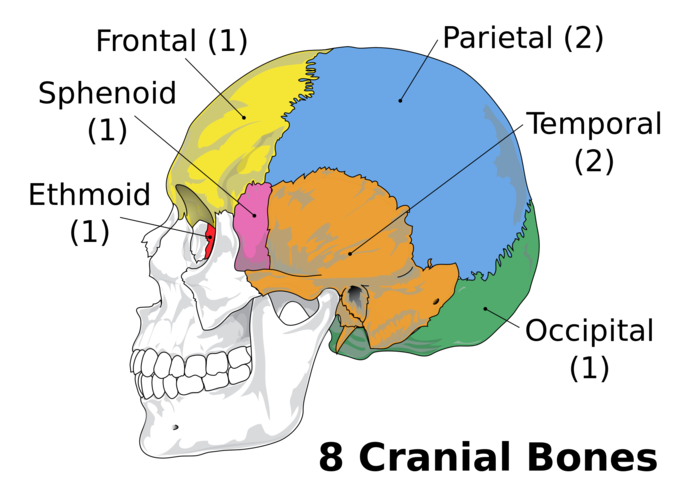 The viscerocranium bones form the anterior and lower regions of the skull and include the mandible, which attaches through the only truly motile joint found in the skull. The facial skeleton contains the vomer, two nasal conchae, two nasal bones, two maxilla, the mandible, two palatine bones, two zygomatic bones, and two lacrimal bones. 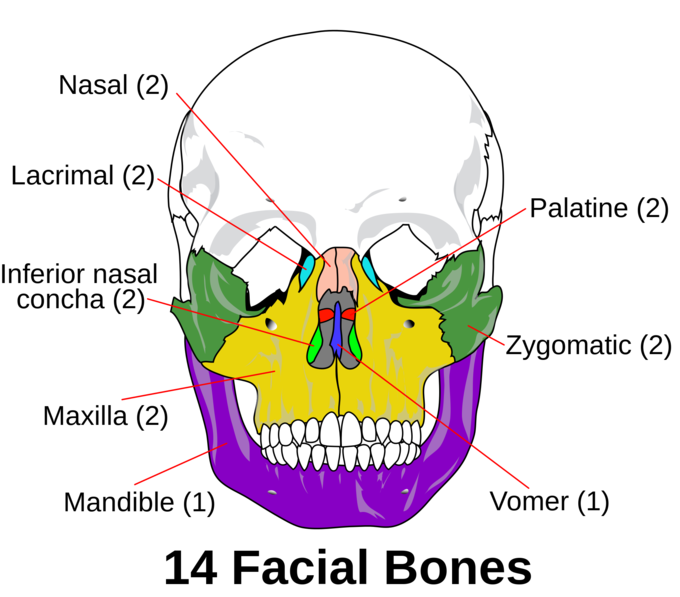 Components of viscerocranium : The face is made of 2 nasal, 2 lacrimal, 2 palantine, 2 inferior nasal concha, 2 zygomatic, 2 maxilla, 1 mandible, and 1 vomer.

The skull also contains the sinuses. These are air-filled cavities that contribute to lessening the weight of the skull with a minimal reduction in strength. They contribute to resonance of the voice and assist in the warming and moistening of air inhaled via the nose.

Differentiate the bones of the neurocranium

The neurocranium forms the cranial cavity that surrounds and protects the brain and brainstem. The neurocranium consists of the occipital bone, two temporal bones, two parietal bones, the sphenoid, ethmoid, and frontal bones—all are joined together with sutures.

Neurocranium: A lateral view showing the bones that structure the neurocranium.

The occipital bone forms the base of the skull at the rear of the cranium. It articulates with the first vertebra of the spinal cord and also contains the foramen magnum, the large opening of the skill through which the spinal cord passes as it enters the vertebral column. The occipital bone borders the parietal bones through the heavily serrated lambdoidal suture, and also the temporal bones through occipitomastoid suture.

There are two processes that originate from the temporal bone:

The temporal bones have four borders:

The two large parietal bones are connected and make up part of the roof and sides of the human skull. The two bones articulate to form the sagittal suture. In the front, the parietal bones form the coronal suture with the frontal bone, and in the rear, the lambdoid suture is formed by the occipital bone. Finally, the squamosal suture separates the parietal and temporal bones.

The sphenoid bone is situated in the middle of the skull towards the front and forms the rear of the orbit. It has been described as resembling a butterfly due to its wing-like processes. The sphenoid bone is divided into several parts: the body of the bone, two greater wings, two lesser wings, and the pterygoid processes.

The sphenoid bone is one of the most complex in the body due to its interactions with numerous facial bones, ligaments, and muscles. The body that forms the middle of the sphenoid bone articulates with the ethmoid and occipital bone and forms a key part of the nasal cavity; it also contains the sphenoidal sinuses.

The ethmoid bone is a small bone in the skull that separates the nasal cavity from the brain. It is lightweight due to its spongy, air-filled construction and is located at the roof of the nose and between the two orbits.

The frontal bone forms the front of the skull and is divided into three parts:

The frontal bone borders two other neurocranial bones—the parietal bones through the coronal sutures and the sphenoid bone through the sphenofrontal suture. It also articulates with the zygomatic and nasal bones and the maxilla.

The two zygomatic bones form the cheeks and contribute to the orbits. They articulate with the frontal, temporal, maxilla, and sphenoid bones.

The two lacrimal bones form the medial wall of the orbit and articulate with the frontal, ethmoid, maxilla, and inferior nasal conchae. The lacrimal bones are the two smallest bones located in the face.

The two slender nasal bones located in the midline of the face fuse to form the bridge of the noise and also articulate with the frontal, ethmoid and maxilla bones. The inferior nasal conchae are located within the nasal cavity. They are spongy and curled in shape; their primary function is to increase the surface area of the nasal cavity, which also increases the amount of air that contacts the mucous membranes and cilia of the nose, thus filtering, warming, and humidifying the air before it enters the lungs. At the base of the nasal cavity is the small vomer bone which forms the nasal septum.

The maxilla bones fuse in the midline and form the upper jaw. They provide the bed for the upper teeth, the floor of the nose, and the base of the orbits. The maxilla articulates with the zygomatic, nasal, lacrimal, and palatine bones.

The palatine bones fuse in the midline to form the palatine, located at the back of the nasal cavity that forms the roof of the mouth and the floor of the orbit. 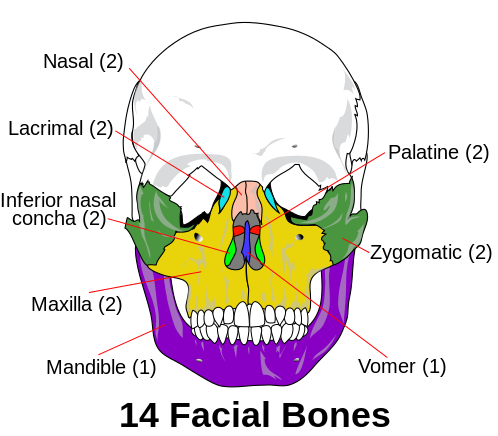 Facial bones: There are fourteen facial bones. Some, like the lacrimal and nasal bones, are paired. Others, like the mandible and vomer, are singular.

The orbit is the cavity or socket of the skull in which the eye and its appendages are situated.

Locate the orbits in the skull

The orbit, or eye socket, is the cavity located in the skull in which the eye and its associated appendages are housed. The orbits are conical, sometimes described as four-sided pyramidal, cavities that open in the midline of the face and point backwards. To the rear of the orbit, the optic foramen opens into the optical canal through which the optic nerve and ophthalmic artery pass.

The primary functions of the orbit include protection of its delicate contents and, through muscle attachment and a smooth coating fascia, to  also promote the smooth, delicate movements of the eye.

Structure of the Orbit

Finally, the sphenoid bone forms the posterior wall of the orbit and also contributes to the formation of the optic canal.

The human skull has numerous holes known as foramina through which cranial nerves, arteries, veins, and other structures pass.

Describe the purpose of foramina in the skull 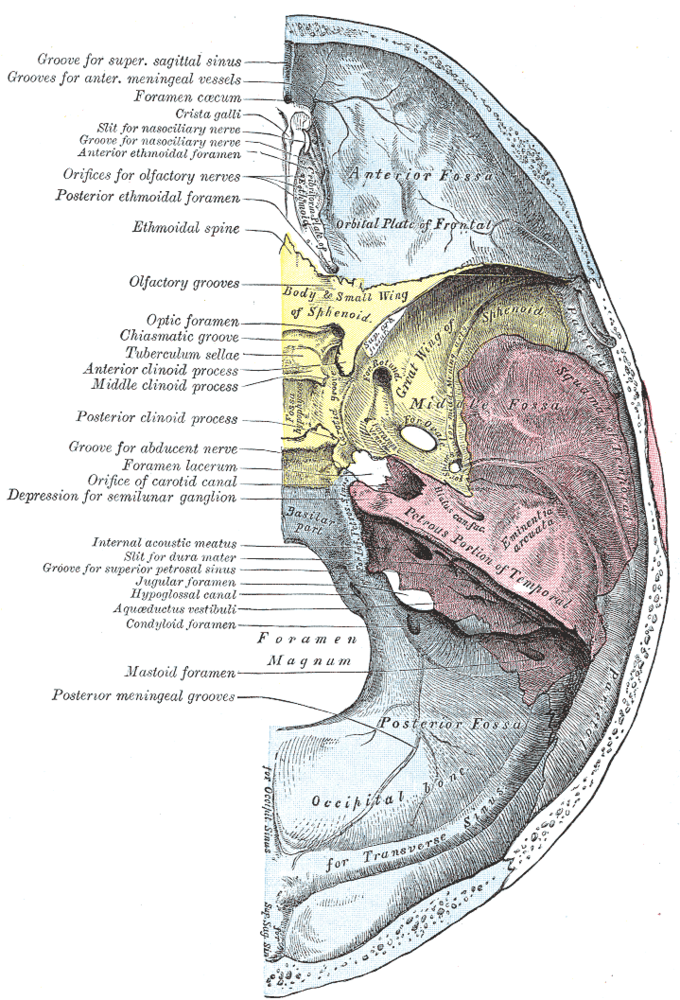 In anatomy, a foramen is any opening. Foramina inside the body of humans and other animals typically allow muscles, nerves, arteries, veins, or other structures to connect one part of the body with another.

The human skull has numerous foramina through which cranial nerves, arteries, veins, and other structures pass. The skull bones that contain foramina include the frontal, ethmoid, sphenoid, maxilla, palatine, temporal, and occipital lobes.

Key foramina in the skull include:

A suture is a type of fibrous joint (or synarthrosis) that only occurs in the skull (or cranium).

A suture is a type of fibrous joint (or synarthrosis) that only occurs in the skull. The bones are bound together by Sharpey’s fibers, a matrix of connective tissue which provide a firm joint.

A small amount of movement is permitted through these sutures that contributes to the compliance and elasticity of the skull. The joint between the mandible and the cranium, known as the temporomandibular joint, forms the only non-sutured joint in the skull. Most sutures are named for the bones that they articulate.

At birth, many of the bones of the skull remain unfused to the soft spots described as fontanelle. The bones fuse relatively rapidly through a process known as craniosynotosis, although the relative positions of the bones can continue to change through life. In old age the cranial sutures may ossify completely, reducing the amount of elasticity present in the skull. As such, the degree of ossification can be a useful tool in determining age postmortem.

Sutures primarily visible from the side include:

Sutures primarily visible from front or above include:

Sutures primarily visible from below or inside include:

The paranasal sinuses (four, paired, air-filled spaces) surround the nasal cavity, and are located above and between the eyes, and behind the ethmoids.

Describe the structure and function of the paranasal sinuses

Structure of the Paranasal Sinuses

Skull Sinuses: This image shows the position of the sinuses in the human skull.

The paranasal sinuses form developmentally through excavation of bone by air-filled sacs (pneumatic diverticula) from the nasal cavity. This process begins prenatally and continues through the course of an individual’s lifetime.

Function of the Paranasal Sinuses

The biological role of the sinuses is debated, but a number of possible functions have been proposed. These include:

A fontanelle is an anatomical feature on an infant’s skull that allows its plates to be flexible to pass through the birth canal. 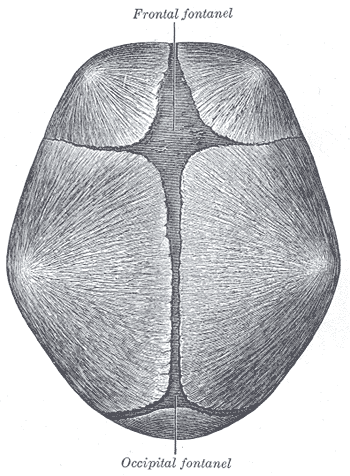 Superior view of infant skull: This image shows the location of the anterior (frontal) and posterior fontanelles.

Fontanelles are soft spots on a baby’s head that, during birth, enable the bony plates of the skull to flex and allow the child’s head to pass through the birth canal. The ossification of the bones of the skull causes the fontanelles to close over a period of 18 to 24 months; they eventually form the sutures of the neurocranium.

The cranium of a newborn consists of five main bones: two frontal bones, two parietal bones, and one occipital bone. These are joined by fibrous sutures that allow movement that facilitates childbirth and brain growth.

At birth, the skull features a small posterior fontanelle (an open area covered by a tough membrane) where the two parietal bones adjoin the occipital bone (at the lambda). This fontanelle usually closes during the first two to three months of an infant’s life. This is called intramembranous ossification. The mesenchymal connective tissue turns into bone tissue. 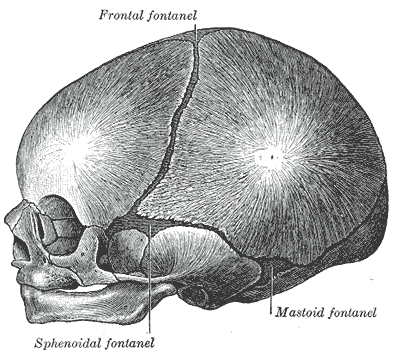 Lateral view of infant skull: This image show the location of the sphenoidal and mastoid fontanelles.

The fontanelle may pulsate. Although the precise cause of this is not known, it is perfectly normal and seems to echo the heartbeat, perhaps via the arterial pulse within the brain vasculature, or in the meninges. This pulsating action is how the soft spot got its name: fontanelle means little fountain.

Parents may worry that their infant may be more prone to injury at the fontanelles. In fact, although they may colloquially be called soft spots, the membrane covering the fontanelles is extremely tough and difficult to penetrate.

The fontanelles allow the infant brain to be imaged using ultrasonography. Once they are closed, most of the brain is inaccessible to ultrasound imaging because the bony skull presents an acoustic barrier.