The bone forming the upper arm is the humerus.

Describe the anatomy of the humerus 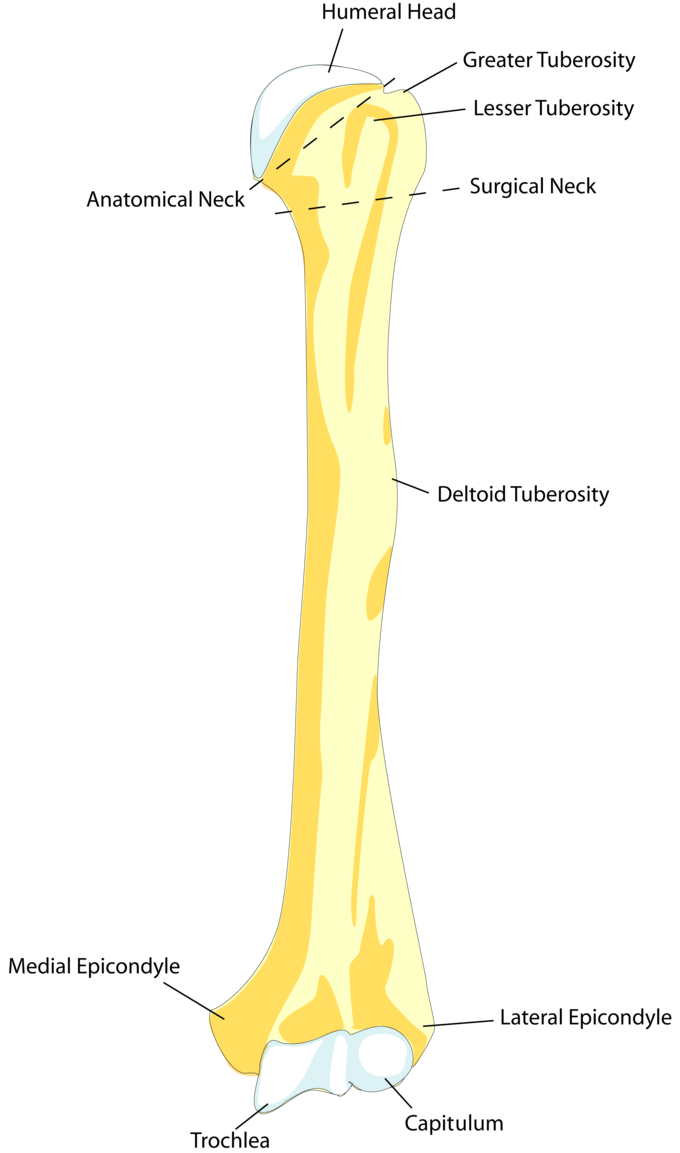 Humerus: The humerus attaches proximally to the scapula (shoulderblade) at the humeral head and distally with the radius and ulna (lower-arm bones) at the trochlea and capitulum, respectively.

The proximal portion of the humerus can be divided into three parts.

The four rotator cuff muscles attach to these tubercles, strengthening and maintaining the shoulder joint. Between the two tubercles lies a deep grove called the intertubercular sulcus, through which the tendon of the long head of the biceps brachii runs.

Below this proximal region lies the shaft, which is separated from the proximal region by the surgical neck, so termed as this in an area of frequent fracture. A major feature of the shaft is the deltoid tuberosity located laterally to which the deltoid muscle attaches.

The deltoid, corocobrachialis, brachialis, and brachioradialis muscles attach to the anterior surface, with the triceps brachii attaching to the posterior.

Several muscles of the forearm responsible for extension at the wrist attach to the humerus immediately above the capitulum and trochlea.

Ulna and Radius (The Forearm)

The forearm contains two bones, the radius and the ulna.

Discuss the radius and ulna 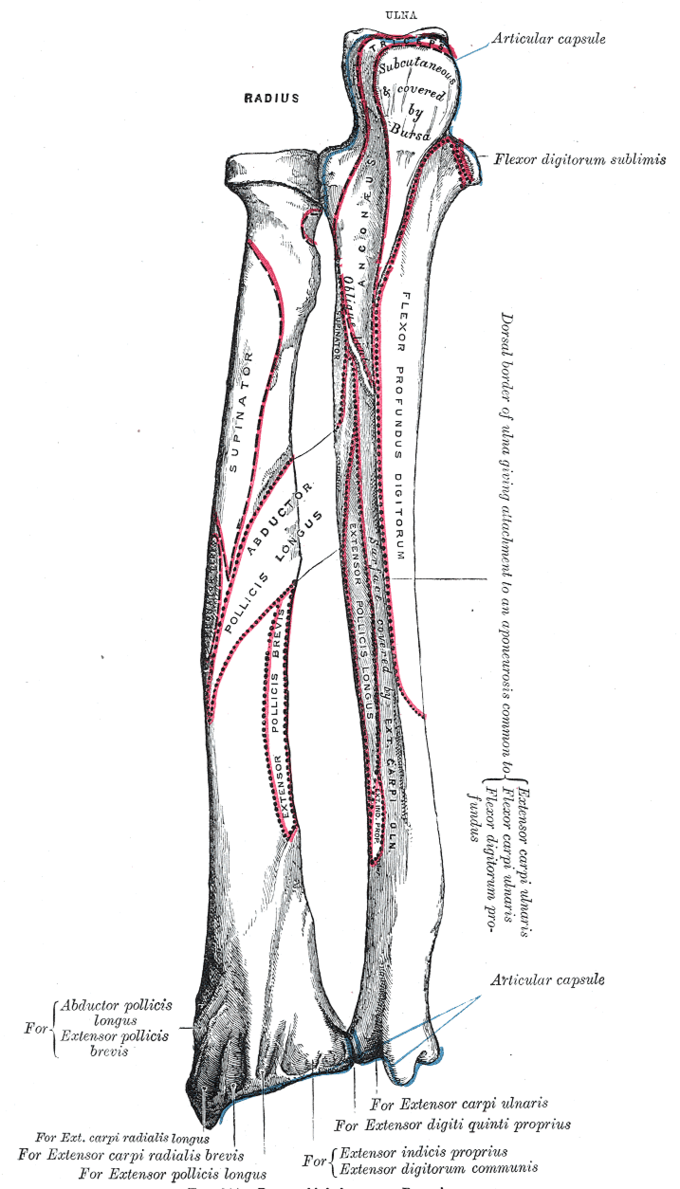 The forearm: The radius and ulna are the bones of the forearm.

Anatomically, the ulna is located medially to the radius, placing it near the little finger. The ulna is slightly larger than the radius.

Proximally, there are five key regions of the ulna:

The shaft of the ulna is triangular and numerus muscles involved in pronation and flexion of the forearm attach to its surface.

Distally, the ulna is much smaller and terminates with a rounded head that articulates with the ulnar notch of the radius to form the distal radioulnar joint. The styloid process of the ulna extends distally and is the site of attachment for ligaments found in the wrist.

Anatomically, the radius is located laterally to the ulna placing it near the thumb. The radius is slightly smaller than the ulna and pivots around the ulna to produce movement at the proximal and distal radioulnar joints.

Proximally, the radius terminates with a disk-shaped head that articulates with the capitulum of the humerus and the radial notch of the ulna. Immediately below the head lies the radial tuberosity to which the biceps brachii attaches. As with the ulna, the shaft of the radius is triangular in shape and numerous muscles, including the protonator teres, attach to it.

Carpals, Metacarpals, and Phalanges (The Hand)

Each hand consists of 27 bones, divided between the wrist bones (carpals), the palm bones (metacarpals), and the finger bones (phalanges).

Describe the types of bones in the hand

Carpals of the left hand: There are eight carpal bones in each wrist: scaphoid, lunate, triquetral, pisiform, trapezium, trapezoid, capitate, and hamate.

The hand contains 27 bones. Each one belongs to one of three regions: the carpals, (wrist), the metacarpals, (the palm), and the phalanges (the digits).

The eight, irregularly shaped carpals are the most proximal bones of the hand. The carpals are often split into two rows, the proximal row containing the scaphoid, lunate, triquetrum, and pisiform, moving lateral to medial. 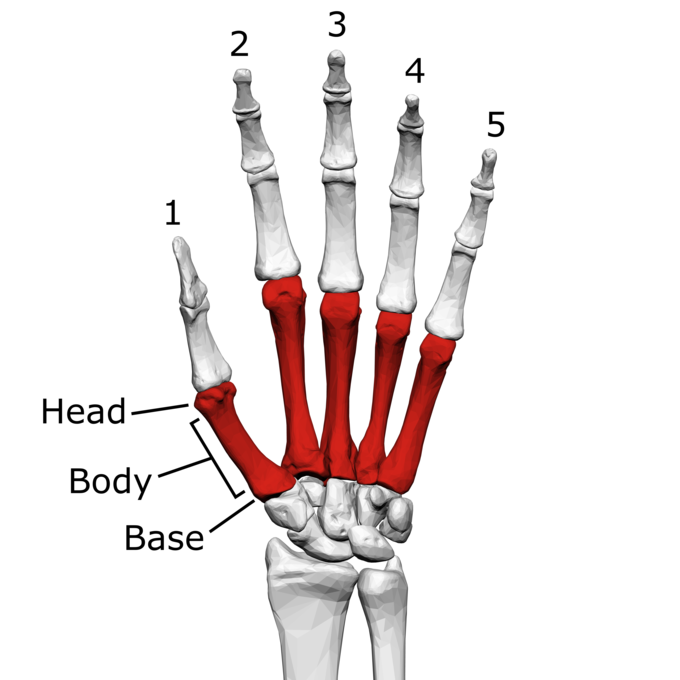 The hand contains five metacarpal bones that articulate proximally with the carpals and distally with the proximal phalanges. They are numbered moving lateral to medial, and start with the thumb, which is metacarpal I, and end with metacarpal V, the little finger.

Each metacarpal consists of a base, shaft, and head, with the concave lateral and medial borders of the shaft allowing attachment of the interossei muscles.

The digits are named in a similar fashion to the metacarpals, moving lateral to medial, and starting at the thumb. With the exception of the thumb, each digit contains a proximal, intermediate, and distal phalange; the thumb lacks an intermediate phalange. The length of the phalanges decreases distally. 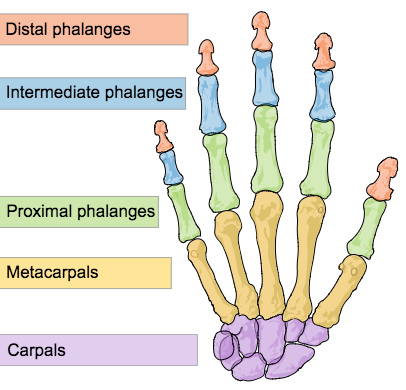 Human hand bones: Fingers are made up of proximal, intermediate, and distal phalanges. The thumb lacks an intermediate phalange.