Gastrulation is a phase early in the embryonic development of most animals during which the single-layered blastula is reorganized into a trilaminar (three-layered) structure known as the gastrula. These three germ layers are known as the ectoderm, mesoderm, and endoderm.

Gastrulation: Formation of the three primary germ layers occurs during the first two weeks of development. The embryo at this stage is only a few millimeters in length.

Gastrulation takes place after cleavage and the formation of the blastula and the primitive streak. It is followed by organogenesis, when individual organs develop within the newly-formed germ layers. Each layer gives rise to specific tissues and organs in the developing embryo.

In amniotes such as humans, gastrulation occurs in the following sequence:

The ectoderm gives rise to the epidermis, and also to the neural crest and other tissues that will later form the nervous system. The mesoderm is found between the ectoderm and the endoderm, giving rise to somites.

The somites form muscle, the cartilage of the ribs and vertebrae, the dermis, the notochord, blood and blood vessels, bone, and connective tissue.

The endoderm gives rise to the epithelium of the digestive and respiratory systems, and the organs associated with the digestive system, such as the liver and pancreas. Following gastrulation, the cells in the body are either organized into sheets of connected cells (as in epithelia), or as a mesh of isolated cells, such as mesenchyme.

Although gastrulation patterns exhibit enormous variation throughout the animal kingdom, they are unified by the five basic types of cell movements that occur during gastrulation:

Following gastrulation, the neurulation process develops the neural tube in the ectoderm, above the notochord of the mesoderm.

Outline the process of neurulation

In a simplified way, it can be said that the ectoderm gives rise to skin and the nervous system, the endoderm to the intestinal organs, and the mesoderm to the rest of the organs.

After gastrulation, the notochord—a flexible, rod-shaped body that runs along the back of the embryo—is formed from the mesoderm. During the third week of gestation the notochord sends signals to the overlying ectoderm, inducing it to become neuroectoderm.

This results in a strip of neuronal stem cells that runs along the back of the fetus. This strip is called the neural plate, and it is the origin of the entire nervous system.

The neural plate folds outwards to form the neural groove. Beginning in the future neck region, the neural folds of this groove close to create the neural tube (this form of neurulation is called primary neurulation). 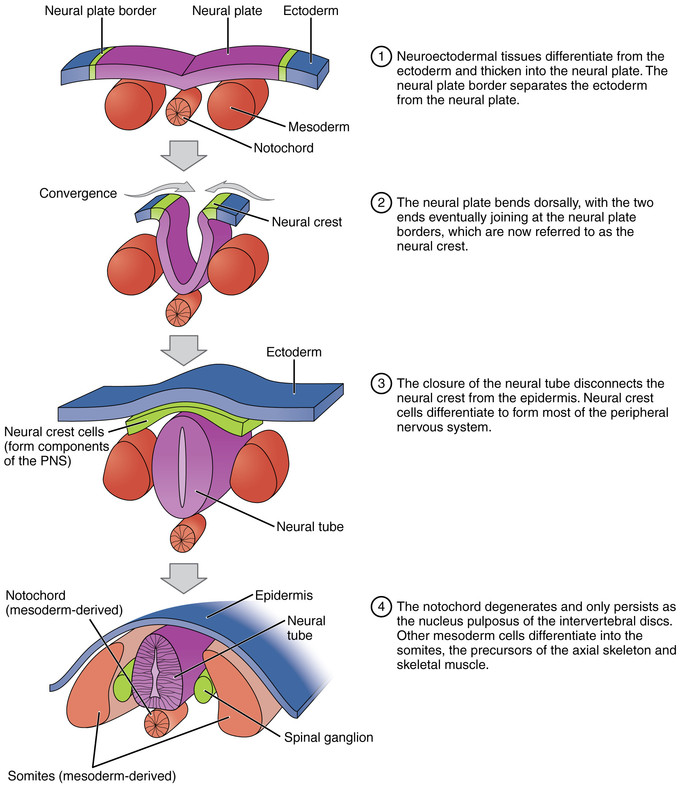 Neurulation: Transverse sections that show the progression of the neural plate into the neural tube.

Secondary neurulation of vertebrates occurs when primary neurulation terminates. It is the process by which the neural tube at the lower levels and the caudal to the mid-sacral region is formed.

In general, it entails the cells of the neural plate forming a cord-like structure that migrates inside the embryo and hollows to form the tube. Each organism uses primary and secondary neurulation to varying degrees (except fish, which use only secondary neurulation).

Spina bifida is a developmental congenital disorder caused by the incomplete closing of the neural tube during neurulation. 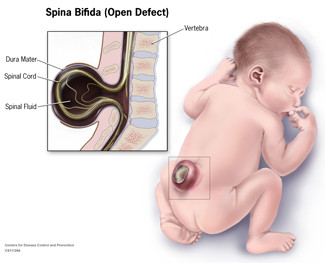 Spina bifida: An illustration of a child with spina bifida

Somites develop from the paraxial mesoderm and participate in the facilitation of multiple developmental processes.

Describe the functions of somites

In the development of the human embryo the intraembryonic coelom (or somatic coelom) is a portion of the conceptus that forms in the mesoderm. During the second week of development the lateral mesoderm splits into a dorsal somatic mesoderm (somatopleure) and a ventral splanchnic mesoderm (splanchnopleure).

By the third week of development, this process gives rise to a cavity between the somatopleure and splanchnopleure referred to as the intraembryonic celom. This space later gives rise to both the thoracic and abdominal cavities.

In the developing vertebrate embryo, somites are masses of mesoderm that can be found distributed along the two sides of the neural tube. They will eventually become dermis (dermatome), skeletal muscle (myotome), vertebrae (sclerotome), and tendons and cartilage (syndetome). 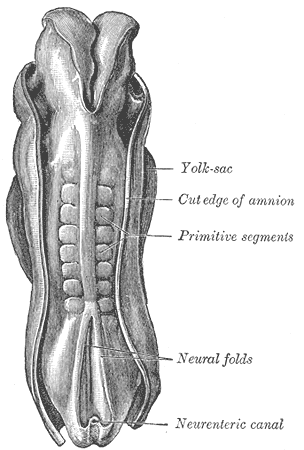 Somites: A dorsal view of a human embryo. The repetitive somites are marked with the older term primitive segments.

As the primitive streak regresses and the neural folds gather preceding the formation of the neural tube, the paraxial mesoderm divides into blocks called somites. Somites play a critical role in early development by participating in the specification of the migration paths of neural crest cells and spinal nerve axons.

The dermatome is the dorsal portion of the paraxial mesoderm somite. In the human embryo it arises in the third week of embryogenesis.

The dermatomes contribute to the skin, fat, and connective tissue of the neck and of the trunk, though most of the skin is derived from the lateral plate mesoderm.

The myotome is that part of a somite that forms the muscles. Each myotome divides into an epaxial part (epimere), at the back, and a hypaxial part (hypomere) at the front.

The myoblasts from the hypaxial division form the muscles of the thoracic and anterior abdominal walls. The epaxial muscle mass loses its segmental character to form the extensor muscles of the neck and trunk of mammals.

The sclerotome forms the vertebrae and the rib cartilage and part of the occipital bone. It forms the musculature of the back, the ribs, and the limbs.

The syndetome forms the tendons and some blood vessels.

Development of the Cardiovascular System

The circulatory system develops initially via vasculogenesis, with the arterial and venous systems developing from distinct embryonic areas.

Outline the development of the cardiovascular system

The human arterial system originates from the aortic arches and from the dorsal aortae starting from week 4 of embryonic life.
The development of the circulatory system initially occurs by the process of vasculogenesis, the formation of new blood vessels when there are no preexisting ones. 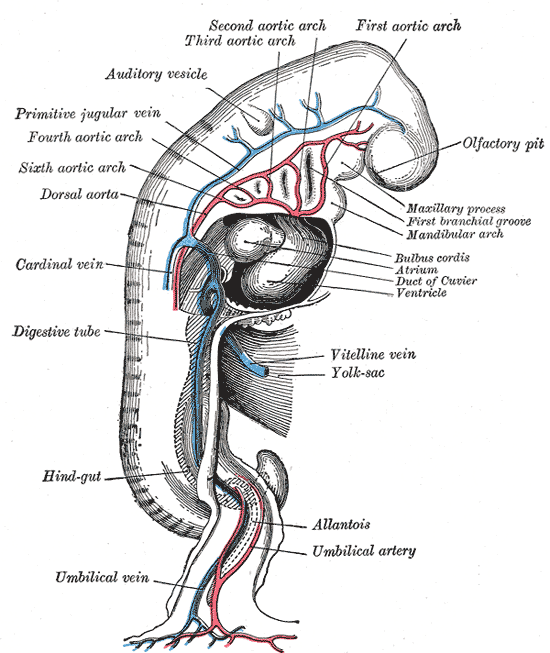 Vasculogenesis is when endothelial precursor cells (angioblasts) migrate and differentiate in response to local cues (such as growth factors and extracellular matrix) to form new blood vessels. The human arterial and venous systems develop from different embryonic areas.

The aortic arches—or pharyngeal arch arteries—are a series of six, paired, embryological vascular structures that give rise to several major arteries. They are ventral to the dorsal aorta and arise from the aortic sac. 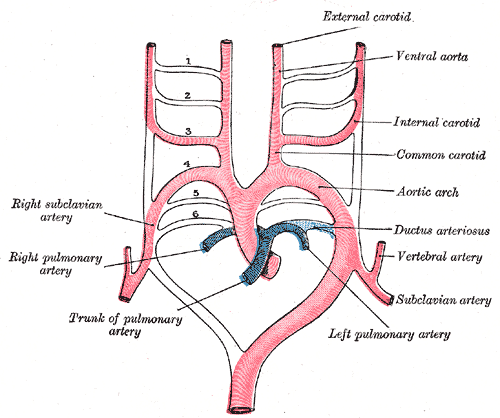 Aortic arches: A schematic of the aortic arches and their arterial destinations.

The first and second arches disappear early, but the dorsal end of the second gives origin to the stapedial artery, a vessel that atrophies in humans, but persists in some mammals. It passes through the ring of the stapes and divides into supraorbital, infraorbital, and mandibular branches that follow the three divisions of the trigeminal nerve.

This duct remains during fetal life, but closes within the first few days after birth due to increased O2 concentration. This causes the production of bradykinin which causes the ductus to constrict, occluding all flow. Within one to three months, the ductus is obliterated and becomes the ligamentum arteriosum.

The dorsal aortae are initially bilateral and then fuse to form the definitive dorsal aorta. Approximately 30 posterolateral branches arise off the aorta and will form the intercostal arteries, upper and lower extremity arteries, lumbar arteries, and the lateral sacral arteries.

The vitelline arteries form the celiac, and superior and inferior mesenteric arteries of the gastrointestinal tract. After birth, the umbilical arteries will form the internal iliac arteries.

The human venous system develops mainly from the vitelline, umbilical, and cardinal veins, all of which empty into the sinus venosus. The venous system arises during the fourth to eighth weeks of human development.

A double aortic arch occurs with the development of an abnormal right aortic arch, in addition to the left aortic arch, forming a vascular ring around the trachea and esophagus, which usually causes difficulty breathing and swallowing.

Occasionally, the entire right dorsal aorta abnormally persists and the left dorsal aorta regresses. In this case, the right aorta will have to arch across from the esophagus, causing difficulty breathing or swallowing.

In the placenta, chorionic villi develop to maximize surface-area contact with the maternal blood for nutrient and gas exchange.

Summarize the development of the chorionic villi and placenta

Chorionic villi sprout from the chorion after their rapid proliferation in order to give a maximum area of contact with the maternal blood. These villi invade and destroy the uterine decidua while at the same time they absorb nutritive materials from it to support the growth of the embryo. 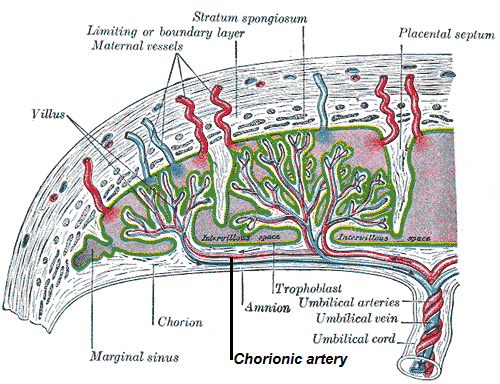 Chorionic artery: An image showing the chorionic villi and the maternal vessels.

During the tertiary stage (fifth to sixth week), the branches of the umbilical vessels grow into the mesoderm; in this way, the chorionic villi are vascularized. At this point, the villi contain trophoblast, mesoderm, and blood vessels.

Embryonic blood is carried to the villi by the branches of the umbilical arteries. After circulating through the capillaries of the villi, it is returned to the embryo by the umbilical veins. Chorionic villi are vital in pregnancy from a histomorphologic perspective and are, by definition, products of conception.

The placenta is a fetally derived organ that connects the developing fetus to the uterine wall to allow nutrient uptake, waste elimination, and gas exchange via the mother’s blood supply. The placenta begins to develop upon implantation of the blastocyst into the maternal endometrium.

The latter is a multinucleated, continuous cell layer that covers the surface of the placenta. It forms as a result of the differentiation and fusion of the underlying cytotrophoblast cells, a process that continues throughout placental development. The syncytiotrophoblast (otherwise known as syncytium) thereby contributes to the barrier function of the placenta. 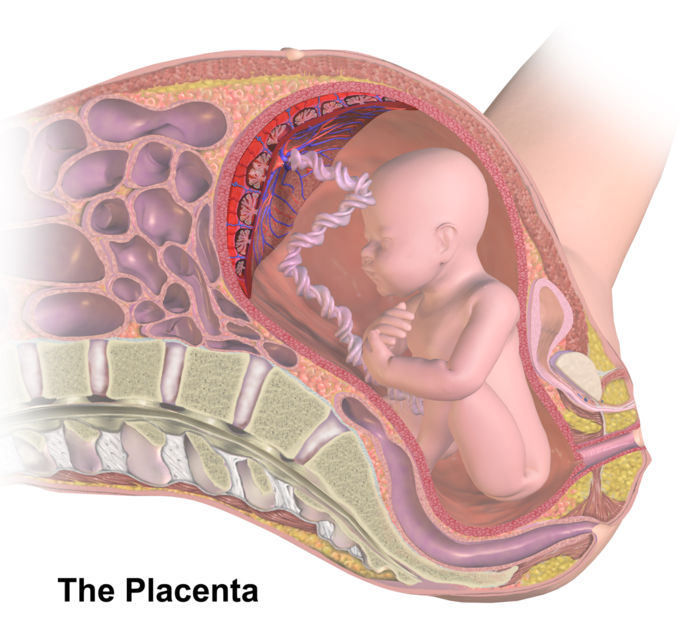 Placenta: Image illustrating the placenta and chorionic villi. The umbilical cord is seen connected to the fetus and the placenta.