The urinary organs include the kidneys, ureters, bladder, and urethra.

Outline the process of urine transport, storage, and elimination 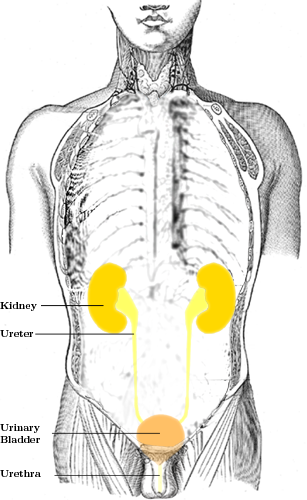 Urinary tract: The transport and removal of urine from the body follows the urinary tract.

The organs, tubes, muscles, and nerves that work together to create, store, and carry urine are referred to as the urinary system, which is another name for the renal system. The renal system filters the plasma of blood and regulates blood volume by excreting excess water in the form of urine. Urine transport follows a path through the kidneys, ureters, bladder, and urethra, which are collectively known as the urinary tract.

Urine is essentially water, ions, and secreted molecules that leave the collecting duct of the many nephrons of the kidney and flow into the ureters. The ureters are two tubes that drain urine from the kidneys to the bladder.

Each ureter is a muscular tube that drains into the bladder. Smooth muscle contractions in the walls of the ureters, over time, send the urine in small spurts into the bladder, the organ where urine is stored before it can be eliminated.

The bladder is a hollow muscular organ shaped like a balloon. It sits in the pelvis and is held in place by ligaments attached to other organs and the pelvic bones. The bladder stores urine until enough of it accumulates for removal from the body. It swells into a round shape when it is full and gets smaller when empty.

If the urinary system is healthy, the bladder can hold up to 16 ounces (2 cups) of urine comfortably for 2 to 5 hours. Circular muscles called sphincters help keep urine from leaking. The sphincter muscles close tightly, like a rubber band, around the opening of the bladder into the urethra, the tube that allows urine to pass outside the body.

Nerves in the bladder are stimulated as the bladder fills with urine and becomes larger, which in turn stimulates the need to urinate. When you urinate, the brain signals the bladder muscles to tighten, squeezing urine out of the bladder.

At the same time, the brain signals the sphincter muscles to relax. As these muscles relax, urine exits the bladder through the urethra, and leaves the body through an opening in the genital region that contains the urethra. When all the signals occur in the correct order, normal urination occurs, removing urine from the body.

The ureters are two tubes that drain urine from each of the kidneys into the bladder.

The ureters are tubes made of smooth muscle fibers that propel urine from the kidneys to the urinary bladder. In the adult, the ureters are usually 25–30 cm (10–12 in) long and 3–4 mm in diameter. The ureter is one of the essential organs of urinary tract that controls urine transport.

The ureters are two tubes that are made out of smooth muscle and transitional epithelial tissues, which are a type of epithelial tissue that may either be columnar or squamous. Each kidney has its own ureter through which urine drains into.

The ureters are long tubes that have a few points of constriction, where obstructions are more common. The ureters receive a blood supply from a few different major arteries including the renal and illiac artery derivatives, and have a relatively dense nerve supply as well.

Muscles in the walls of the ureters send the urine in small spurts into the bladder, in a process called peristalsis. After the urine enters the bladder from the ureters, small folds in the bladder mucosa act like valves to prevent the backward flow of the urine; these are called the ureteral valves. The ureteral valves function similarly to the semilunar valves in the veins of the body, but are structurally different, consisting of transverse mucosal epithelial folds.

Kidney stones and cancer are common diseases of the ureter. A kidney stone can move from the kidney and become lodged inside the ureter, which can block the flow of urine, as well as cause a sharp cramp in the back, side, or lower abdomen. The affected kidney could then develop hydronephrosis, should a part of the kidney become swollen due to blocked flow of urine.

Kidney stones are very common and are usually clumps of aggregated minerals that are most often found at the constriction points in the ureter. Ureter cancer is often due to a malignant transformation of of the transitional epithelial tissue, which is more vulnerable to developing cancer cells compared to other tissues.

The urinary bladder is a hollow, muscular, and distendible or elastic organ that sits on the pelvic floor.

Summarize the features and function of the urinary bladder

The bladder is a hollow, sac-like organ made of transitional epithelium, similar to the ureter that feeds into it. The ureters enter the bladder diagonally from its dorsolateral floor in
an area called the trigone, which is a triangle-shaped anatomical region. The urethra exits at the
lowest point of the triangle of the trigone. 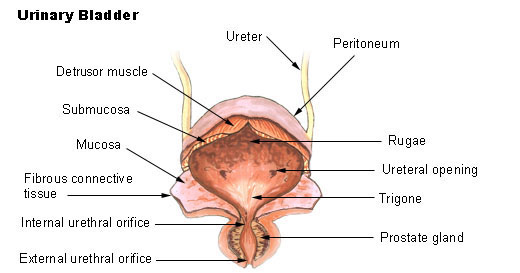 When the bladder fills with urine stretch receptors send nerve impulses to the spinal cord, which then sends a reflex nerve impulse back to the internal sphincter valve at the neck of the bladder that causes it to relax and allow the flow of urine into the urethra. The internal urethral sphincter is involuntary and controlled by the autonomic nerves.

The bladder has a minor temperature regulation function since some heat may leave the body in the form of urine. A normal bladder empties completely upon a complete discharge, otherwise it is a sign that its elasticity is compromised; when it becomes completely void of fluid, it may cause a chilling sensation due to the rapid change of body temperature.

The urinary bladder usually holds 300–350 ml of urine. As urine accumulates, the walls of the bladder thin as it stretches, allowing the bladder to store larger amounts of urine without a significant rise in internal pressure of the bladder.

The urethra is a muscular tube that connects the bladder with the outside of the body and removes urine from the body.

The urethra is a tube that connects the urinary bladder to the genitals for the removal of fluids from the body. The external urethral sphincter is a striated muscle that allows voluntary control over urination by controlling the flow of urine from the bladder into the urethra. 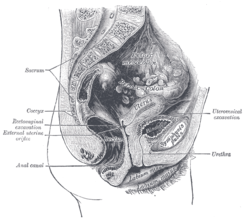 In females, the urethra is shorter relative to males, and emerges above the vaginal opening. Its lining is composed primarily of non-keratinized stratified squamous epithelium that becomes transitional near the bladder. The urethra consists of three layers of tissues:

The urethral sphincter  separates the bladder from the urethra. Somatic (conscious) innervation of the external urethral sphincter is supplied by the pudendal nerve, which allows the sphincter to open and close. As the urethra is shorter in females relative to males, they are more vulnerable to bacterial urinary tract infections.

In males, the urethra travels through the penis and carries semen as well as urine. Semen does not flow through the bladder or the rest of the urinary tract, instead it is a fluid made of sperm cells and other fluids that passes through a few different glands from the testes to the urethra through the vas deferens. Aside from semen, and the male urethra’s greater length, it is structurally similar to the female urethra. 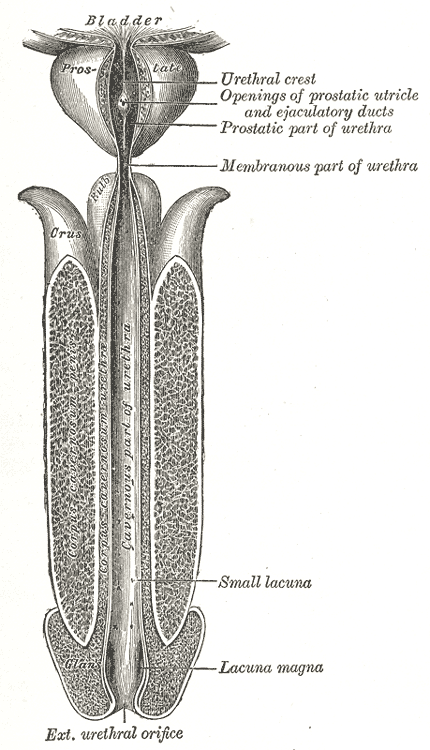 Male urethra: A detailed view of the male urethra.

Micturition is the ejection of urine from the urinary bladder through the urethra to the outside of the body.

Micturition, also known as urination, is the ejection of urine from the urinary bladder through the urethra to the outside of the body. In healthy humans the process of urination is under voluntary control. In infants, elderly individuals, and those with neurological injury, urination may occur as an involuntary reflex.

Physiologically, micturition involves the coordination of the central, autonomic, and somatic nervous systems. The brain centers that regulate urination include the pontine micturition center, the periaqueductal gray, and the cerebral cortex, which cause both involuntary and voluntary control over micturition.

In males, urine is ejected through the penis, and in females through the urethral opening. Due to sexual dimorphism, and the positions where the urethra ends, males and females often use different techniques for urination. Micturition consists of two phases: 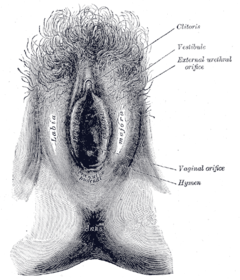 Many males prefer to urinate standing. In females, the urethra opens straight into the vulva. Because of this, the urine often does not exit at a distance from the body and is therefore seen as harder to control.

The micturition reflex causes bladder contraction during voiding, through a neural pathway. This reflex may lead to involuntary micturition in individuals that may not be able to feel the sensation of urinary urge, due to the firing of the stretch receptors themselves.

Waste Management in Other Body Systems

In addition to the kidneys, the liver, skin, and lungs also have important roles in the excretion of waste from the body.

Besides the renal system, many other organs and body systems are directly involved in the excretion of waste products. These other systems are responsible for the elimination of the waste products of the metabolism, as well as other liquid and gaseous wastes, but also provide other critical functions.

The lungs: The lungs are responsible for the removal of gaseous waste from the body.

Similar to renal clearance, these other organs have a clearance rate of their own, and also forms a part of total body clearance. The skin, lungs, and liver are the main waste removal organs outside of the non-renal system; however, their ability to remove wastes is generally less than that of the renal system.

The liver has many vital functions, including a role in digestion, protein synthesis, and nutrient and vitamin storage. The liver also plays an important function in the management of body waste. It acts as a detoxification system for the body, processing and neutralizing drugs and toxins.

The liver is involved in the breakdown and recycling of red blood cells, including the removal of bilirubin from the body by secreting it into the bile, which then functions as a fat emulsifier in the digestive system.

Additionally, the liver is involved in the removal of toxic ammonia from the body by converting it to non-toxic urea, which is then excreted by the kidneys and put into urine during tubular secretion. While the liver may breakdown or neutralize waste in a different and safer form for the body, it doesn’t directly remove the waste from the body.

Skin has sweat glands that secrete a fluid waste called perspiration. Perspiration, or sweat, is a fluid consisting primarily of water, as well as various dissolved solid wastes, that is excreted by the sweat glands. The sweat glands remove a bit of excess water and salts, and also serve the function of cooling the body during thermoregulation.

The lungs are responsible for the removal of gaseous waste from the body. Carbon dioxide is a toxic byproduct of cellular respiration. The lungs remove carbon dioxide from the bloodstream during ventilation, exchanging it for oxygen. This function is essentially important for regulating blood pH, since blood acidity is directly related to the concentration of carbon dioxide dissolved in carbonic acid in the blood stream. Excreting more carbon dioxide waste will reduce the acidity of blood.