Burmese art has been influenced primarily by Theravada Buddhism, with additional influences from India, Thailand, and China.

Discuss the art and architecture of the Burmese Pyu culture, the Pagan Empire, the Innwa style of the Ava Kingdom, the Mandalay style of the Konbaung dynasty, and the Shan style

The Republic of the Union of Myanmar, also known as Burma, is a sovereign state in Southeast Asia bordered by Bangladesh, India, China, Laos, and Thailand. Both the names “Burma” and “Myanmar” are derived from the name of the Bamar ethnic group. The name Burma has been in use in English since the 18th century; however in 1989, the country’s military government officially changed the country’s name from Burma to Myanmar. The renaming remains a contested issue, and many political and ethnic opposition groups and countries continue to use “Burma” because they do not recognize the legitimacy of the ruling military government. Burma continues to be used in English by the governments of many countries, such as Australia, Canada, and the United Kingdom. Official United States policy retains Burma as the country’s name, although both are sometimes used interchangeably.

Burmese art has been influenced primarily by Theravada Buddhism and the culture of the Mon people, with additional influences from India, Thailand, and China. Themes are commonly drawn from Buddhist and Hindu cosmology and myths. Burma is particularly renowned for its richness of Buddhist architecture, and is justifiably called “The Land of Pagodas ,” as Buddhist monasteries and gilded pagodas dot the landscape.

Buddhist art and architecture began to flourish in Burma under the Pyu city-states (2nd century BCE—mid-11th century CE). Pyu culture was heavily influenced by trade with India, and Buddhism was imported along with various Indian cultural and architectural concepts. While Theravada Buddhism was the primary religion of the Pyu kingdoms, archaeological finds indicate that Tantric Buddhism, Mahayana Buddhism, and Hinduism were also present. Figures from the Mahayana and Tantric pantheons were represented in Pyu art, including Avalokiteshwara (a bodhisattva who embodies compassion) and Tara (a female Tantric meditation deity ); Hindu deities, including the Hindu holy trinity of Brahma, Vishnu, and Shiva; and the goddess Lakshmi.

Starting from the 4th century CE, the Pyu began to build stupas and other religious buildings. The styles, ground plans, and construction techniques used are very similar to those of Amaravati and Nagarjunakonda in the Andhra region in present-day south-eastern India. By the 7th century, the tall cylindrical solid stupas, characteristic of the Pyu reign, had emerged in the city of Sri Ksetra. These solid stupas served as models for later pagodas.

The Pyu city-states declined in the early 9th century CE when a new group of ethnic Burmans from the north entered and raided their lands, establishing the Pagan dynasty and eventually overtaking the Pyu realm in the late 10th century. The Pagan state lasted from 849 until 1297 CE, laying the foundations for Burmese language and culture and the spread of Theravada Buddhism through all of Burma. The Pagan Empire is famous for its religious architecture: over 2,000 temples from the period survive to the present day. In addition to setting the model for subsequent Buddhist stupas and temples, the Pagan period also witnessed the production of beautiful jeweled statues of the Buddha.

Architecture during this time was built in two broad styles: the stupa-style solid temple inherited from the Pyu city-states, and the gu-style hollow temple. 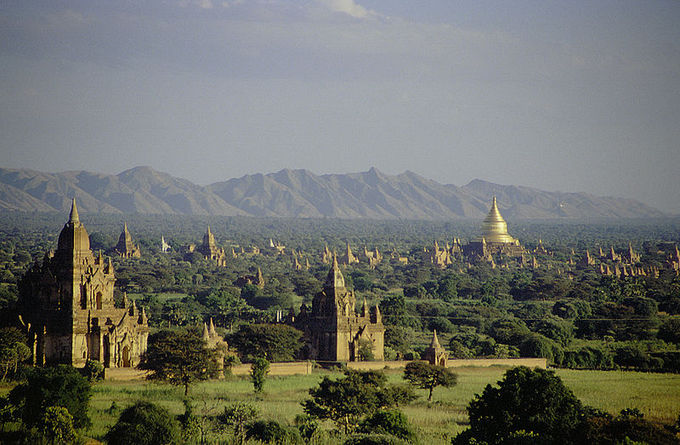 Pagan plains today: A view of the stupas in Bagan (formerly Pagan), the capital of the Pagan Empire.

During the Pagan period, the stupa developed into a longer, more cylindrical form than its Pyu predecessors at Sri Ksetra. By the 11th century, it had assumed a bell-like form, surmounted by a series of increasingly smaller rings placed one on top of the other and rising to a point. A lotus or banana-bud topped these rings. Three or four rectangular terraces served as the base for a pagoda, often decorated by a gallery of terracotta tiles depicting the Jataka tales . One of the earliest examples of Pagan temple architecture is the Shwezigon Pagoda in Nyaung-U. It is considered a prototype of Burmese stupas and consisted of a bell-shaped goldleaf-gilded stupa surrounded by smaller temples and shrines. 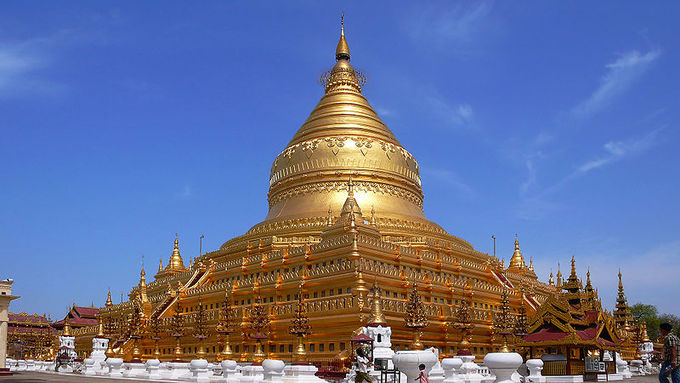 Shwezigon pagoda: Completed in 1102 CE, this is one of the earliest examples of Pagan stupa-style Buddhist temples. It is marked by a solid, bell-shaped stupa.

The hollow gu-style temple comes in two basic styles: the one-face design with one main entrance, and the four-face design with four main entrances. The primary features of these temples are pointed arches and vaulted chambers, both of which became larger and grander during the Pagan period. Vaulting was an innovation that developed independently in Pagan itself around the 11th century, and the masonry of these vaulted buildings is astonishingly perfect and durable. Another architectural innovation arising in Pagan is the Buddhist temple with the pentagonal floor in order to honor the Maitreya Buddha, a future Buddha foretold of in Buddhist mythology.

The Pagan Empire was succeeded by the Ava Kingdom, which ruled Upper Burma from 1364 to 1555 CE. Ava rule was marked by the popularization of the Innwa style of Buddha, in which the Buddha is depicted with large protruding ears, exaggerated eyebrows that curve upward, half-closed eyes, thin lips, and a hair bun that is pointed at the top. Ava statues of the Buddha are also usually portrayed in the bhumisparsha mudra , in which the figure is seated with the right hand reaching for the ground, palm facing inward.

The Innwa style continued to be popular in Burma until the end of the 18th century, when a markedly new style of Buddha image, the Mandalay style, emerged under the Konbaung dynasty (1752–1885). The face of the Buddha in the Mandalay style was natural and fleshy with realistically slanted eyebrows, slightly slanted eyes, thicker lips, and a round hair bun. These statues were portrayed wearing flowing, draped robes. Three postures were commonly depicted: reclining, standing, or sitting. Another common style of the Buddha image is the Shan style, inherited from the Shan people who inhabit the highlands of Burma. Buddhas in the Shan style have angular features, large and prominently-pointed noses, and small, thin mouths. 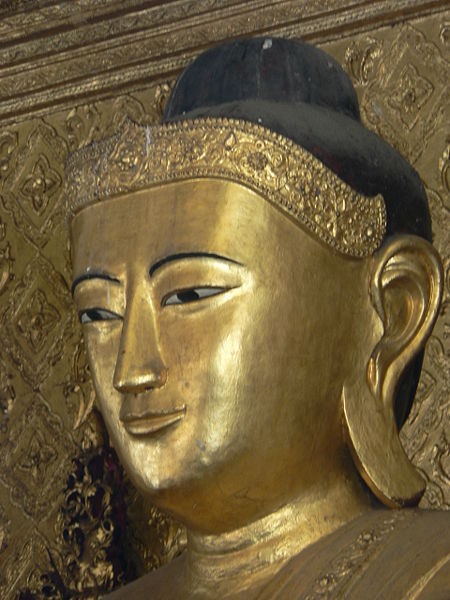 Mandalay-style Buddha statue, Shwedagon pagoda, Yangon, Myammar: This gilded statue of the Buddha has naturally slanted brows, slanted eyes, and a round hair bun characteristic of the Mandalay style.