Canadian Painting in the 20th Century

The Group of Seven and the Eastern Group of Painters are two important Canadian painting collectives founded in the early 20th century.

The Group of Seven

The Group of Seven was a group of Canadian landscape painters known for their large, brilliantly colored scenes of the Canadian wilderness. Believing that a distinct Canadian art could be developed through direct contact with nature, the Group of Seven initiated the first major Canadian national art movement.

The original members of the group were Franklin Carmichael, Lawren Harris, A. Y. Jackson, Frank Johnston, Arthur Lismer, J. E. H. MacDonald, and Frederick Varley. Tom Thomson (who died in 1917) and Emily Carr were also closely associated with the Group of Seven, though neither were ever official members.

In the 1930s, members of the Group of Seven decided to enlarge the club and formed the Canadian Group of Painters, made up of 28 artists from across the country. 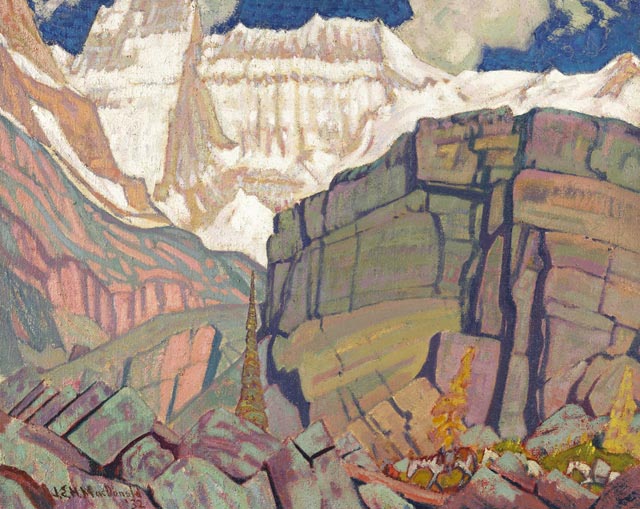 Mount Lefroy: James MacDonald was one of the founding members of Canada’s Group of Seven, considered by many to be the first uniquely Canadian artistic group and style of painting. 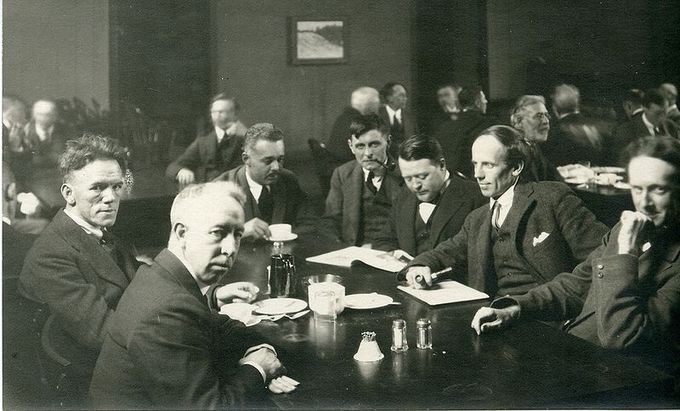 The Group of Seven: The Group of Seven aimed to develop the first distinctly Canadian style of painting. This image shows six of the Group of Seven, plus their friend Barker Fairley, sitting at a table in 1920. From left to right: Frederick Varley, A. Y. Jackson, Lawren Harris, Fairley, Frank Johnston, Arthur Lismer, and J. E. H. MacDonald.

The Eastern Group of Painters

Founded in 1938 in Montreal, Quebec, the Eastern Group of Painters included Montreal artists whose common interest was painting as a means to create art for art’s sake, as opposed to the espousal of a nationalist theory (which was the case with the Group of Seven).

By the late 1930s, many Canadian artists began resenting the quasi-national institution that the Group of Seven had become. Artists began rejecting the perspective that the efforts of a group of Ontario-based artists constituted a national vision or oeuvre, and many artists—notably those in Quebec—began feeling ignored and undermined.

In the 1920s, Kathleen Munn and Bertram Brooker independently experimented with abstract or non-objective art in Canada. Both artists viewed abstract art as a way to explore symbolism and mysticism as an integrated part of their personal spirituality.

As the Group of Seven was enlarged into the Canadian group of Painters in the 1930s, Lawren Harris left the group to also experiment with abstract forms and aimed to represent broad conceptual themes rather than landscapes. These individual artists indirectly influenced the following generation of artists who would come to form groups dedicated to abstract art after World War II.

Since the 1930s, Canadian painters have developed a wide range of highly individual styles. Emily Carr became famous for her paintings of totem poles, native villages, and the forests of British Columbia. Other noted painters include the landscape artist David Milne and the prairie painter William Kurelek, who painted in a similar style to that of American regionalism. 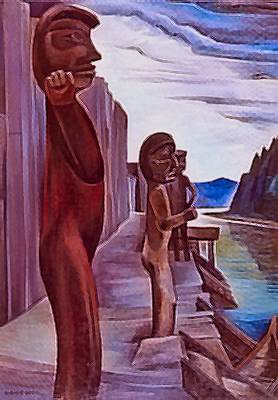 Blunden Harbor: Emily Carr became famous for her paintings of totem poles, native villages, and the forests of British Columbia in the early 20th century.